Tucked into a valley near Auckland’s Hobson Bay, this home by RTA Studio sees the gabled-roof vernacular of quintessential Kiwi state houses reinterpreted as a series of pavilions that house a family of five.
“Our clients actually lived here in an ex-state house prior to the build,” says project architect Michael Dalton. “It sat in the middle of the large section, and they were very short on space, so they were enthusiastic about the opportunity to utilise the land to its full potential.” 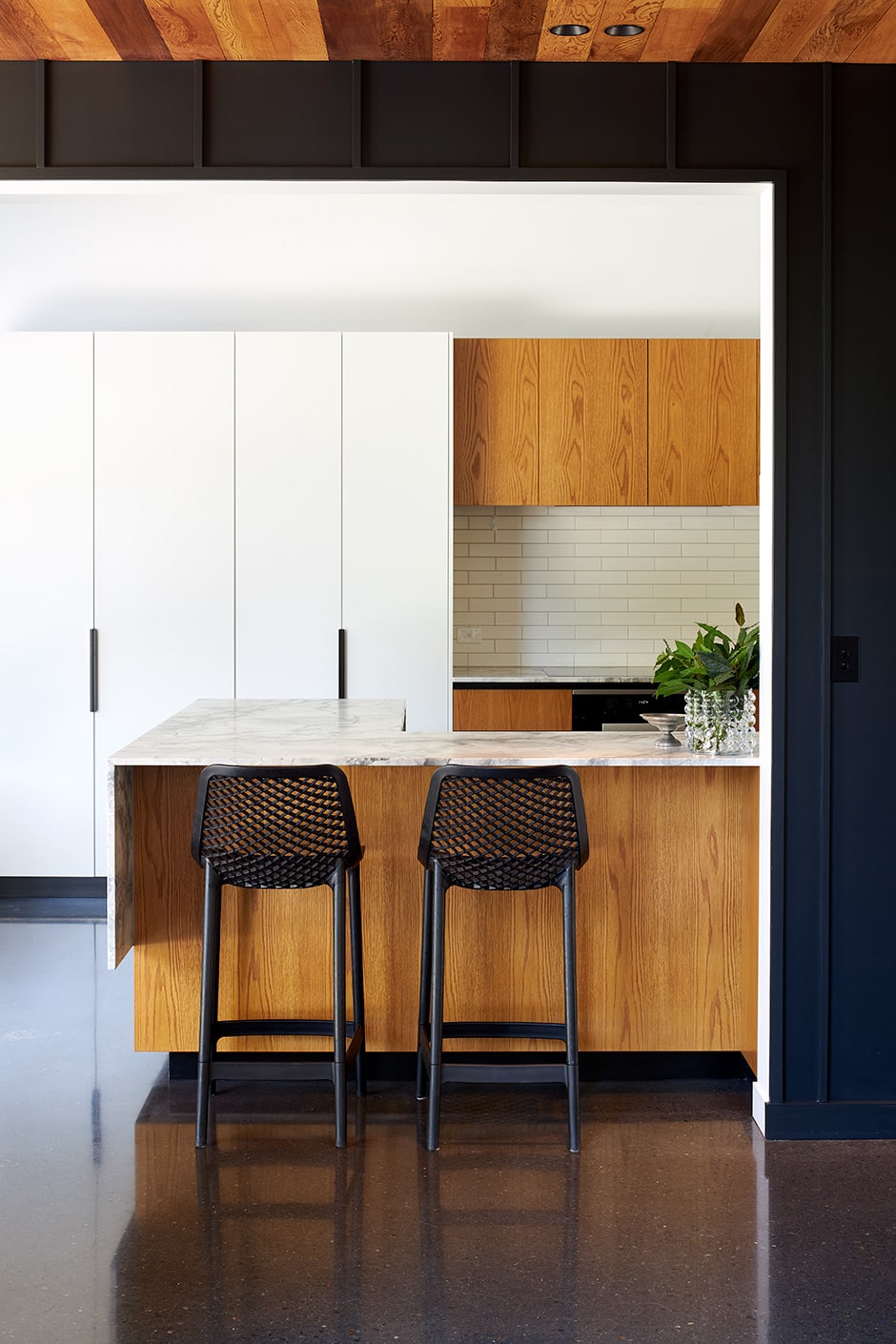 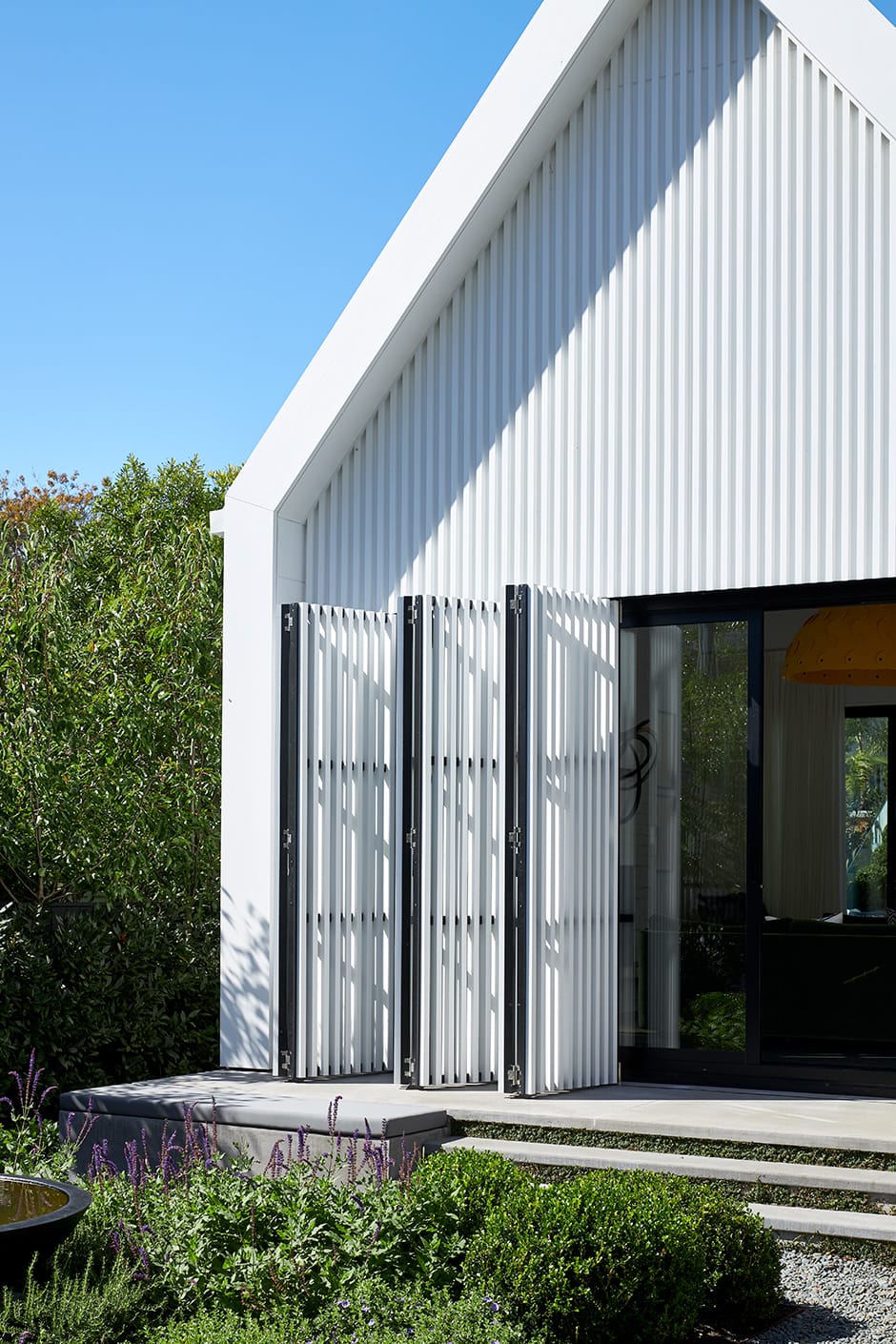 TOP Key materials used in the kitchen include crown-cut American white oak and white lacquer for the cabinetry, exposed aggregate concrete tinted with black oxide for the flooring and Calacatta marble for the benchtop. ABOVE Slatted screens over the streetfront stacker sliding doors by First Windows & Doors manage privacy and filter the late-afternoon sunlight. First Windows & Doors’ Metro Series ThermalHeart joinery was installed throughout the house for its superior insulation.

Taking their aesthetic cues from the street, the RTA team was inspired by the simplicity of the surrounding single-storey dwellings. Following suit, once the original home was removed, they took those familiar gabled forms and pushed, pulled and repeated them to create a five-bedroom dwelling that stretches from the front to the back of the property. 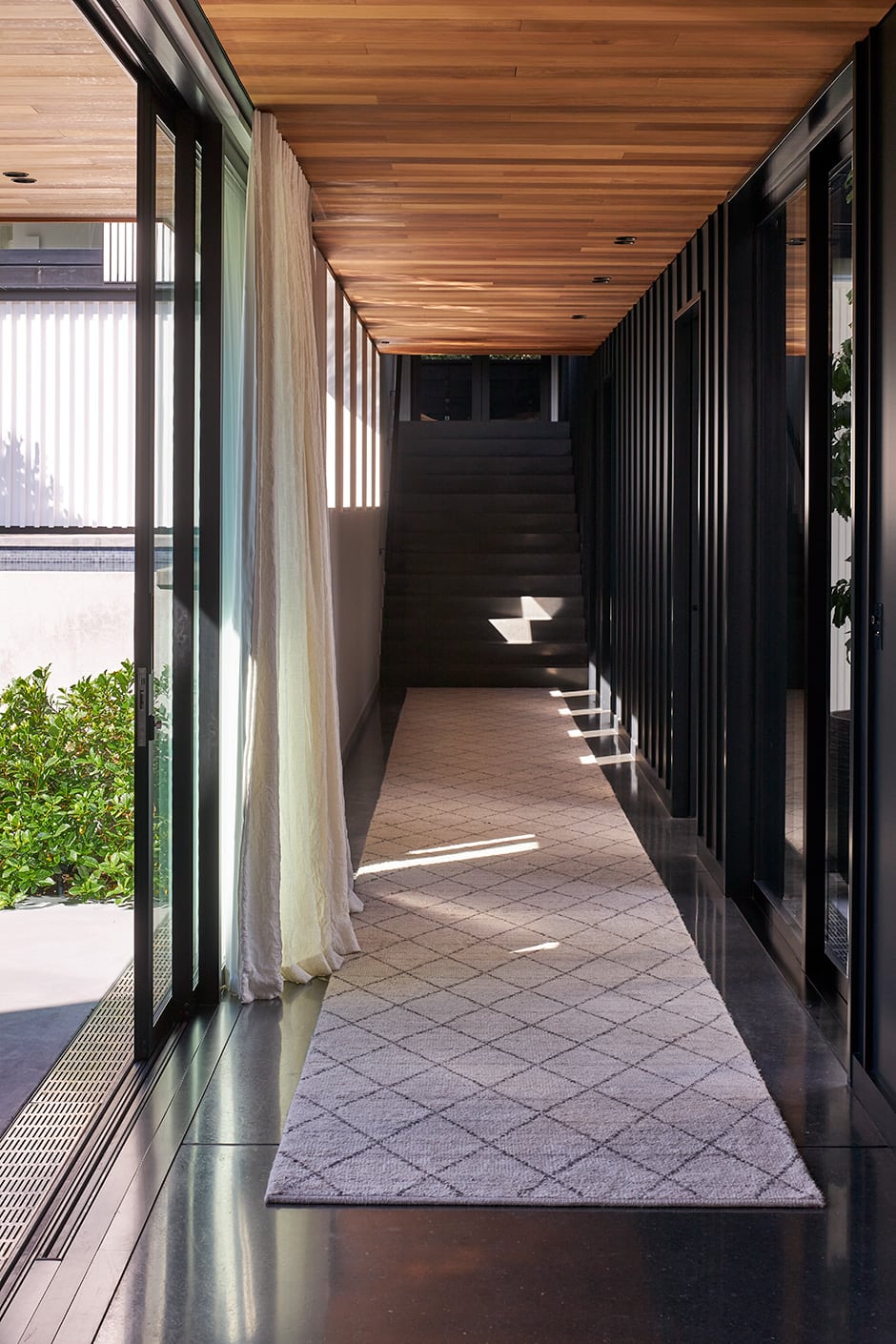 ABOVE The hallway is one of several circulation spaces that are designed to be enjoyed as much as the destination spaces are. Tall windows running the length of it let light dance across the walls and floor as the sun shifts throughout the day.

“Being in an urban environment, planning rules and height in relation to boundary are always a consideration, and this naturally puts emphasis on building in the middle of the site,” says Michael. “We created a single-level building to maximise the available space, and what really interested us was dealing with the scale of the building by splitting the gable to utilise the inside-outside connection and create a series of different volumes.” 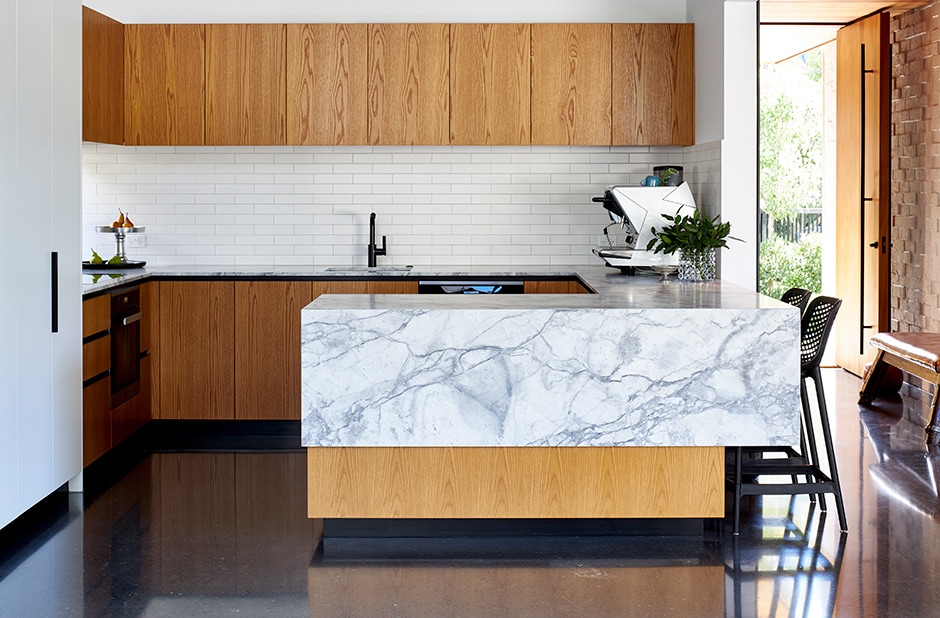 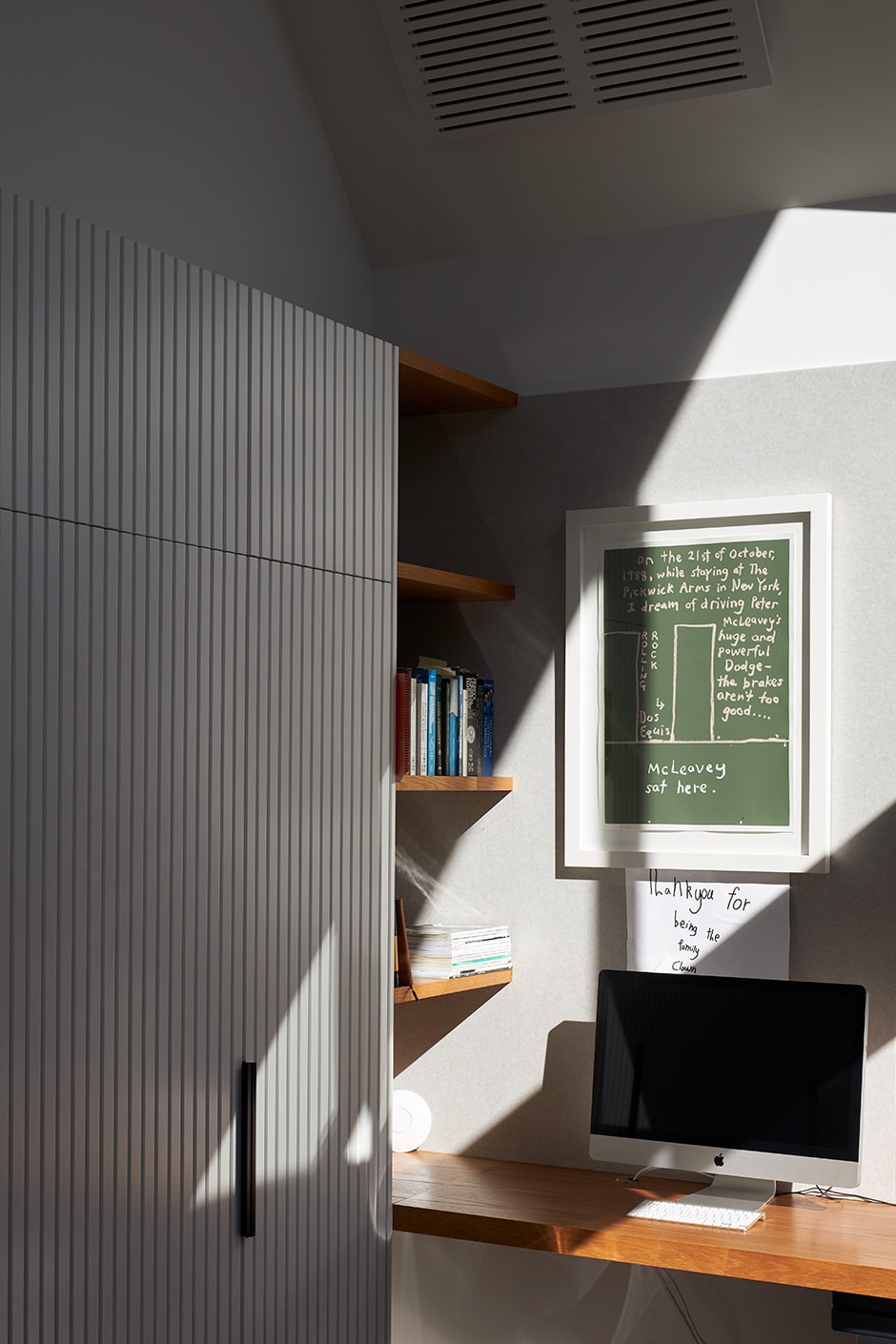 TOP The family loves to cook and are also big fans of having everything tucked away — this U-shaped kitchen expertly caters to both and contains the activity within the open-plan living space. Carlielle Kitchens crafted all the cabinetry in the home and also assisted with the design of the handsome storage cupboard pictured above. ABOVE Thanks to a pull-out bed, the office can double as a guest bedroom. Resene Half Sea Fog was used on the walls here and throughout the living spaces. Also on this wall is McLeavey Sat Here by John Reynolds.

Opting for several interconnected pavilions rather than a single voluminous form gave RTA the opportunity to explore courtyards as a hero feature of their design built by Ninety45, with the pavilions arranged around them for shelter and to allow sunlight into all parts of the house. The front door is located between two of the peaked structures and ushers you into a wide corridor below a flat, slatted-cedar ceiling. “This is the spine of the house,” says Michael. “Its generous size makes it a gallery-like space you can circulate through and filter off into different areas from.” 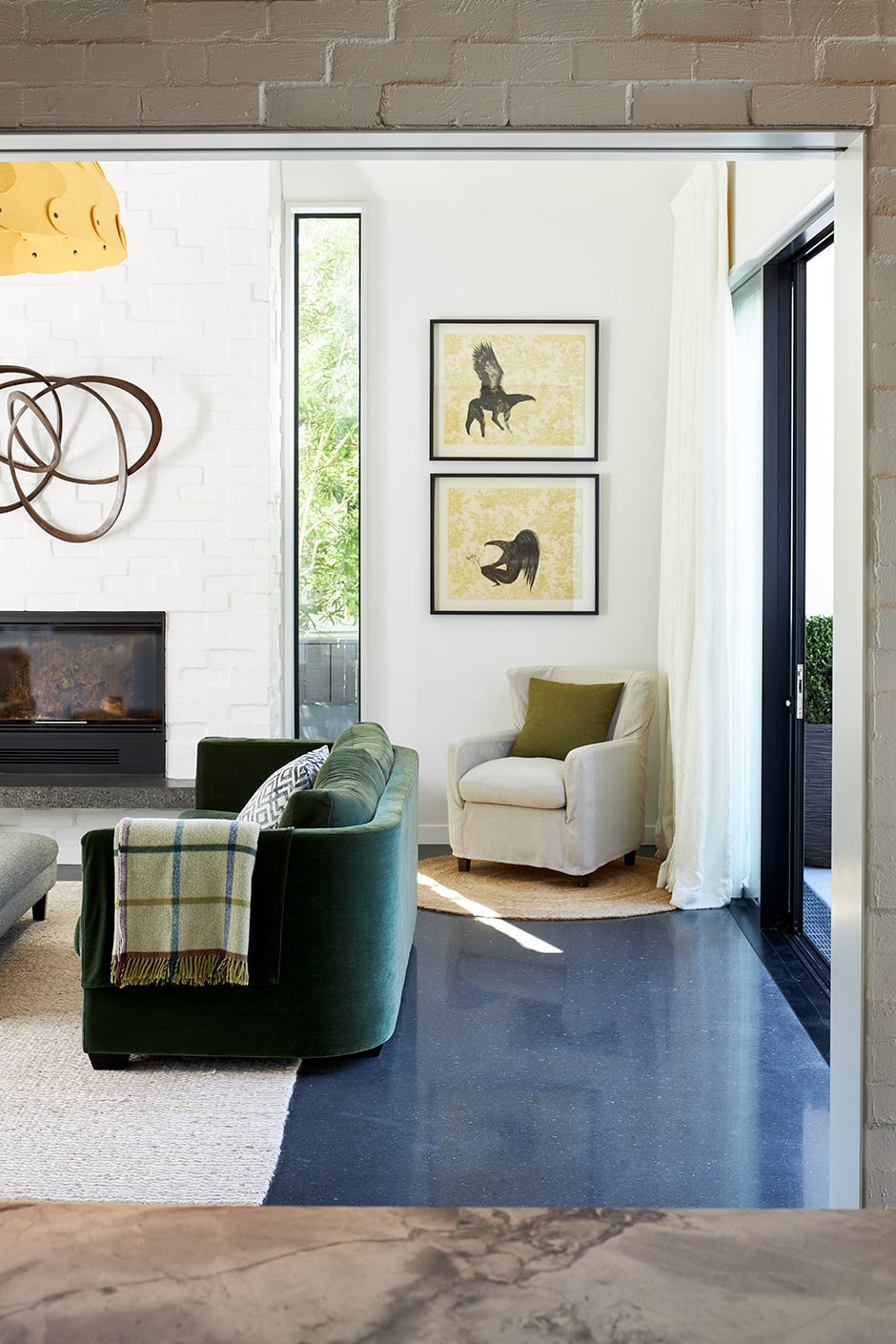 ABOVE Creative touches in this space include a Hush pendant light by David Trubridge and PLN Group, a sculpture by Ray Haydon, and lithographs Picnic 2 (top) and Picnic by Bill Hammond.They’re arranged on either side of a tall, narrow window that gives an artistic glimpse of greenery.

The section is longer than you can appreciate from the road and slopes steeply as it rises to the rear boundary. The split-level plan accommodates this incline, with the front of the home dedicated to public zones and the back reserved for private ones, the journey up the stairs to the bedrooms enhancing the sense of retreat. 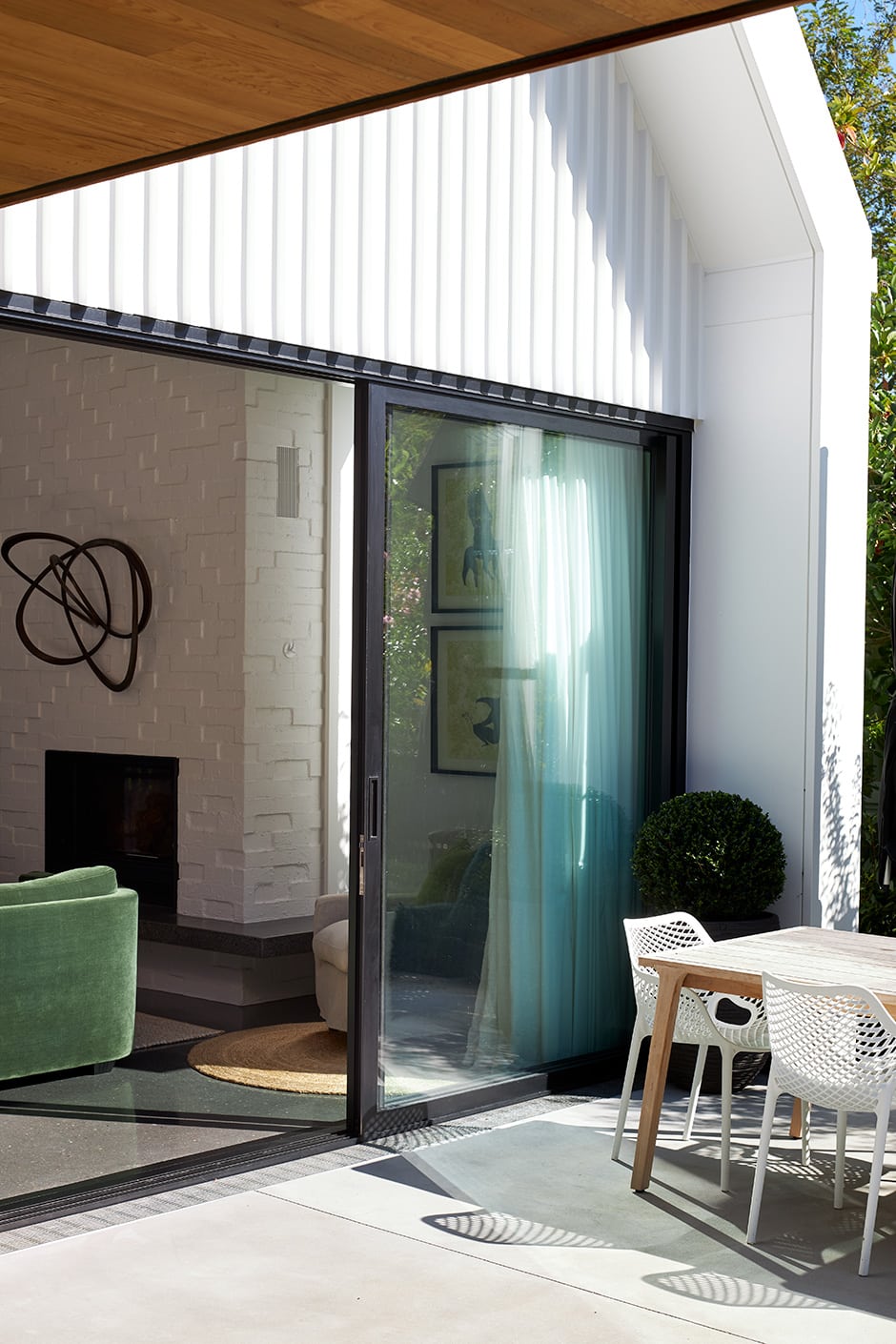 To boost the west-facing home’s energy-efficiency, RTA arranged multiple windows on the northern side to achieve solar gain. High-performance ThermalHeart joinery was selected to regulate this gain as well as heat loss for increased comfort year-round. “Designing all the gabled forms with large openings from First Windows & Doors really maximises the light while allowing for a breeze through the house as well,” says Michael. 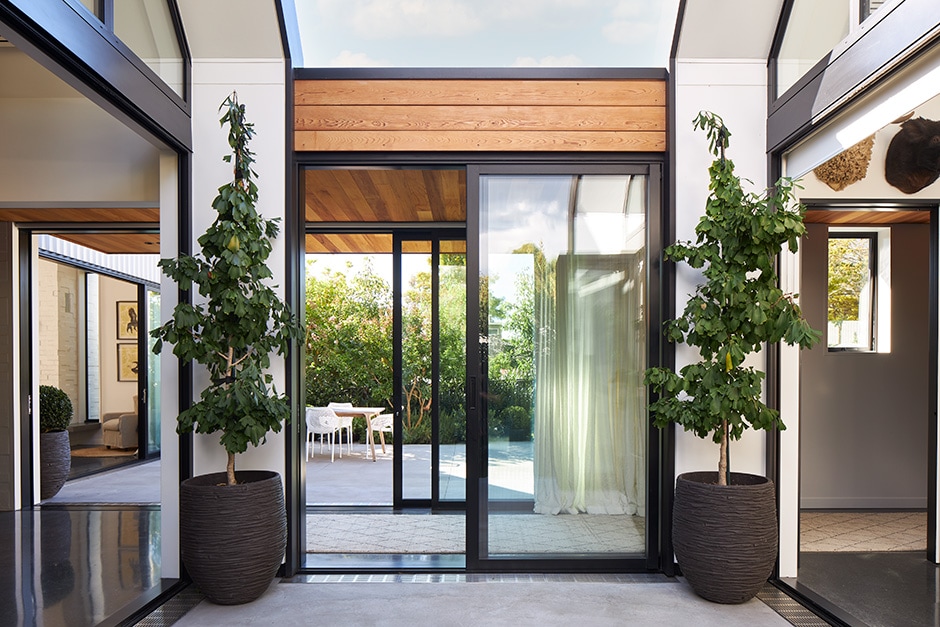 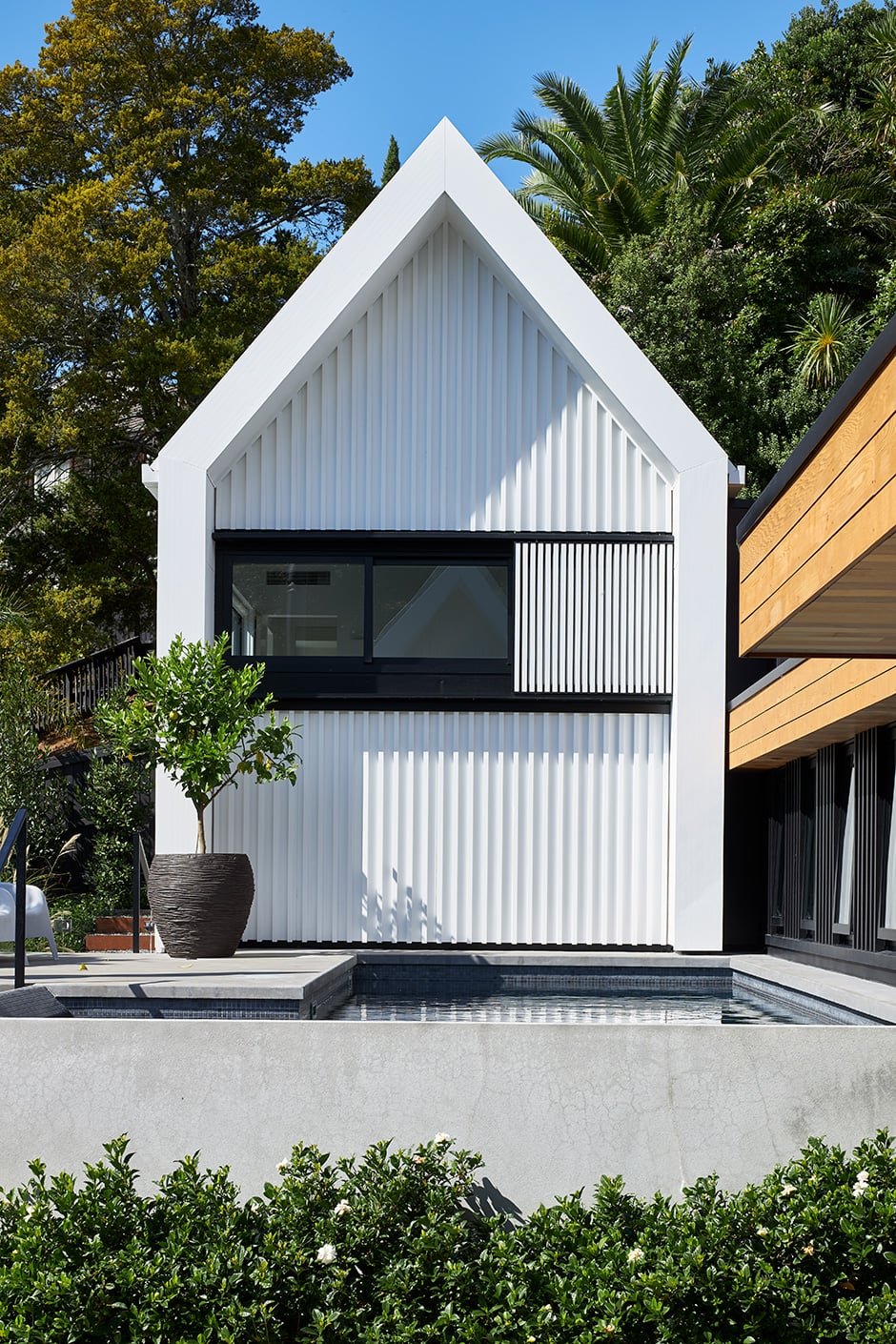 TOP The south-facing courtyard offers welcome respite from the heat in the height of summer. With stacker sliding doors on all sides, it also acts as an extension of the kitchen and dining area when the family’s entertaining. Like the other courtyards, it features saw-cut coloured-concrete pavers underfoot. ABOVE Housed in its own pavilion, the main bedroom is a real sanctuary. Echoing the front of the house, its façade pairs a slatted screen with Metro Series ThermalHeart sliding windows.

Stacker sliding doors bookend the living room, creating a wonderful sight line that extends from the leafy front courtyard to an internal courtyard that accommodates outdoor dining and an elevated pool, and leads towards the main bedroom further up the hill. “The house utilises cross-ventilation, but there are also some good active systems in here, so when you’re not able to use the passive ones, you’ve also got good insulation and underfloor heating,” says Michael. 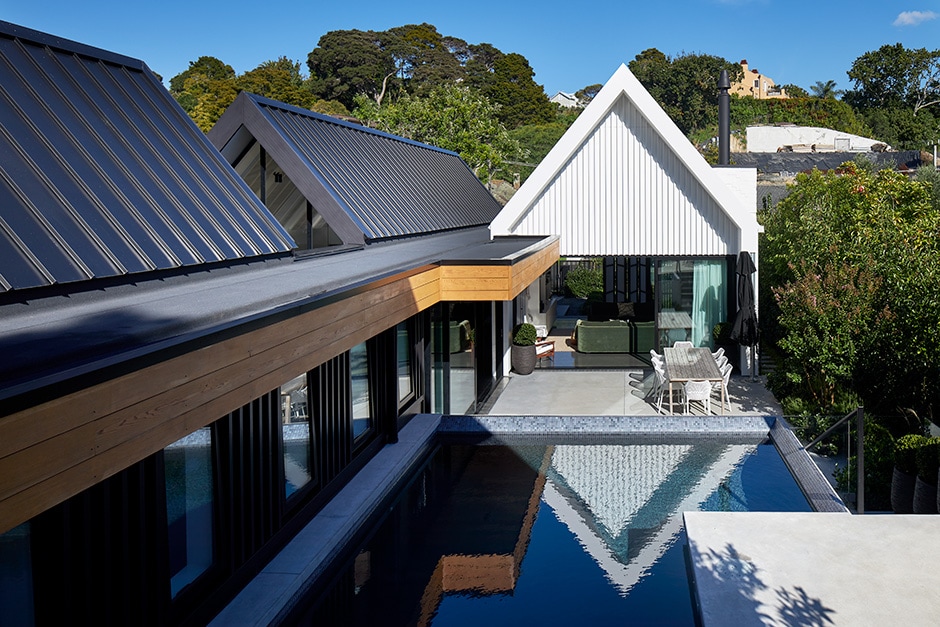 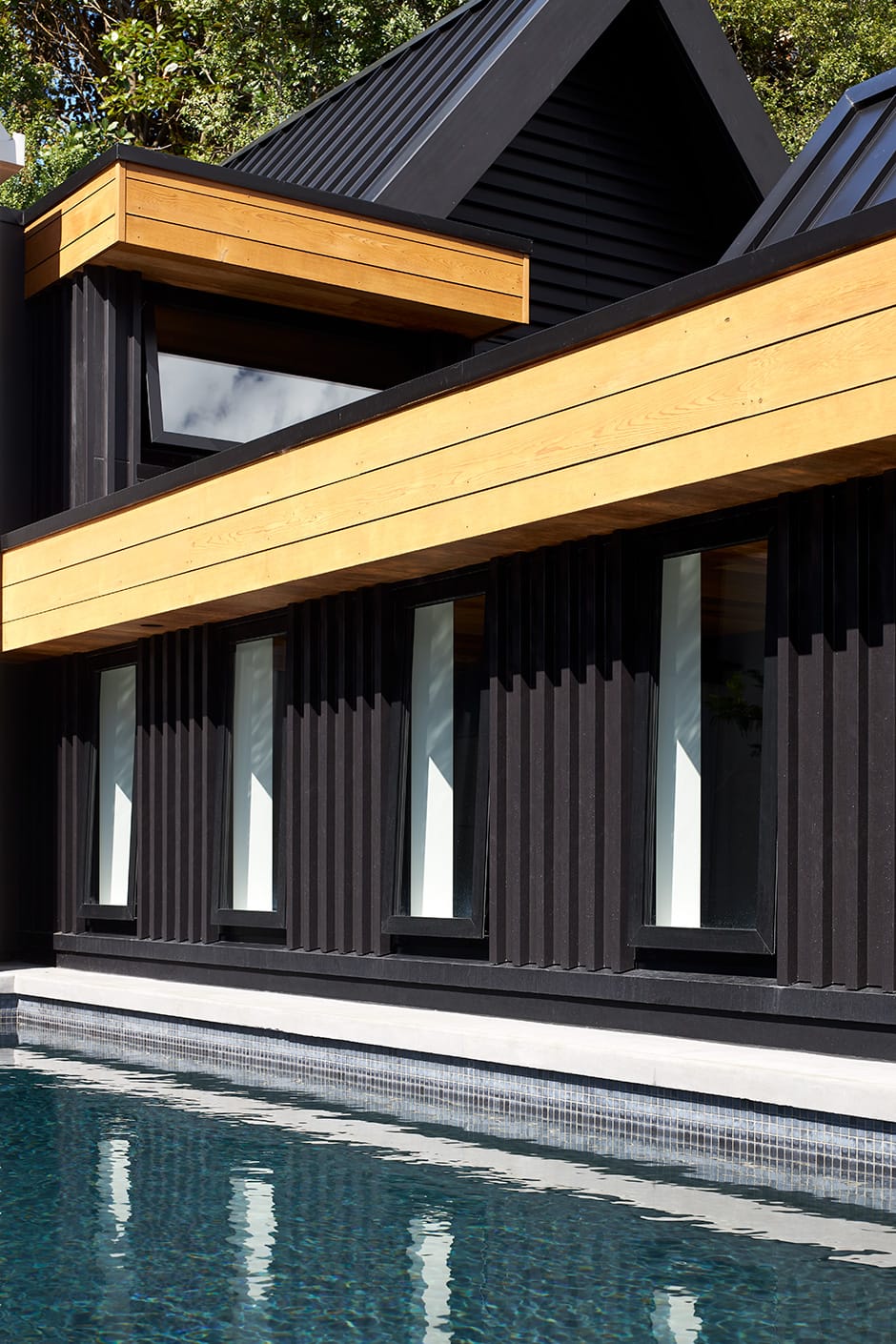 TOP The view towards the street from the main bedroom captures the reflection of the living space’s gable in the pool. ABOVE Architectural details such as the cedar overhangs on the north-facing windows along the hallway also help to control the amount of light entering the house.

Another big focus for the team was designing a low-maintenance home in which all the materials are robust and long-lasting. To this end, they chose to clad the pavilions with bagged, plastered bricks juxtaposed with board-and-batten timber in contrasting black and white on either side of the home’s spine. The bricks travel from the outside in, wrapping themselves around the fireplace in the living area.
“With open-plan, you can lose the comfort and intimacy achieved with a separate living space,” says Michael. “Here, you get a feeling of openness, as the lounge has a relationship with the dining and kitchen area through a large internal opening, but also has the ability to be completely closed off with hidden sliding doors.”
Indoor-outdoor flow is more than just a concept here; living takes place within, across and around the interconnecting spaces, allowing the family to use all areas of this home on any given day, in any given season. Linked to each other and the outside world, the pavilions are proving to be a beautiful backdrop to a new-and-improved life as they know it.