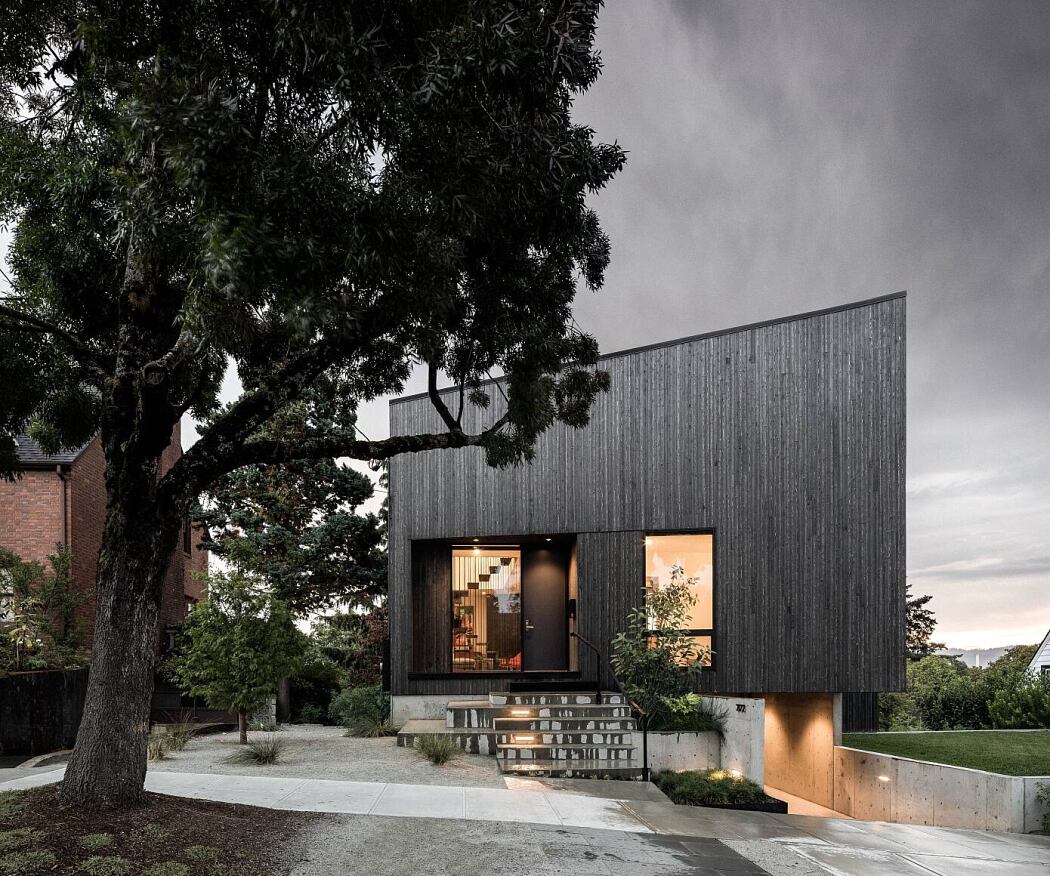 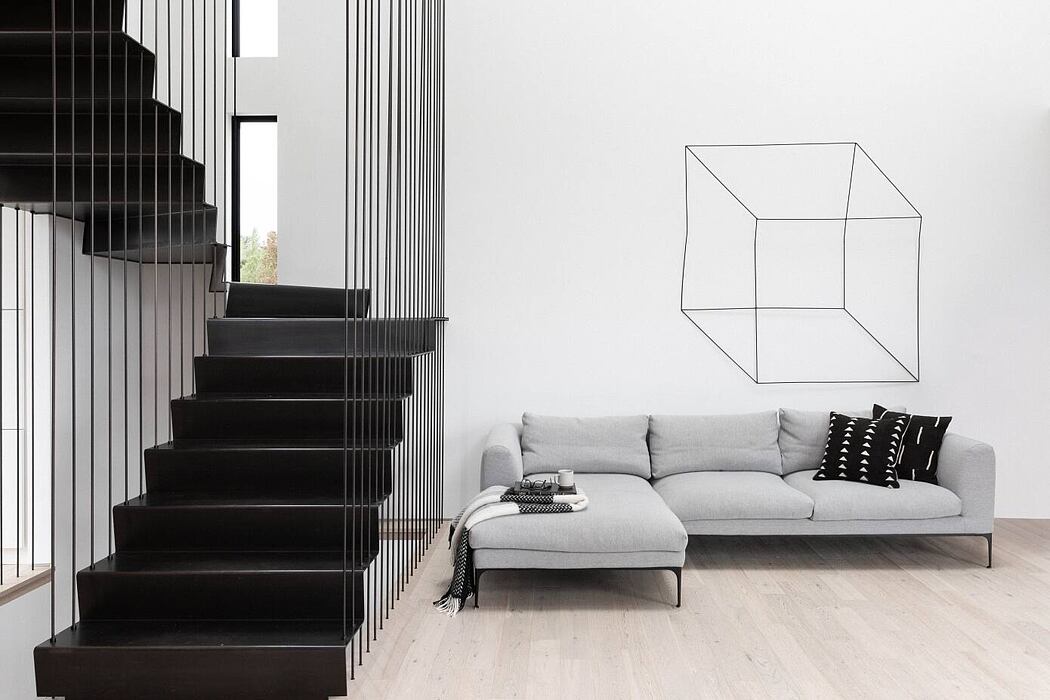 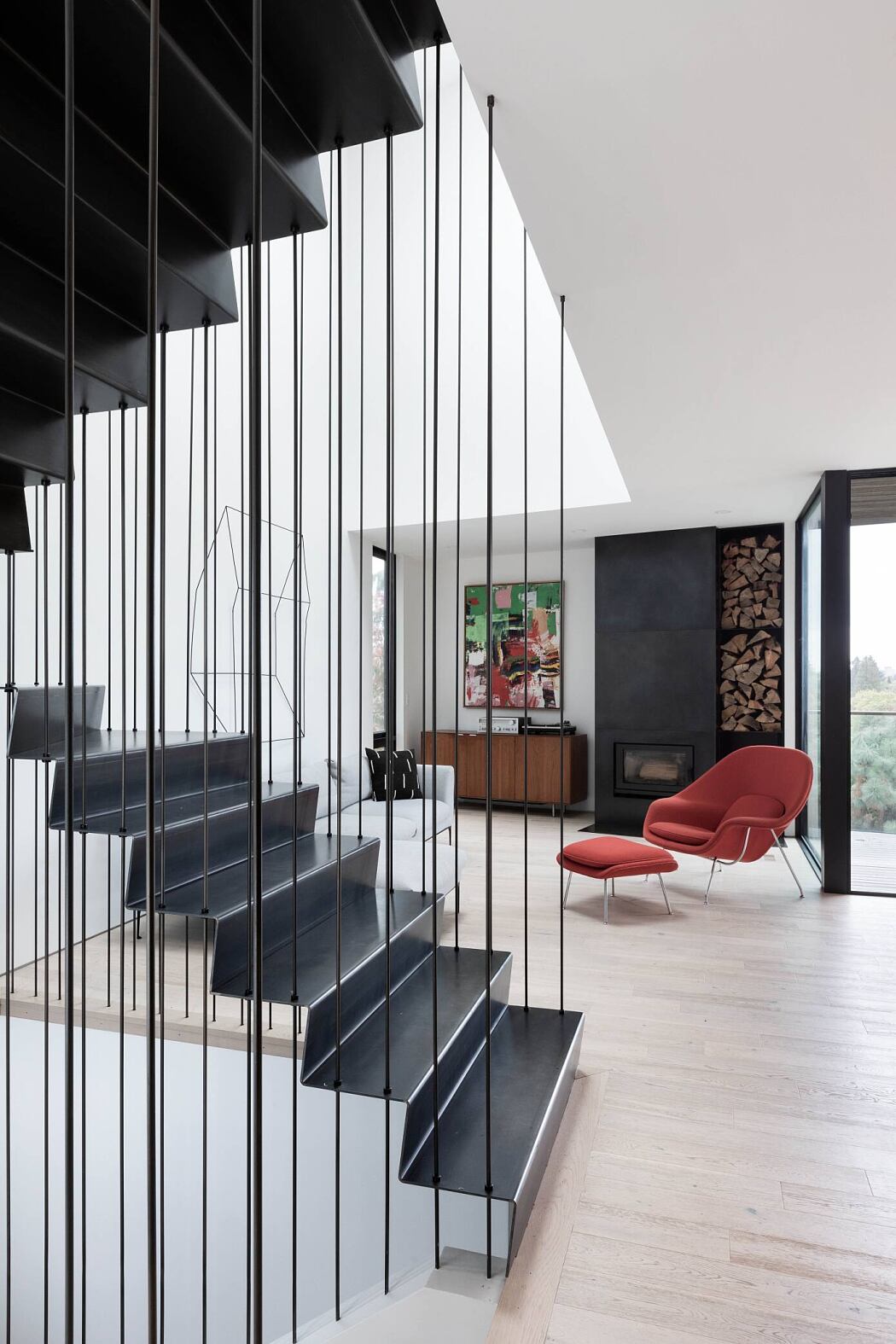 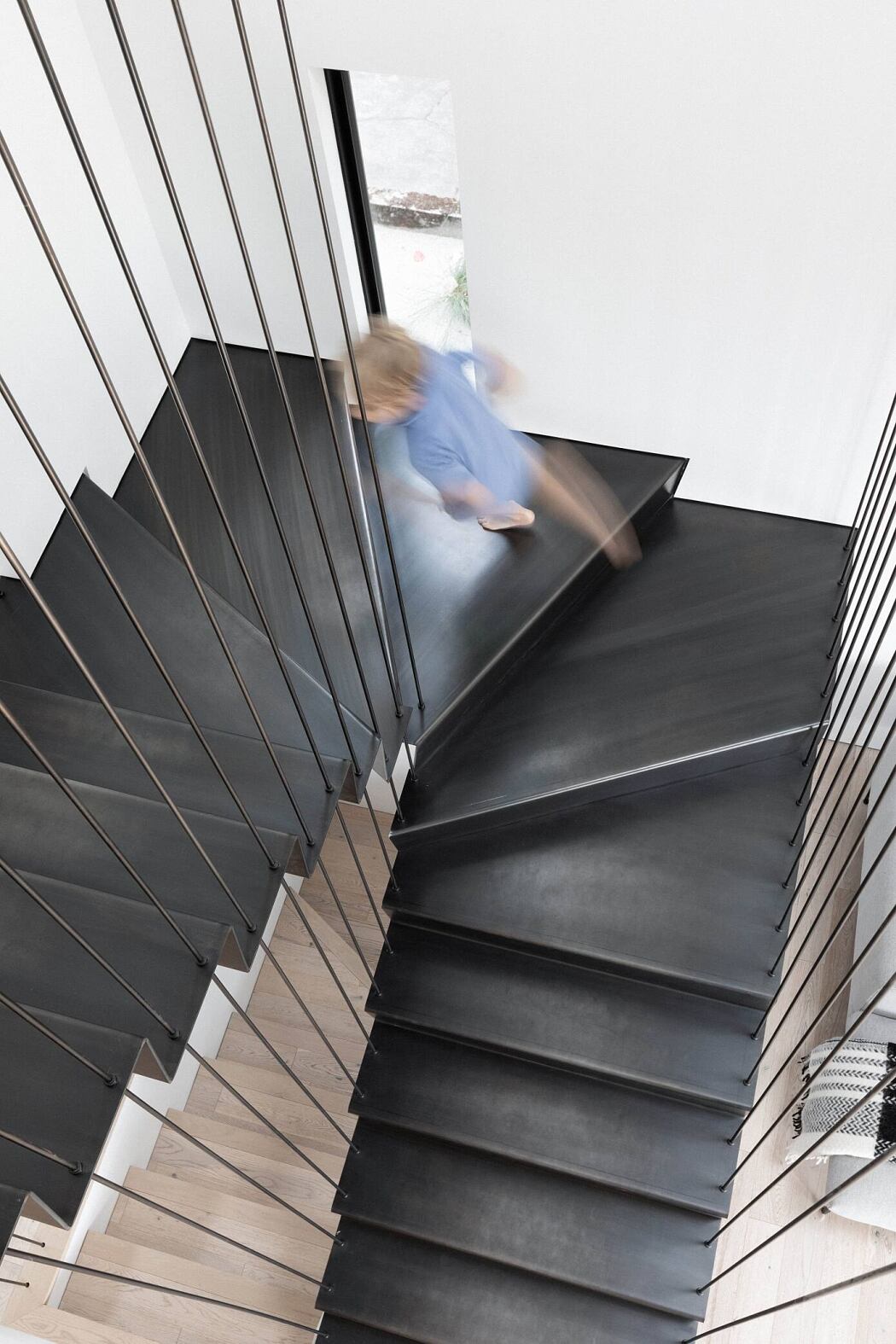 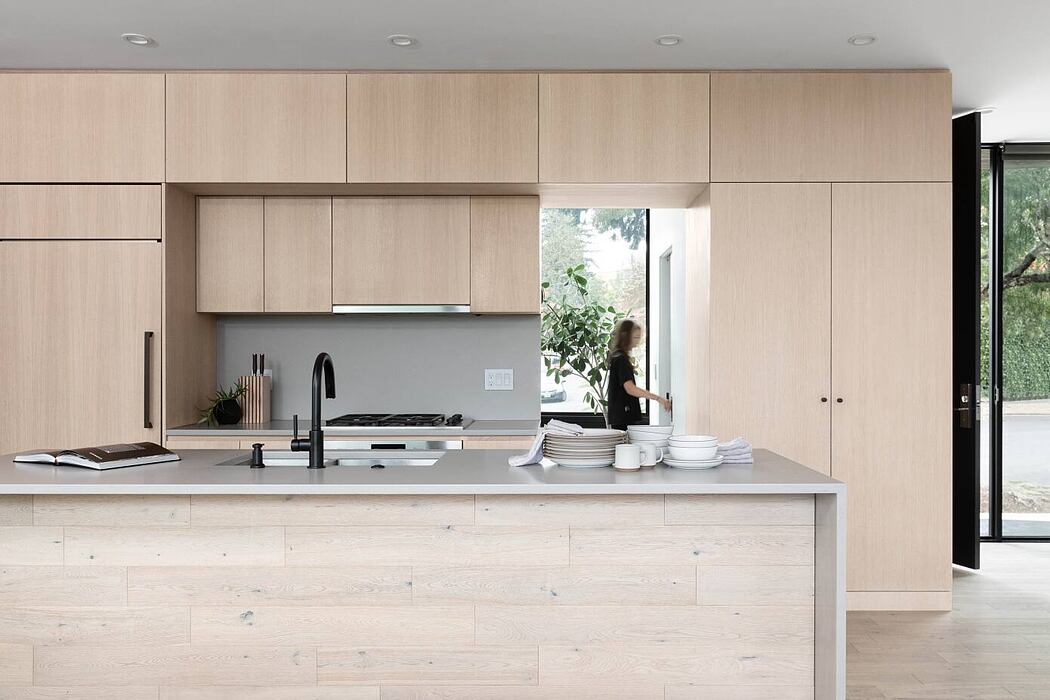 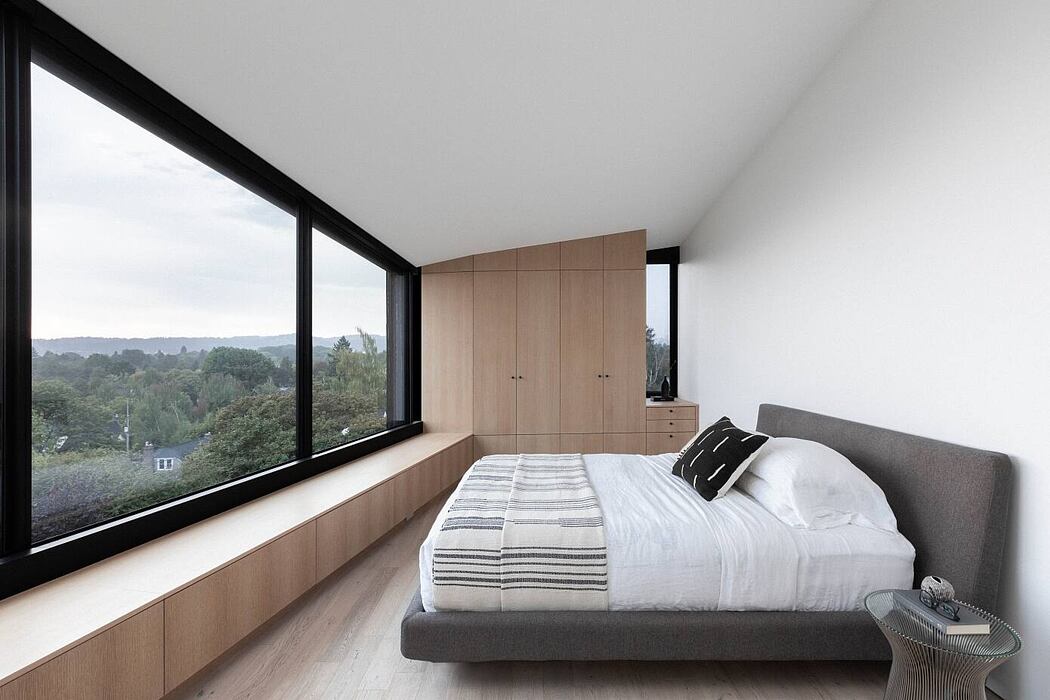 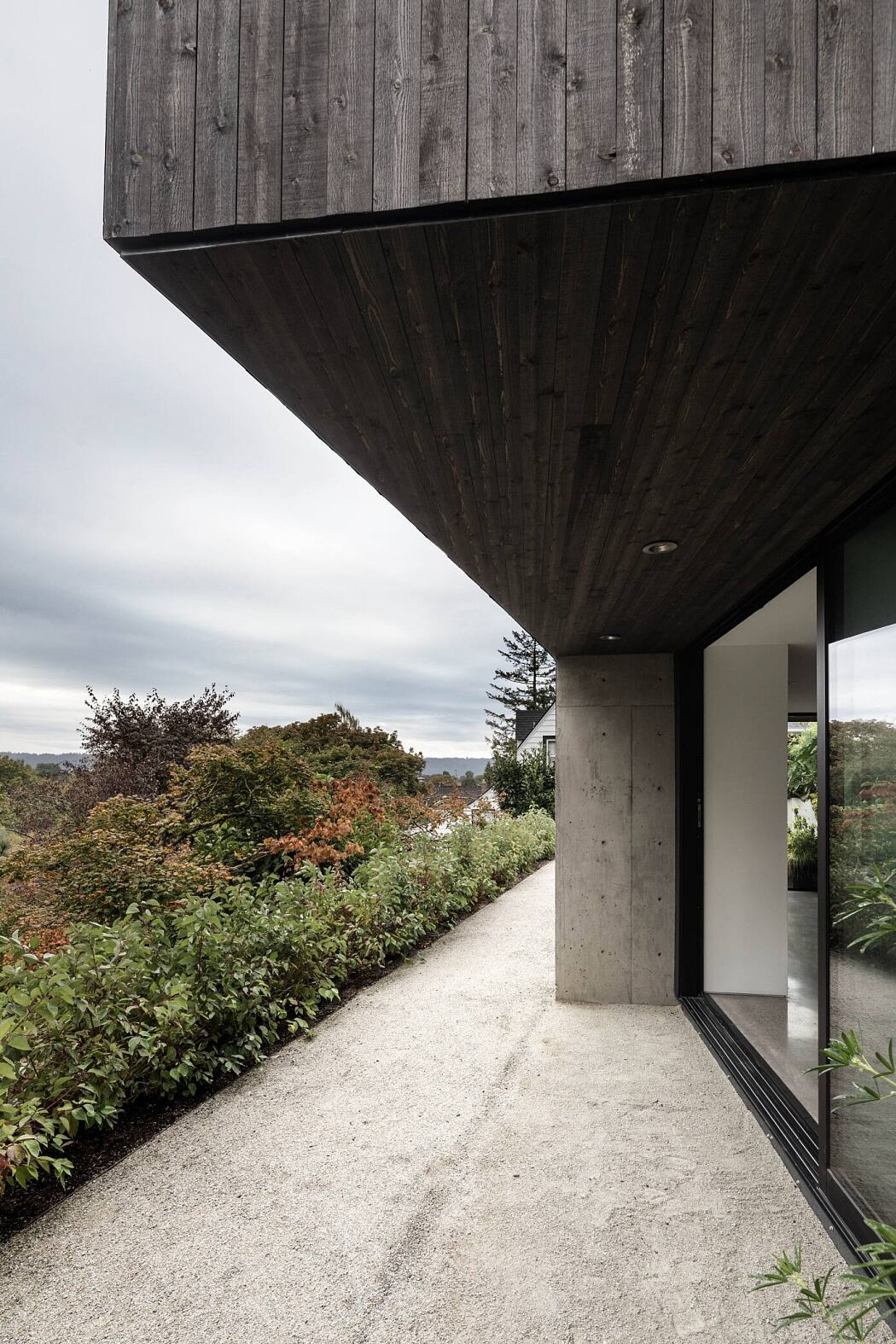 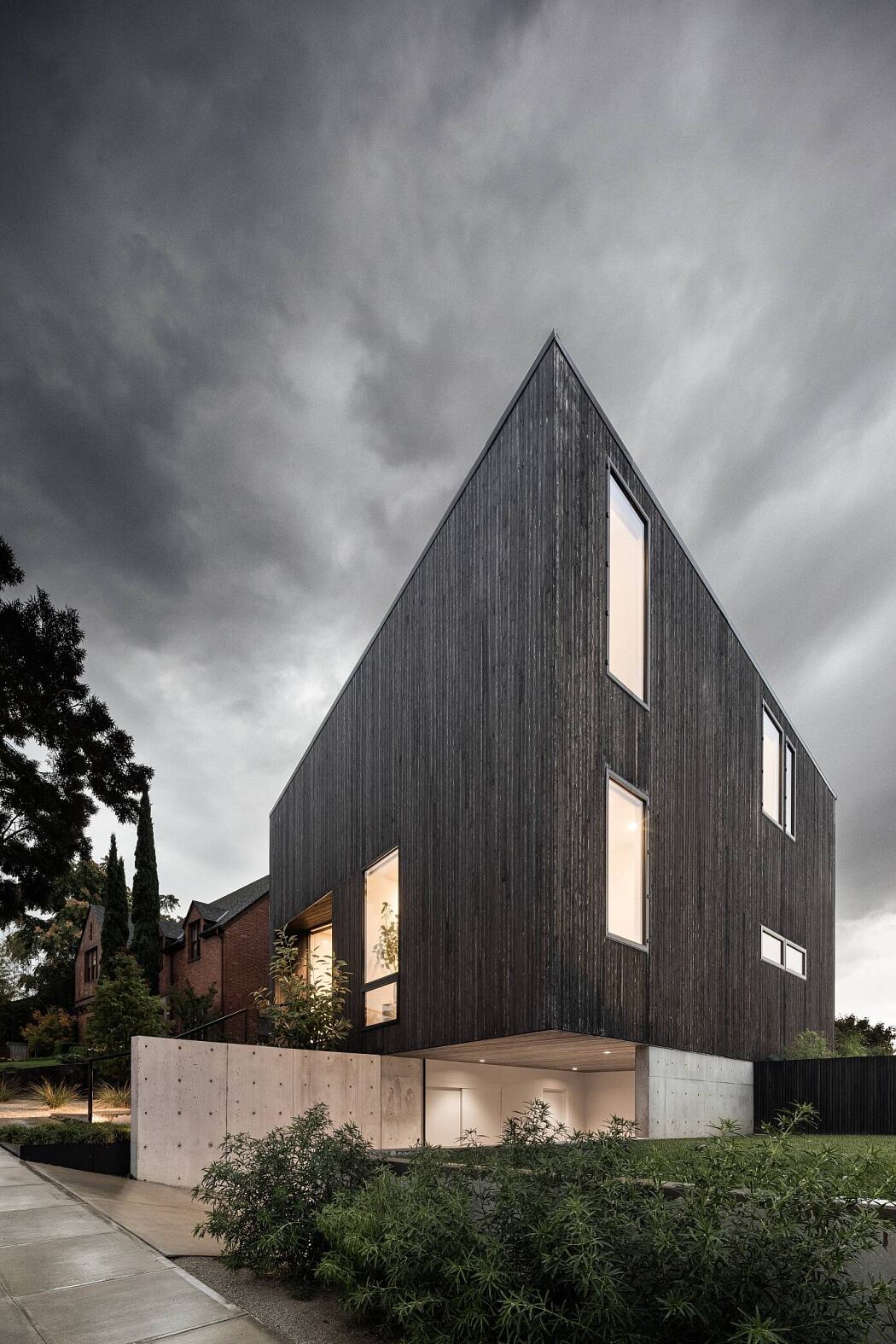 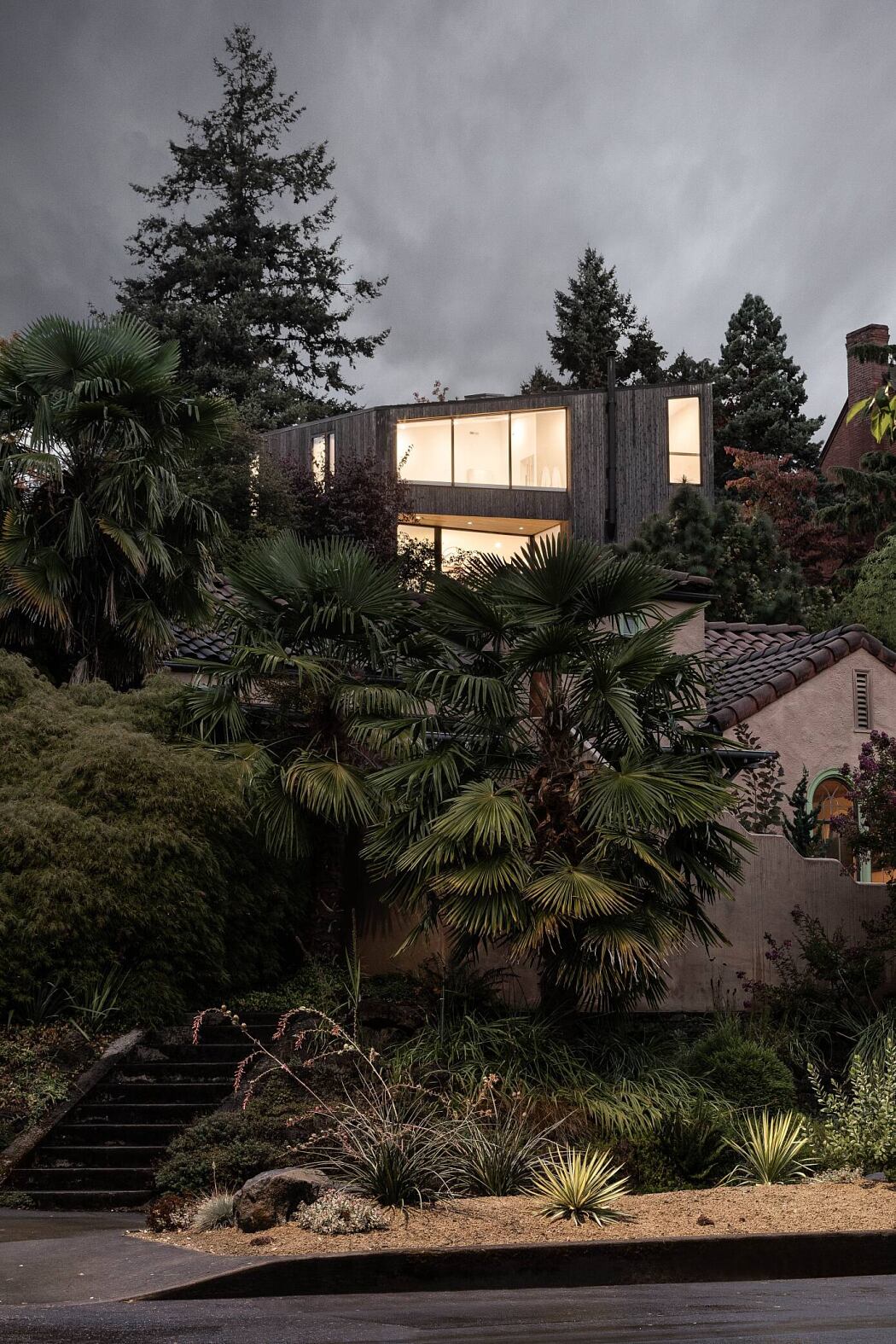 Ridge House is a single-family home situated along the crest of a topographic ridge in Alameda, Portland. With its compact footprint and crystalline form, the architecture is shaped as a response to the dramatic topography of the site, as well as opportunities for views connecting the elements that define the site.

Ridge House is a detached modernist single-family three storey home situated in Portland’s Alameda neighborhood on a site with dramatic views of the city’s southwest hills and striking city line. The house is perched at the crest of a hill, with the street sloping away laterally to the west; the site also falls away substantially from the street to the rear property line – providing exceptional picturesque vistas.

The clients, Cara and Jen are a female couple with two kids – a 6-yearold son and 12-year-old daughter. When they originally purchased the property, they had intended to build a modernist renovation and addition to the existing house. The design team worked for over a year to explore ways to adapt the existing structure, which was originally built in 1918 and was suffering from a failing foundation. Upon determination that entirely new foundation work was the only viable way forward, the design team worked creatively to design a smaller modernist house that worked within the constraints of the budget.

In downsizing from their previous house, the clients were very concerned about decreasing their living space. The previous house was considerably larger overall, yet the basement was rarely used since it was situated below grade. Maximizing the quality of the living space across all three levels of the house provided spatial separation between the different aspects of the functional program while also affording a wider range of experiences in relation to the site.

The architectural approach was to create a concrete plinth upon which a crystalline wood-clad box is perched. The concrete plinth acts to retain the site and organize the landscape, while also striking a horizontal datum that marks the sloping topography of the site. The floor plan is a skewed rectangle – responding to the primary vista to the southwest, while also creating a setback for the entry from the street. The main floor of the house is a ’great room’ concept (kitchen, dining, and living rooms together in a single space) with a double-height sky-lit living room that features a delicate folded plate steel stair. The sloping site affords a lower level that aligns with the natural grade at the rear of the house, creating a bright and spacious family room, yoga/meditation space, and temporary guest room.

The skewed floor plan and diagonal ridge beam create a dynamic form which cantilevers at the acute corners of the site, creating the experience of a commanding and dramatic prow from the street. The angled roof form also creates dynamic roof angles for the interior spaces and tapered window openings.

The Alameda neighbourhood is characterized by distinctive large trees and vistas (on this lot and neighbouring lots) that are intentionally framed by the various window openings in the project. Conversely, the placement and orientation of the house specifically screens out views of neighbouring homes to create a sense of privacy in the urban realm. The strategic creation of apertures to frame expansive views to the south creates a feeling of refuge and connection to nature reminiscent of a cabin-like experience in the Pacific Northwest.

Ridge House is an example of an essentialist approach to residential architecture – employing the ‘Less But Better’ ethos of legendary German industrial designer Dieter Rams. Underdeveloped for the site, the project intentionally focuses on the essential mechanisms for living that were important to the clients due to budget constraints. By celebrating the necessary aspects of living through the design, the project not only makes efficient use of the floor area, but also limits its environmental impact through the compact footprint and energy efficiency.

The design employs a restrained material palette – the interior materials are concrete, drywall, and bleached white oak, accented with blackened steel detail elements. The exterior is clad in dark-stained vertical cedar board with black metal accents. An integrated woodburning stove was installed to afford energy efficient warmth for rainy days in the Pacific Northwest. While the modernist form of the house is a contrast to the neighbouring character homes, the minimalist vernacular material palette allows the house to blend seamlessly into the treed landscape along the top of the ridge.