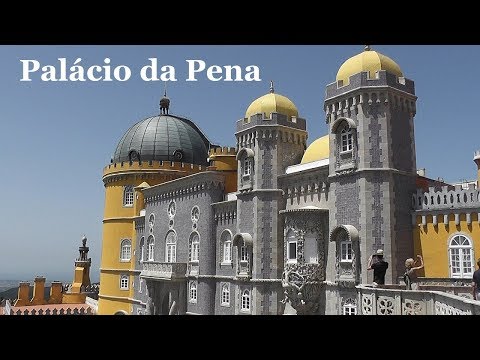 Palácio da Pena is a Romanticist castle in São Pedro de Penaferrim, in the municipality of Sintra, Portugal.

The palace stands on the top of a hill in the Sintra Mountains above the town of Sintra, and on a clear day it can be easily seen from Lisbon and much of its metropolitan area.

It is a national monument and constitutes one of the major expressions of 19th-century Romanticism in the world. The palace is a UNESCO World Heritage Site and one of the Seven Wonders of Portugal. It is also used for state occasions by the President of the Portuguese Republic and other government officials.

The castle’s history started in the Middle Ages when a chapel dedicated to Our Lady of Pena was built on the top of the hill above Sintra. According to tradition, construction occurred after an apparition of the Virgin Mary.

The Pena Palace has a profusion of styles much in accordance with the exotic taste of the Romanticism. The intentional mixture of eclectic styles includes the Neo-Gothic, Neo-Manueline, Neo-Islamic and Neo-Renaissance. References to other prominent Portuguese buildings such as the Belém Tower are also present.

SINTRA is a municipality and town in the Grande Lisboa subregion of Portugal, and considered part of the Portuguese Riviera. Sintra is known for its many 19th-century Romantic architectural monuments, which has resulted in its classification as a UNESCO World Heritage Site. It has become a major tourist centre, visited by many day-trippers who travel from the capital Lisbon.

In addition to the Sintra Mountains and Sintra-Cascais Nature Park, the parishes of the town of Sintra are dotted with royal retreats, estates, castles and other buildings, including the medieval Castelo dos Mouros, the Pena National Palace and the Sintra National Palace.