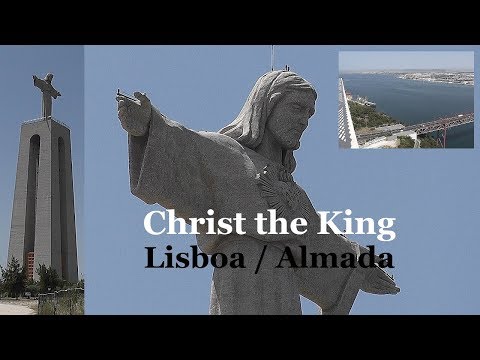 The Sanctuary of Christ the King (Portuguese: Santuário de Cristo Rei) is a Catholic monument and shrine dedicated to the Sacred Heart of Jesus Christ overlooking the city of Lisbon situated in the city of Almada, Portugal.

It was inspired by the Christ the Redeemer statue of Rio de Janeiro, in Brazil, after the Cardinal Patriarch of Lisbon visited that monument.

The project was inaugurated on 17 May 1959, while Portugal was ruled by António de Oliveira Salazar who gave his final permission for the project. The giant statue in cement was erected to express gratitude that the Portuguese were spared the horrors and destruction of World War II.

In 1941 the land which was used to construct the monument was acquired. The construction project began in 1949 and took ten years to complete. But it was only in 1952 that the first construction started.

The first inauguration of the complex officially was on 17 May 1959. On the 25th anniversary of the Shrine in 1984, the Chapel of Our Lady of Peace was inaugurated. A new plan was approved to recondition the grounds of the Shrine and also to build a Sanctuary, which included a rectory, a chapel, administration and meeting halls and exhibition galleries.

The monument was erected on an isolated clifftop 133 m above the sea, overlooking the Tagus River left bank.

It is the highest point in Almada, on a plateau dominated by the 25 de Abril Bridge, and close to the Estação Elevatória e Reservatório do Pragal.

It is accessible from Lisbon by car (over the 25 de Abril Bridge east of the crossing), by train through station in Pragal and by ferry over the Tagus, through the port of Cacilhas in Almada.

The monument consists of a trapezoidal pedestal of 82 metres (269 ft) height, formed by four arches and a flat platform, supporting the 28 metres (92 ft) image of Christ.

The four arches of the pedestal are oriented in the directions of the compass rose. The figure of Christ, comparable to the Christ the Redeemer statue in Rio de Janeiro, forms a cross, with its arms extended out facing the city of Lisbon, as if to embrace the city. Due to issues of security and safety, the monument was sufficiently distanced from the cliffs on which it predominates.

At the base of the statue is the observation deck, at 82 metres (269 ft), which enables panoramic views of the city of Lisbon, the Tagus River and the 25 de Abril Bridge.

Under the statue, occupying a fifth of the pedestal’s height, is the Chapel of Our Lady of Peace (Nossa Senhora da Paz) with an entrance from the northern facade. This space is distinctly different with its masonry stone, the northern facade surmounted by cross and the other facades containing narrow doors.

Inside two of the pillars is an elevator system with access to the terrace; the statue is 79.30 metres high, and overlooks the Tagus (192 metres above the river).

To the south of the monument is the Sanctuary building, comprising a rectangular body of three wings, with facades covered with masonry brick.