Plutarco’s Own Office and HECHO Store in Madrid. 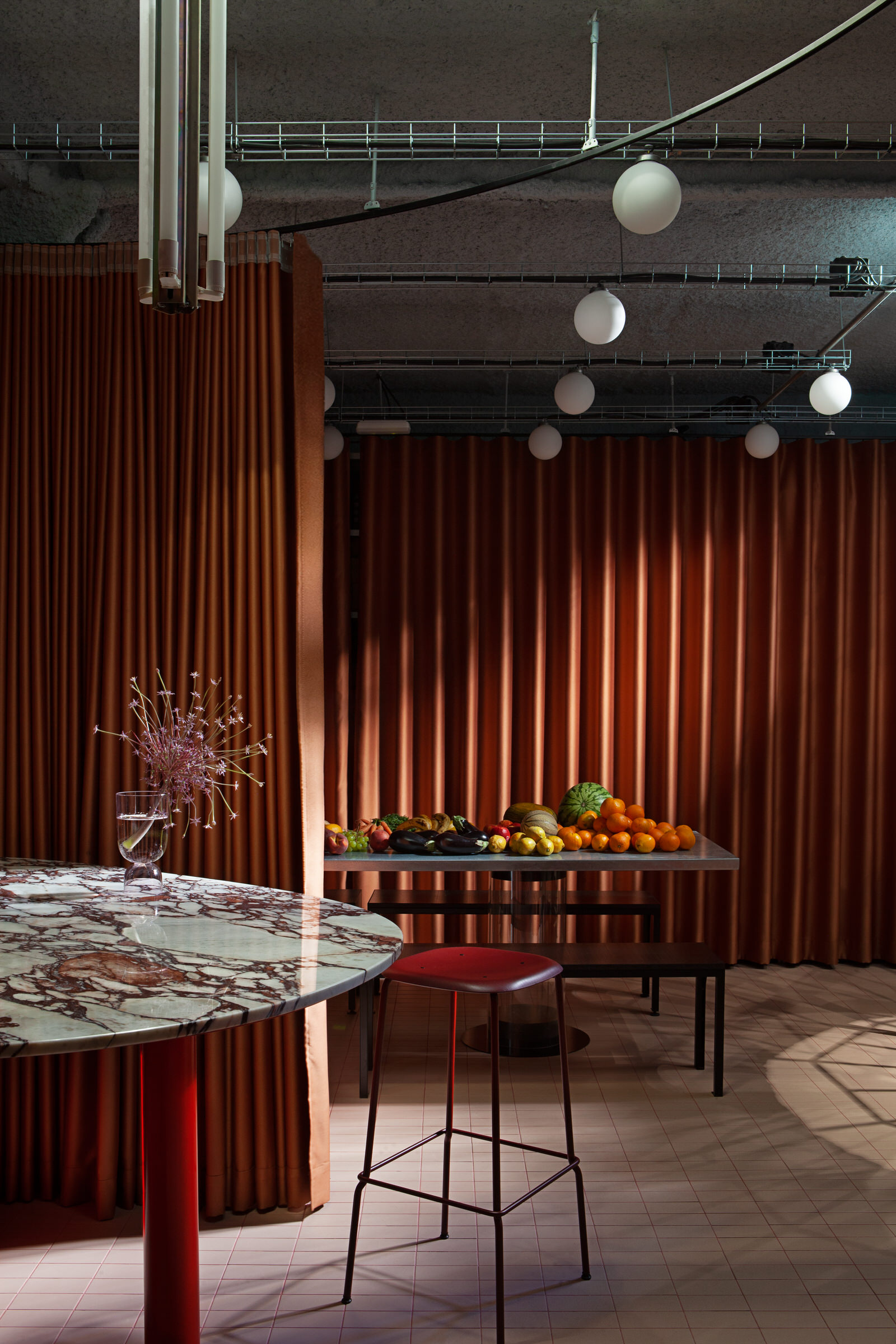 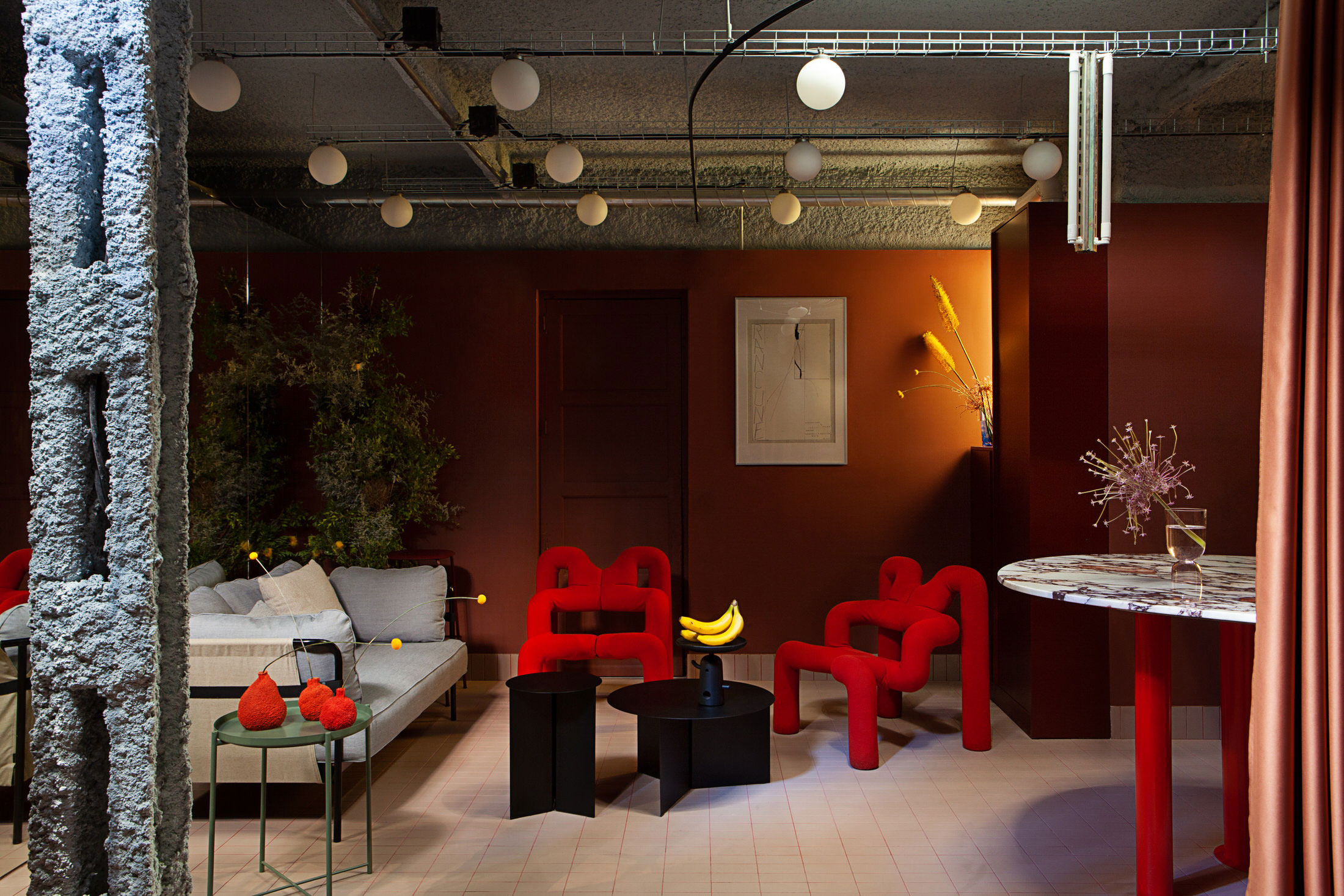 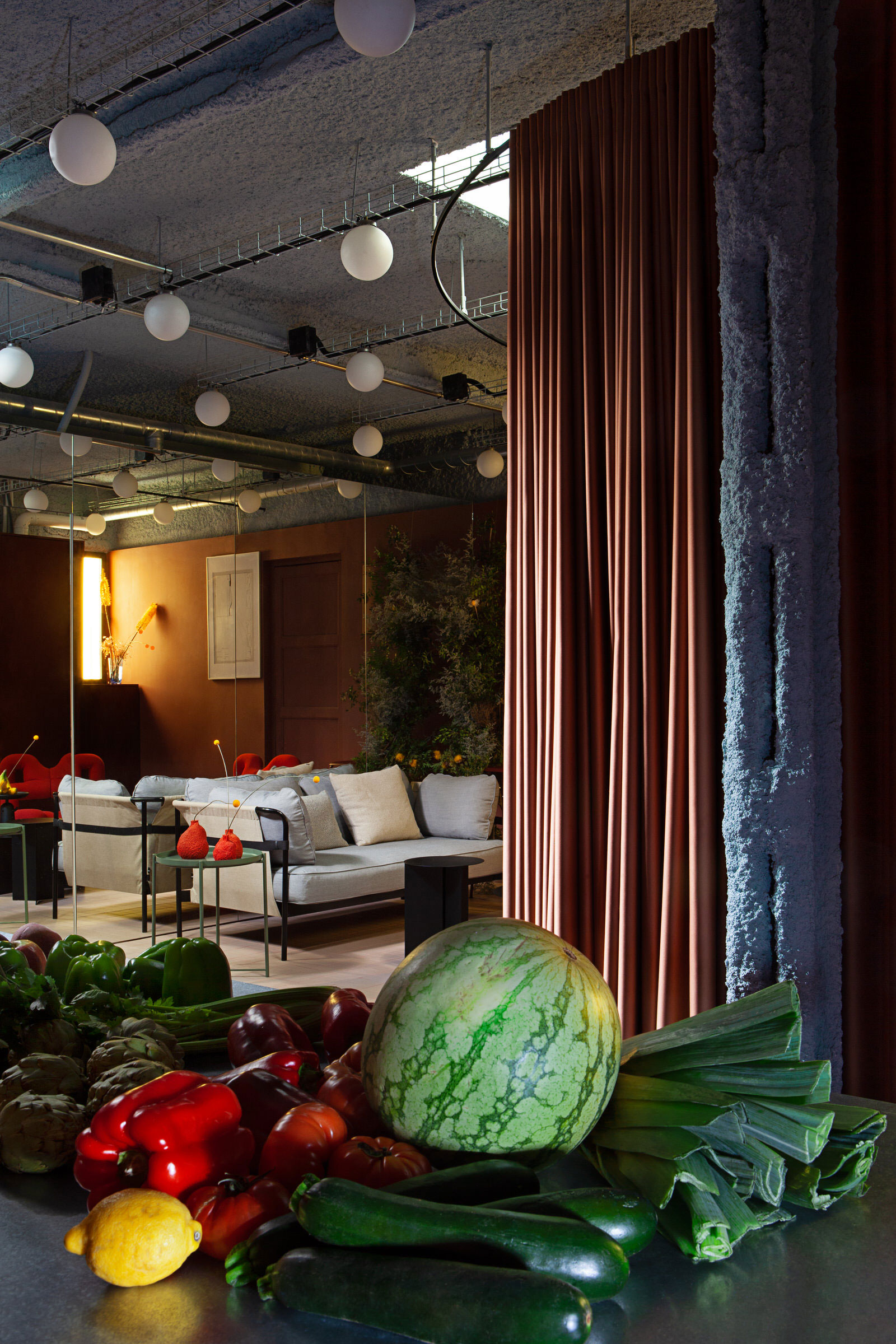 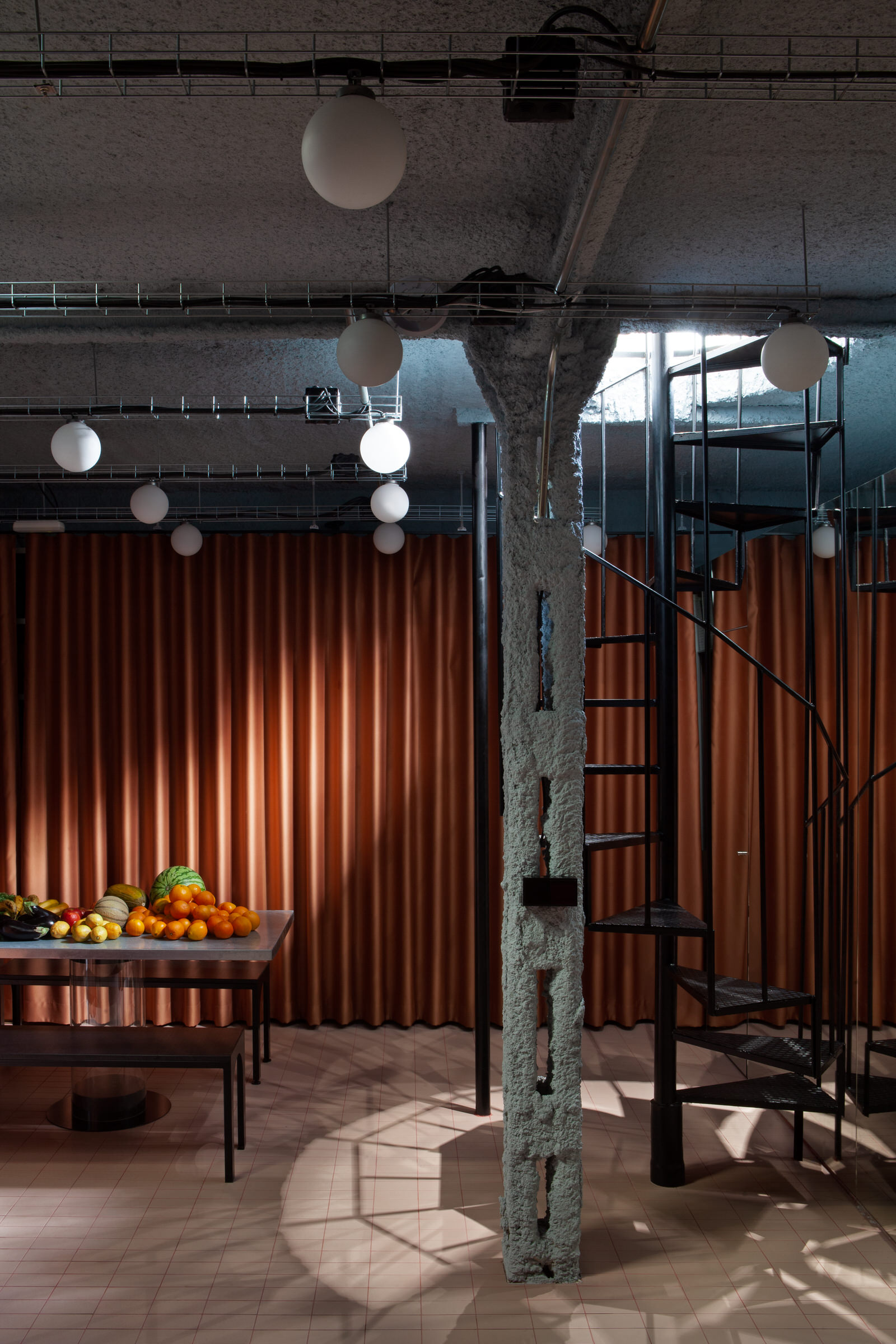 have taken on one of their biggest projects to date, for maybe their toughest clients —themselves, designing their own in the centre of . Sharing with architecture studio Estudio Reciente and a new conscious homeware shop HECHO, the design revolved around the idea of cohabitation.

The working studio is placed in the lower level of a rationalist building in the local district of Chamberí. With six large floor-to-ceiling windows, the interior is doused in natural light with direct views to the public square. The ground floor is a single open space shared between the office and the shop, leaving the underground level — boldly wrapped in — for the bathrooms, storage, kitchen and meeting room.

The office is arranged with working desks organised around the perimeter of the space. In the centre, an irregular table is placed, serving as the informal materials and moodboard-making table, and during the weekend it becomes an extension of the shop. Curtains divide both programs into two possible configurations. 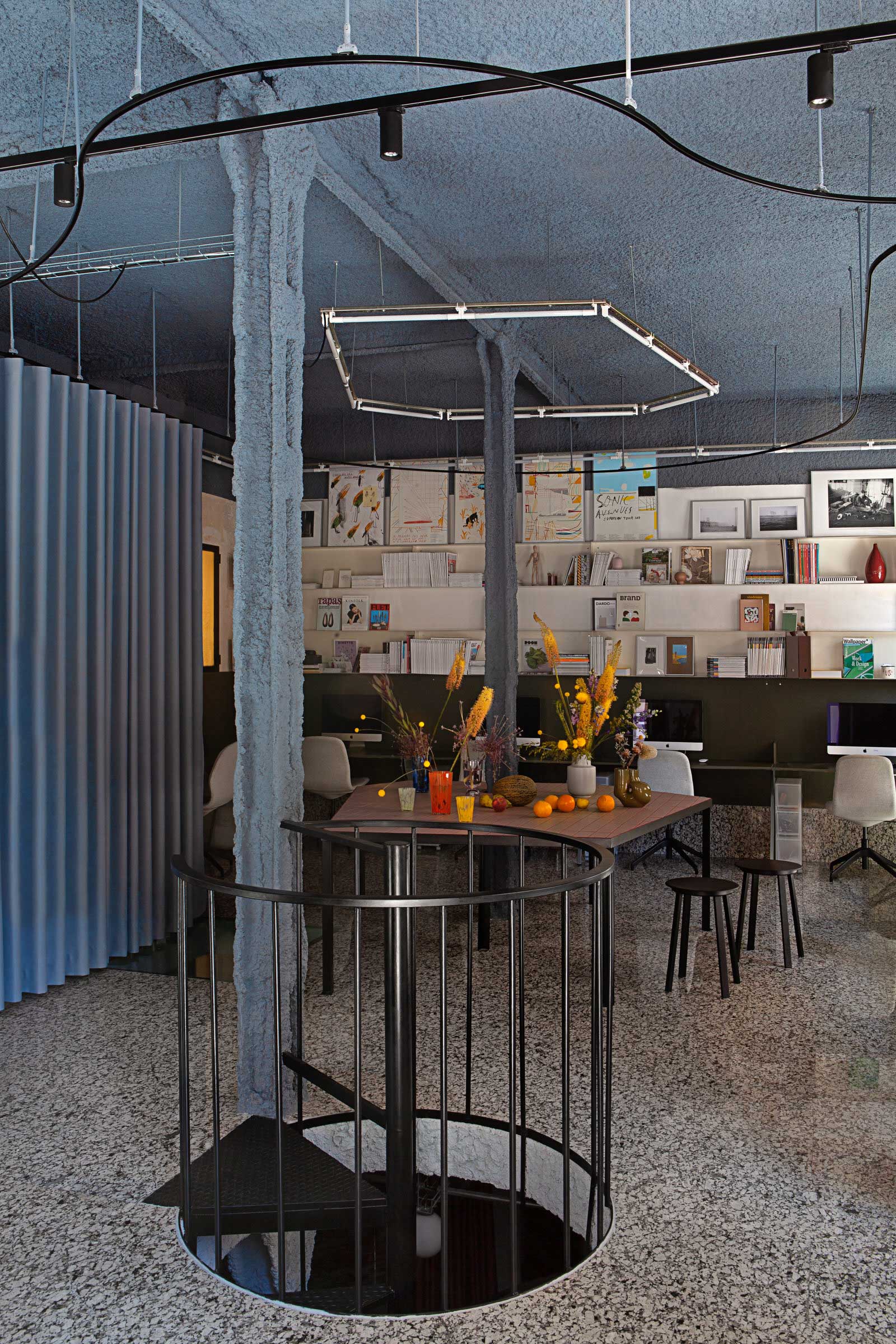 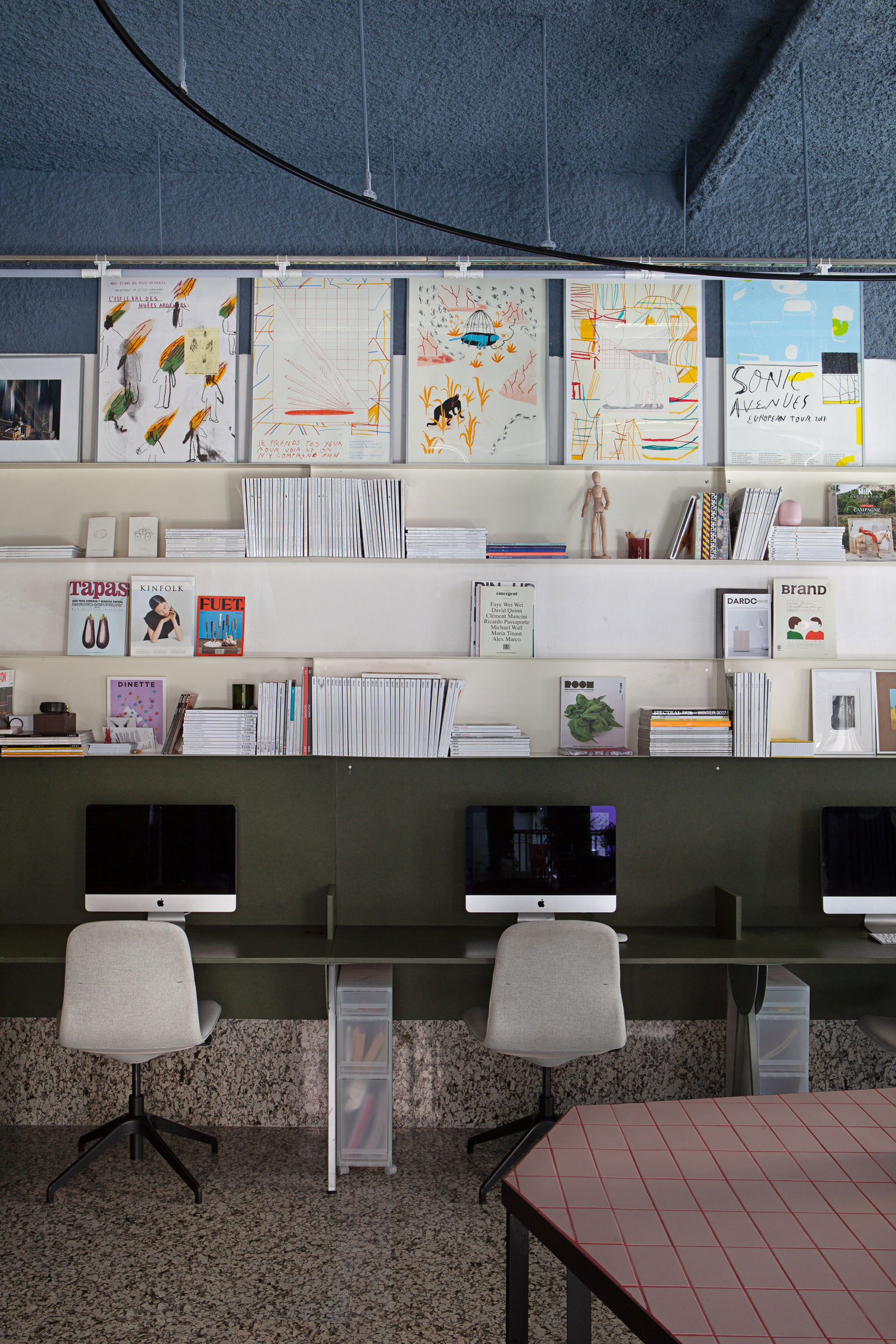 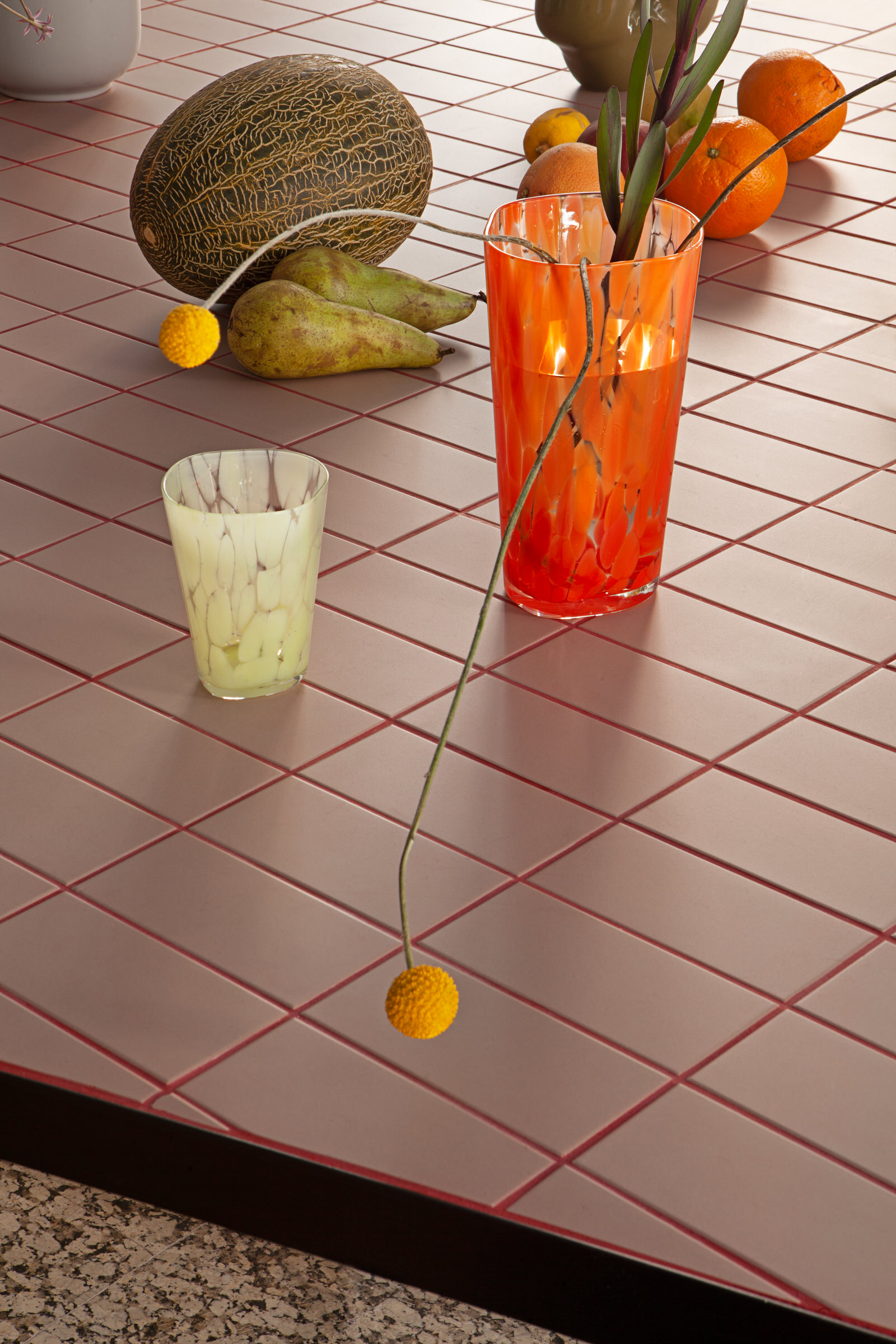 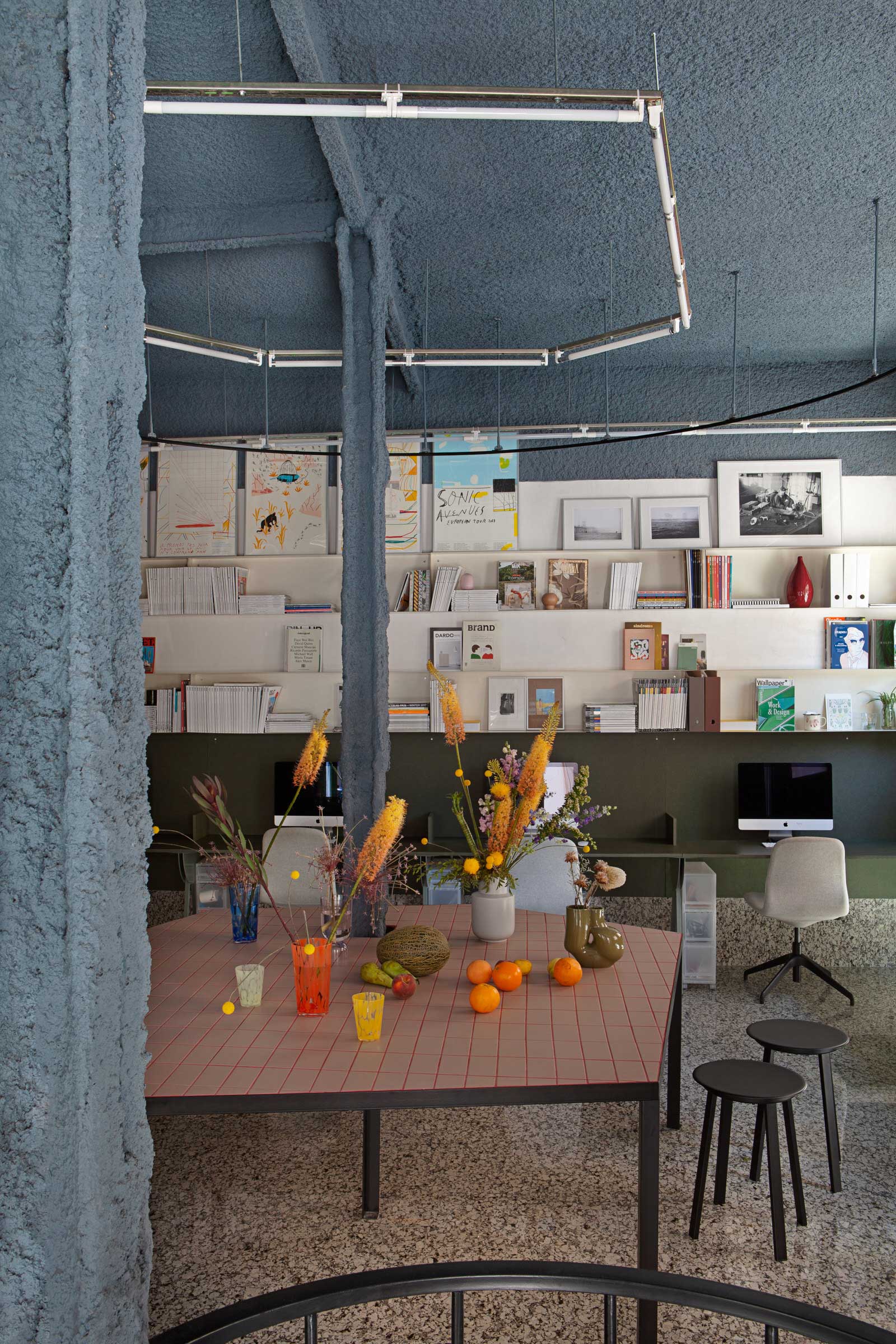 The materials on the upper floor create an industrial atmosphere. Using cold colours — and — tone plays an important role in creating a contemporary and bright interior. The floor is covered in a typical northern Spanish granite, the walls are left as found, and the ceiling and metal structures were sprayed in projected vermiculite in a grey-blue colour.

The underground level is conceived as an explosion of warm colours. The kitchen is the protagonist of the space, projected in wine-colour dyed wooden panels with vertical and horizontals slats and an irregular island. The countertops are all an explosion of different marbles and granites in warm colours. On the opposite wall, a huge mirror box enlarges the space, hiding the bathrooms and storage room. Once again, the curtains are in charge of making the space versatile, hiding the kitchen and creating a meeting room and a small lounge area. The floor has nude-colour tiles with a strong red tile joint — the walls are maroon, and all the different accents are in shiny red, like the furniture, shelves or the tubular legs of the kitchen’s island. 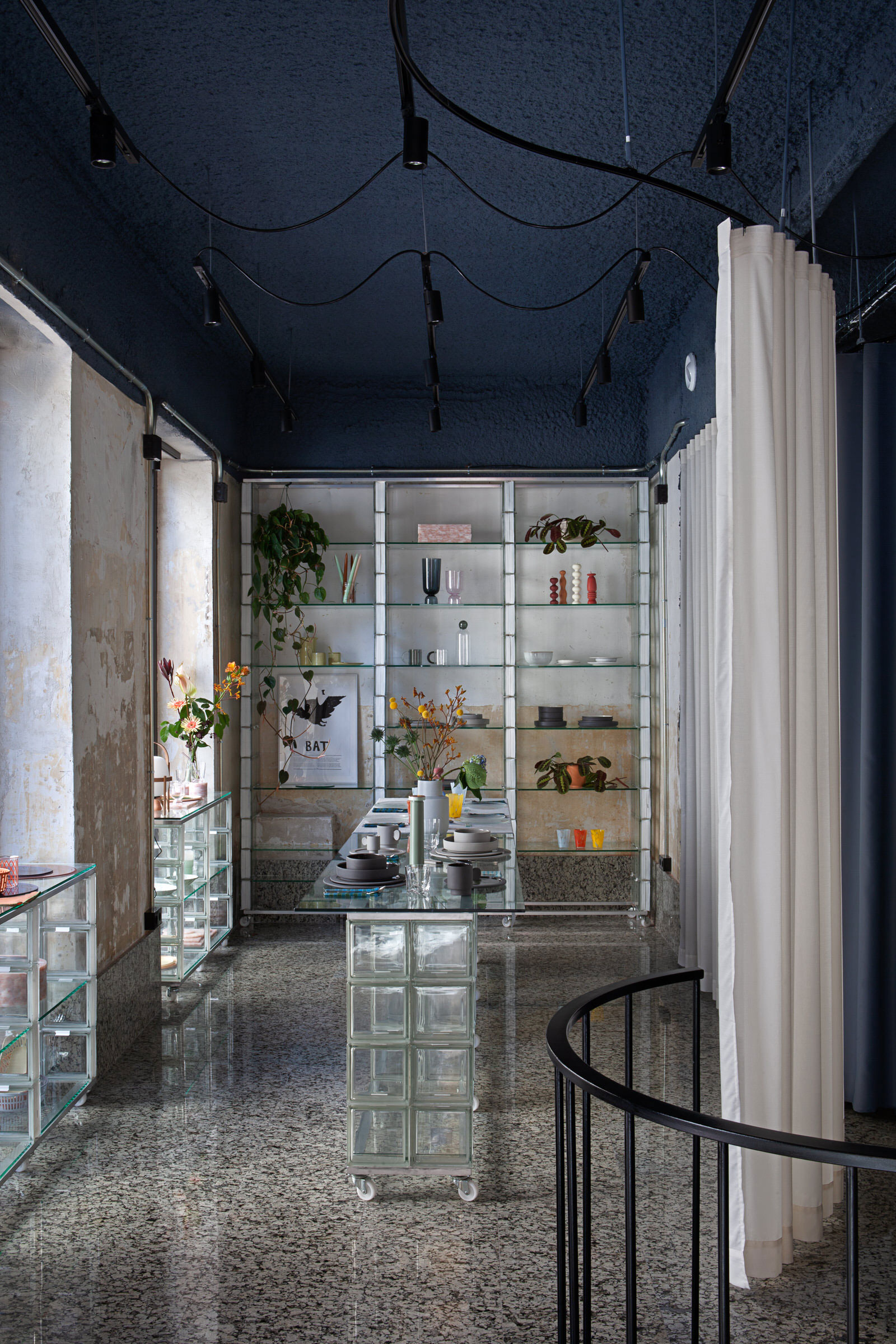 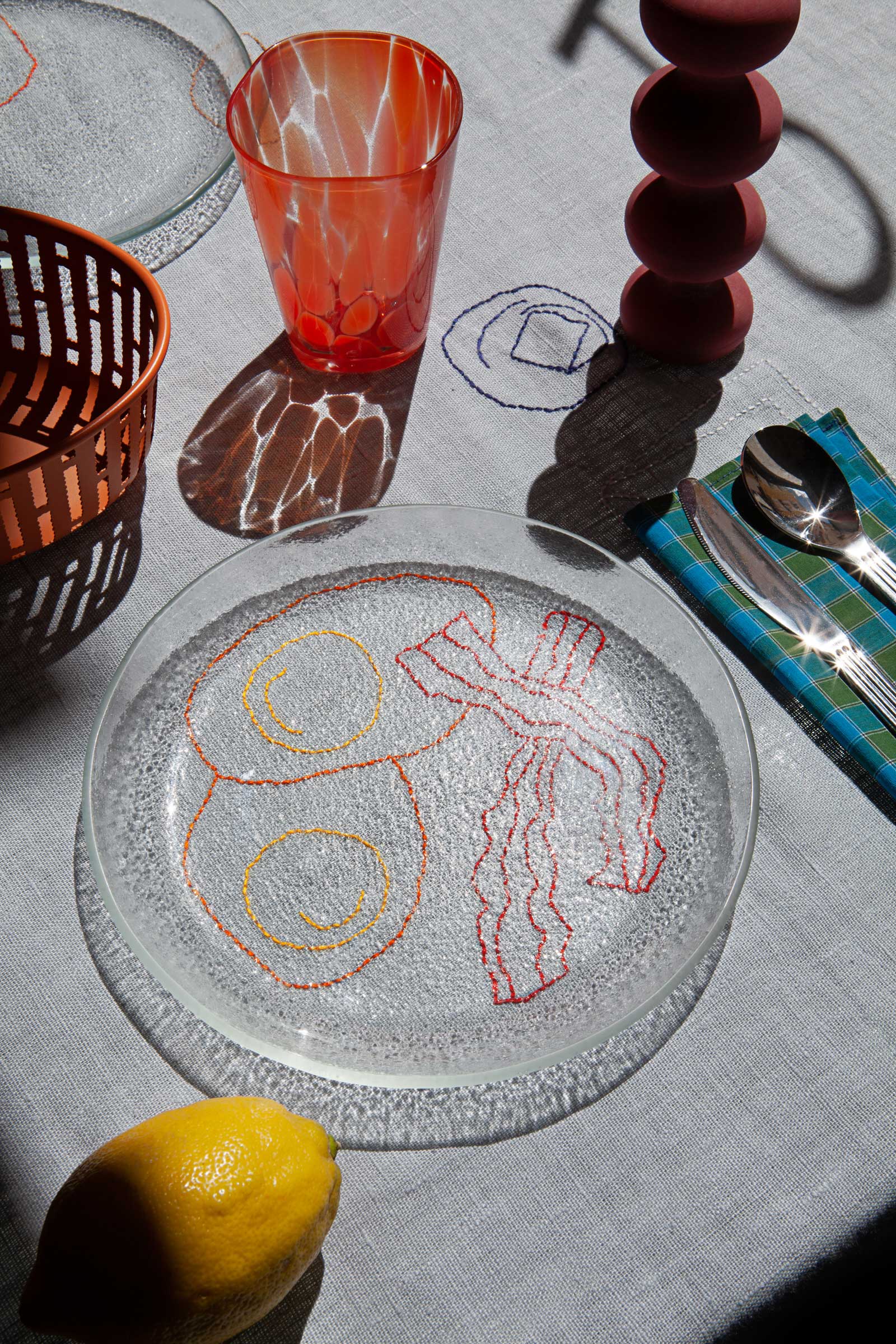 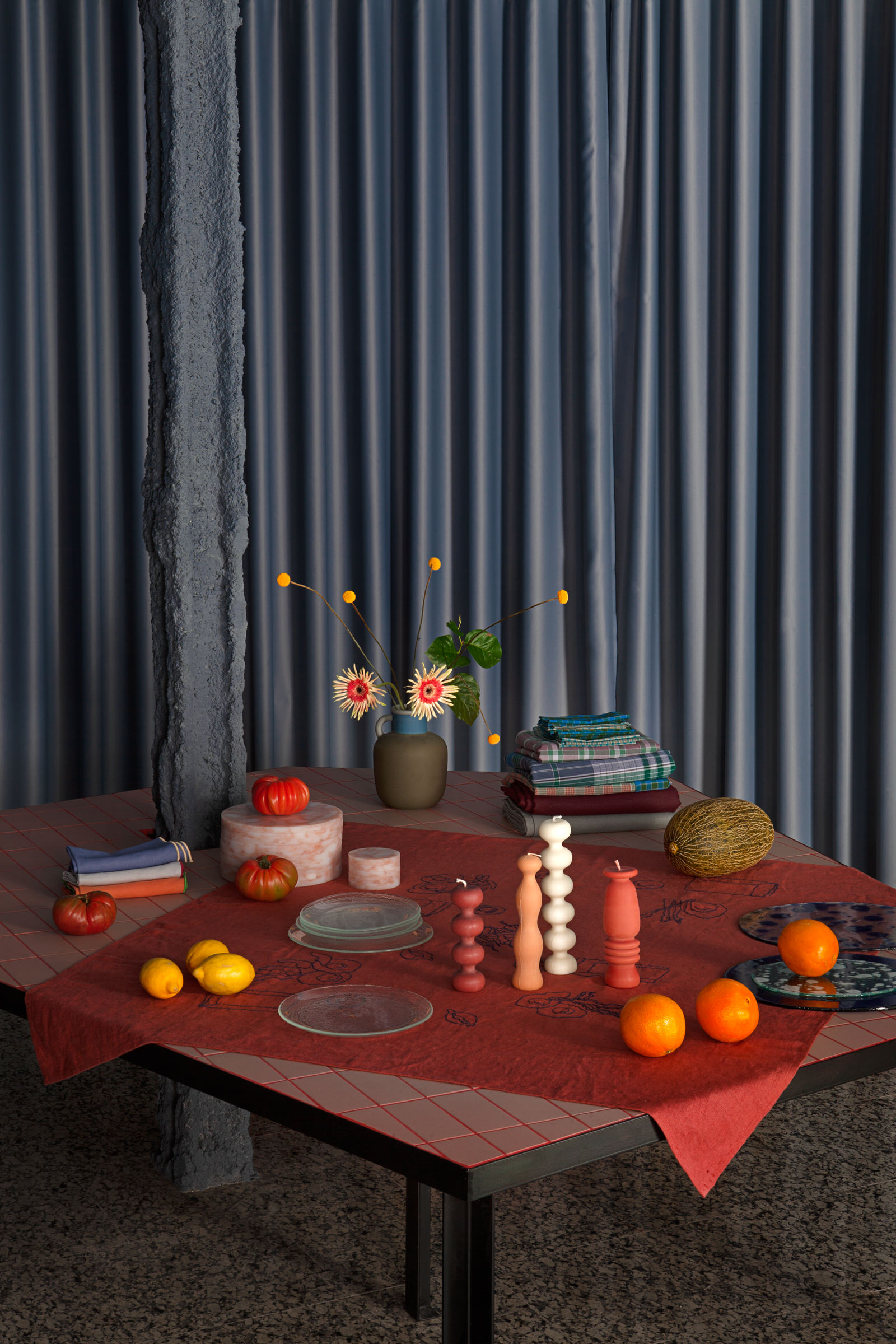 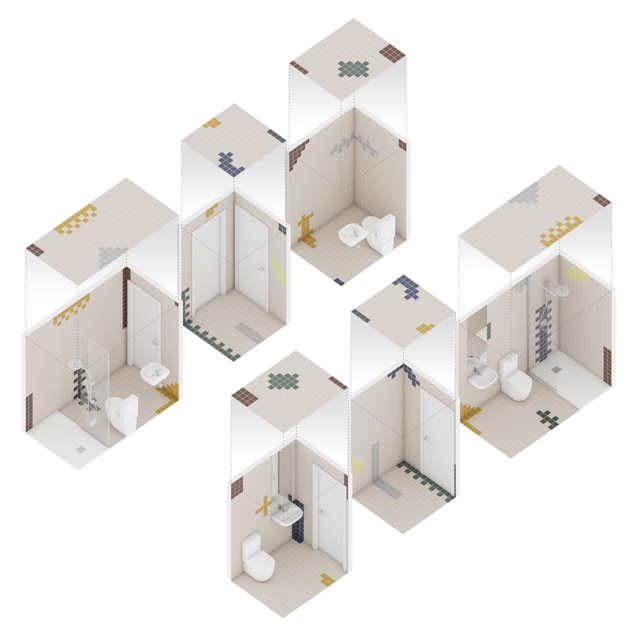 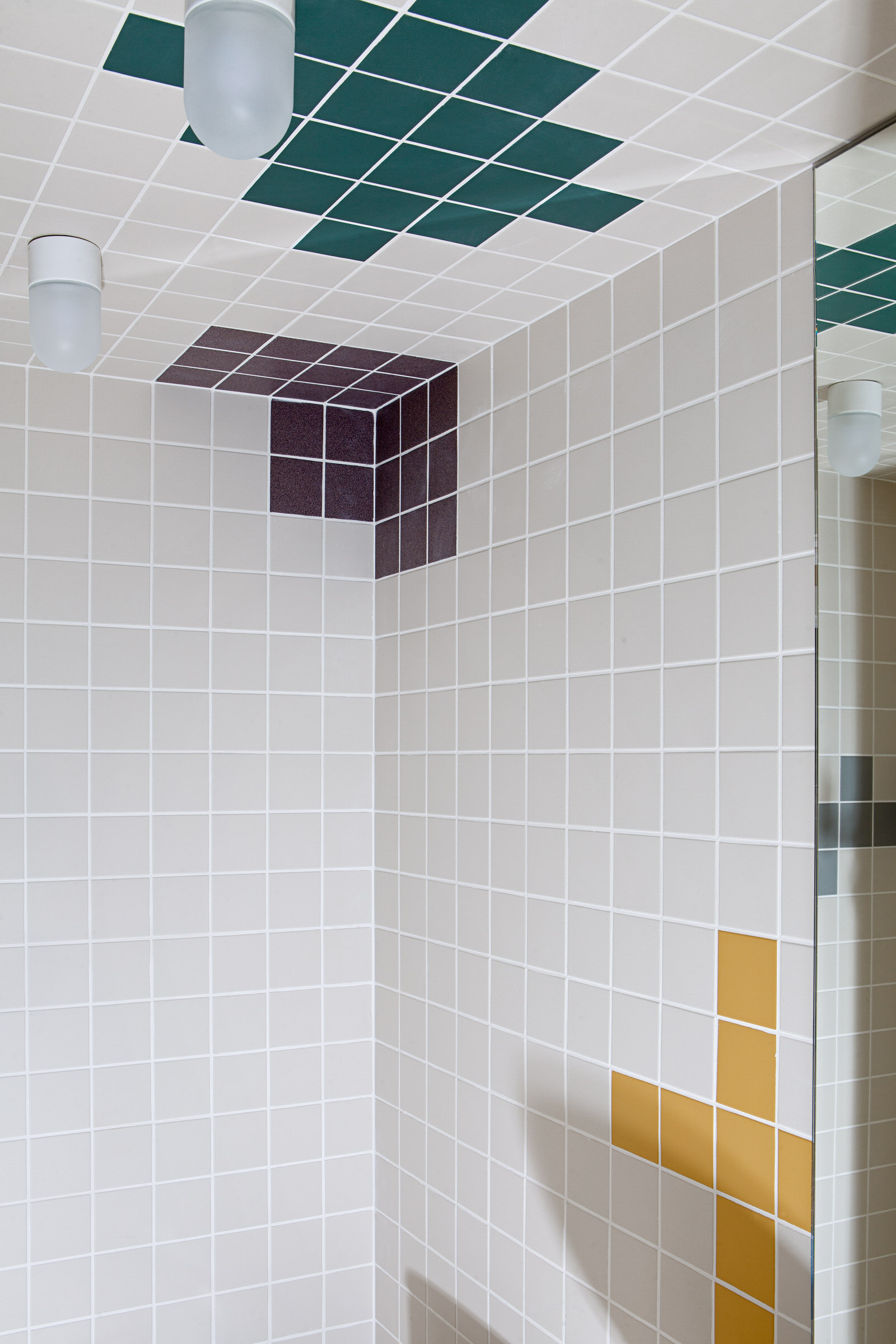 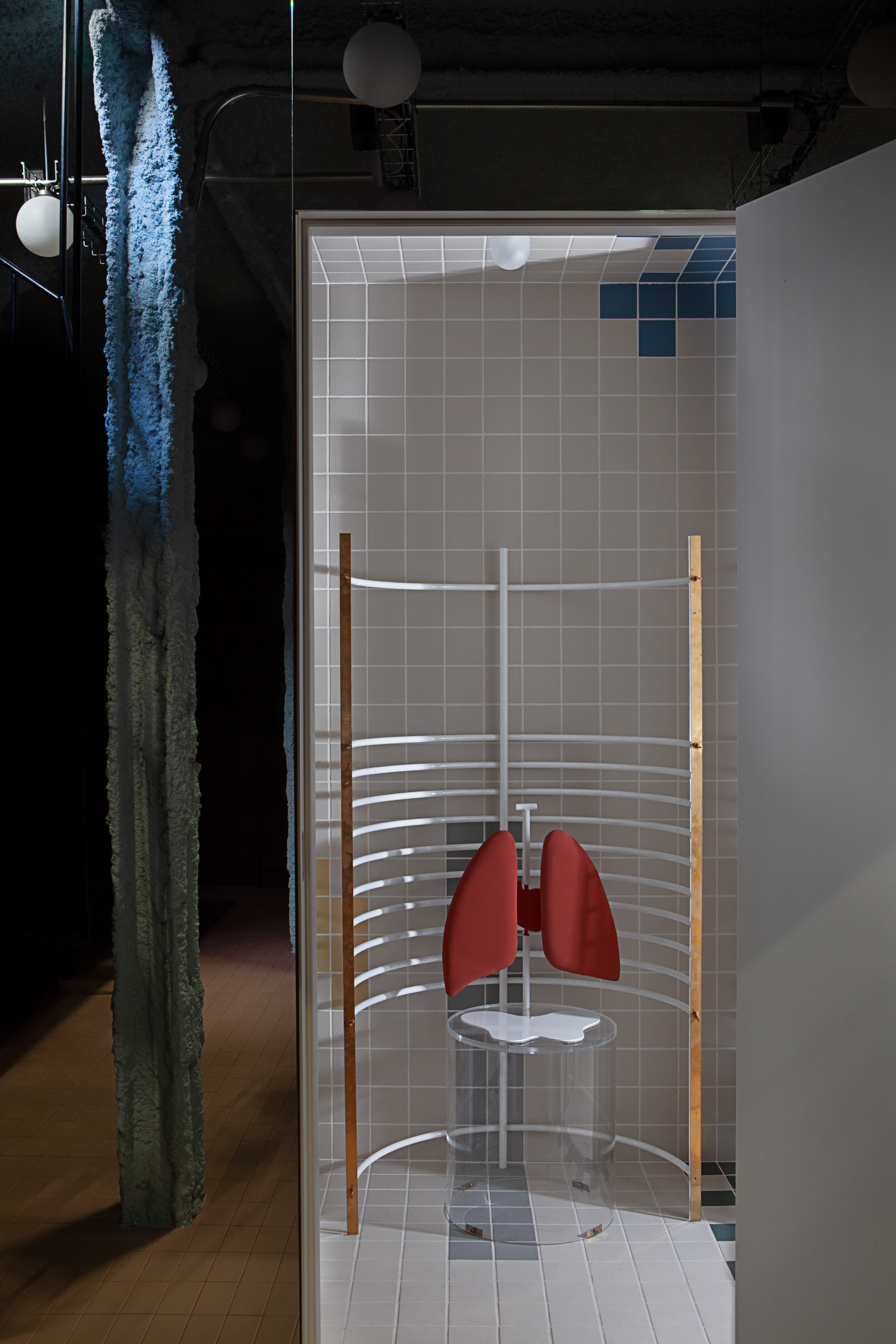 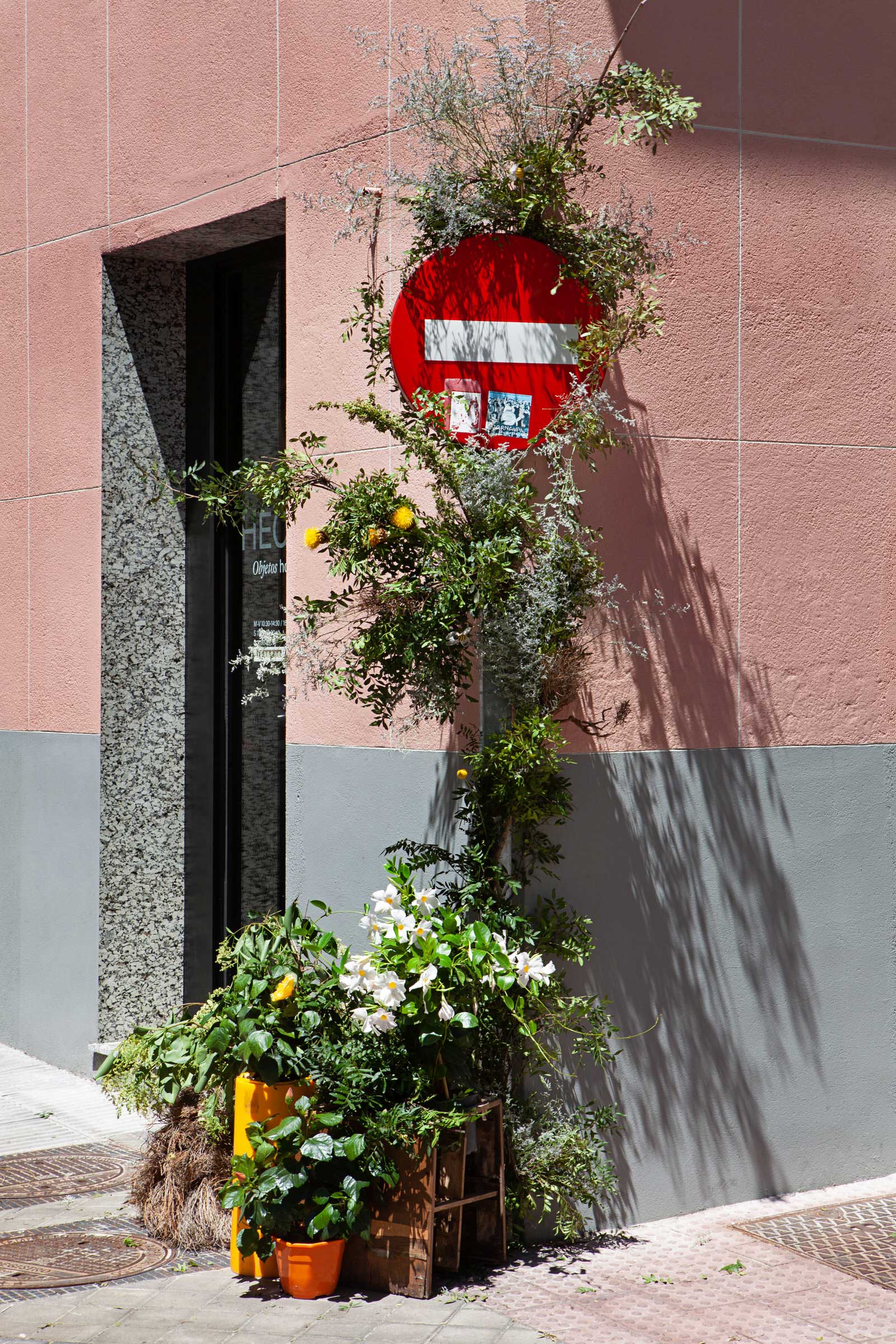 The bathrooms were thought of as an evolving atmosphere. Floors, walls and ceilings are made from a square reticule of beige tiles and abstracts shapes in different colours that colonise the space randomly, creating a playful environment with a surprising effect sitting behind the mirror cube.

A sense of continuity follows through into the homeware shop with the granite floor, raw walls and texturized ceiling, matching the architecture office. The furniture, designed together with , was formed out of transparent , glass shelves and light aluminium structures. Nearly transparent, the furniture echoes the intentions of the new brand while acting as the perfect canvas for the objects to stand out on. The central banquet table offers versatile display in the windows, while the counter desks are all fitted with wheels for moving around the space to create different display scenarios.