Open Shut House is a located in Kooyong, Australia, designed in 2020 by Wala. 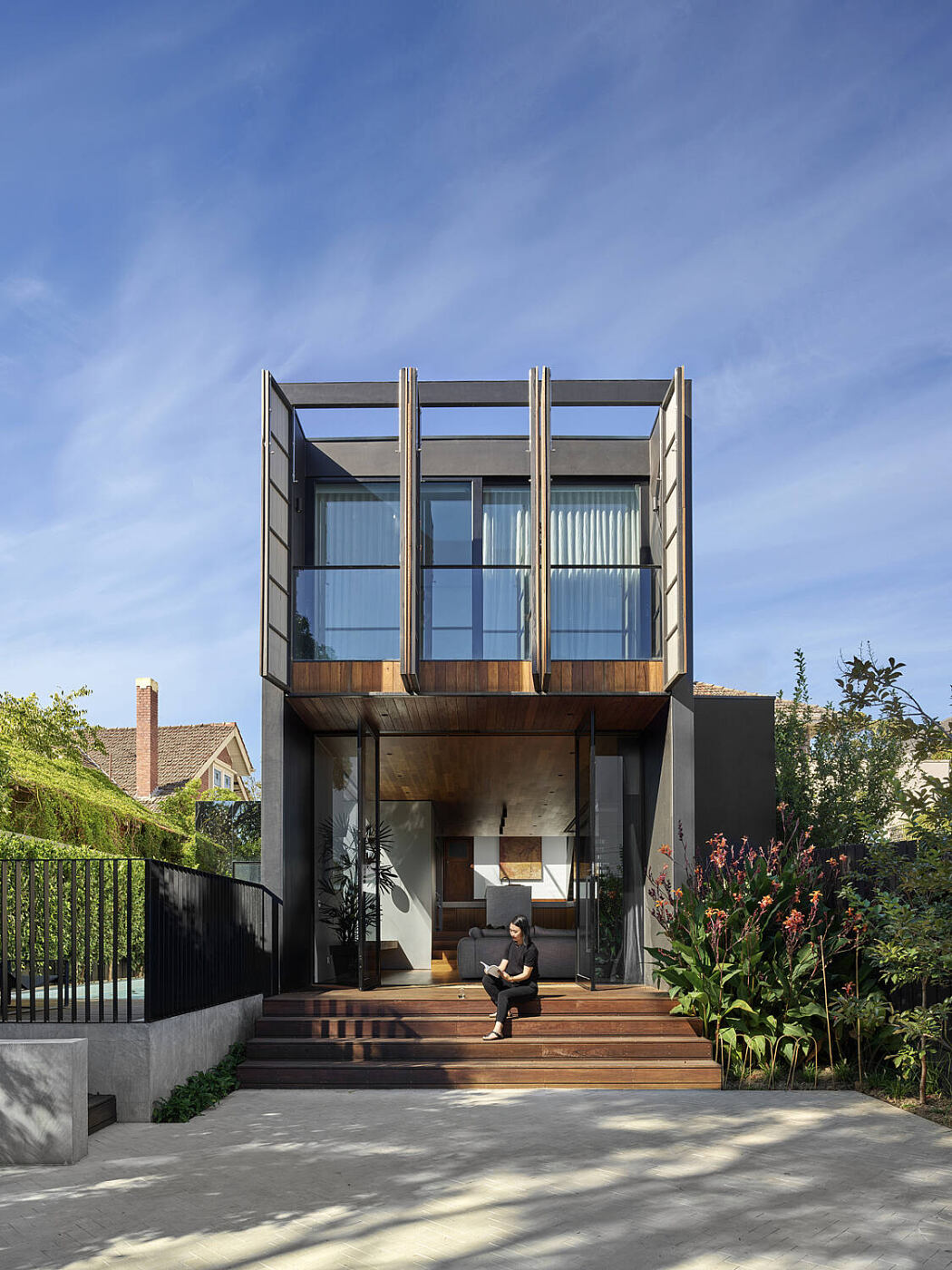 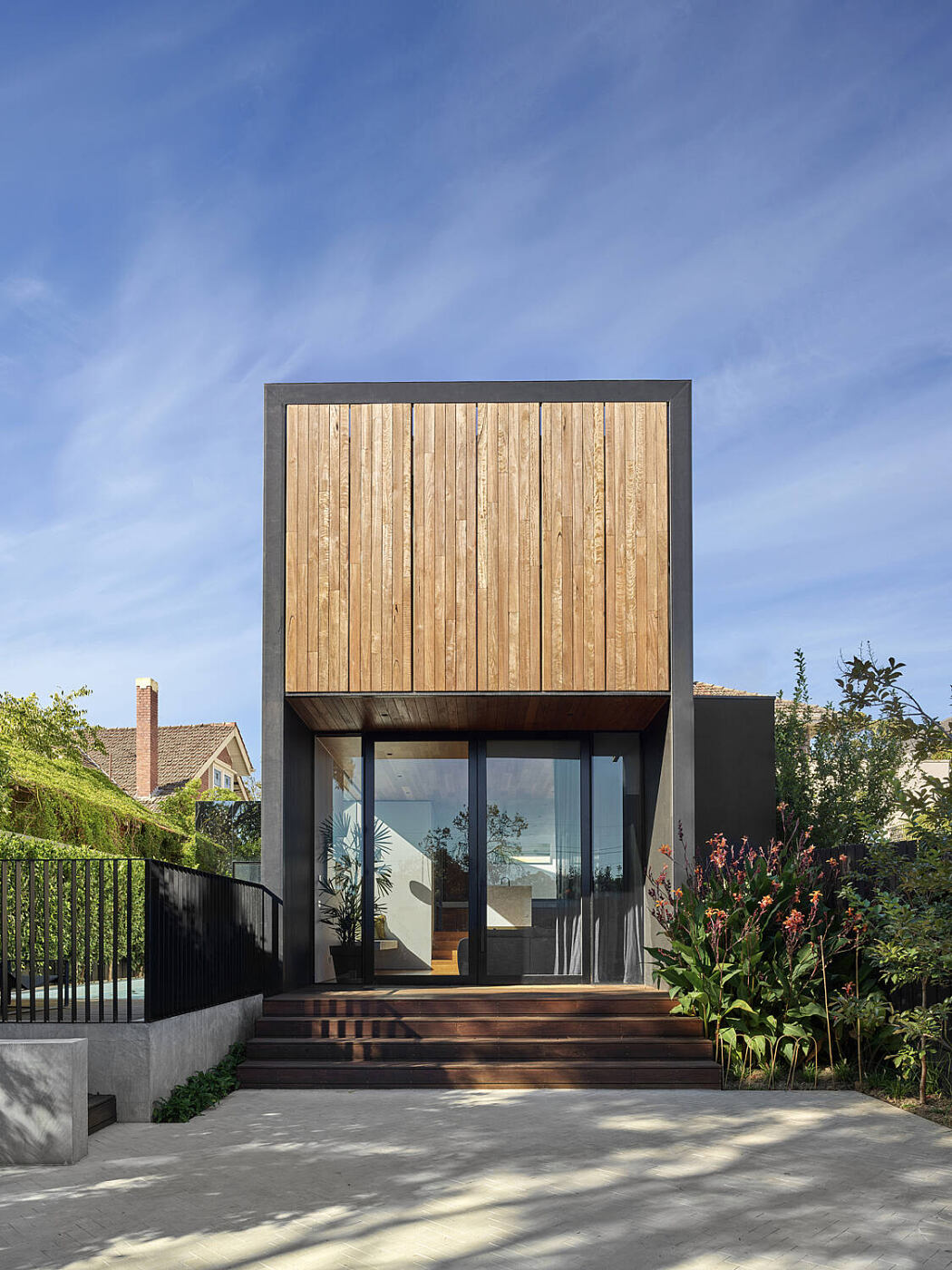 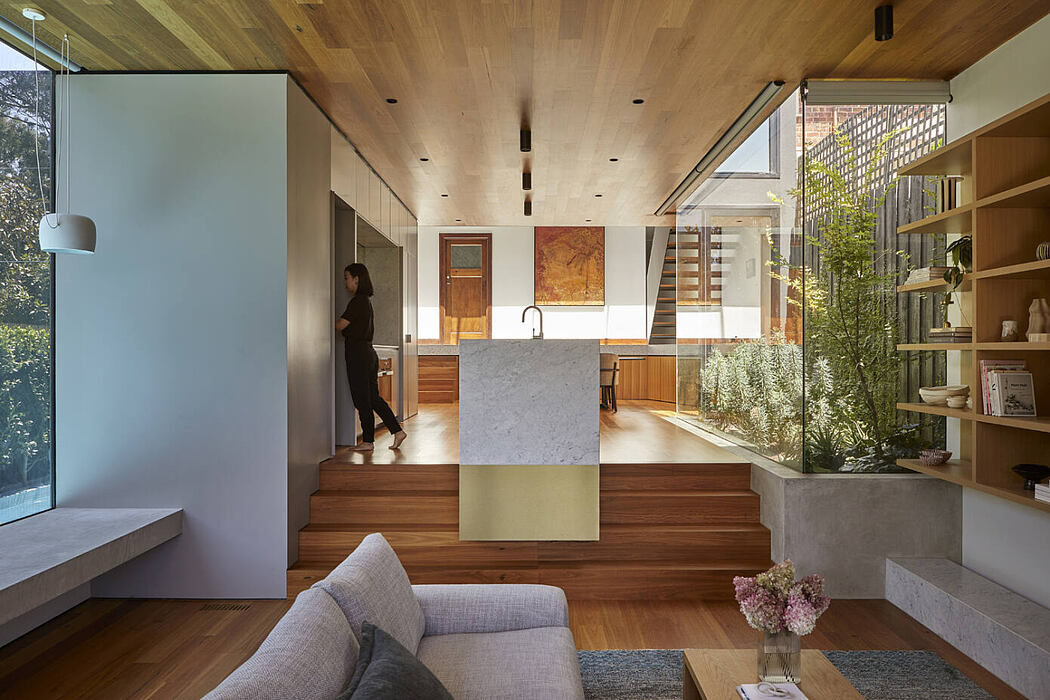 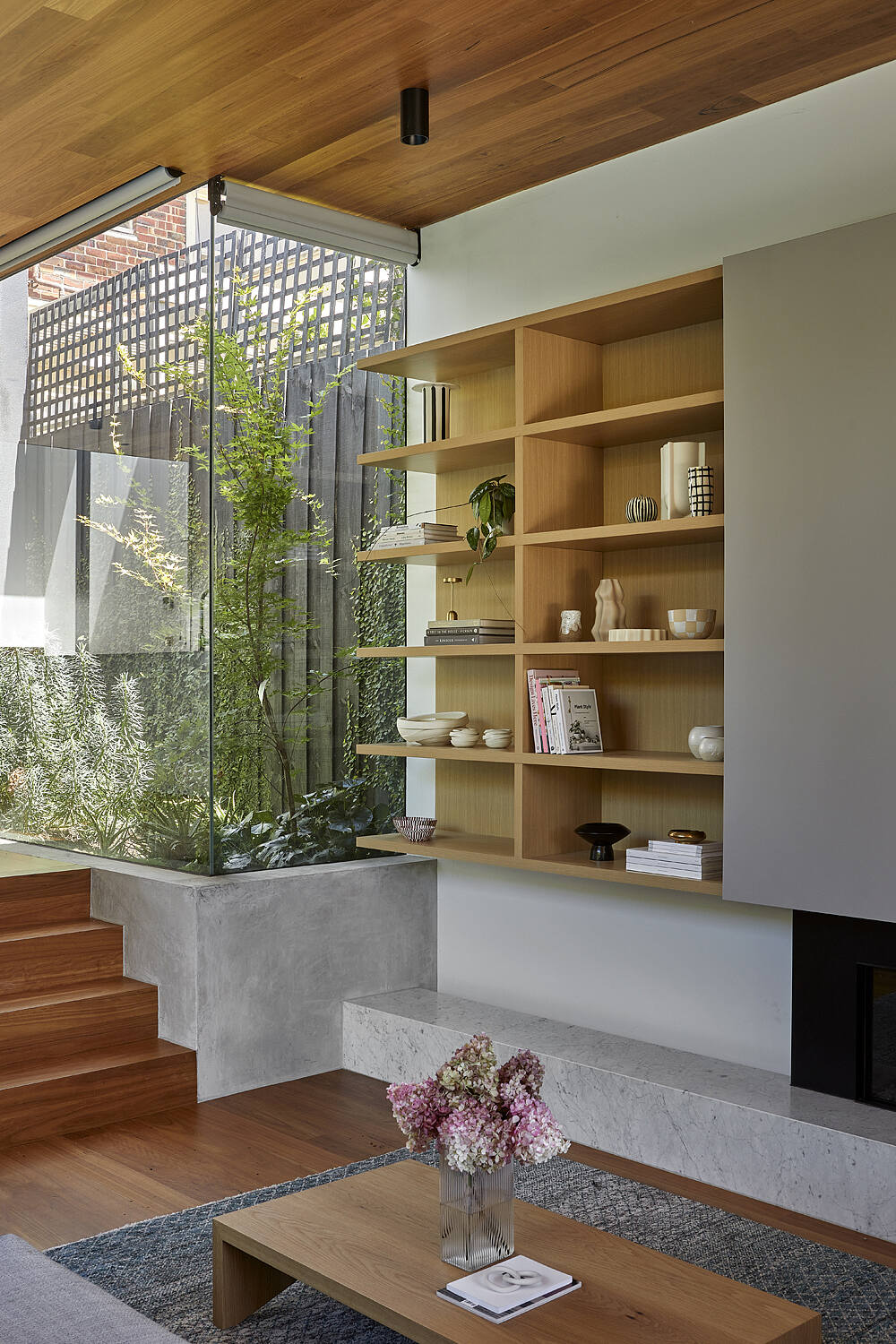 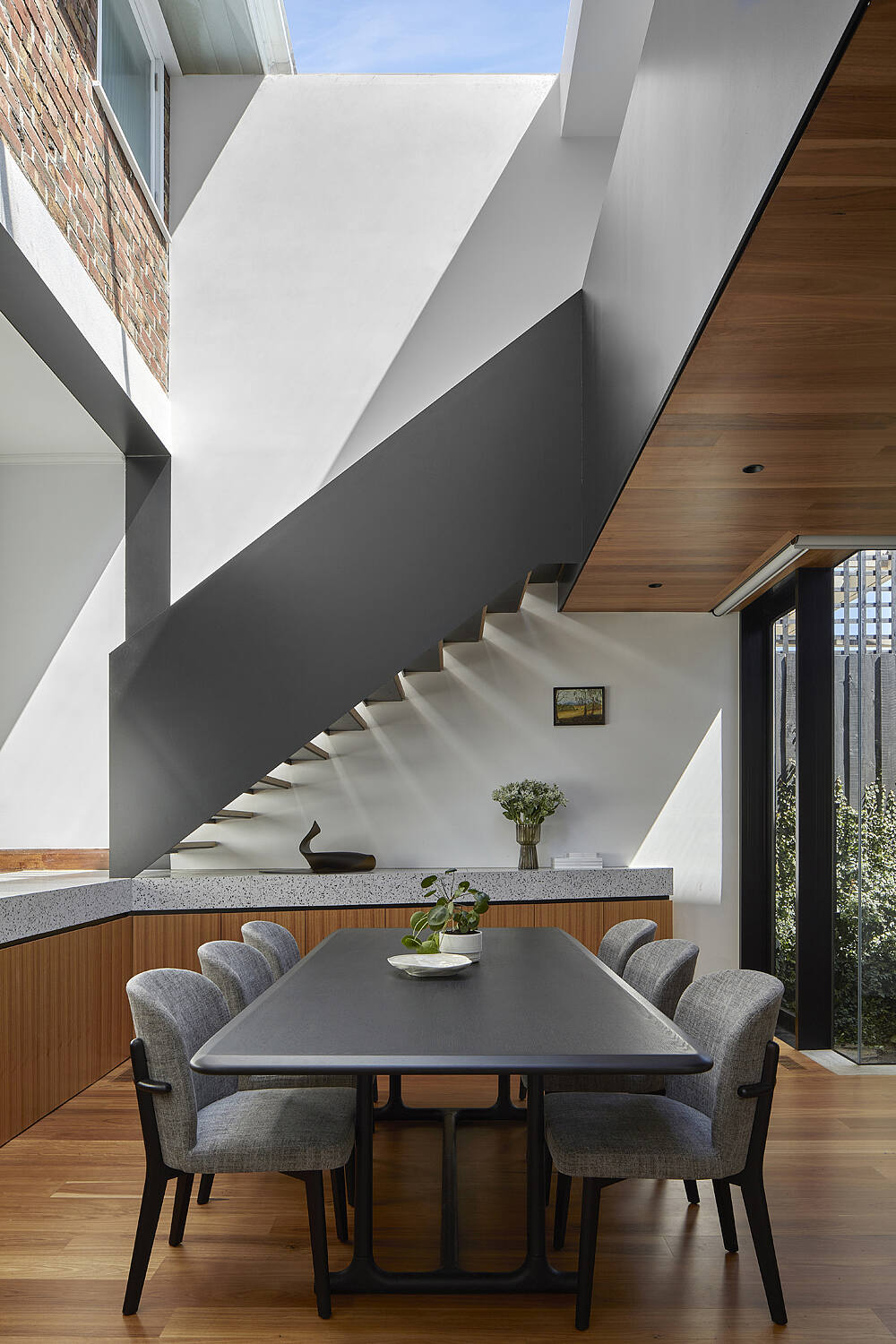 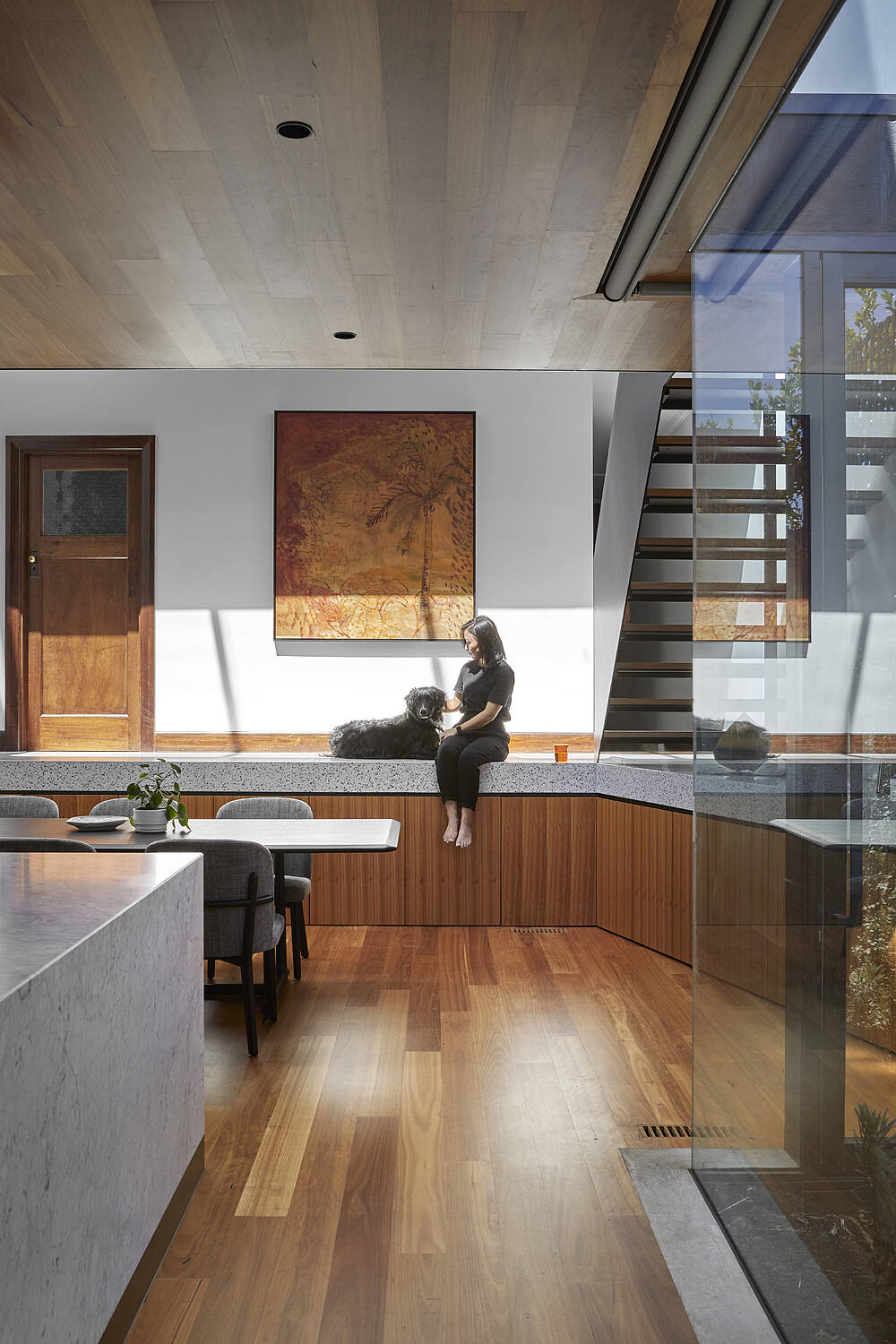 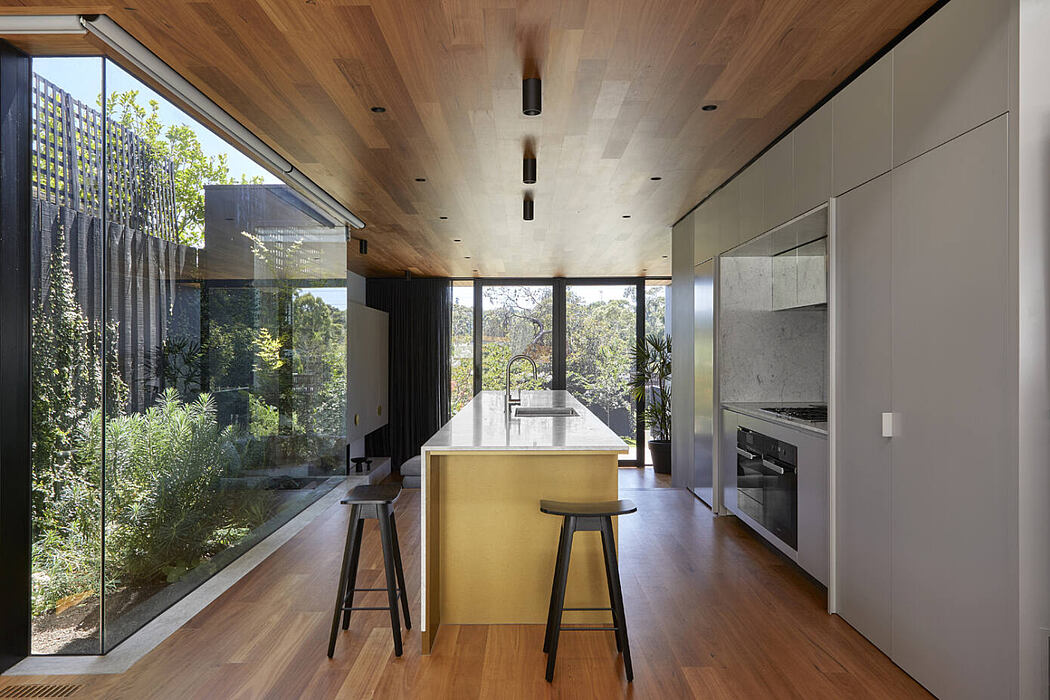 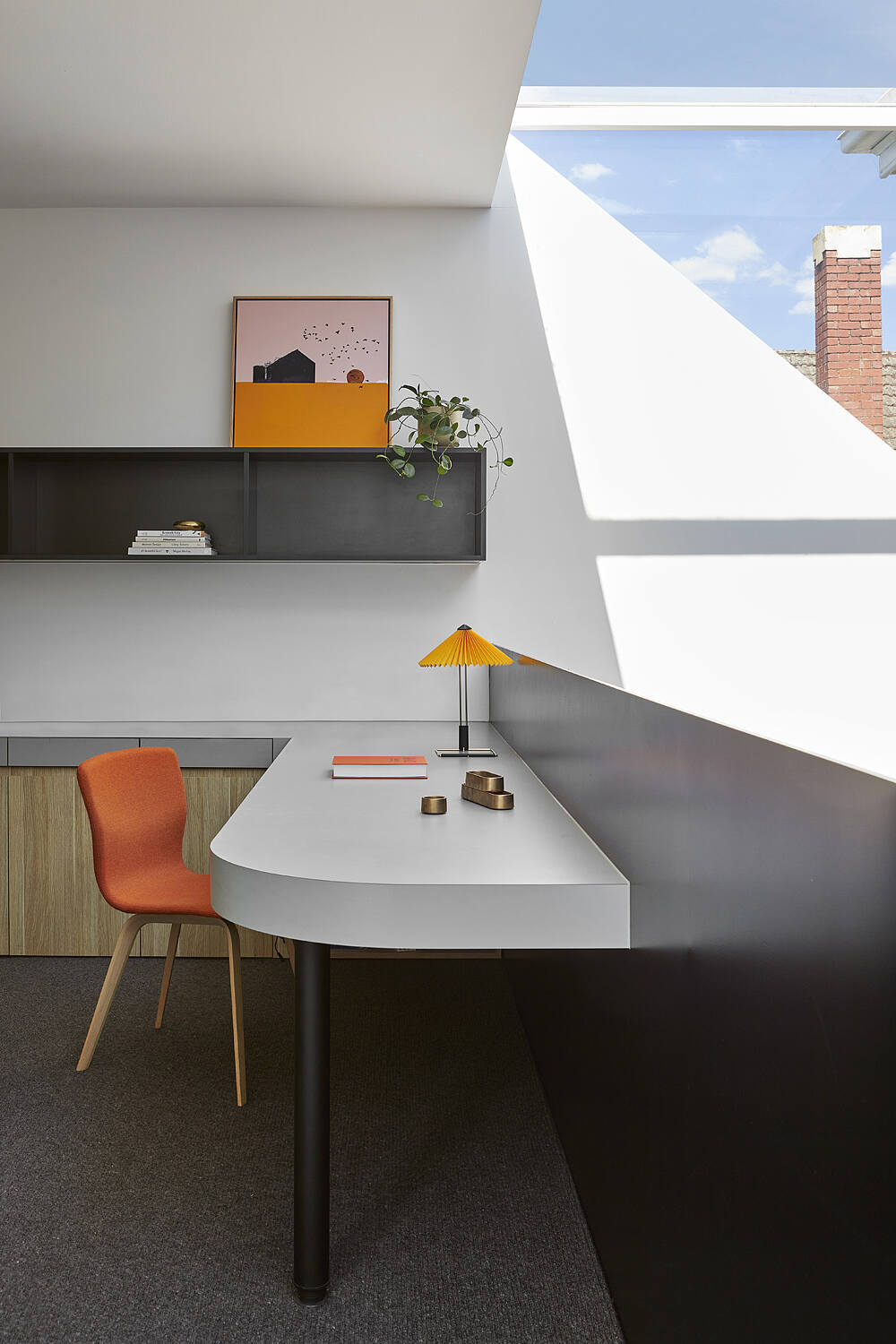 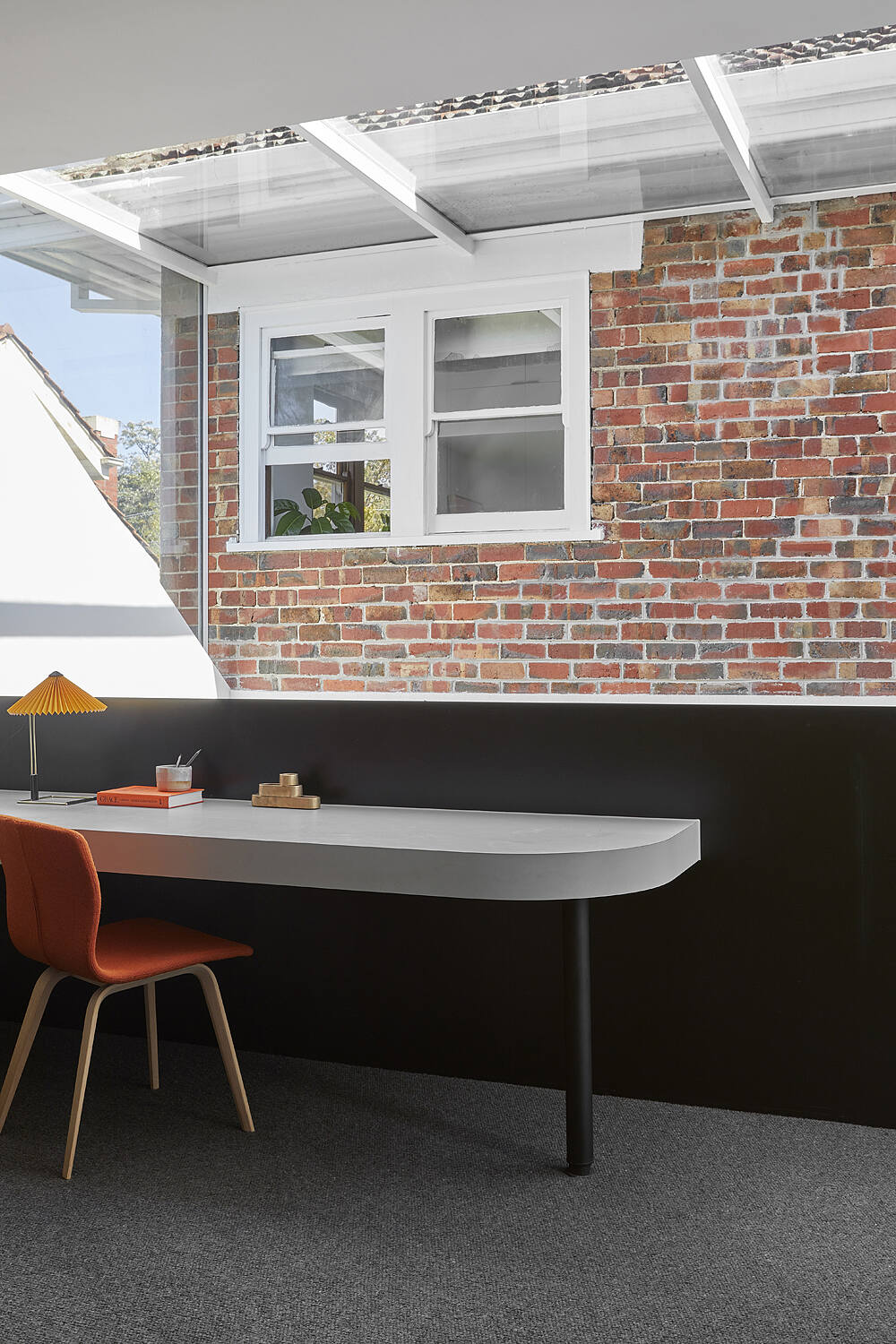 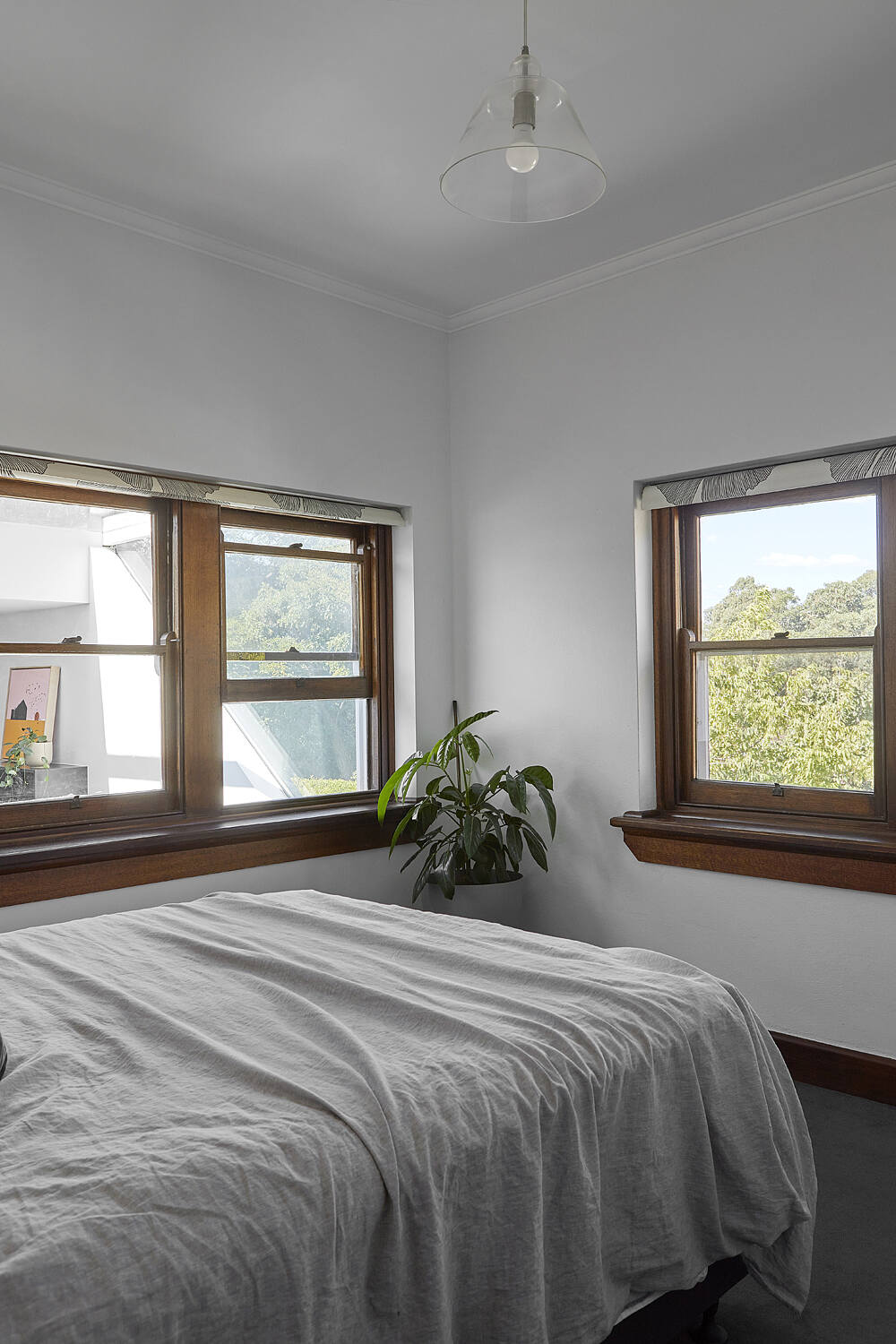 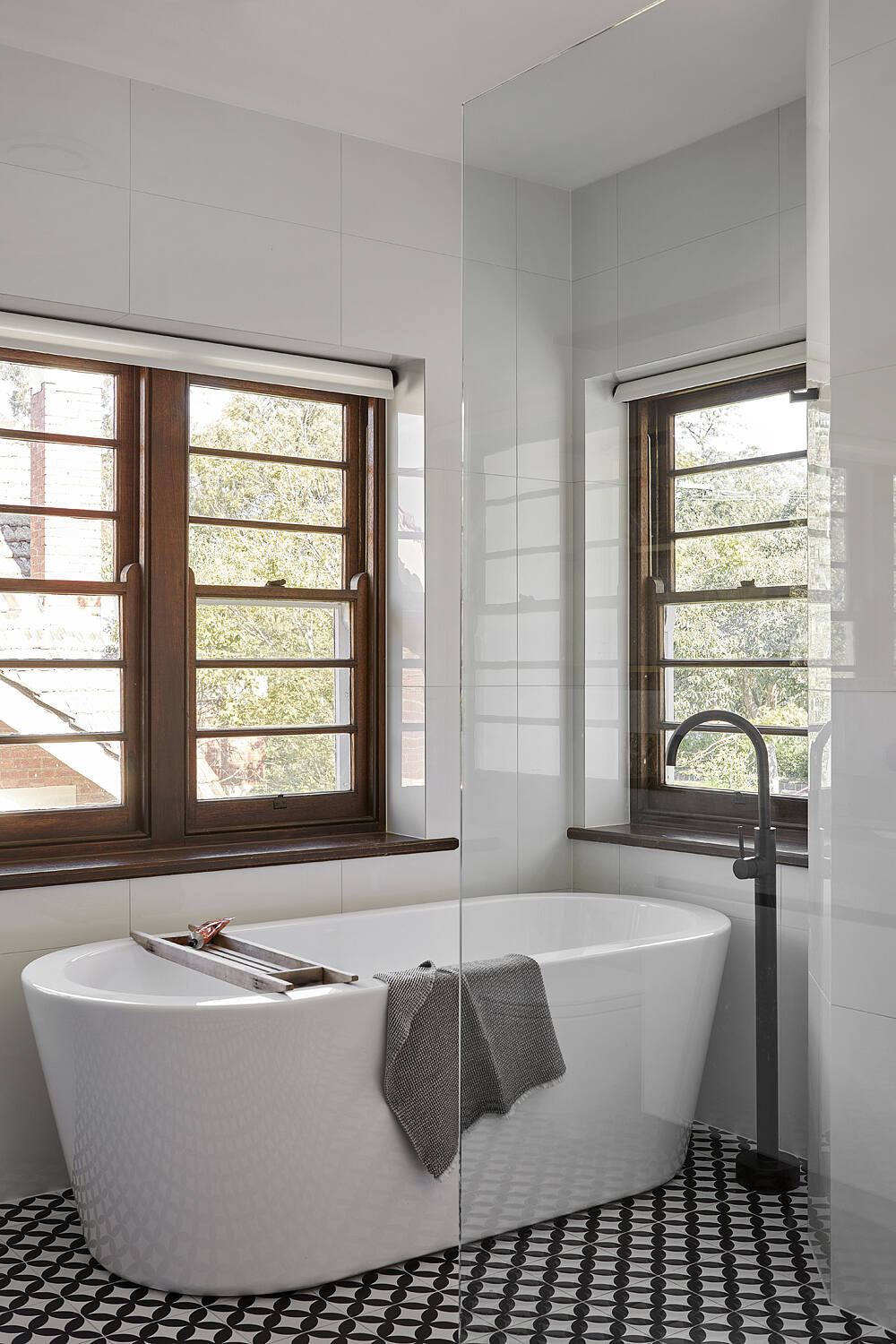 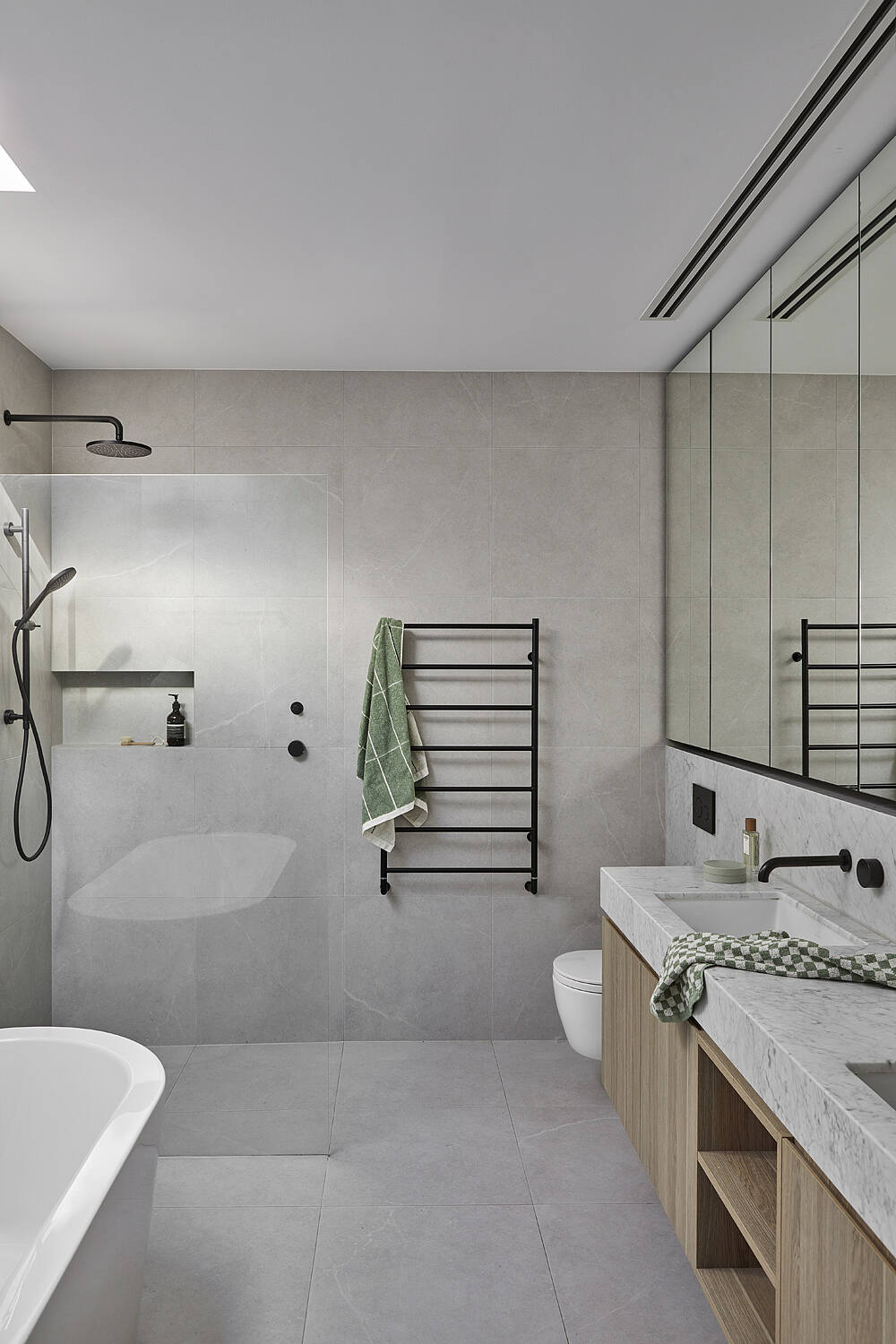 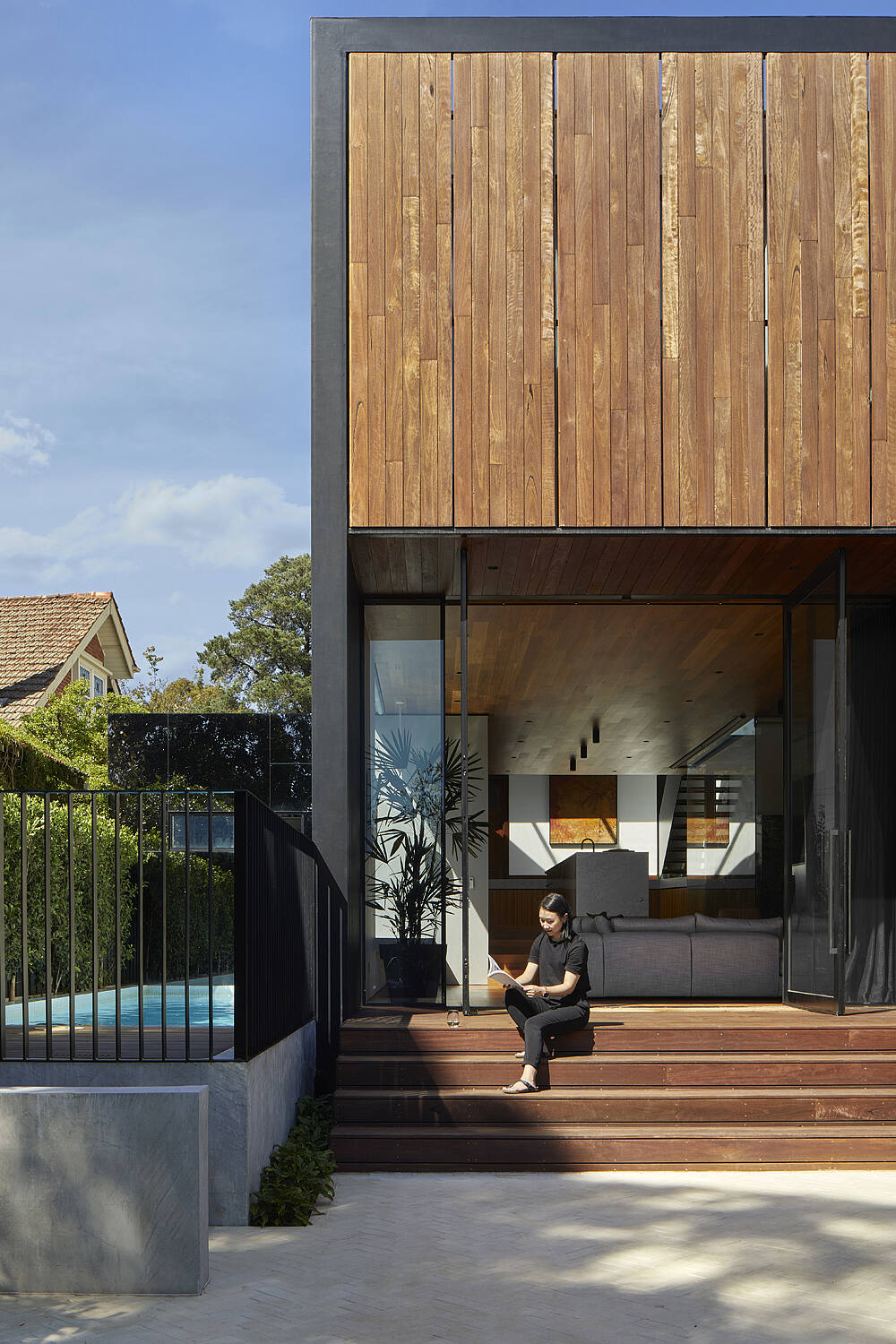 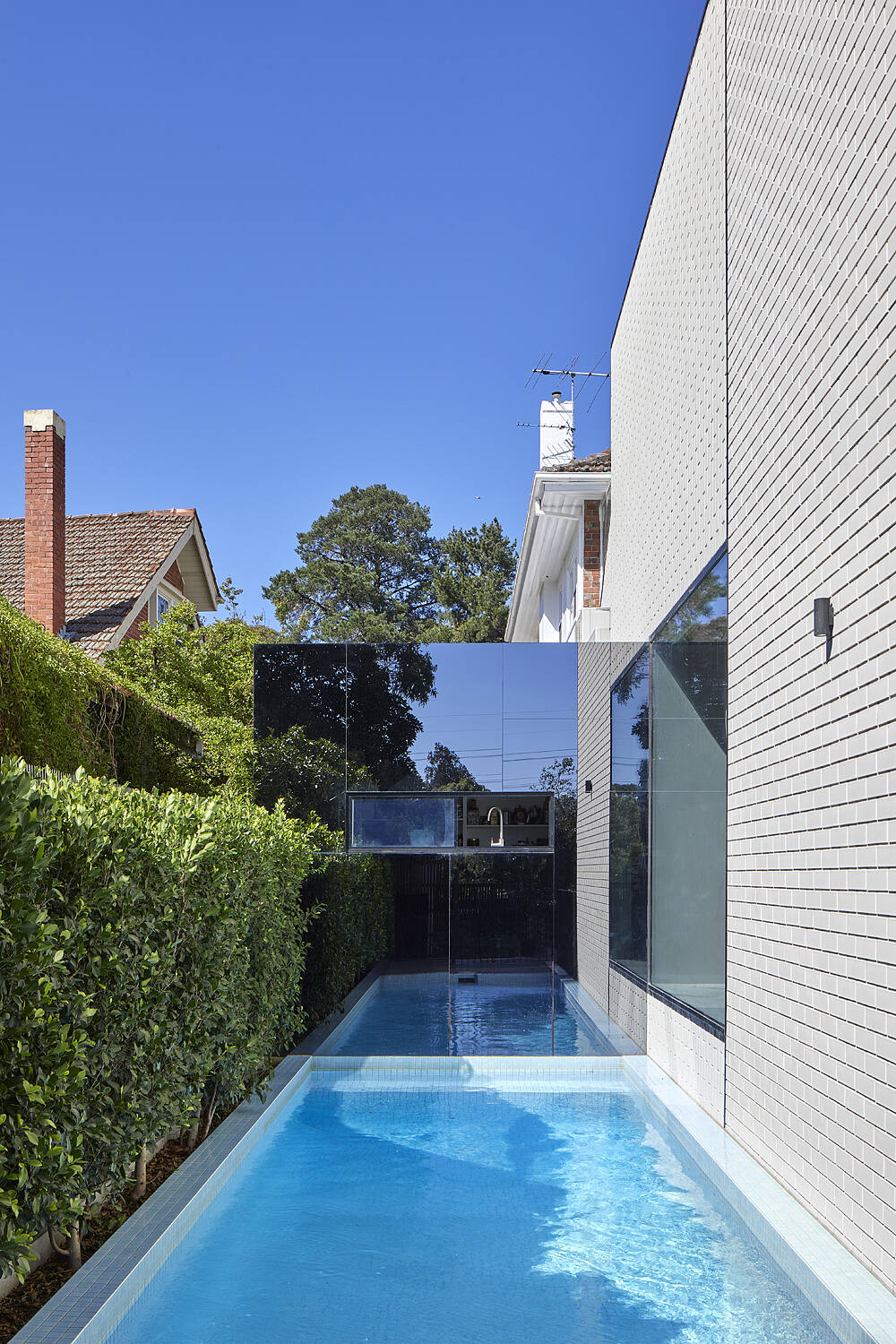 The original period building is one if a pair of semi-detached dwellings, with Art-Deco stylings reflecting its Inter-war era. The building sits on a long and narrow allotment 10m wide and 60m deep with a rearward slope falling 4.2m. The site also backs onto a cricket ground and the Monash Freeway beyond, with northerly winds carrying the sound of traffic to the rear of the property. The owners’ family had outgrown the original building and their brief called for an extension that could be future-proofed and cater to the changing needs of individual family members, particularly their 4 young adult children. The design response had to expand on the functional offerings of the old house as well as ensure that any new addition respected the heritage character and scale of the period home, whilst being a clearly distinguishable yet connected entity.

The design offers private spaces for the inhabitants, housed in two separate buildings connected by a central atrium. The children’s bedrooms are clustered in the old house, physically separate from their parents’ retreat in the new. The narrow hallways of the old house invite exploration, expanding into the double-storey atrium in the physical (and metaphorical) center of the house. Moving deeper into the house, the building responds to the land’s natural fall by cascading a series of tiered living spaces towards the backyard. The space is momentarily compressed again in the Kitchen, before the floor level changes once more and the perception of space swells in the sunken living room and garden beyond.

Openings via skylights, large windows and courtyards not only draw daylight along the length of the buildings, but provide visual relief along the way. Due to the split levels and atrium, the inhabitants can still feel connected visually with each other throughout the house.

As a building of significance, conservation of the front house was imperative. The new addition sought to preserve the front building’s heritage qualities by utlising the fall of the land to tuck itself behind and below the existing roofline, thereby respecting the scale and proportioning of the existing building and adjacent neighbouring dwellings. The new addition is unashamedly contemporary, a clear departure from the architecture of its predecessor in order to distinguish itself and create a counterpoint to the old building. The result is the marriage of two “almost-separate” buildings, connected tenuously via the central atrium and its skylight wedge.

The new addition fulfils the owners’ desire to have 2 generations of people under one roof, yet with the autonomy that each family member has to inhabit each space in their own way. The tiered living spaces inherently allocate specific functions to each “platform” whilst still creating a seamless circulatory and visual flow from front to rear. Here, connections between indoor and outdoor are prevalent and these apertures soften the edges of each programmatic compartment. The new building is also a protective cocoon, sheltering its occupants from the noise of the outside world with its timber shutters and double-glazed pivots.

Our studio took on the role of designing both the architecture and interiors to create a holistic design throughout. The owner, a non-practicing landscape designer, worked collaboratively from the beginning to ensure a seamless marriage of soft landscaping elements with the architecture. The eventual multiple split-levels of the extension demanded a focused effort from builder and structural engineer, especially in dealing with a sloping site with multiple neighbouring structures along boundaries. The connection between old and new needed a “light touch”, and creative solutions were workshopped and employed to tackle the challenges of preserving and extending a period building.