Off the Beaten Path in Venice: Exploring the Jewish Ghetto of Venice


When I see tourists and travelers in Venice, I often think of them as children in a huge ice-cream parlor: overwhelmed by the great variety of flavours, they’ll look around dazzled by such diverse supply but will probably end up ordering the most common tastes. In the same way, the typical Venetian tour will lead you to the usual “top things to see”, which, in Venice at least, are quite spectacular; the sempiternal elegance of Piazza San Marco and the harmonious shape of the Rialto Bridge cannot be missed, but I’d suggest to venture further and explore those places where the real city and its vibrant life lie, because that’s where the Venetian charm will deploy in its whole greatness.

And how could I not suggest you, as a local, an alternative itinerary? My personal choice would be the Venetian Ghetto, world-renowned thanks to our dear Shakespeare. The Jewish Ghetto of Venice, actually, is not just the place where the infamous Shylock would have lived, but indeed it offers plenty of art, food, culture and sights.

Where the word “ghetto” comes from

The Jewish Ghetto was founded back in 1516 and it was actually the first ever built in Europe. At the time, Venice received orders from the Pope himself to expel the Jewish community altogether, but fortunately they opted to squeeze it onto a small island in the district of Cannaregio. The area was surrounded by canals and it was located near a metal foundry, which in Ashkenazi Jews’ native tongue was translated by “geti” and was then transposed in ghéto in the Venetian dialect. Other etymology scholars suggest that the word could either be linked to the yiddish language and the term “get”, which means “deed of separation” – thus underlining its function, or the Italian “borghetto”, which translates “small portion of the town”.

Admire some of the tallest buildings in the whole city

Even though Venice will astonish you with its grand palaces, it is in the Venetian Ghetto that you’ll find the tallest buildings of the city. You may even notice a few synagogues squeezed between houses and other edifices. Why so? Well, the Jewish community was twice as large as it is now, and counted around 1,000 Jews who had to fit on this very small island. As the ghetto couldn’t expand horizontally, it grew upward to supply the needs of the growing community, so that’s exactly why you can now see these particularly tall buildings.

How to get here

You’ll find the Jewish Ghetto just after the Guglie Bridge, following Strada Nuova. Once off the aforementioned bridge, turn immediately left and go straight until you reach the Sotoportego del Gheto Vecchio on the corner with the Gham Gham Kosher Restaurant. This is the entrance where the former gate lay. Follow this tiny and dark street and it will be like stepping back in time, far away from the touristy and crowded streets of Cannaregio, in a place which seems as if it just popped out of a movie. Have a look around the shops of the area; you may even spot a few men in a black and white attire with curious beards and witness some real Venetian life going on.

Things to do in the Jewish Ghetto of Venice

Visit the Jewish Museum and the synagogues

Even though the Ghetto is a beautiful area in itself, I really suggest to visit the Jewish Museum and the synagogues to get a basic knowledge of the history of the place and really appreciate it. You can visit both with a budget-friendly guided tour.

Taste some Jewish food delicacies at the Gham Gham Kosher

I tried them myself this summer with some friends and I can only say: exquisite. My personal tip, if you’re in a group, is to order lots of different courses and ask for some additional empty dishes to share food and get to taste as much as possible.

Buy some sweets and sit on a bench

Next to the restaurant you’ll find a Jewish bakery offering a good variety of cookies, pastries, and so on. Try them. Buy something you like and sit on a bench in the main campo. Relax, take your time and have a look around!

Stop by the Ikona Gallery

One of my final tips is to visit the Ikona Gallery, which is located in Campo del Gheto Novo. The Ikona Gallery offers a free photography exhibition held in a tiny but beautiful room. Though the gallery is not big, it has hosted some very famous photographers in the past such as William Klein, Robert Doisneau and Helmut Newton.

Time to relax… how about a beer?

You’ve eaten, drunk, walked and learned a lot, so I’d say it’s to time to relax. If you leave the Ghetto and reach Fondamenta degli Ormesini, you’ll find the beer house of your dreams. Head to “Birre da tutto il mondo o quasi”(Beers from all over the world or nearly) to relax and sip a beer chosen from the great selection offered and friendly explained by the owner. You’ll find the most unusual tastes and quite a few locals, but if beer is not your thing, you may head to Paradiso Perduto (Lost paradise) and eat or drink something in front of a picturesque canal. 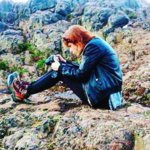 Iris Pase is an Italian writer, travel and culture enthusiast currently based in Venice, where, in her spare time from eating and wandering, she studies History and Philosophy. After her erasmus in Amsterdam and a deeply coveted degree, she plans to bring whisky and haggis, move to Scotland and pursue a career in Journalism. Follow her on her blog , on  or .