Meet the young Caribbean couple who run a farm in Curacao


When I visited Curacao last week, I bumped into Josh and Femi Peiliker, a young couple who decided to move back to their home country after having lived and studied in Amsterdam for five years. When you’re from a tiny Caribbean island and in your mid twenties, that in itself is quite unusual. But not just that: They also decided to start a farm and a farm-to-table restaurant: . Wait, what? So today, surrounded by banana trees, donkeys, and surprisingly green fields, Josh and Femi invent dishes around the harvest and inspire the local community to grow their own stuff. Needless to say, I was wildly inspired and grabbed Femi straight after ordering my brunch for a Q&A in the shade. 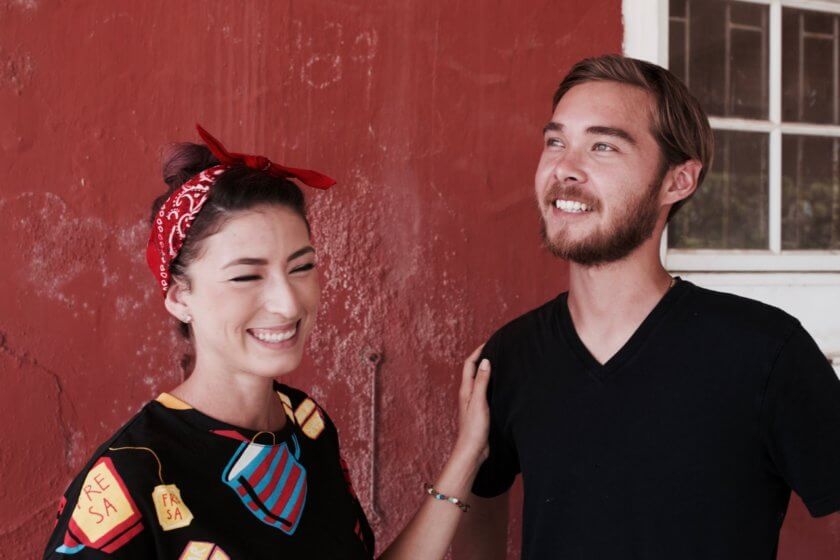 Femi, tell me a bit about yourself!

I was born and raised in Curacao, and so was my husband Joshua. We met here, but Joshua moved to the US for his recording arts studies, and then we both moved to Holland. I never thought I would come back. I was 18 and I thought, I’m leaving this tiny rock and I can’t wait to get out of here to see what else the world has to offer. 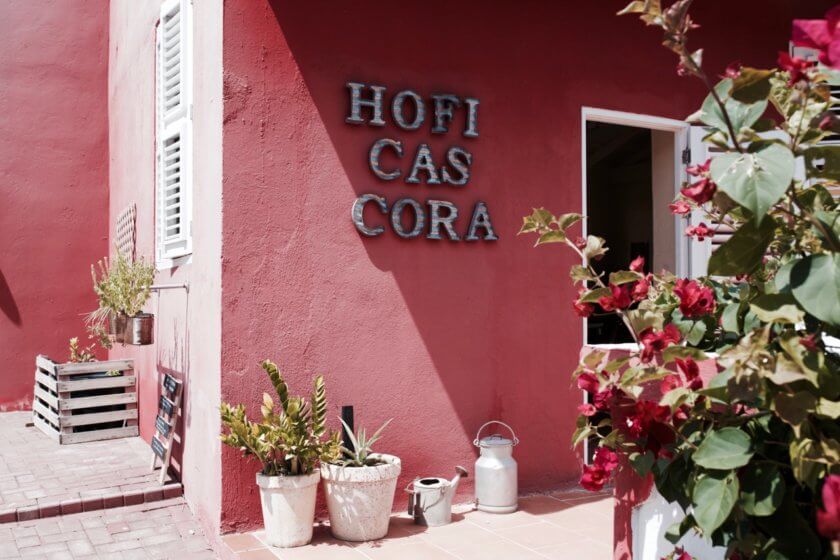 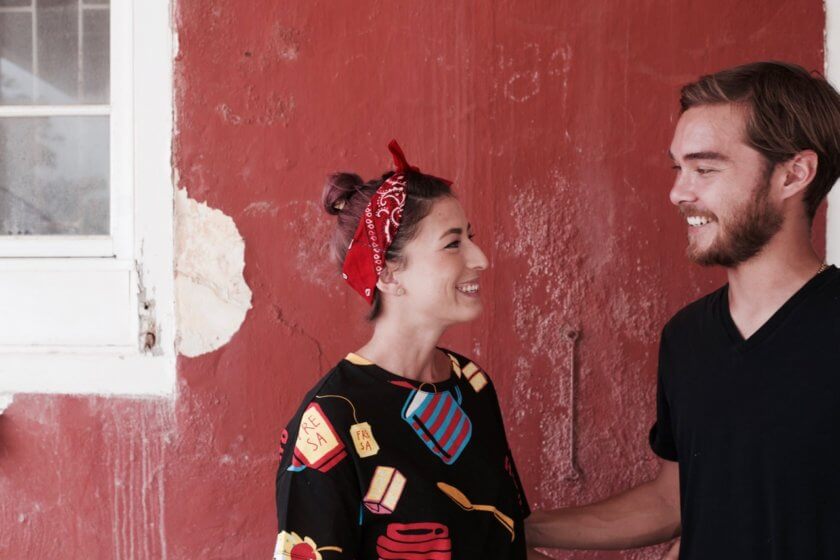 But it all turned out a little different it seems! What happened in between studying marketing in Amsterdam and running this place here?

So I started my degree in marketing and specialised in branding. I took a little longer with my studies because I didn’t know what I wanted to do. I always used to go to the farmers’ market to get fresh produce and my mum always cooked at home (so for me, it’s weird to go out for dinner or lunch all the time). And a few years into living in Holland, I asked Josh: could you imagine having a little coffee shop? I was thinking with baked goods and stuff like that. 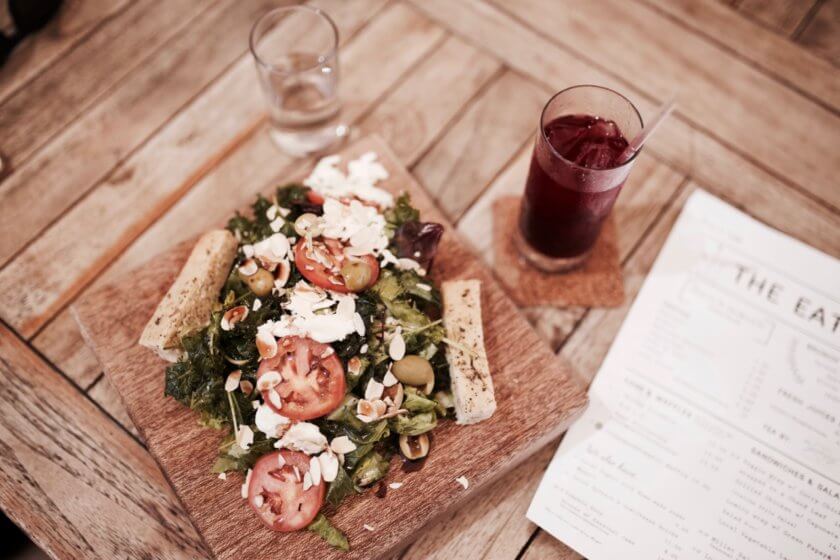 Four years ago, Joshua’s parents bought this property here. Time went by, and when we came here on vacation they showed us the place. We were convinced we had to do something with it; I didn’t really know what but it was obvious there was so much potential! It’s so green and it’s so centrally located. Around then I was about to graduate and I didn’t know what to do. The question for me was, would I apply for a job in Holland with tens of thousands of other applicants, or would just go for it here? So after graduation, we came back and decided on the latter. Our initial idea was to start a bed & breakfast but that idea quickly shifted because Joshua took over the farming. 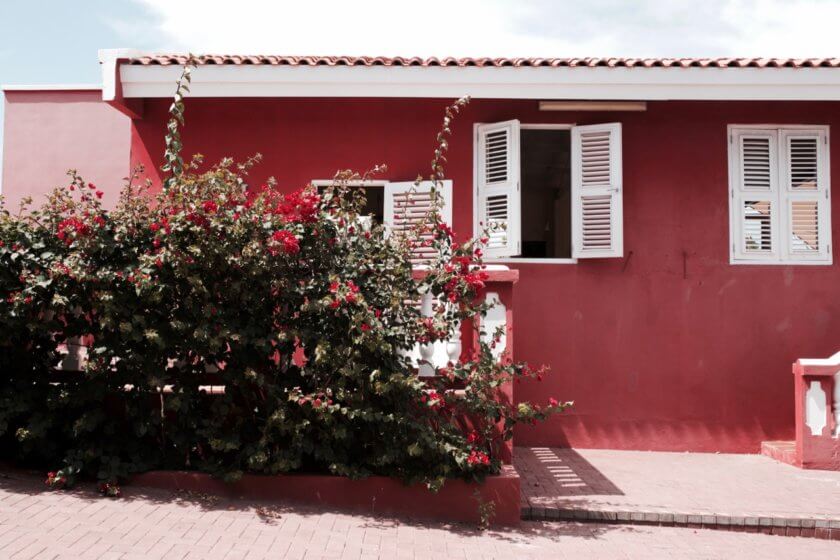 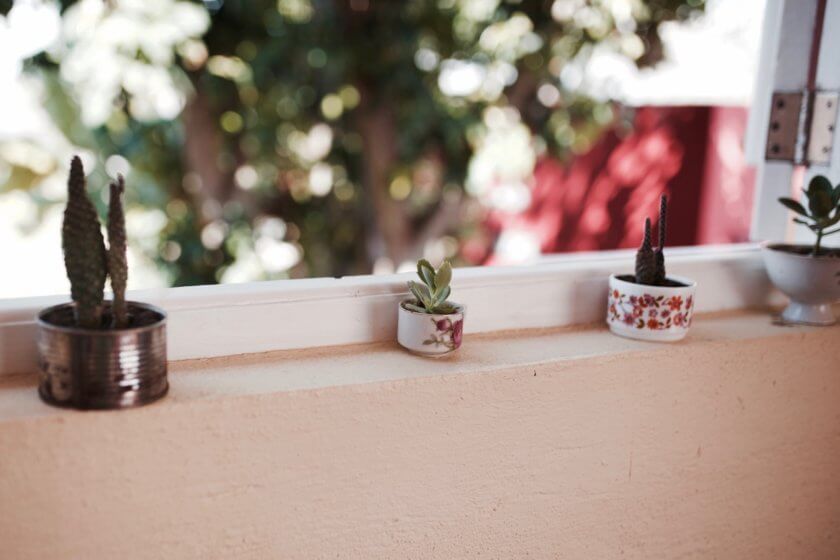 So the next best thing was a farm-to-table concept. We thought, we had the farm; why not raise awareness by using what we grow in our own backyard? We wanted to inspire people to grow their own stuff. Since we started, the business and farm has grown so much and we’ve received so much positive feedback. 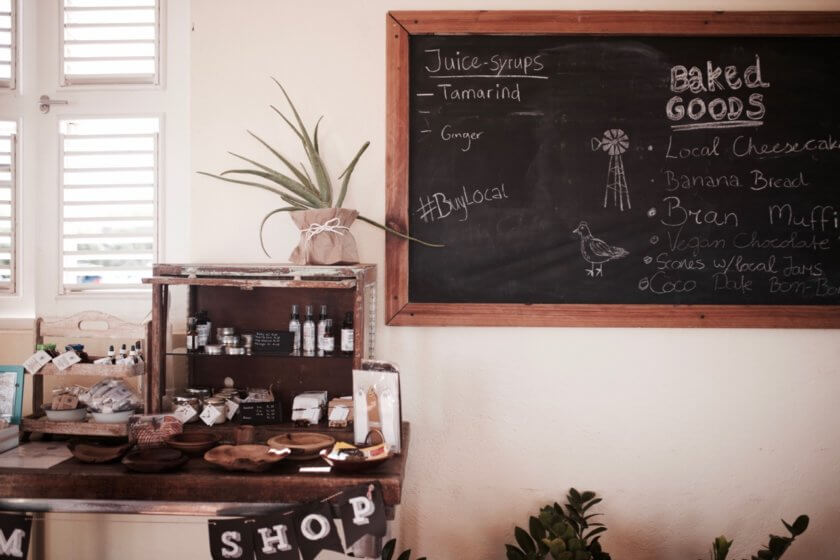 Why was it important for you guys to move back to Curacao?

In the first place, leaving is sort of expected from you because Curacao is very small and the college opportunities are limited. Once you go live abroad, you’ll get into a different mindset. So there has been a gap in people moving back, a lot of people who are now in their 30s never came back to Curacao. We have many old people here (laughs). But that has slowly changed over the last two or three years. People start to realise that the way of living here is just so easy going and they appreciate it. Curacao is an island and it’s actually a very well developed one, but we’re still always behind on trends; a lot of young people see this as a chance to start something on their own. This past year some really nice coffee shops, restaurants, and concept stores have opened and have been really well-received. We have a lot of influences from Europe and the US. 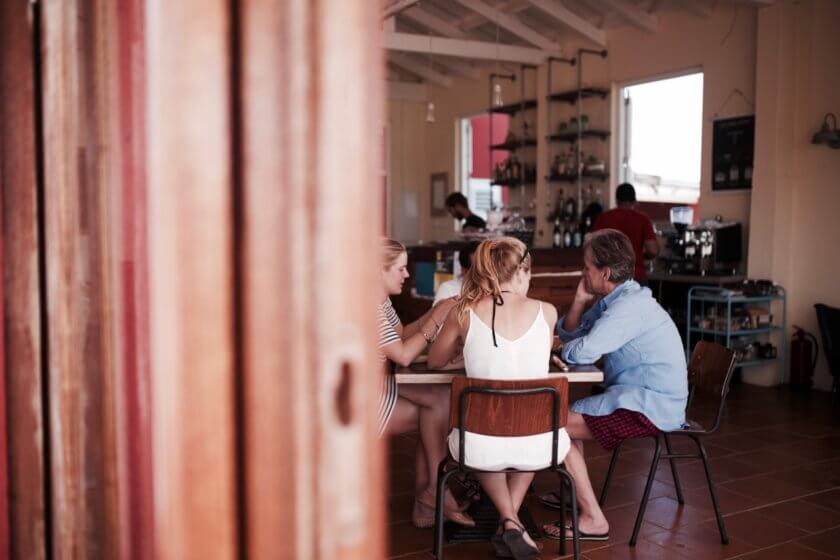 This place here is absolutely stunning! Where do you personally get your inspiration from?

I like to repurpose things. I often take look on the side of the road and see if there’s any furniture. Of course I try to work with natural elements, like wood and other recycled stuff. With the farm and especially the restaurant, I love the rustic feel of it. We fixed up the Eatery really nicely, but I still like the exposed brick and the falling-off paint. You see that in Europe a lot more, people in Curacao like to keep their clothes nice, it’s a lot more about appearance here (laughs). But as for me, just give me some crates under a tree and I’m happy. 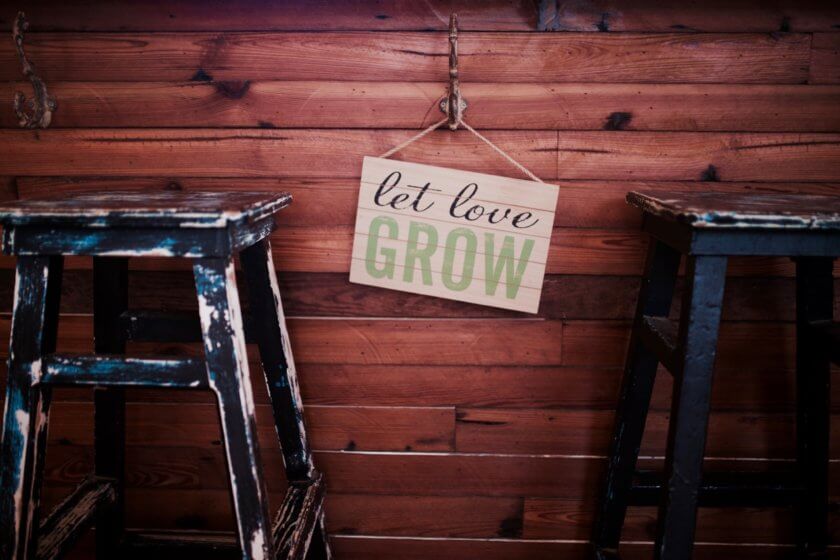 You and your husband have been business partners from the start. I imagine that must be quite tough sometimes?

I never believed in marriage, I never thought I’d ever get married, let alone work with my partner but hey. Actually, we work very well together. Josh is very hands-on, if something needs to be done, he’ll do it. And I can be somewhat chaotic and love to do everything all at once. He grounds me and says: “Let’s not do everything at once, step-by-step is way better”. Or, for example  I’m really good at making lists and planning and he isn’t. We make each other stronger. It still works, so we must be doing something right (laughs). 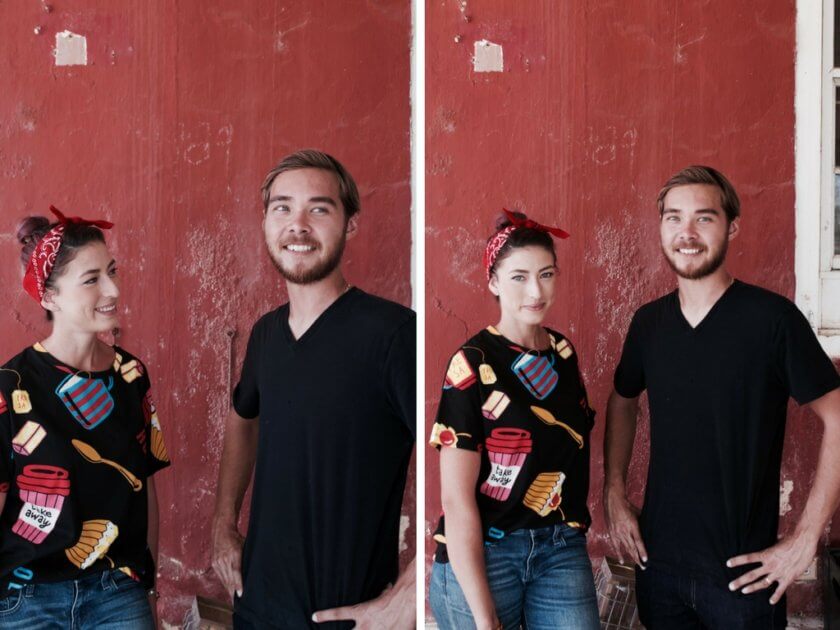 How do you actually spend your week?

Well, we’re our own bosses so there’s no one really to kick our butts! The restaurant is only open from Friday to Sunday for breakfast and lunch; additionally, we rent out spaces for private events and during the week we focus on our farming and other projects. From Monday to Wednesday we have yoga here each day, then in the middle of the week Joshua sells produce to the supermarkets and we talk about how we can develop the farm. Just now the guys are setting new pipes to extend the field in the back. And then we still have to do groceries; often we go farm-hopping and pass by all our farmer friends to get some extra stuff for the restaurant. 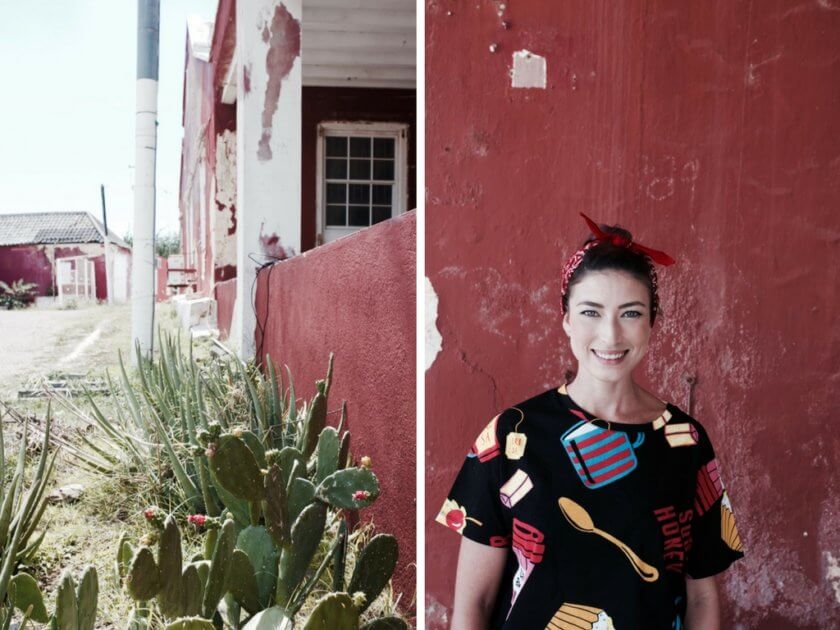 What are your plans for the future?

It’s an ongoing project. We have so many ideas and I can’t share them all because they’ll shift within a year. But we work together with a Jamie Oliver ambassador and she cooks with kids regularly. We got in touch last year because we’re passionate about teaching the younger generations about how to eat real food. She went to local schools with this project but they said they don’t have a budget. So most her clientele are private school kids – but over the last few months, we have gotten people to sponsor children from local schools or orphanages to come out here for a field trip. 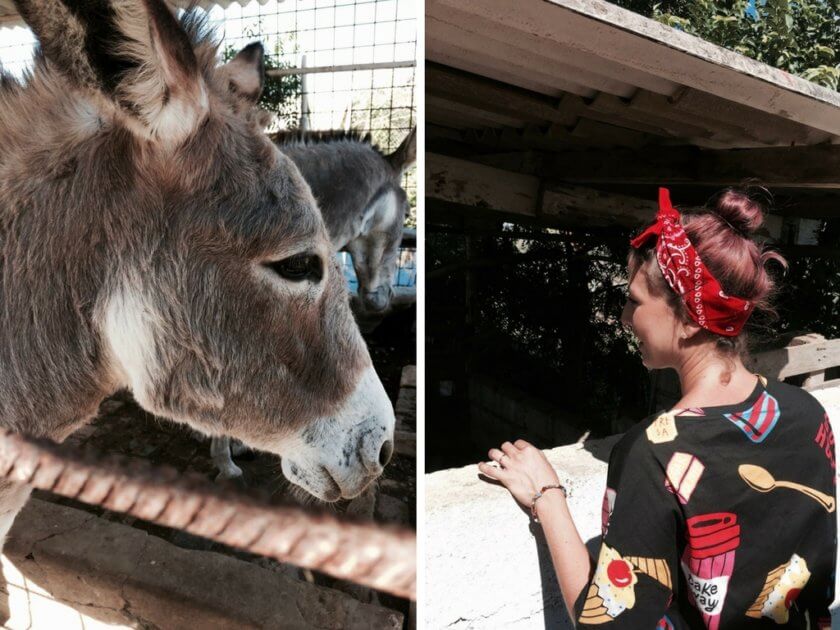 This is such a great life, I’m kinda jealous!

Well, sometimes you wake up and it doesn’t feel like it, especially when you have a lot of animals. They don’t always make it, which is hard. But then sometimes you wake up and suddenly there are baby pigs! There are a lot of ups and downs; sometimes half the crops are eaten by iguanas, and other times there is a huge harvest of beautiful red tomatoes. But at the end of the day, it’s just so nice to be able to just walk around in nature.

Thank you Femi for taking the time to answer my questions on such a busy and hot Saturday.
All the best with all your plans and adventures, you are super inspiring. x