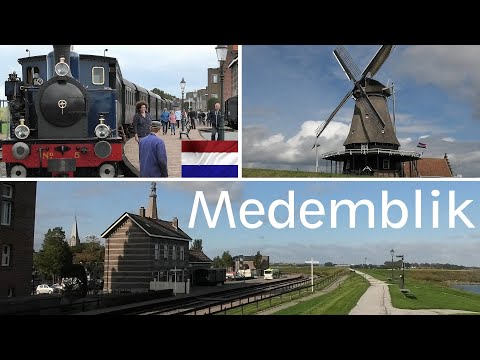 Medemblik is a town (and municipality) in the Netherlands, in the province of North Holland. It is best known in Europe for its sailing events. Medemblik has a picturesque small innercity with many houses from the 17th and 18th century, two big churches, an old orphanage, a town hall and, of course, castle Radboud, which is just at the border of the innercity.

Medemblik is located on the IJsselmeer (lake) that was created by closing off part of the Zuiderzee (sea). The lake was named after the river IJssel, which flows into it.

Medemblik Station is the railway station and terminus of the tourist railway (museum line) Hoorn – Medemblik. The station dates from 1886.

The windmill at the Westerdijk, now called ‘The Herder’, can be seen on local maps since 1555. After almost 400 years of service the windmill was demolished in 1947. In 1985 the wooden back of a 300 year-old Zaanse oil windmill was purchased and brought to Medemblik. From 1986 enthusiastic volunteers and professional windmilll builders started to rebuild the windmill. On the 9th of May 1990, the windmill was officially opened by H.R.H Prince Claus. Presently, the flour mill (and flour shop) can be visited. https://meelmolendeherder.nl

The Poorthuis (cottage), like the windmill ‘The Herder’, can be found in the archives and on various historical drawings since 1500. The gatekeeper lived in the cottage, who locked the city gates at night and against threats from outside. During the rebuilding of the mill from 1986 to 1990, the cottage was also rebuilt according to the original example. From 3rd of May 2014, the cottage is used as a catering facility with terrace.

Radboud Castle is one of a number of castles in North Holland. The building was commissioned by Floris V, Count of Holland. The castle dates from 1288. https://kasteelradboud.nl/en/

The Hoorn–Medemblik heritage railway, operated by the Museumstoomtram Hoorn Medemblik, is a heritage railway. It runs from Hoorn to Medemblik city, a distance of about 20 km (12.4 mi). The railway is operated as a tourist attraction. The centrepiece of its collection is the former Nederlandse Spoorwegen locomotive 7742 Bello, the only preserved light steam engine in the Netherlands. Other steam locomotives in running order include three tramway engines, two of which are enclosed tram engines (steam dummies). The remaining ones are: three industrial engines; a German engine which is rebuilt as a replica of a Dutch railway shunting engine (of a series of which several also served on steam tramways); and a locomotive of industrial type which served at a steam tram company in Zuid-Holland, still awaiting restoration. One of the industrial locomotives is on a long-term loan to Museum Buurtspoorweg. Seven of the ten steam locomotives are official Dutch railway monuments. https://www.stoomtram.nl/en/