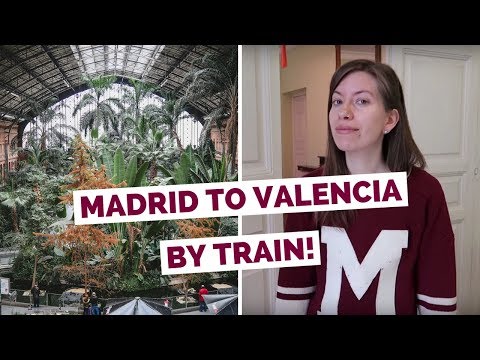 Join us for a Spain travel vlog as we highlight our train ride from Madrid to Valencia while also giving you a full tour of our apartment in Madrid. With just a short time in Madrid we reluctantly said goodbye to our apartment which was by far the best one we’ve had to date on this trip in Europe. It was in a great location, was very spacious, had lots of character and most importantly had central heating in the heart of winter which meant we were toasty warm:

Upon arriving at Madrid Atocha railway station we quickly grabbed some sandwiches and empanadas for the journey. One thing to keep in mind is that prices were really high near the departures section and considerably cheaper at the far end of the station.

Given this was our first train ride in Europe we were all excited to be taking the train as opposed to being on another bus. Alta Velocidad Española (AVE) is a high speed train that allows you to travel from Madrid to Valencia in just an hour and a half. It tops out at around 300 km during some sections of the ride.

Upon arriving in Valencia we just grabbed a do-it-yourself meal of kebabs, pastries and red wine. We took a little stroll around Valencia afterwards but ended up calling it a day because it started raining. Overall, we’re thrilled to be in Valencia and can’t wait to explore more on future episodes.

Good morning guys. Time for another travel day. We didn’t have much time in Madrid. It was one of the shortest stays we’re going to have on this entire trip in Europe. We just had 4 nights but we arrived really late on the first night. So it was basically just 3 days. Time just flew by. We had so much to do and see and yeah we’re already hitting the road again. But the good news for at least for us is that we have a shorter travel day today.

Okay so before we check out of the apartment in Madrid we’re going to give you guys a little as usual.

Yeah, we really liked the apartment. It has a nice big bed. Lots of space. Drawers. And yeah this was this like this apartment scores so highly in so many different ways. Like for first everything that should be working was. Especially in the winter. Having heat was just incredible after being cold in the 1st two Portugal apartments.

The other thing too that was great about this place was the location right? Very central. It was a nice neighborhood and it was really close to what was it Opera Station?

That concludes the apartment tour. We’re all packed up now. We’re just going to have a quick snack and then it is off to the train station. And wait until you see this train station. I think it is the most beautiful in all of Europe.

Here is to our first train ride in Europe. Salut. Not only train ride. Fast speed. Highs speed train ride. It has got up to 230 km now. I haven’t checked for a while but it might even be faster. And we’ve got wine. Cheers. Our trip is only an hour and a half. We’ll be there before we know it. This this kind of train is a high performance gazelle.

So we made it to Valencia, Spain. We’re having kebabs for dinner and we’ll see you guys in the next episode.