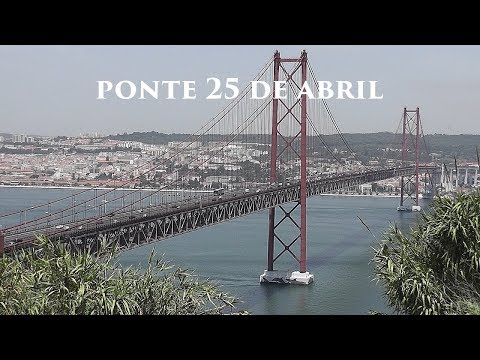 Ponte 25 de Abril is a Portuguese suspension bridge connecting Lisbon to the municipality of Almada on the left (south) bank of the Tagus river.

Because it is a suspension bridge and has similar coloring, it is often compared to the Golden Gate Bridge in San Francisco, US.

It was built by the American Bridge Company which constructed the San Francisco–Oakland Bay Bridge, but not the Golden Gate.

With a total length of 2,277 m, it is the 27th largest suspension bridge in the world. The upper deck carries six car lanes (70 m above water), while the lower deck carries two train tracks (since 1999).

Until 1974, the bridge was named Salazar Bridge. The name “25 de Abril” commemorates the Carnation Revolution in 1974.

Several movies have been filmed on the bridge, including some scenes in the 1969 James Bond film On Her Majesty’s Secret Service.