Light With No Limits: Lasvit Collections Illuminate with Love, Light and Glass.

Something magical is happening at . Stories are being told through stunning light and glass installations. Traditional craftsmanship and modern innovation are being pushed to the limits. Creative collaborations are redefining techniques, materials and forms.

A new era of glassmaking is upon us and Lasvit is leading the way.

The lighting brand, founded in 2007 by Leon Jakimič, is shining a spotlight on Bohemian glass and is on a mission to bring it into the next millennium. Since its beginnings, the company has grown rapidly and purposefully, fuelled by a desire to combine old techniques with cutting-edge innovation.

has supported for over six years, bringing its extraordinary collections to the Australian market. Through a shared vision with Lasvit for inspiring pieces that reflect the identity of their origins and celebrate the ultimate artistry, Living Edge provides their lighting collections, suitable for a full range of applications, where the only limit is one’s imagination.

Lasvit’s exceptional custom lighting installations and ready-to-shine collections are scattered across thousands of locations, from hotels, public spaces and cruise ships, to private residences and yachts. 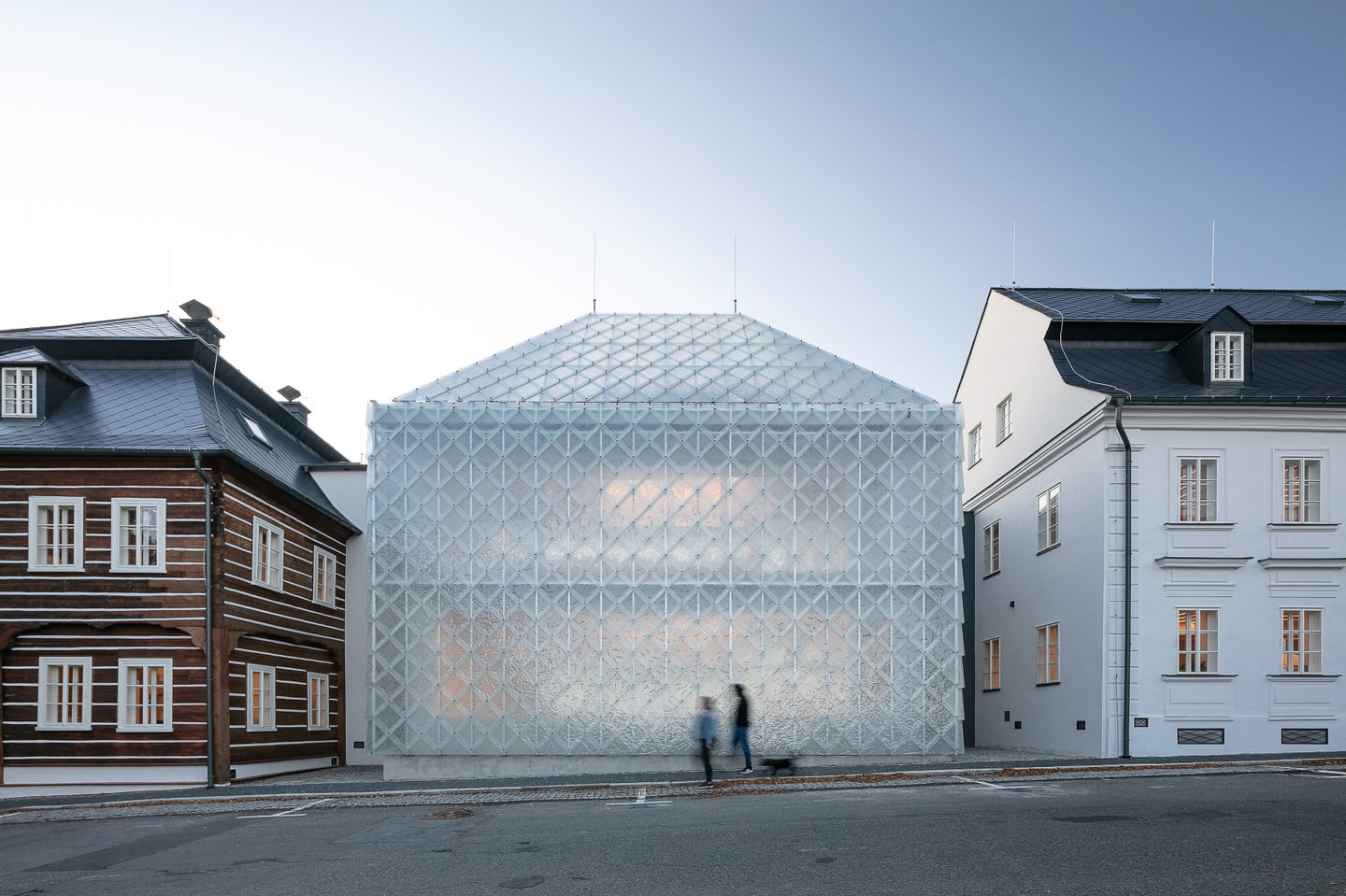 Glass House is Lasvit headquarters on Palackého Square in the Czech town of Nový Bor, designed by Czech architects , founded by Štěpán Valouch and Jiří Opočenský. This project regenerates the region’s glassblowing tradition and restores precious historic buildings, with a cleverly designed master plan that accommodates old and new, traditional and innovation with the addition of two spectacular buildings, one entirely clad in glass tiles. 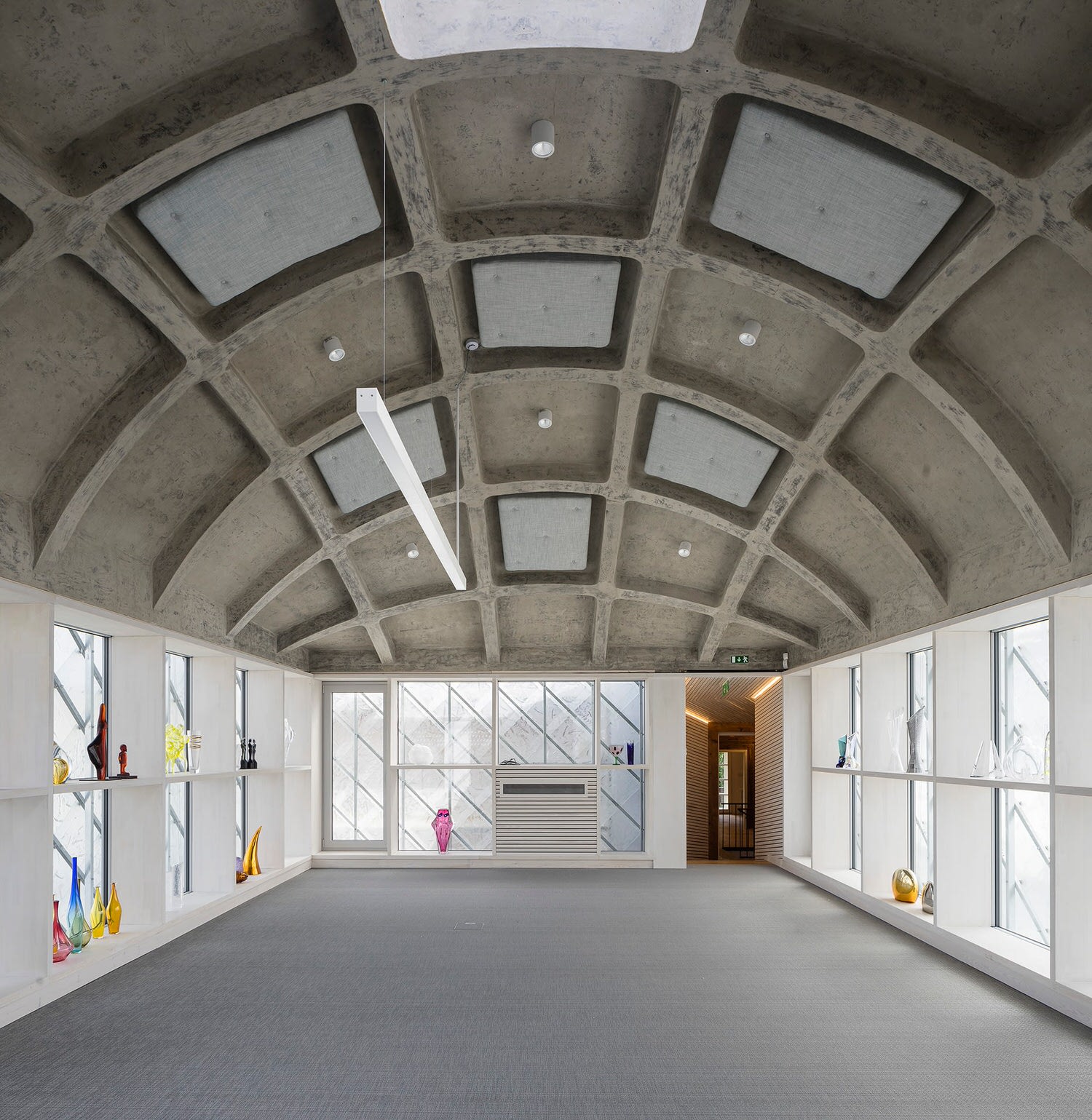 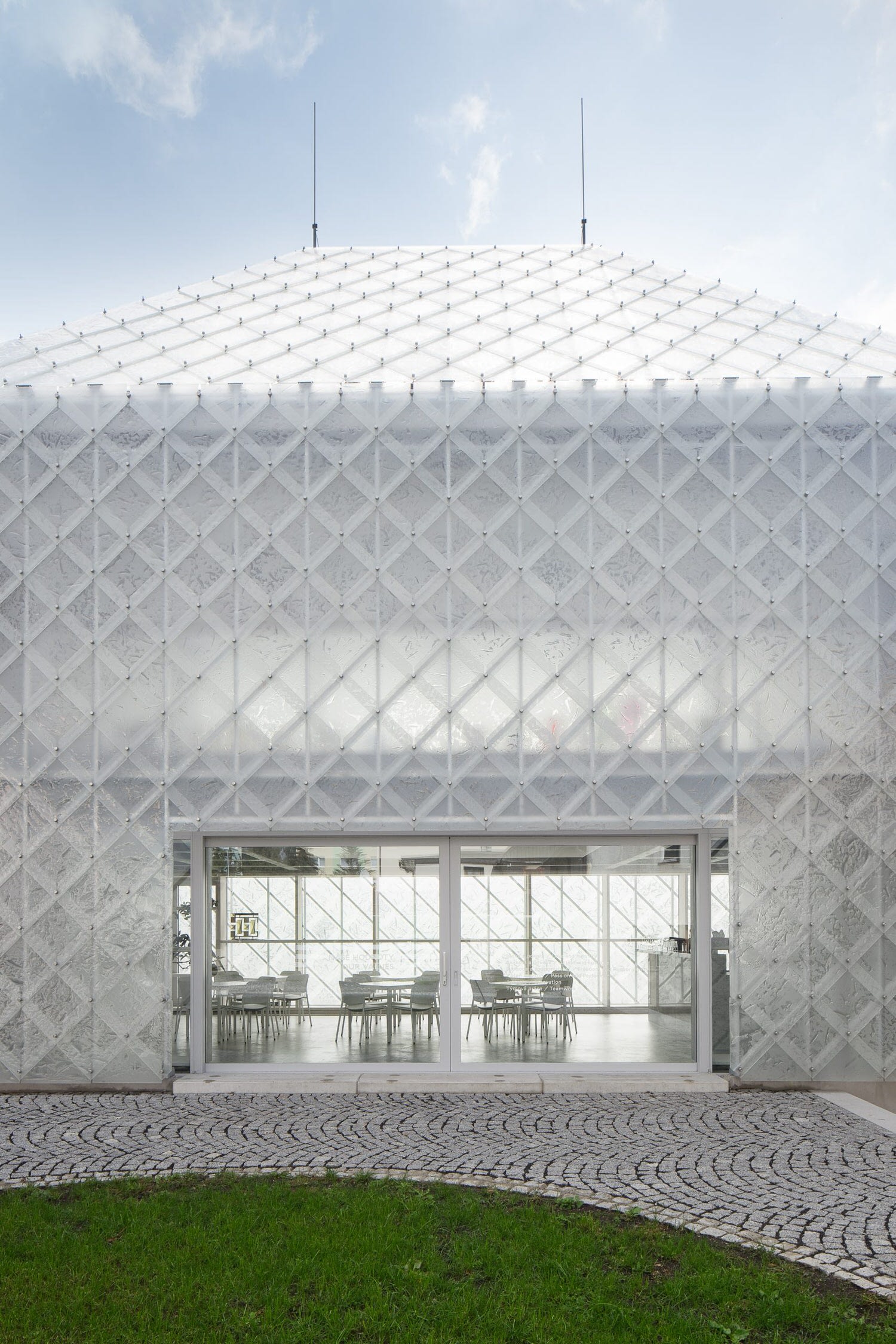 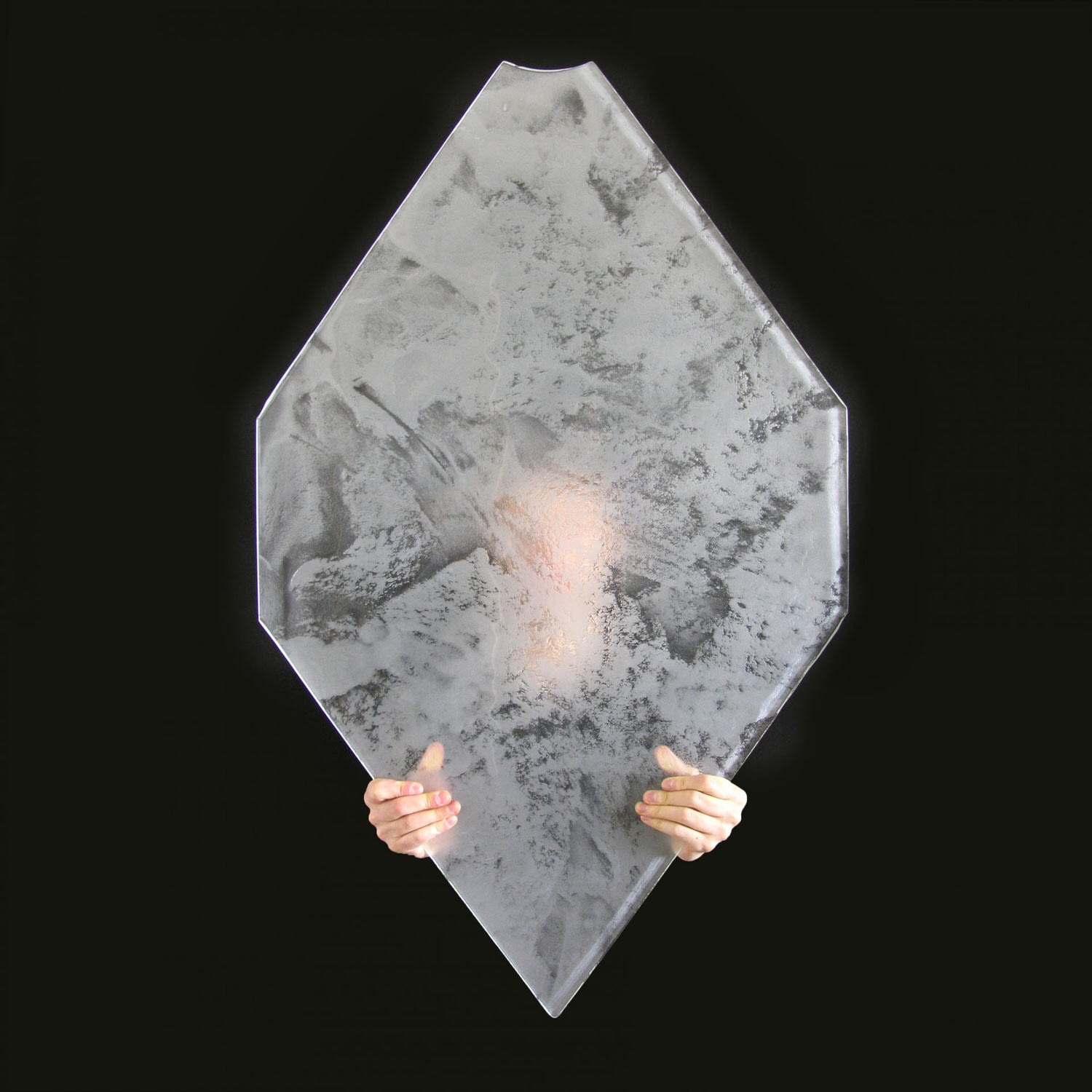 Glass tile cladding detail from Lasvit’s headquarters. Wowzer. Over 1,400 custom glass tiles were used for the facade. A system was devised so the tiles can be removed and reused on future projects. 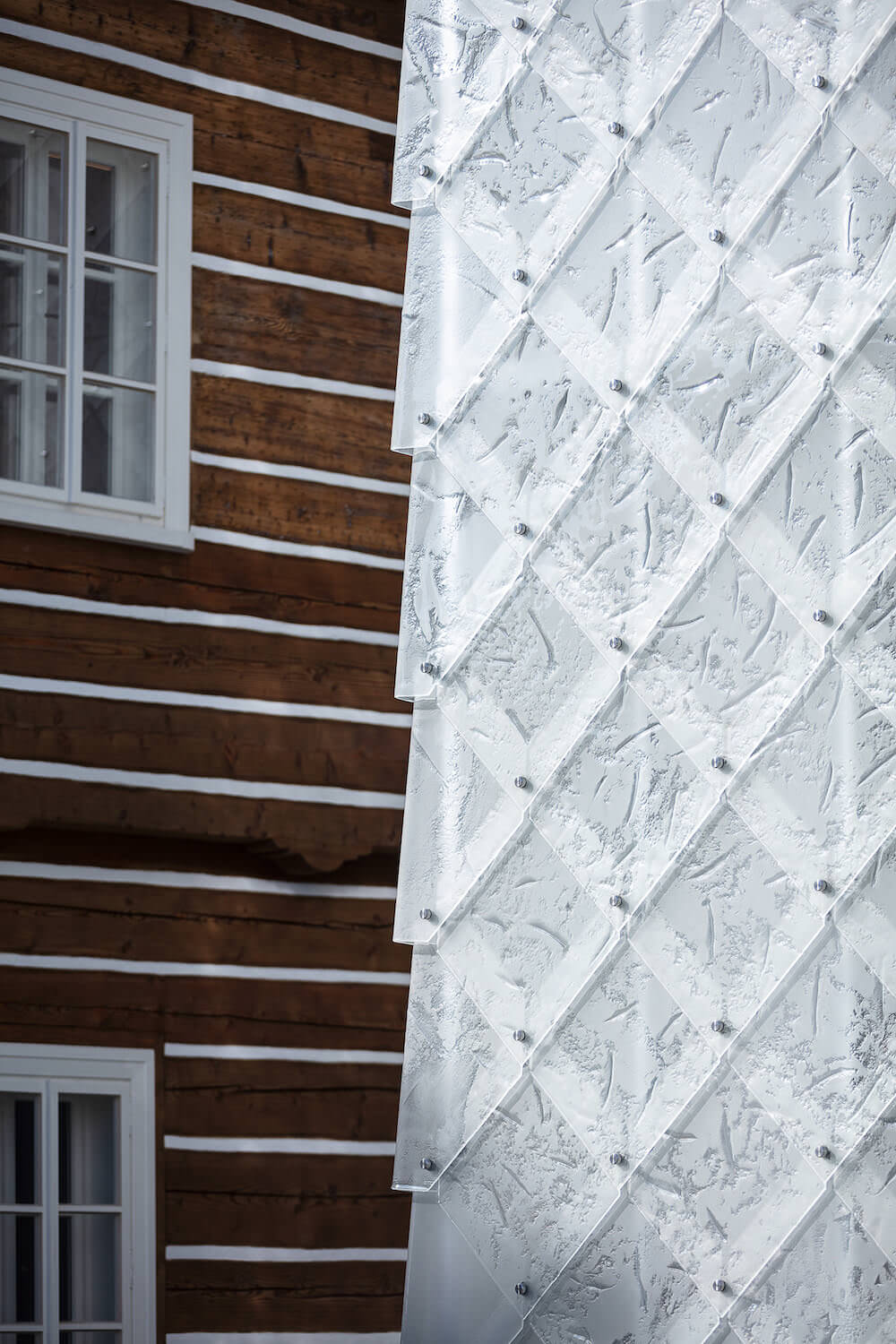 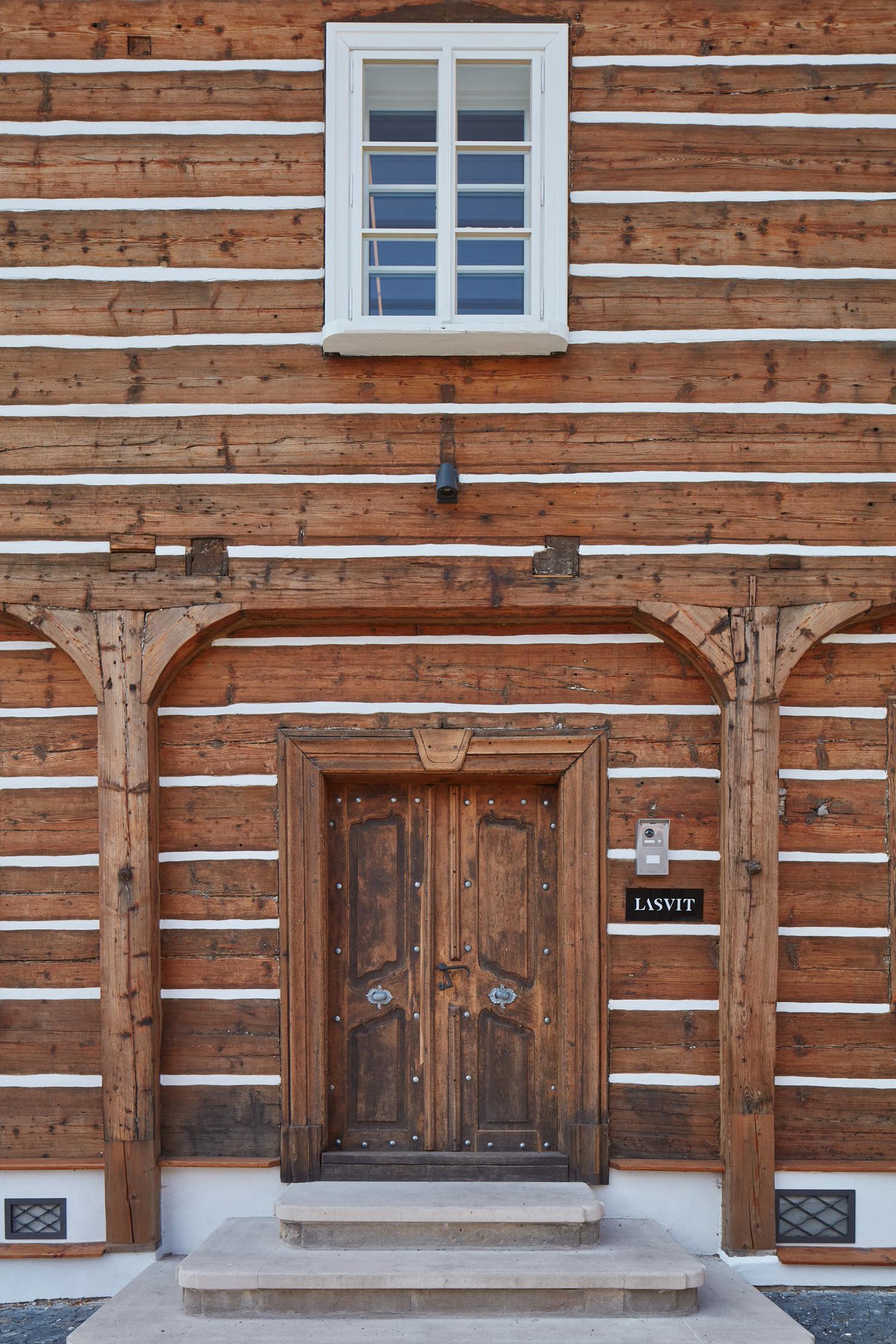 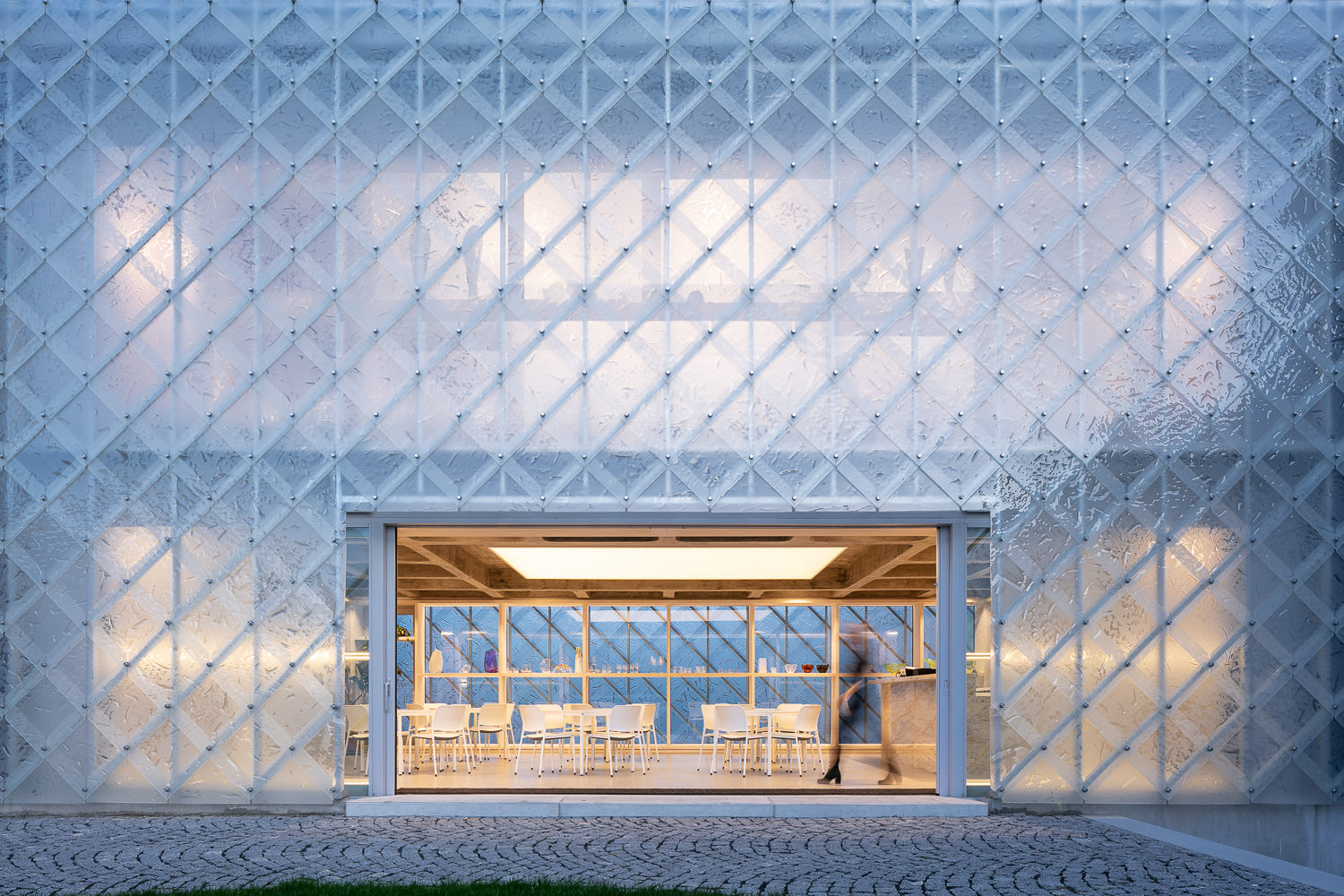 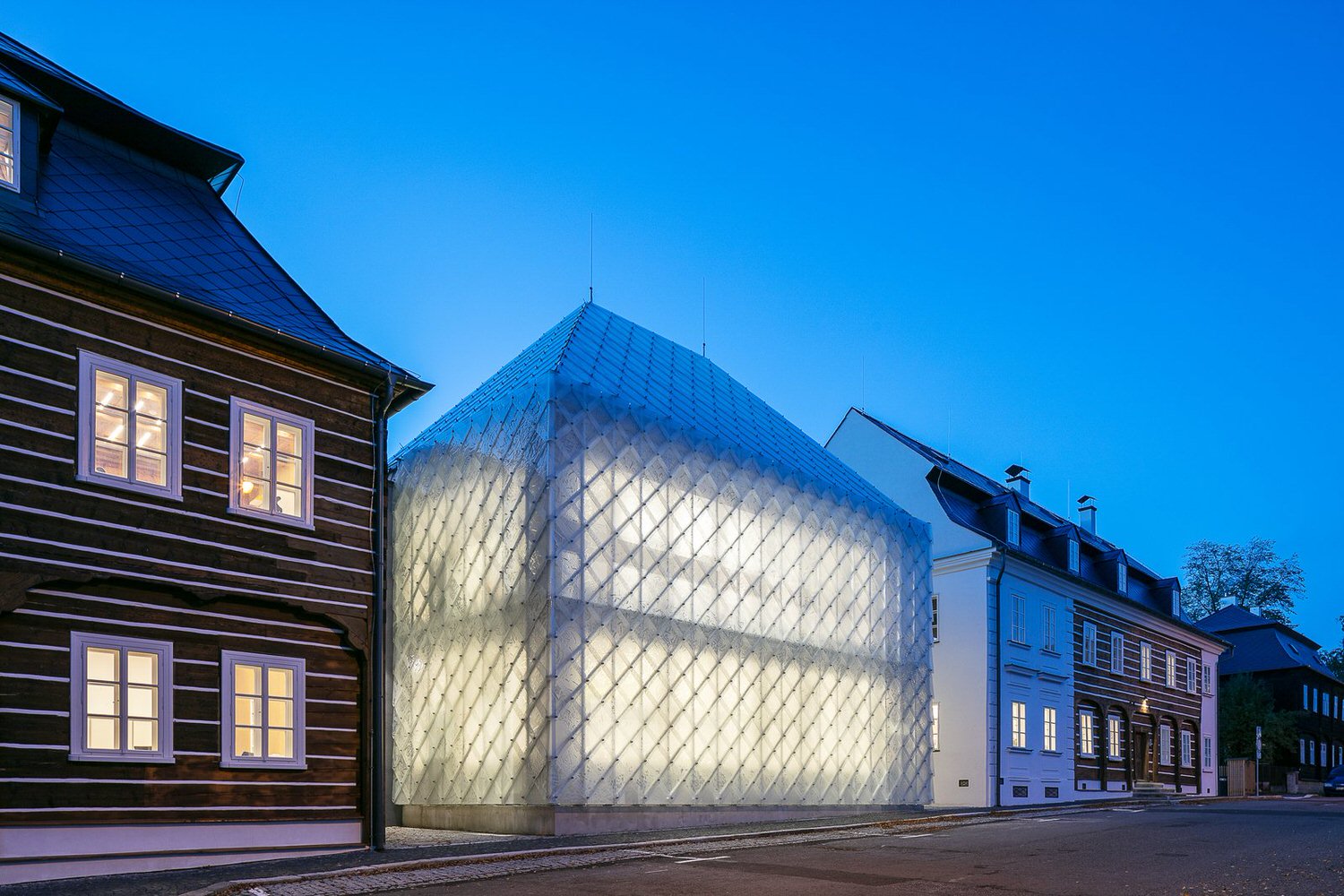 The glow-at-night- Glasshouse is the hero of Lasvit headquarters in the Czech town of Nový Bor, designed by OV-A.

Lasvit’s commitment to glassmaking is palpable and their striking headquarters in Nový Bor in is a testament to their dedication and passion. The project by is an absolute knockout, comprising several restored buildings. But the glasshouse clad in custom glass tiles is the major showstopper.

Inspired by the surrounding slate roofs, the façade is a tribute to the town’s glassmaking roots and Lasvit’s devotion to the medium. Over 1,400 custom glass tiles were used for the facade and a system has been devised whereby the tiles can be removed and reused on future projects.

“We chose a house used by glassmakers as long as two hundred years ago, and breathed new life into it — a life intertwined with glass and with the roots of this traditional craft in this area, showing how traditional materials can be transformed,” explains Jakimič.

Lasvit collections include contemporary creations in glass and crystal by renowned designers including , , and as well as a string of local Czech designers.

Let’s take a closer look at some of the exceptional ready-to-shine collections to hit our shores, available in Australia exclusively through . Shall we? 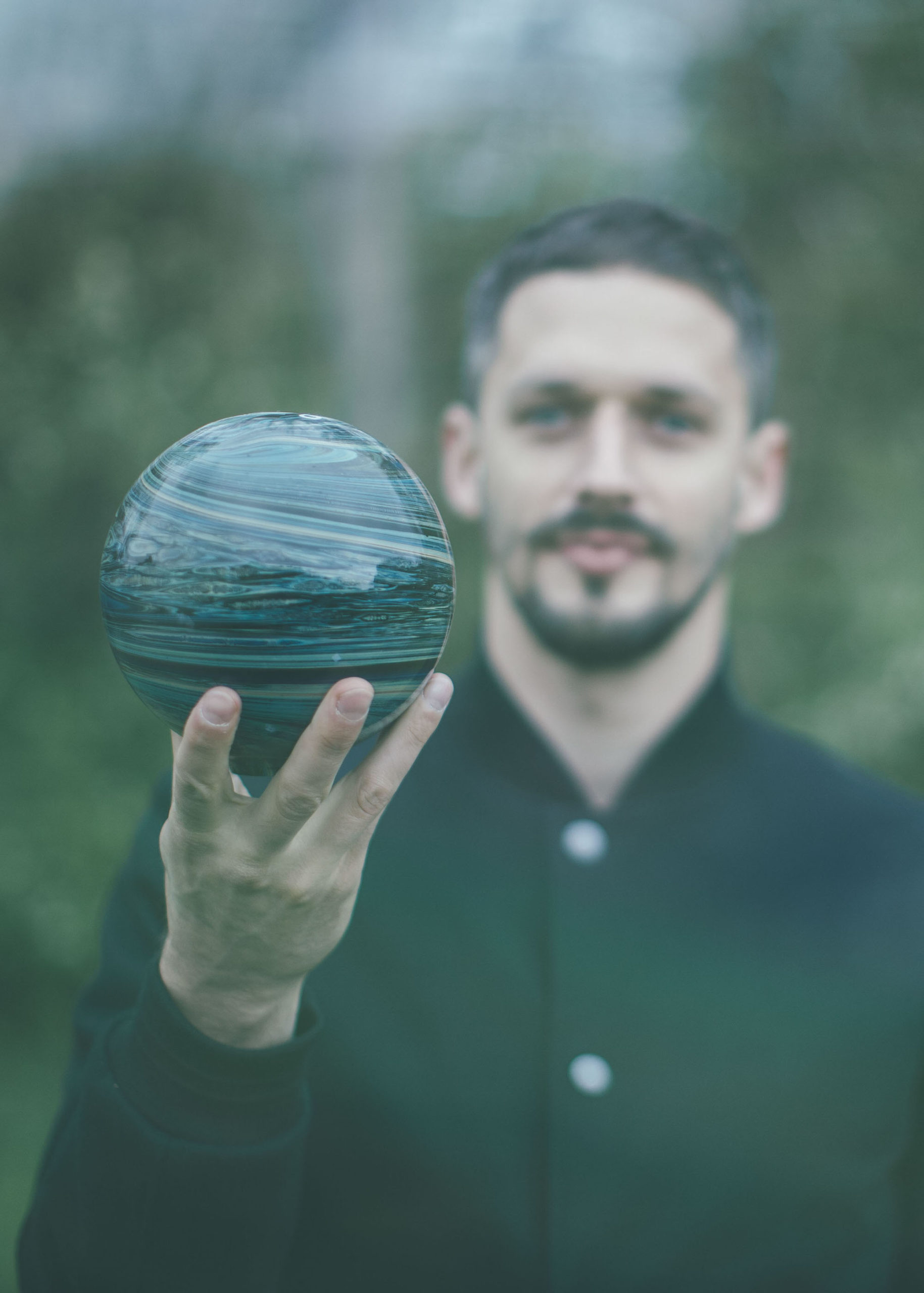 Lukáš Novák with one of the elements of his Spacey light designed for Lasvit. Spacey has two variations – Eclipse and Supermoon – named after the most distinctive sphere in the constellation. Eclipse refers to the dark night accent in the dark sphere, while the Supermoon accents the light one. 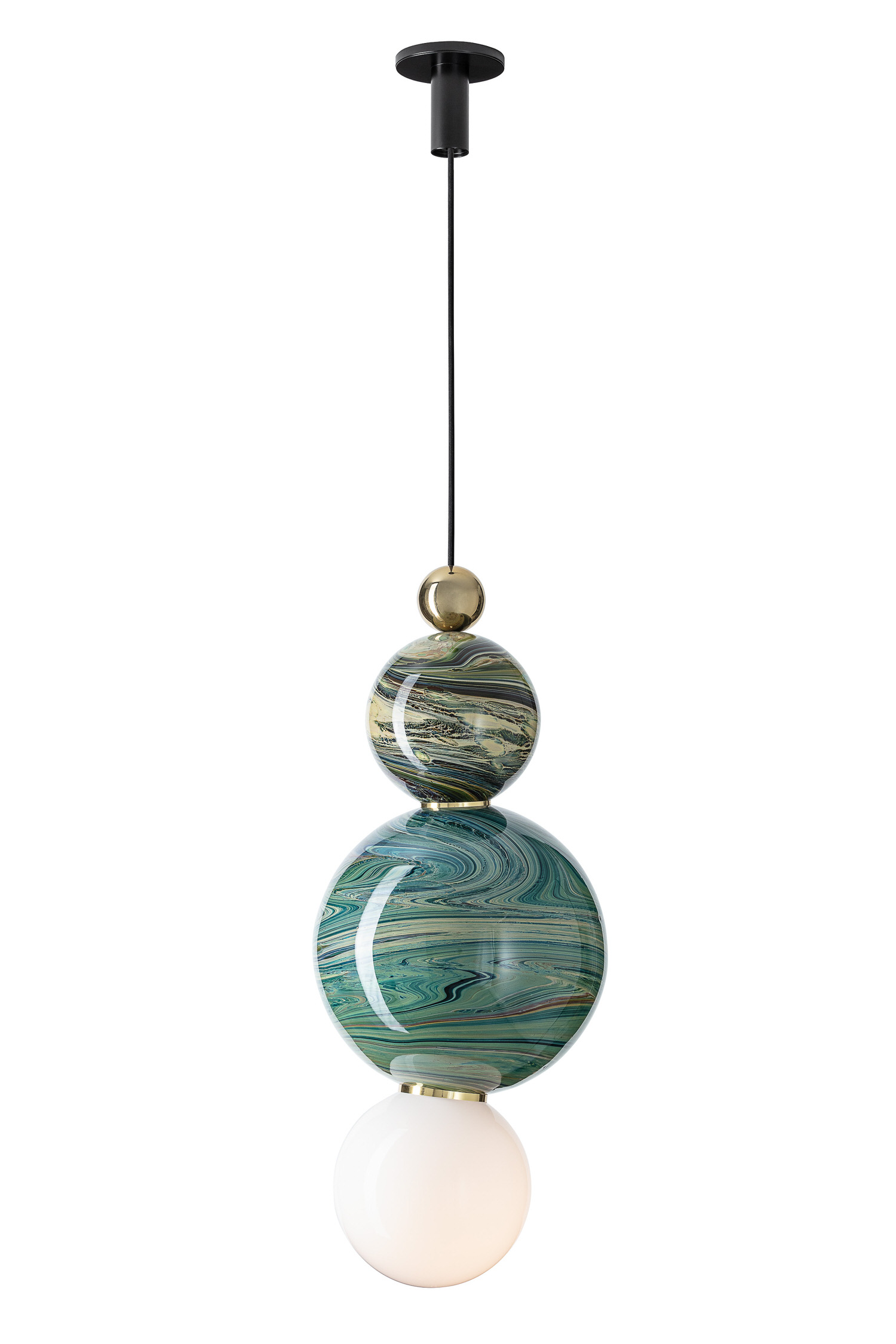 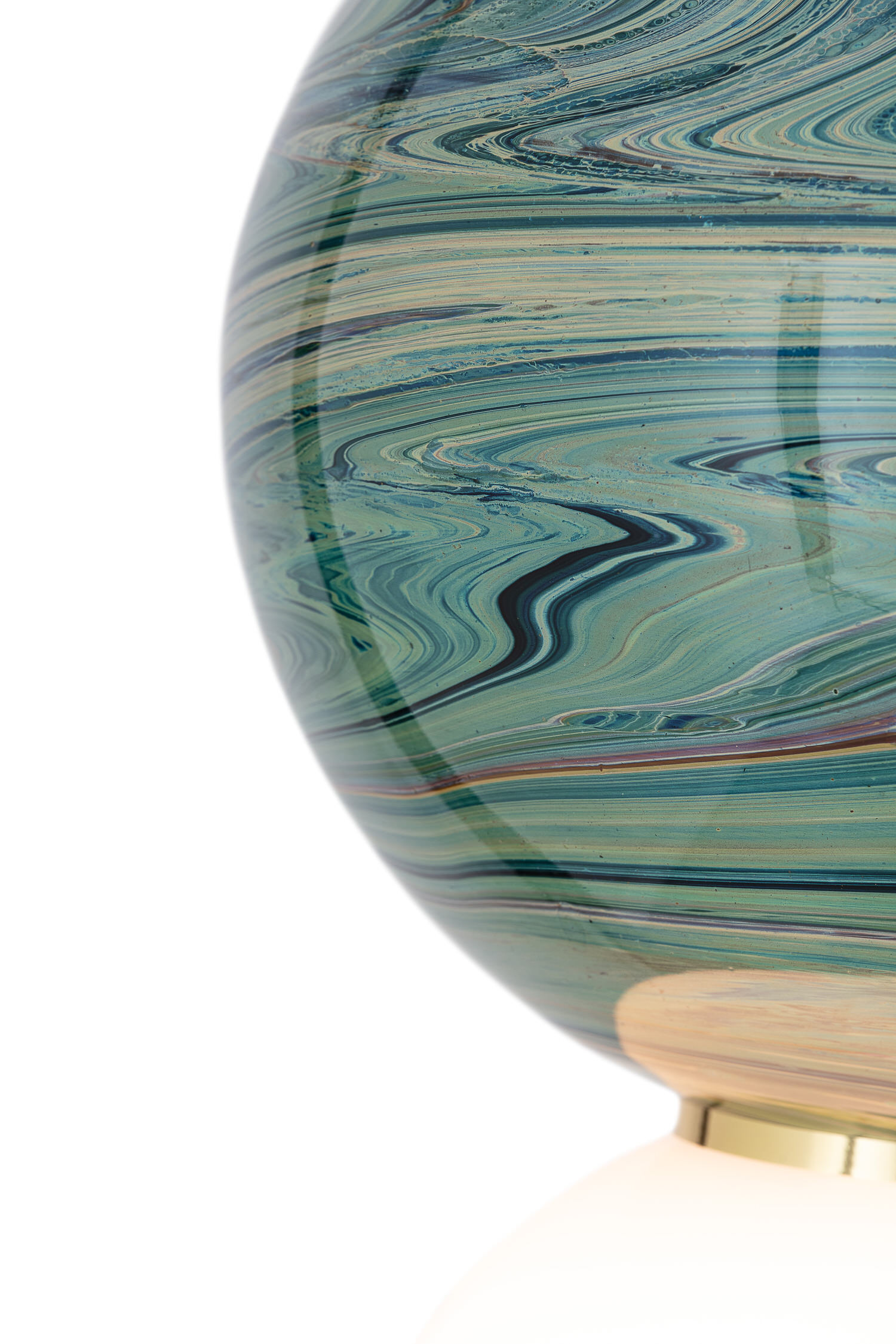 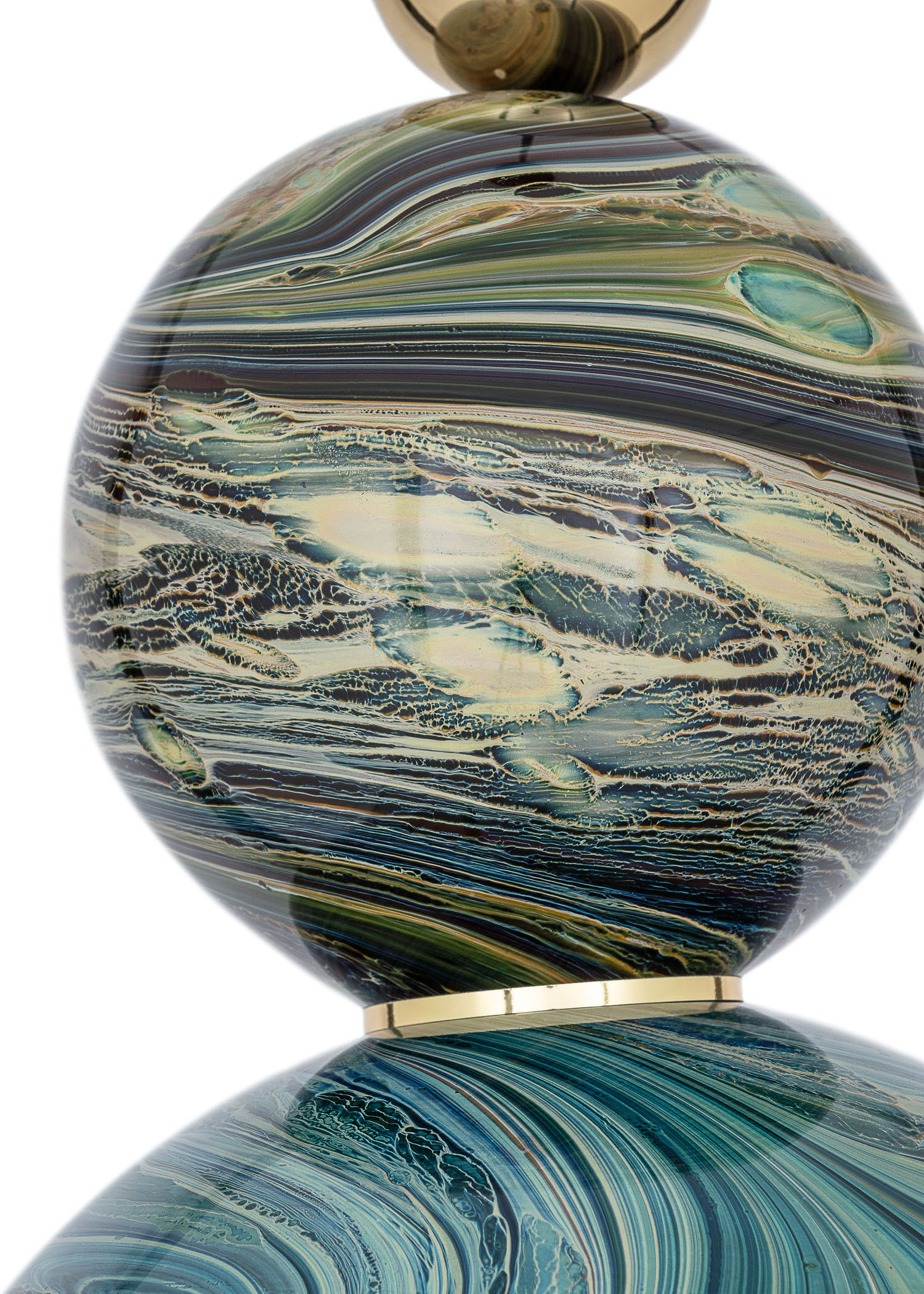 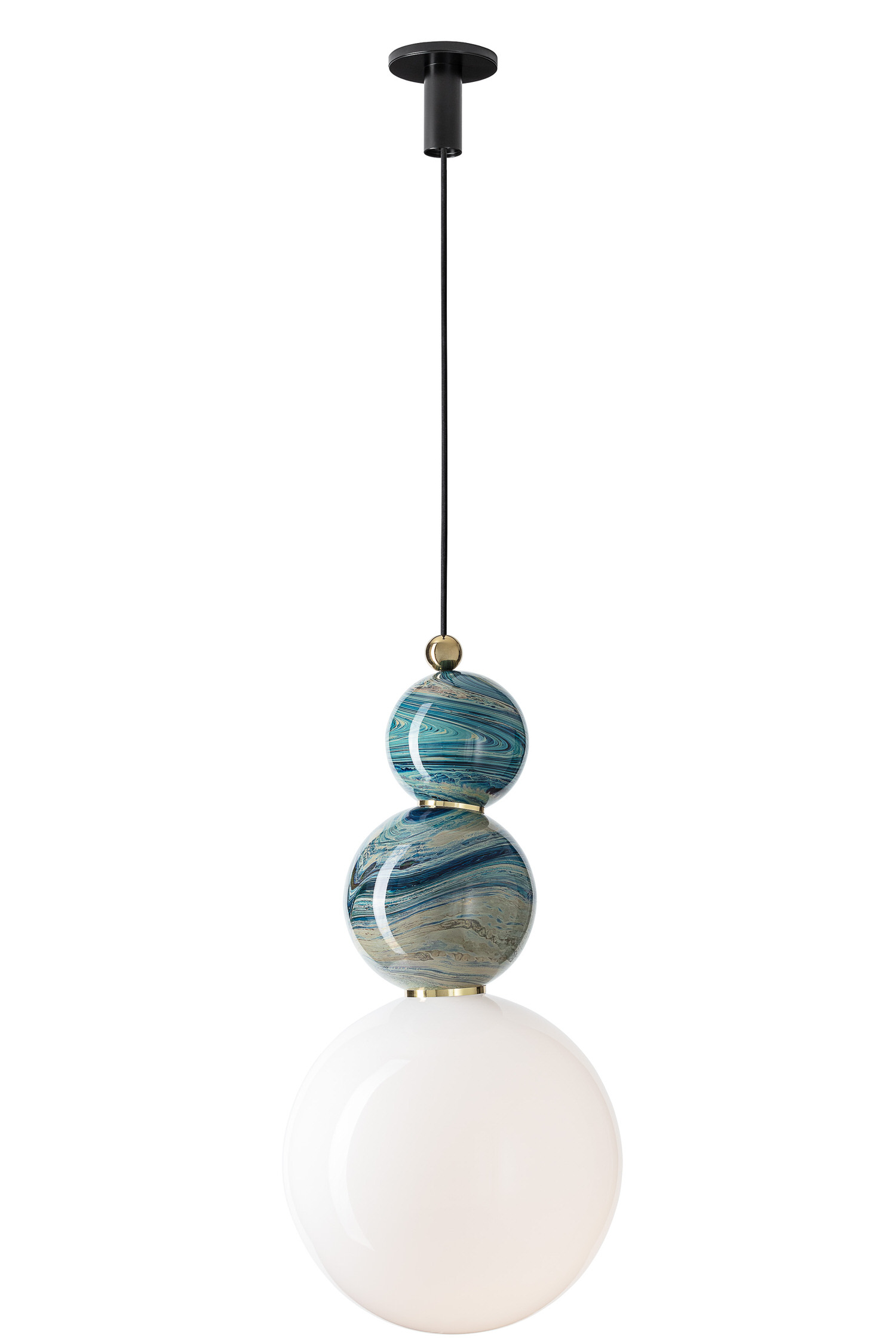 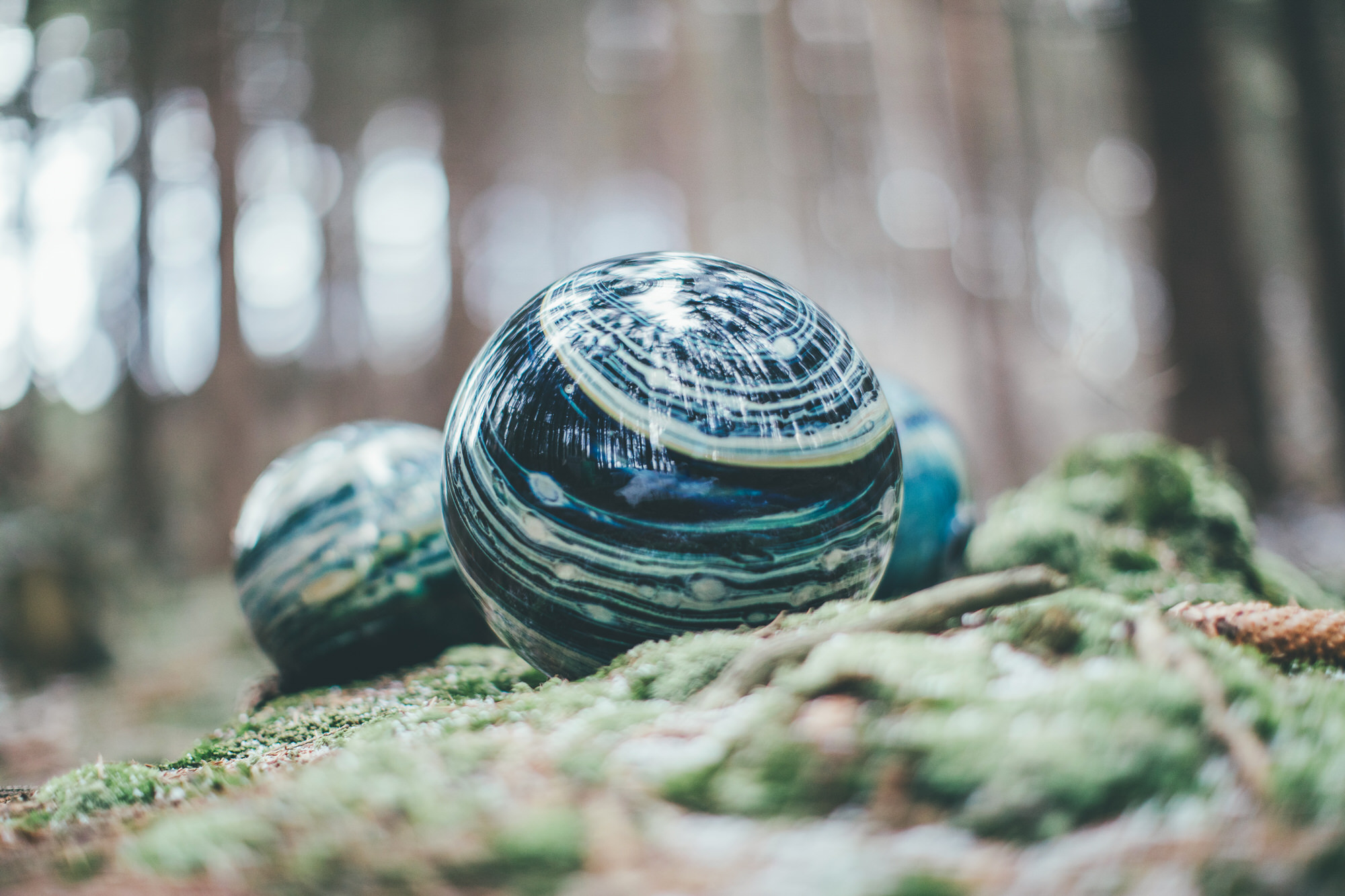 Czech designer Lukáš Novák discussed Spacey in the middle of a forest in Northern Bohemia. To capture the beauty of the universe, Novák picked the shape of a sphere and made use of an old technique called “lithyalin” – a technique popular in the 19th century. Pieces created by “lithyalin” look as if they were sculpted from gemstones. Throughout the centuries, the technique was almost forgotten until recently.

When we gaze into a telescope we want to discover and connect with the incredible beauty of the universe. We’re humbled and inspired by what we see, but the moment is fleeting and feels so out of reach. Spacey chandelier with its spherical, celestial forms brings the universe to us. Its gravitational pull is undeniable.

It was designed by Lukáš Novák who was born in the prominent glassmaking town of Nový Bor (where Lasvit is also located). He blew his first glass bubble at the age of four, but admits that he tried to resist glass for a very long time. In the end, he fell in love with it and he now sees glassmaking as a way of expressing emotions and stories through forms and composition.

Novák chose a sphere to capture the elemental beauty of the universe and used a technique called lithyalin to create a swirled, gemstone-like appearance. The technique has been around for centuries but was resurrected in Nový Bor 200 years ago. Pieces made by lithyalin look as though they have a marbled surface interwoven with veins of contrasting hues.

Spacey has two astrological variations: Eclipse and Supermoon. Both are an intricate balance of four spheres, but Eclipse has an accent in the dark sphere, while Supermoon accents the light one.

With Spacey, we are more than just spectators looking through the eyepiece of a telescope, we can bring a piece of the universe into our homes, offices, hotels and public spaces.

Press Iced pendant designed by Nendo for Lasvit has a crackled glass texture created through three rounds of heating. Look closely and you might be fooled into thinking the glass has been shattered into a million tiny pieces. 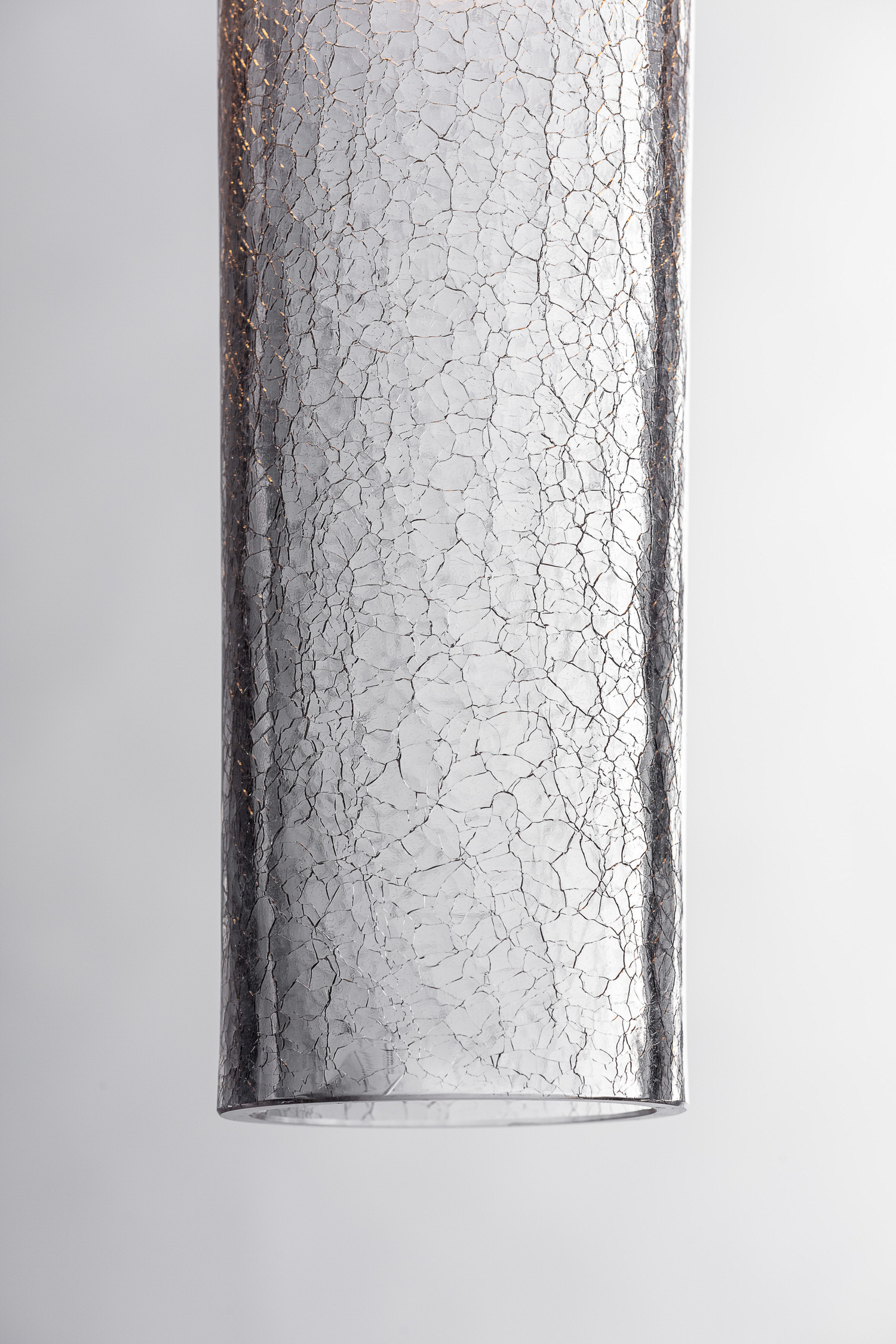 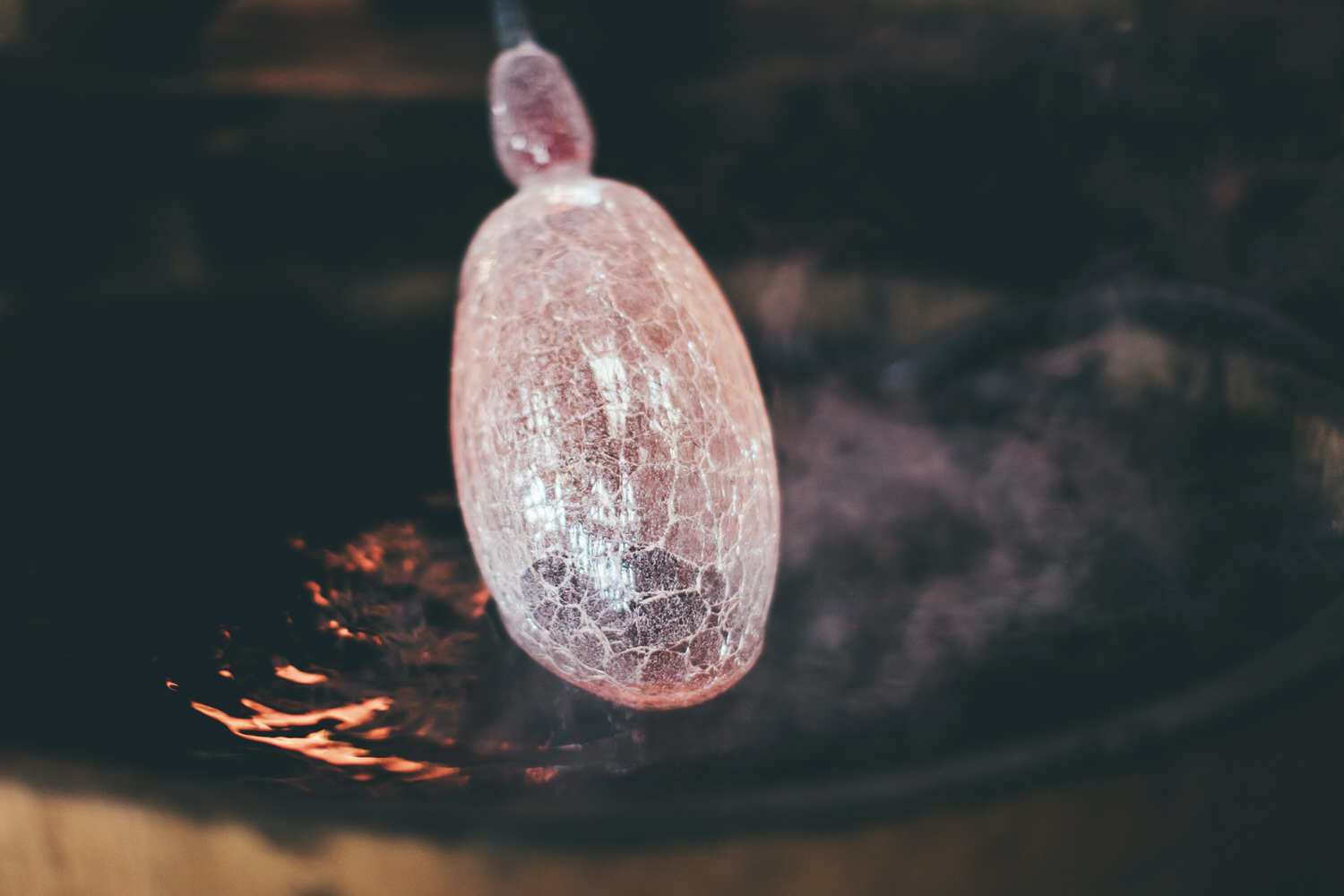 Lasvit is renowned for their collaborations with international artists, architects and designers to create breathtaking works of glass. Glass that not only reflects the history of Bohemian glass making but is also at the forefront of multidisciplinary design.

Press Iced is a partnership with Japanese design studio who have upgraded the design of their Press Lamp with a completely new crackled finish. Look closely and you might be fooled into thinking the glass has been shattered into a million tiny pieces.

This lamp has universal appeal with its simple yet original design. In fact, Nendo pursued simplicity over extravagance, aiming to highlight the practical beauty of everyday craftwork. The light comprises a glass tube pressed together as if pinched around the top of a light source to hold it in place. The collection was first launched in 2012, and is now available in a floor lamp and pendant lamp.

In the latest “iced” version, the surface of the glass has a crackled texture created through three rounds of heating. With each round, the hand-blown piece is rolled in wet sawdust, then heated in the furnace and finally cooled in a bucket of water. The moisture creates tension on the surface making the glass crack and the heat seals it to make the piece whole again. To minimise waste, the product is made of sustainable materials and uses workshop wood offcuts for the sawdust used in the process.

Crackle is one of the oldest glassmaking techniques that helped hide flaws, faults and bubbles. But with this new collection, it’s been transformed into something intentional, artistic and noble. 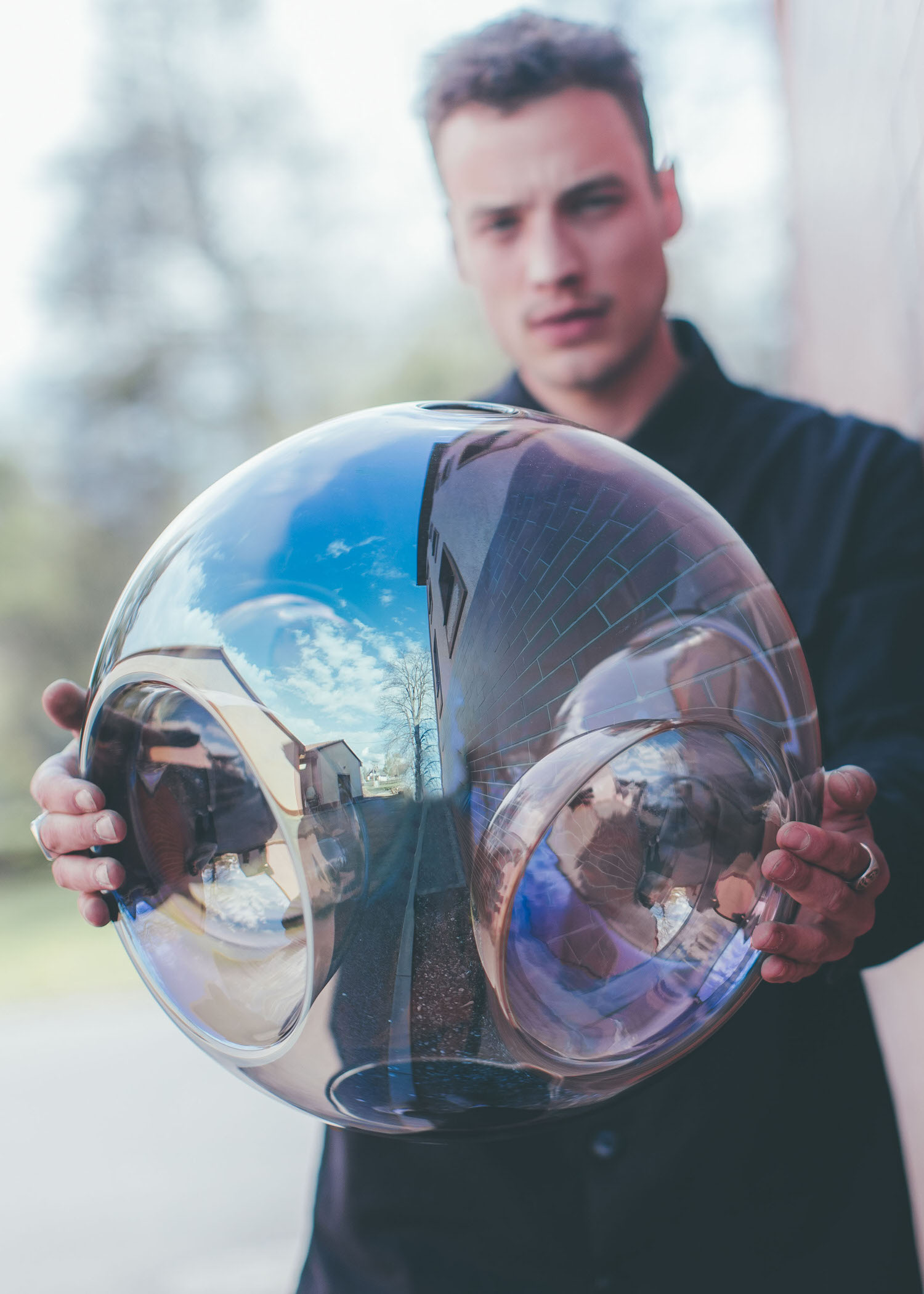 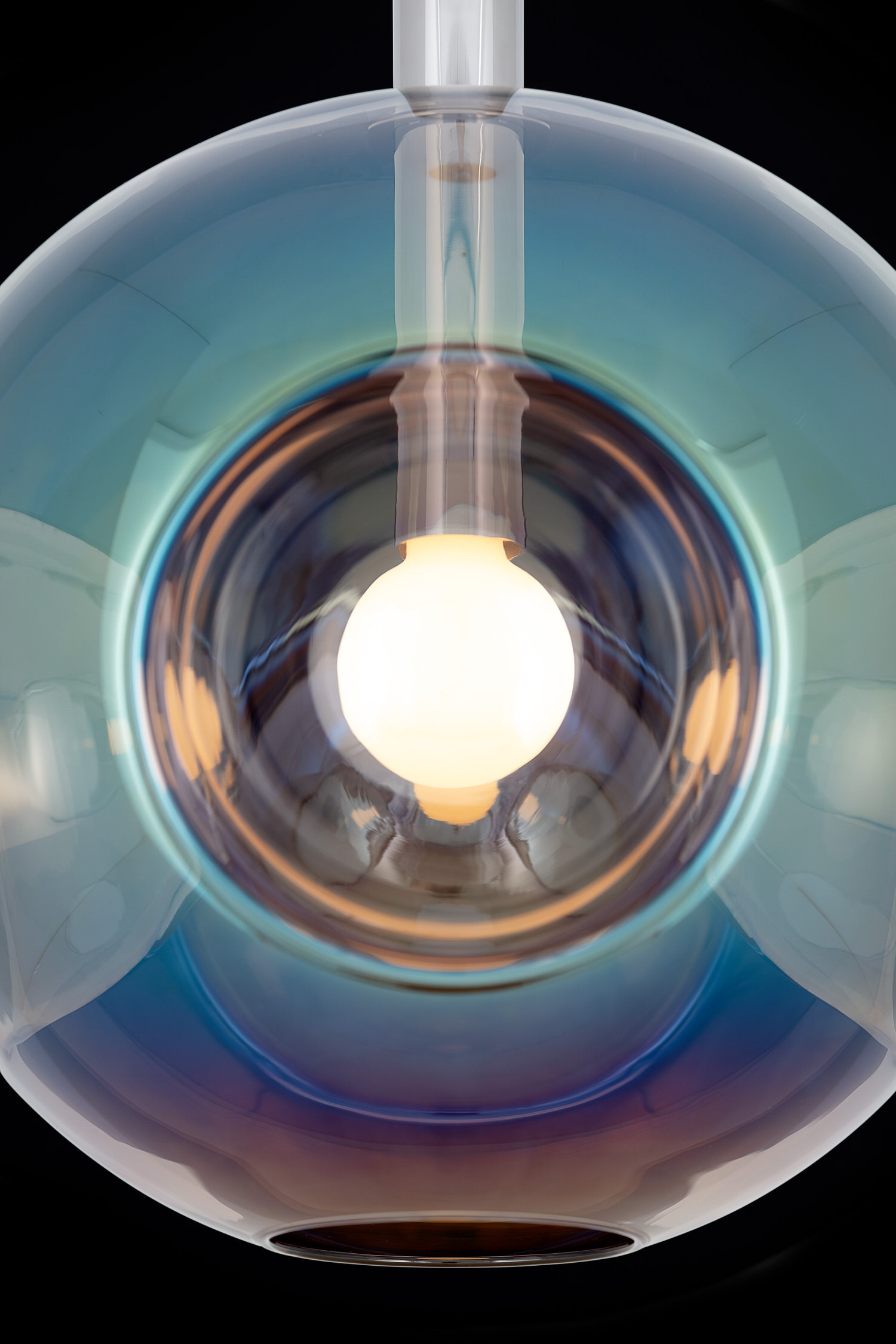 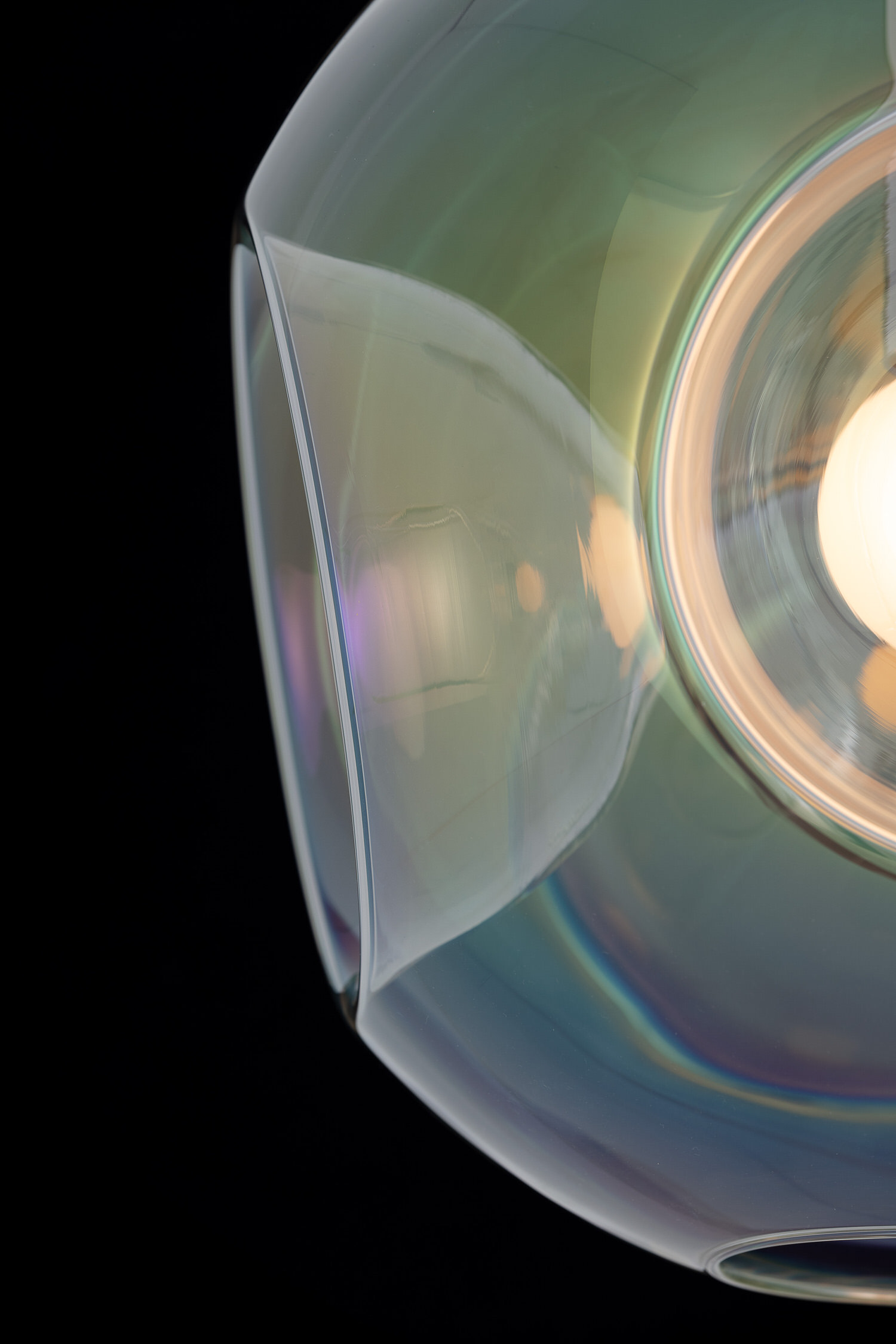 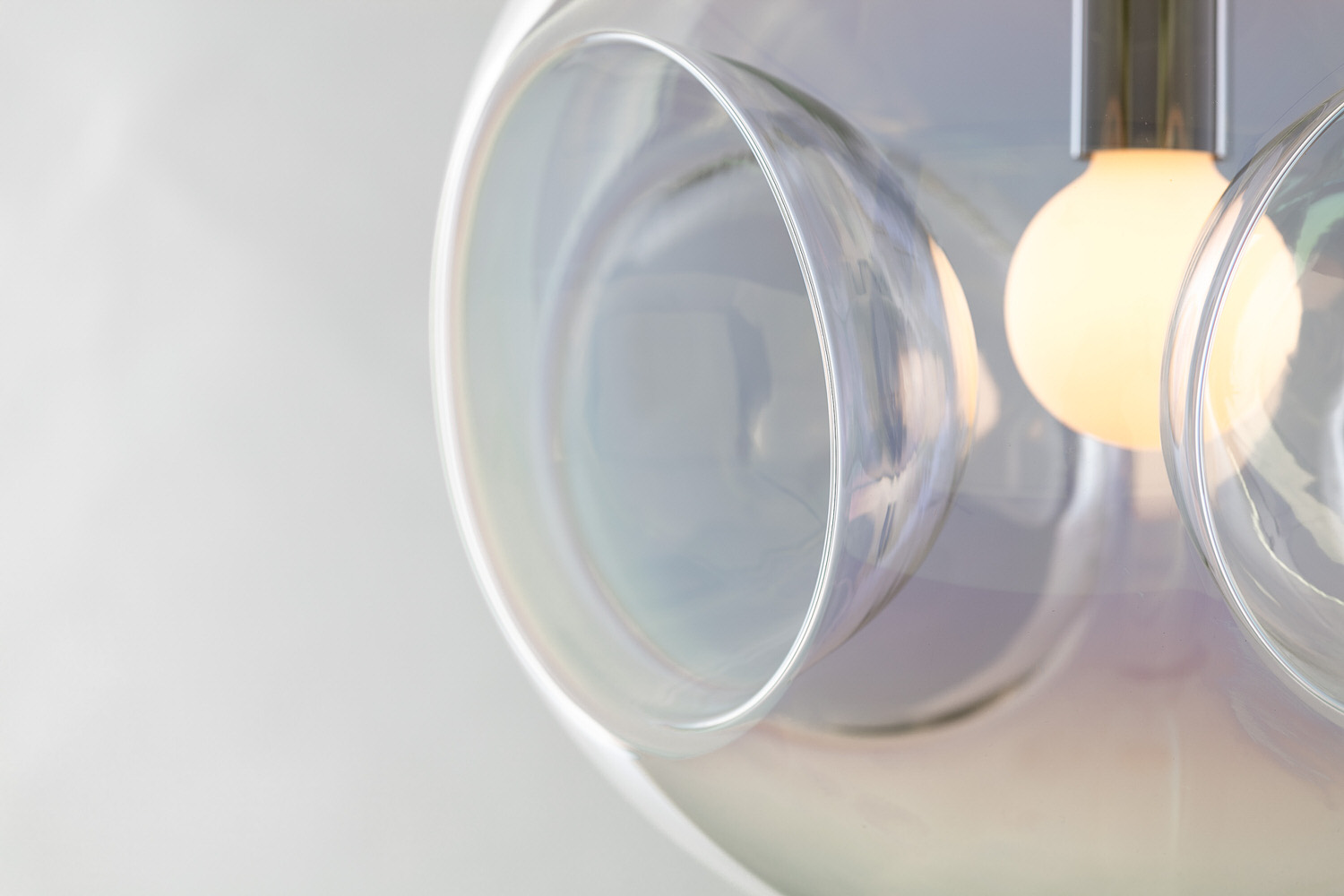 Prague’s coloured metro tiles are so iconic they serve as a reference for the Globe Metro collection by Czech furniture and interior designer Cyril Dunděra. The hand-blown Bohemian crystal glass chandelier is made up of a series of concave indentations, much like the ones that form the rows of aluminium tiles designed by Czech architect Jaroslav Otrubato in the 1970s to distinguish the stops of Prague’s underground train system.

“These specific tiles are something that most of us see every day in the familiar environment of the metro stations. They symbolize a part of Prague’s urban architecture and are, most importantly, a beautiful piece of design,” says Dunděra. “I wanted to emphasize the smooth form within these tiles so that others can get a feel for its beauty too.”

The light source itself is Art Deco in style, reflecting interesting patterns through the indented glass surround. The entire pendant is elegantly suspended from the ceiling by a modest wire.

Although the 400mm-diameter ball is made of borosilicate glass, it is also metal-coated and comes in two different iridescent finishes – rainbow blue and iris. According to the designer, The best light pattern appears when you look right into the centre of the extruded hemisphere. “Then you will see a perfect ring of light,” adds Dunděra.

Globe Metro was designed to fit into any interior and will make an impact with its unique shape and colour. It would be perfect for intimate or large spaces as a stand-alone piece or as part of a clustered set.

Cipher collection by Yabu Pushelberg for Lasvit is reminiscent of intricate, foreign objects from outer space. 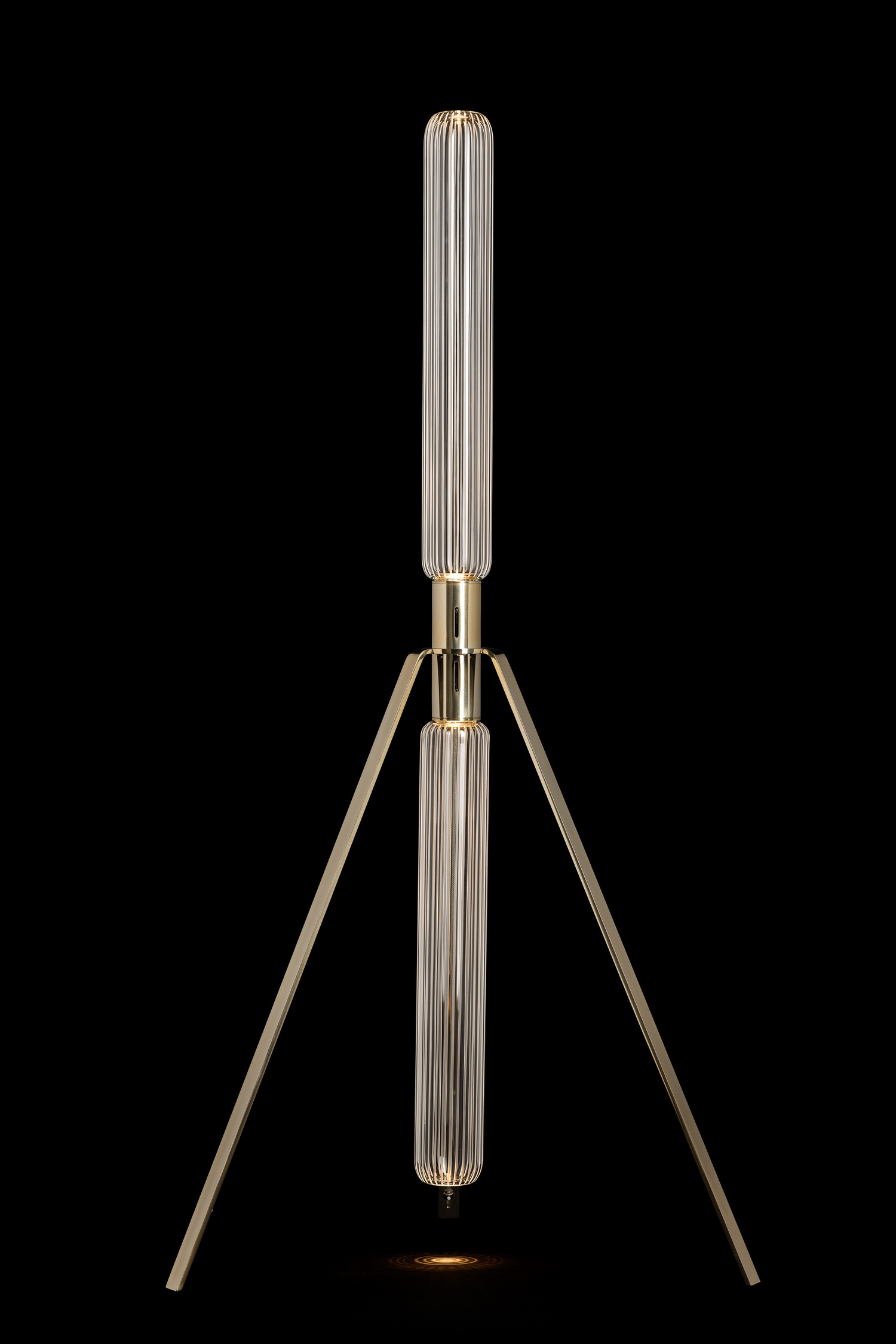 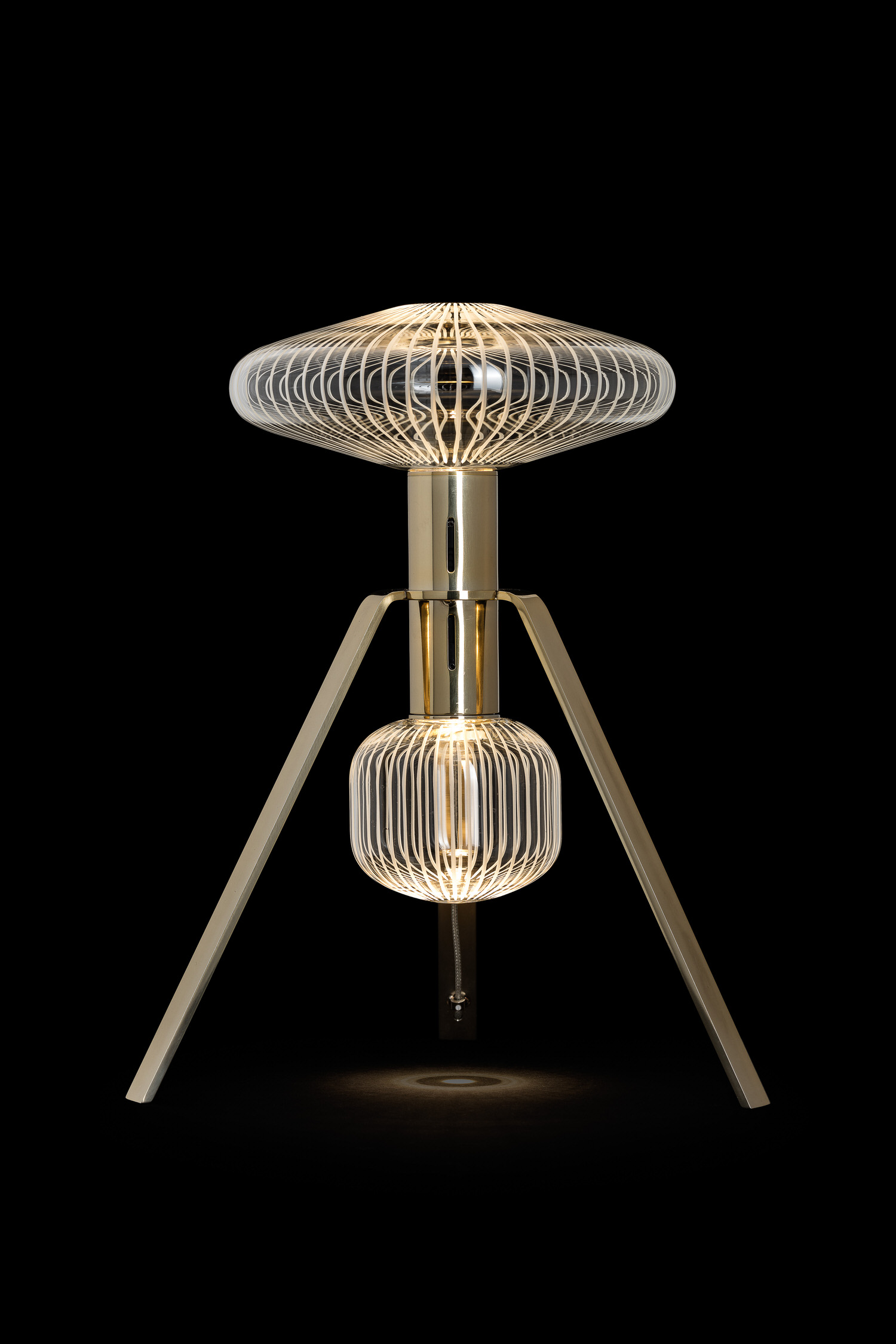 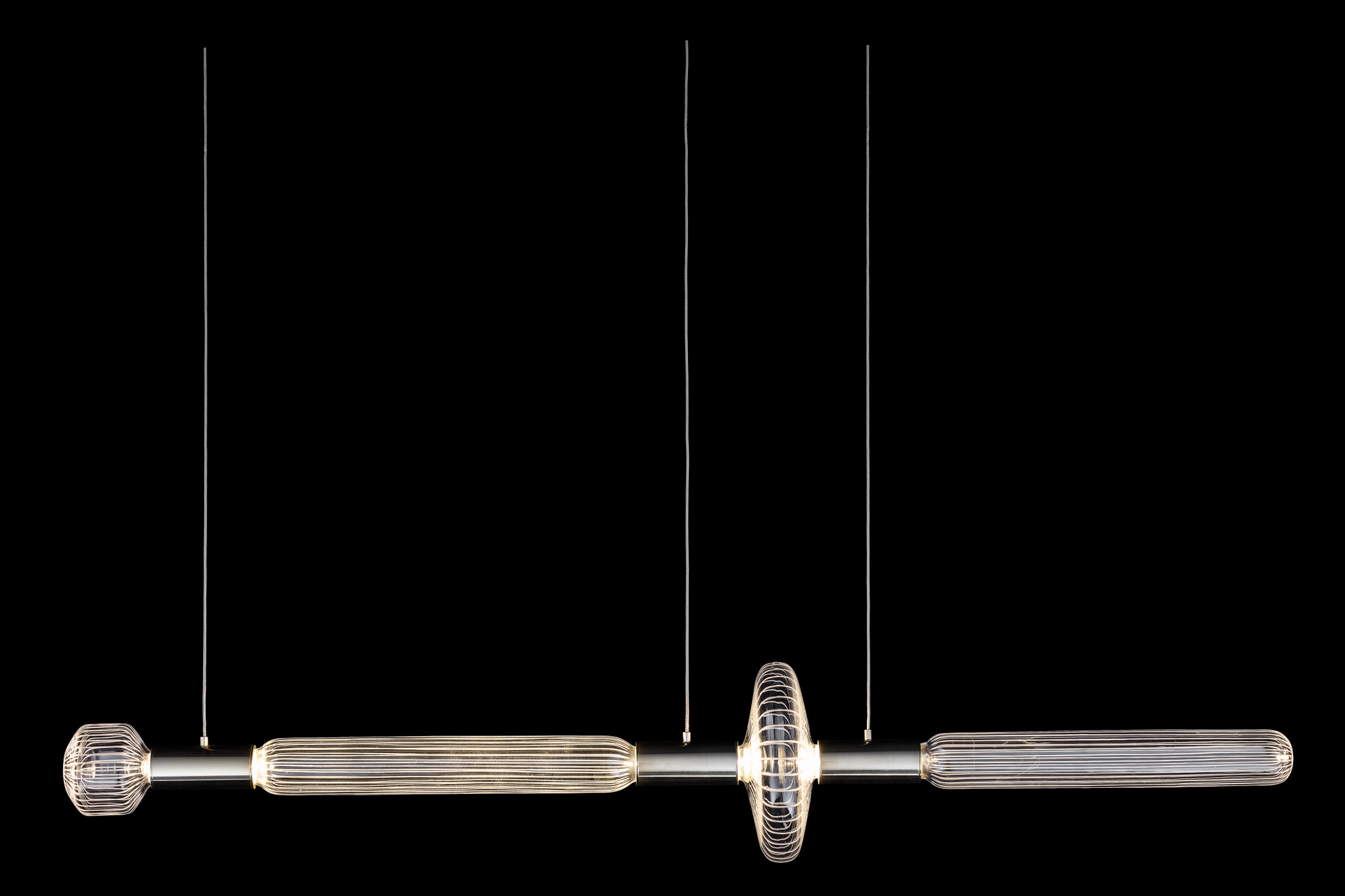 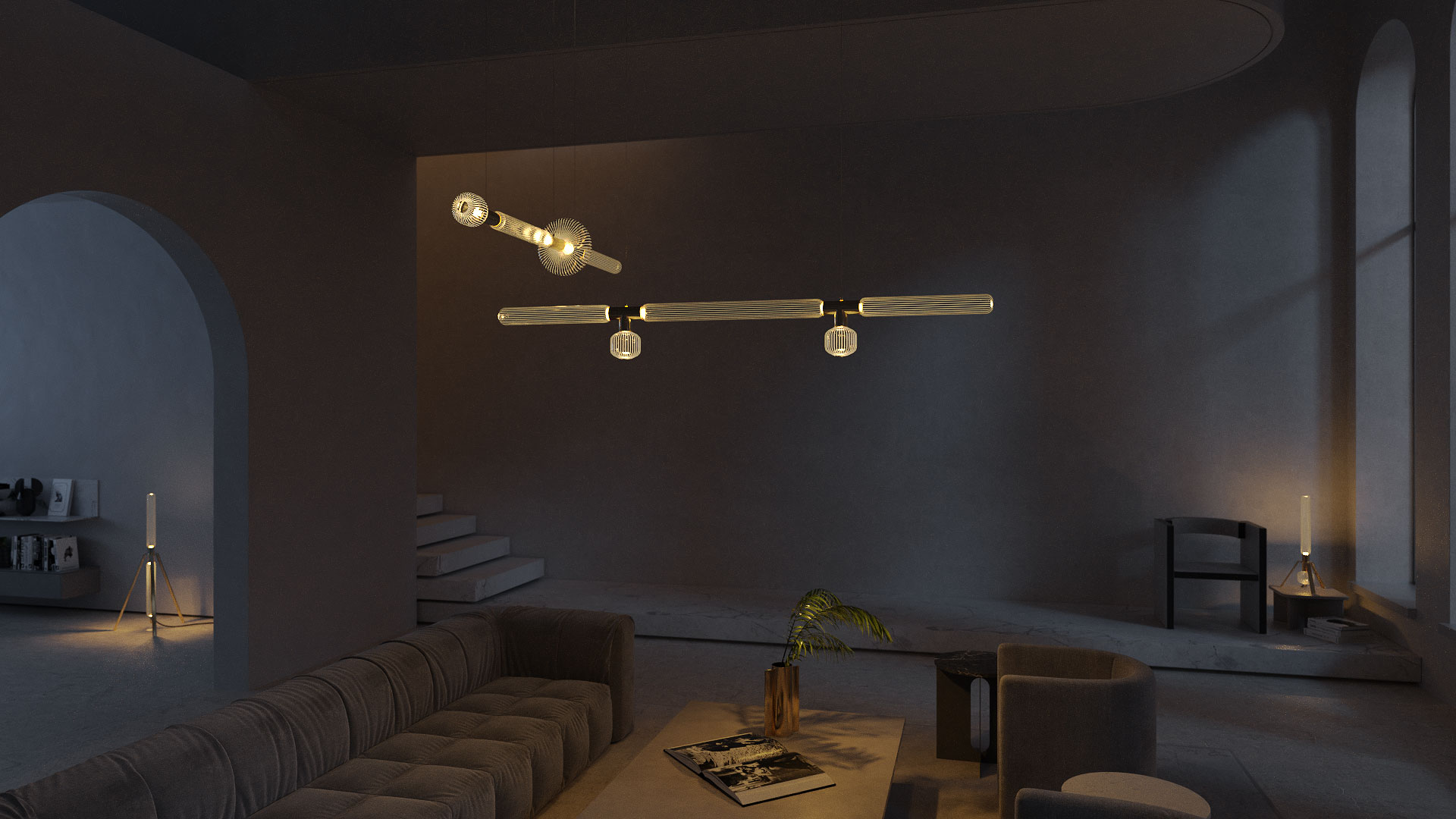 Cipher is a collection of crystal lighting that is reminiscent of intricate, foreign objects from outer space. The table lamp stands tall like a spacecraft or capsule, while the pendants are like roving satellites or bursting cosmic shapes.

, one of the most recognized design firms in the world who are perhaps best known for their , teamed up with Lasvit once again to create the collection which contrasts heritage techniques and contemporary form. Its delicate hand-blown crystal cylindrical pieces are cut with clean, clear lines. “The surface decoration was influenced by our fascination and exploration of the way in which etched patterning catches the light,” the designers explained.

Light emanates from the polished champagne-gold connection points and light sources are cleverly hidden inside these joints. The radiant quality is soft and dispersed but the lights also cast the most extraordinary star-shaped shadows across the room.

“We wanted to celebrate the inherent beauty of cut crystal and the versatility of textures. We looked for ways to create different qualities of light. The form began as an extruded hexagon, but its edges were ultimately softened and smoothed to create cylindrical forms,” said the design studio.

With endless configurations, the Cipher collection is exceptionally flexible and customizable. It is perfect for considered private residences, hotels and bespoke installations projects.