Lab-Inspired Office for a High-Tech Gas Company in Taoyuan, Taiwan by Waterfrom Design. 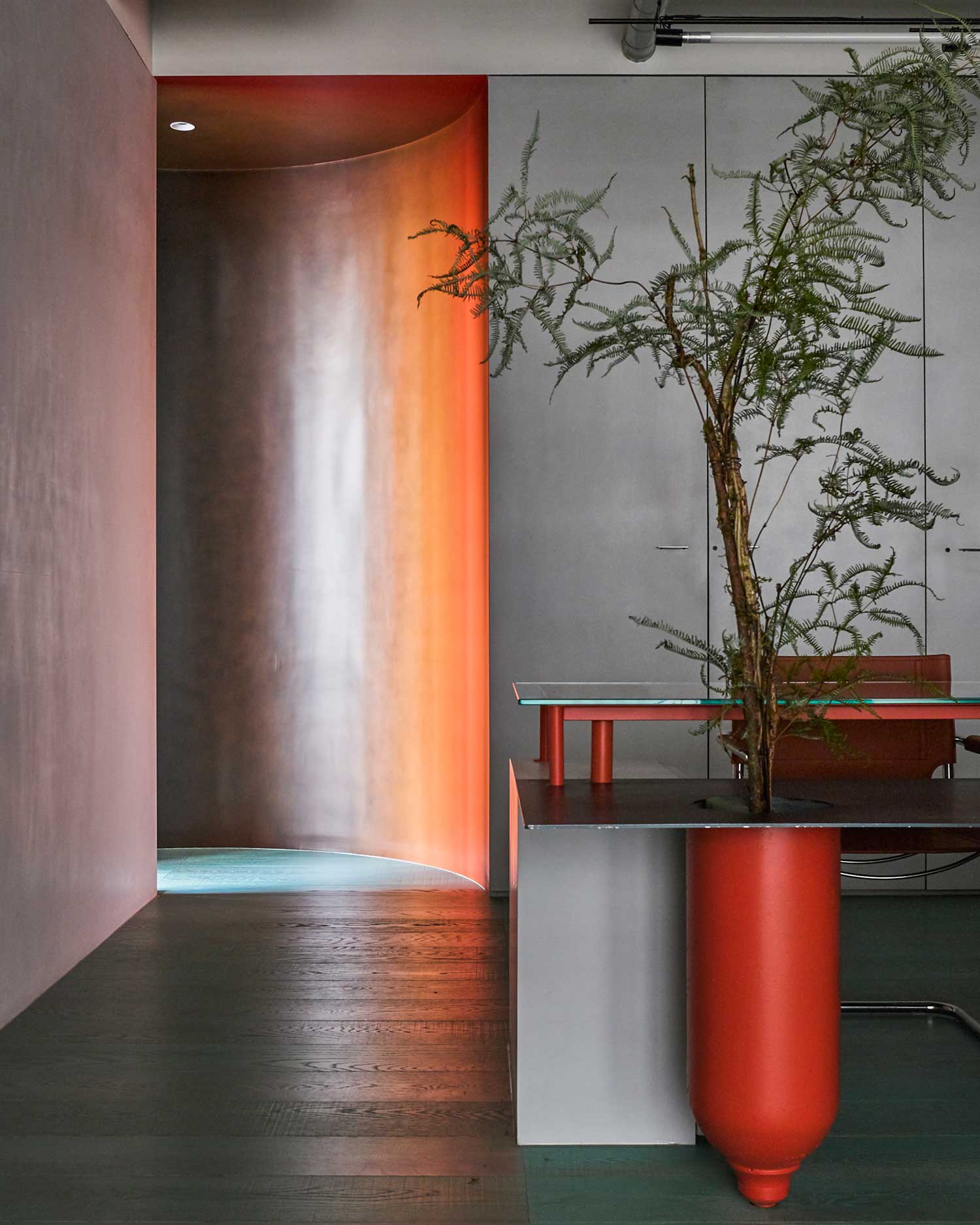 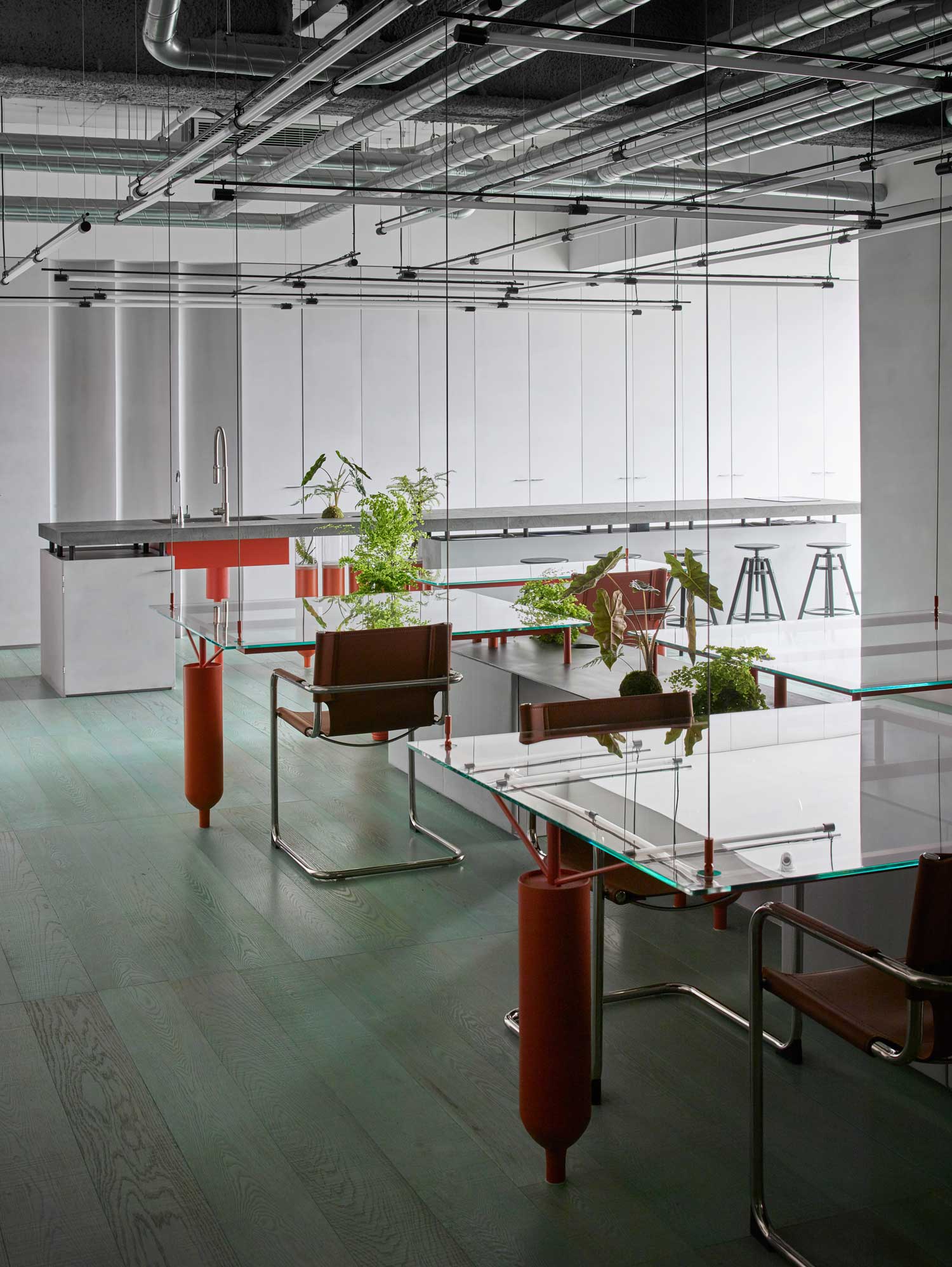 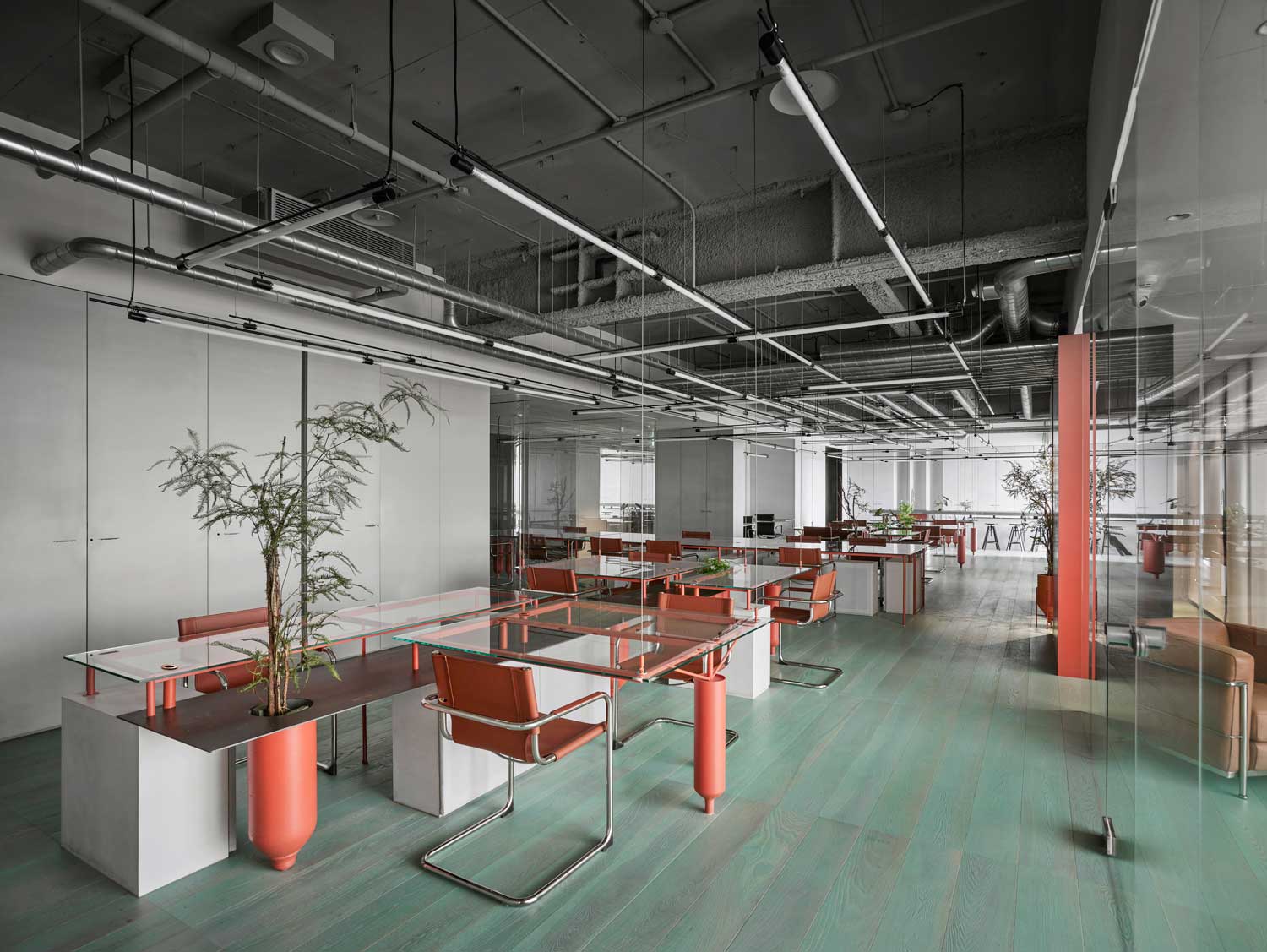 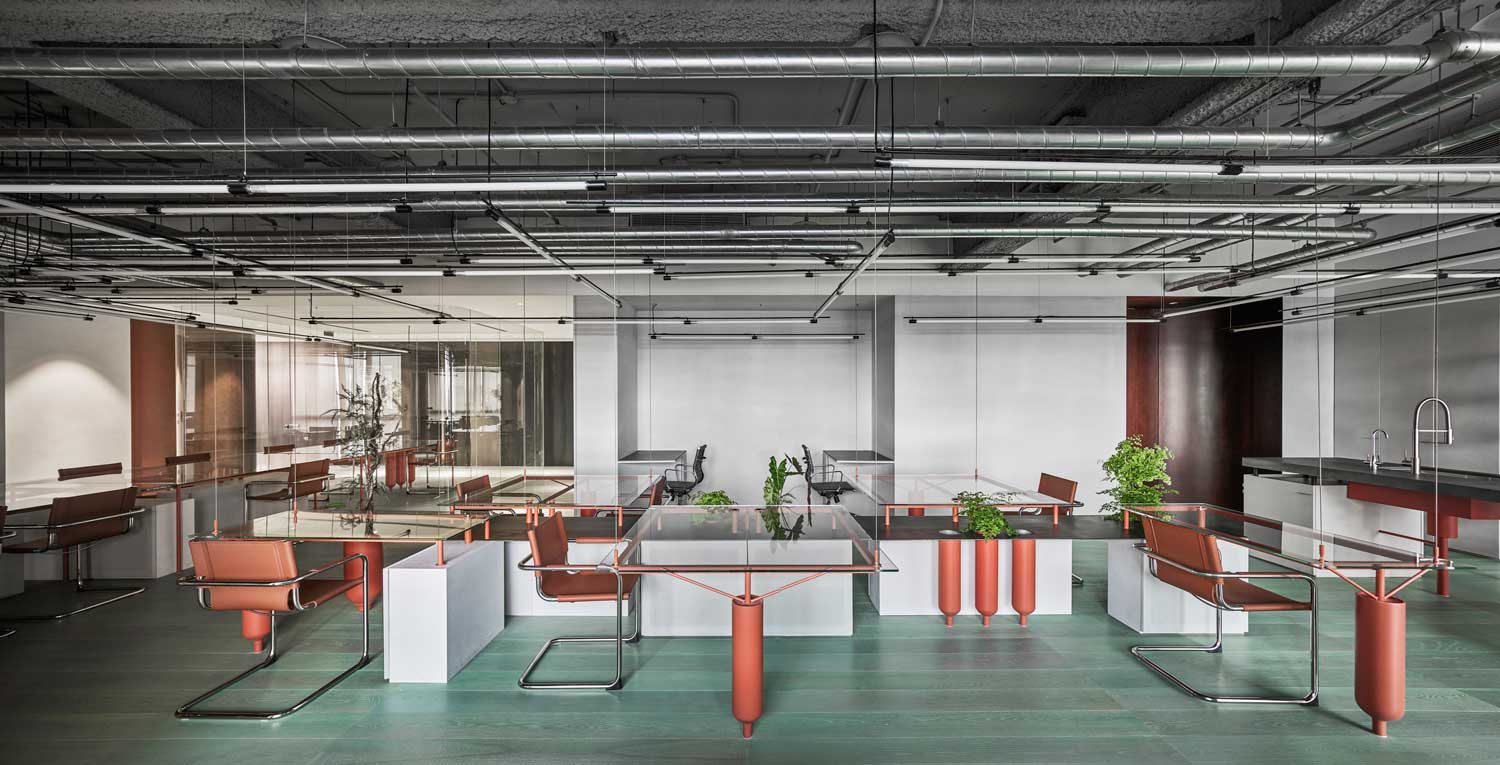 wanted to reinforce the idea of science rather than of traditional workplace when conceptualising the Gas Lab office in Taoyuan, , the brand-new headquarters of Jing He Science, a technology company which sells high-tech gas. And that they have surely achieved. By using the idea of a laboratory and its association with science-like products – thinks test tubes, cast & black iron, gas pipes and unique steel cylinders which carry technological gas – they have applied common science materials transforming the stereotypical image of an office.

Waterfrom collected recycled steel cylinders of different sizes applying steel plate glass and steel components, turning them into legs of desks, a counter of a bar, and running a pipe under a long 25-people conference table. The ergonomically-designed deks break through traditional office circulation and separate blocks of the floor plan.

The steel cylinders are ubiquitous throughout the , and via their application, the designers hoped to highlight the invisibility of gas. In some ways, this office is not just an ode to science but is reminiscent of installation art. “In the office after the transformation of function visually highlight the invisible gas. Thus, the invisible gas becomes a specific corporate identity. By design, we create the decorative role and extend the years of utility,” said the designers. 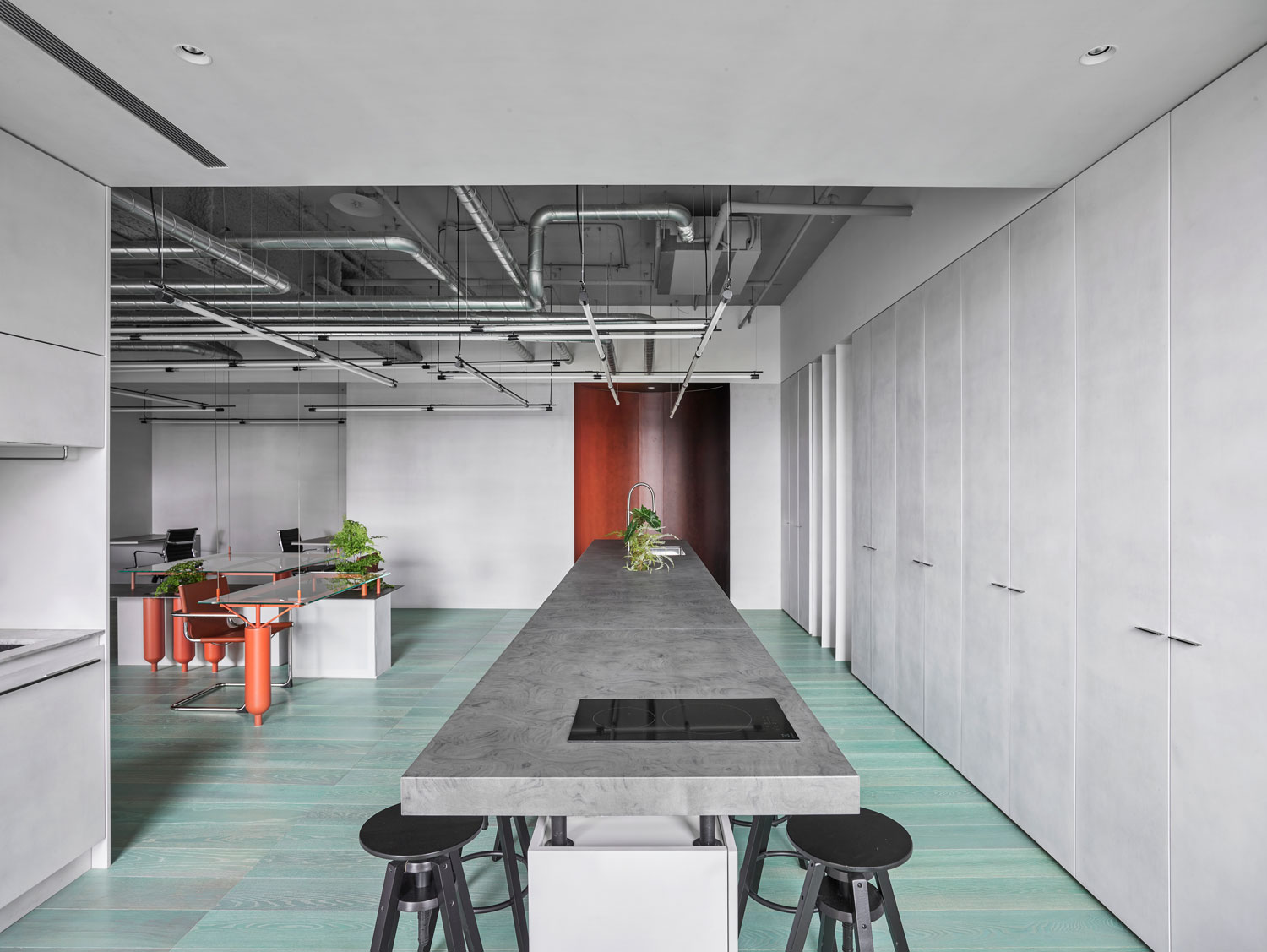 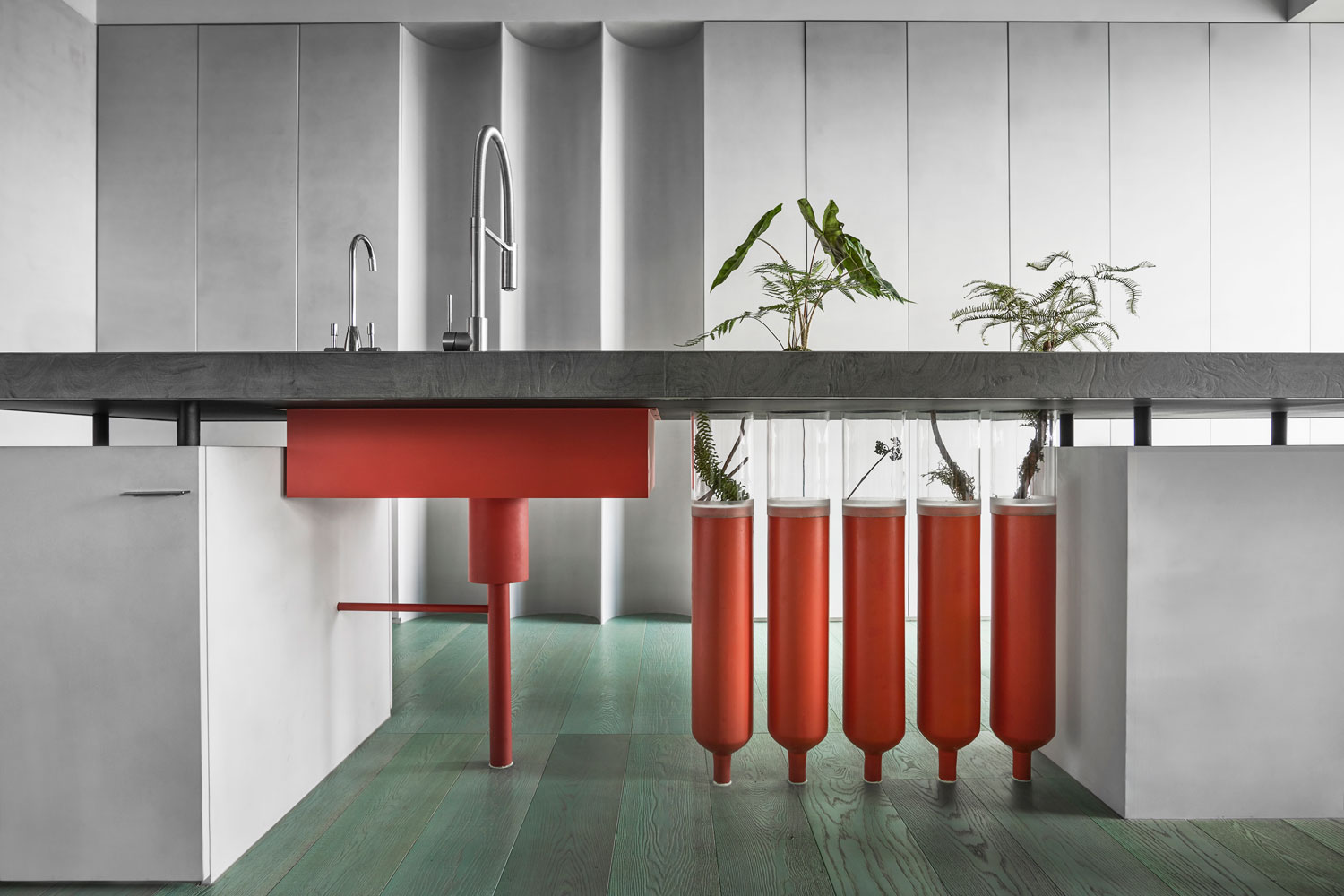 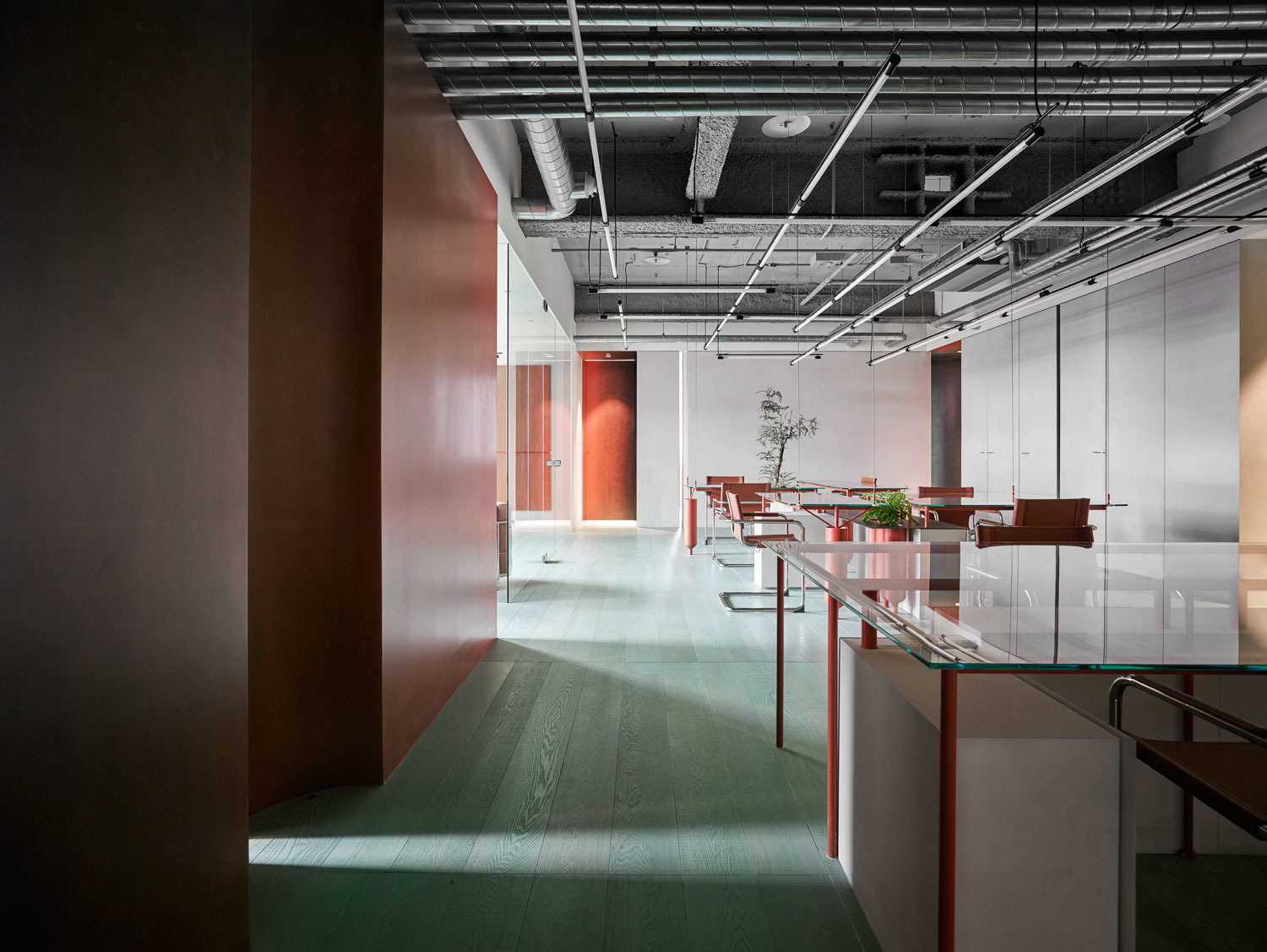 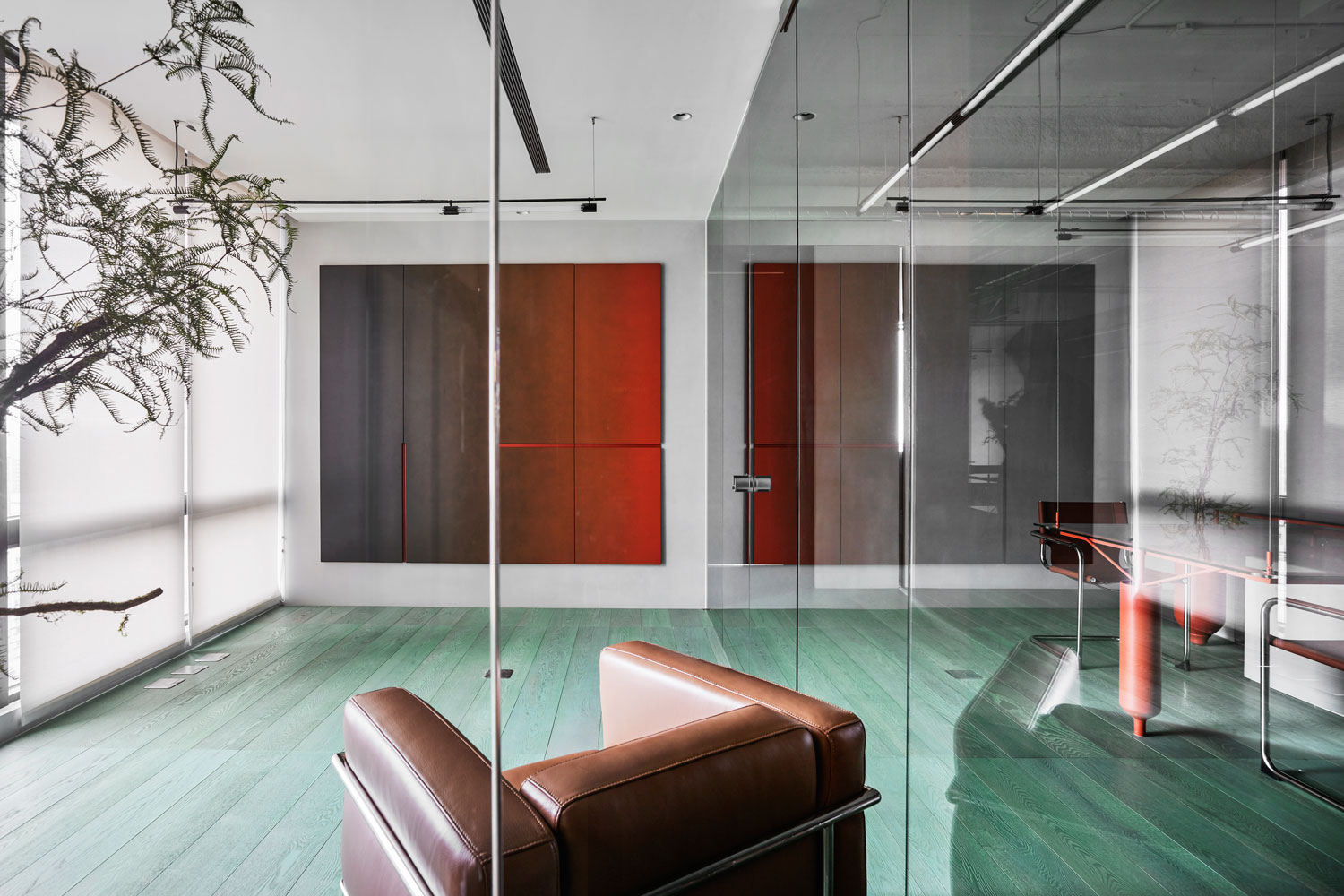 Deconstructing the design and intentionally cutting and magnifying the scale of the steel cylinders, they have reorganised the lines to create interior semicircles of different diameters which are randomly placed on the curved wall of the entrance, the back wall of the kitchen island, or have to form a protective screen around the manager’s office.

Colour was an important component of the design. Orange, the common colour on lab buttons and important devices in factories is used throughout. The application of colour on the steel cylinders, baked at different temperatures to achieve shades from bright to dark, orange to black, represents the existence of gas at different temperatures.“In users’ work experiences, colour is associated with science in the office similar to the laboratory. Gradient colors resemble the cloud-like gas and flowing liquid which cannot be easily grasped. It develops ambiguous visual movement and temporality in the mechanical severe environment,” said the designers. 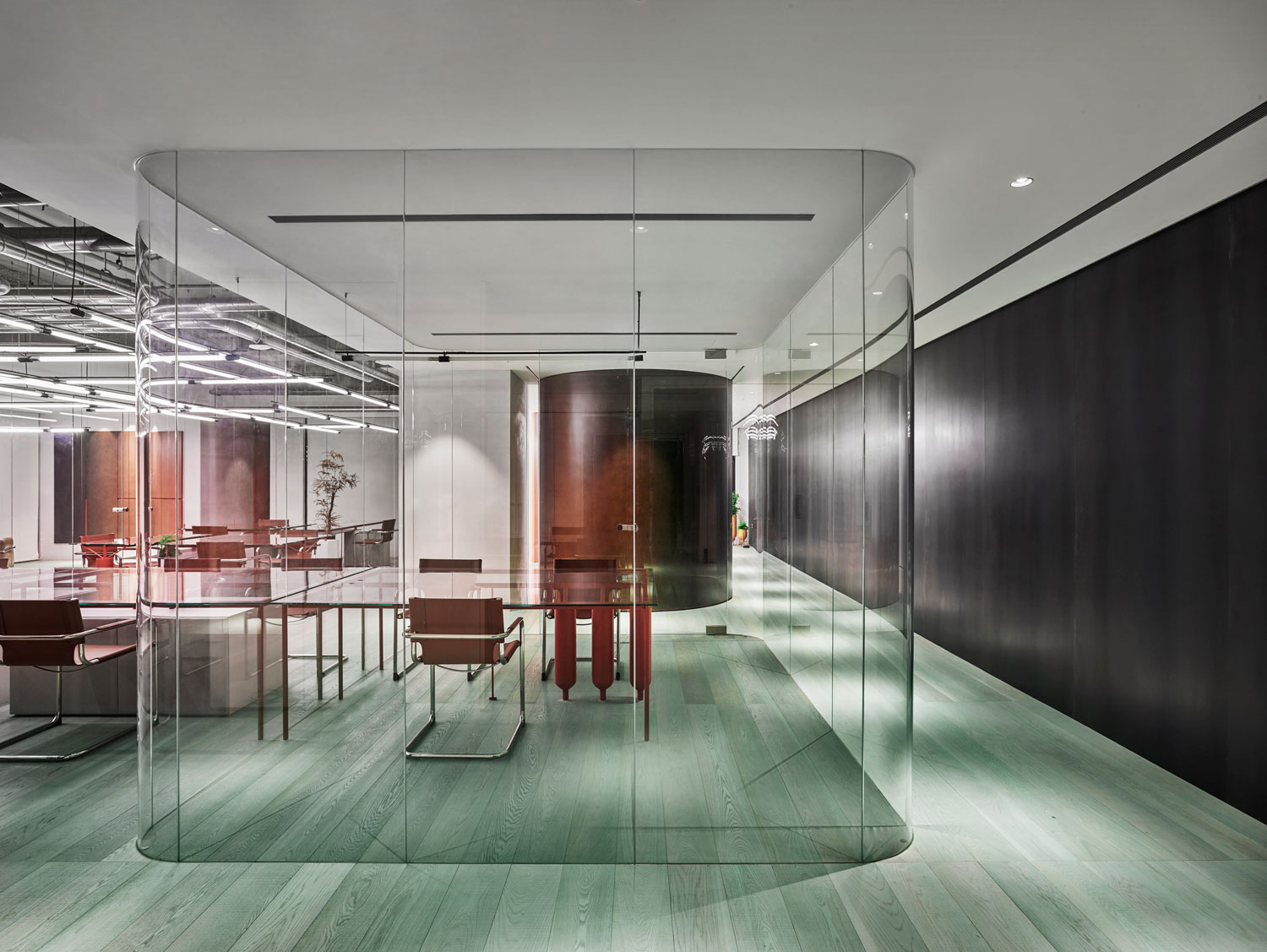 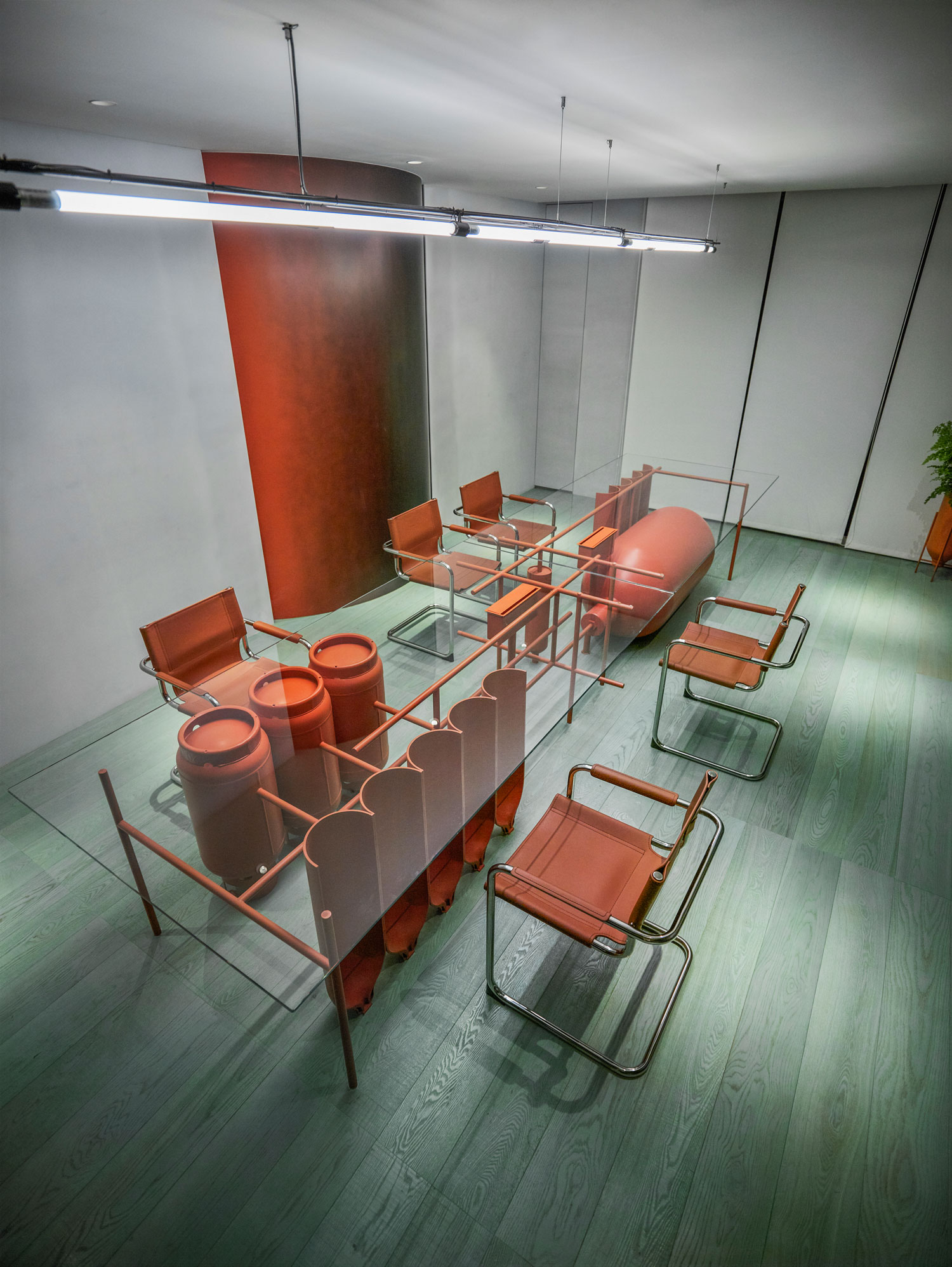 Scale and materiality were also important. Waterfrom reconstructed blast pipes and circuits of different dimensions through long customised tubes. Varying dimensions and height light are reminiscent of the movement of gas in the pipes. Rust on black steel represents the passage of time. Large scale pipes, perhaps seen as artistic objects, are displayed in the large open space, transforming the area into an artistic background using irregular orange paint and dramatic shadows.

Curved delicate branches and leaves of green plants grow from the steel cylinders. Not only do they add a natural element to the man-made lab-like space, Waterfrom see it as a micro-world of change in substance. “Roots and stems acquire water and nutrients from the soil and transform and diffuse oxygen by photosynthesis. The cycle resembles the transfer among solid-state, liquid state and gaseous state of substances in nature. By a little plant, we quietly and deeply breathe and change breath.”