Kirsty Lillico has cut her own unique path to examining architecture

From a large, light, shared space in Wellington’s Anvil House, Kirsty Lillico creates amazing artworks using textiles as her main medium — cast-off carpet, to be exact. Sometimes she buys offcuts or end-of-rolls from carpet shops, sometimes she finds it on the street, and once, she scored a really good stash of white shagpile that was being ripped out of an apartment on the waterfront, got a trolley to load it onto and wheeled it back to her studio.

Kirsty, how did your practice come to take this particular direction? I suppose it started during my Master of Fine Arts at RMIT in Melbourne, when I decided I was going to ‘solve’ fashion by designing a uniform. I started to make connections between clothing and architecture. Both are systems we inhabit that are protective and can be used to express identity. These ideas continue to inform my process.
A few years ago, I had a studio in Lyall Bay next to a carpet warehouse that threw out used carpet taken from houses and offices, and I realised its potential to communicate my ideas. It was free and meant I could work at a large scale. Its epidermal — skin-like or hide-like — quality references the body in a less literal way than I had been.
For me, the carpet has a conceptual link to modernism, one of the most successful and durable styles ever invented. Now, we all live in neo-modernist houses with neo-modernist furniture and carpet that’s all one colour. I see one-colour, industrially produced carpet as a minimalist monochrome that reflects the throwaway culture we live in. 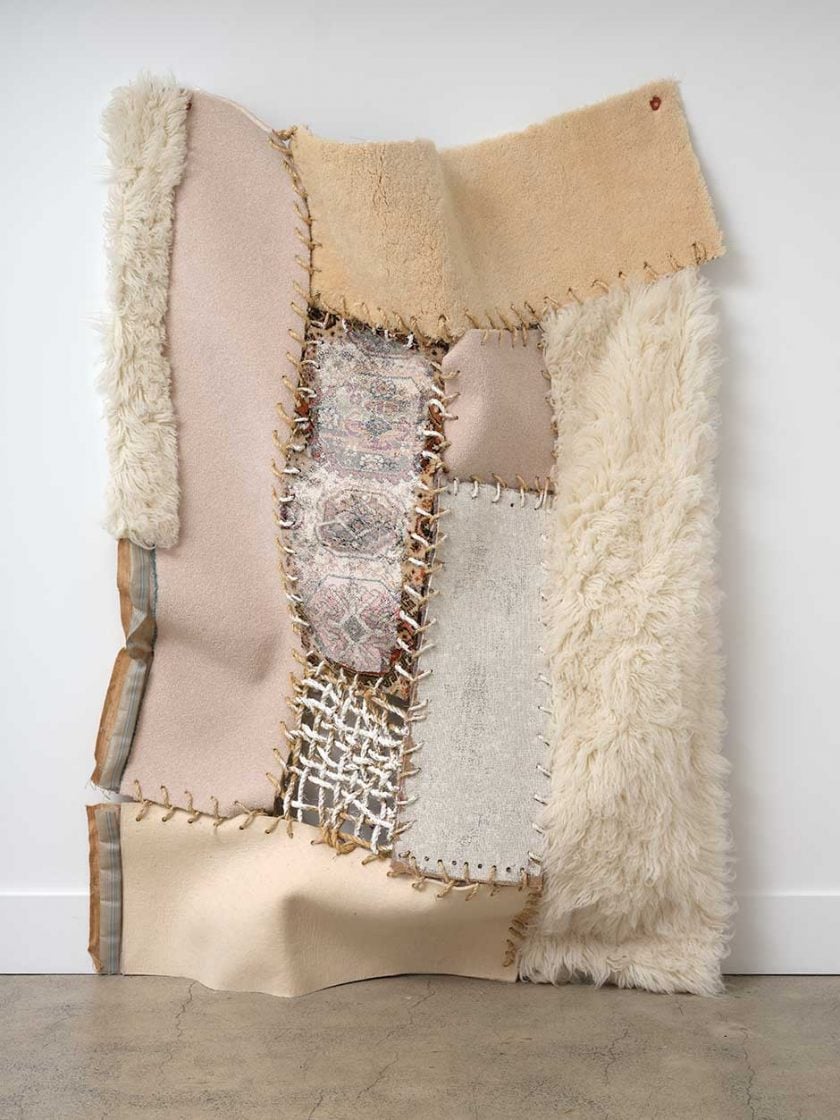 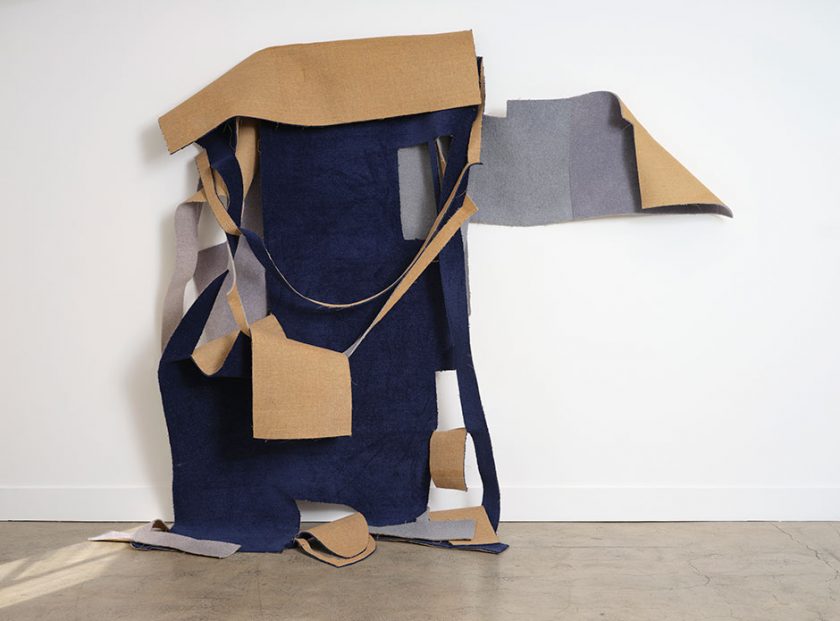 What are the creative and technical steps to making and displaying your extraordinary large-scale pieces? The making part usually starts with drawings and maquettes made of craft felt painted on one side, to approximate the colour and flex of the latex glue and hessian layer on the reverse side of the carpet. The craft felt doesn’t fall in the same way that carpet does, but the maquettes give me some sense of the shapes, and guide the final cuts I’ll be making in the carpet.
Then I make a bigger version of the drawing on brown paper to use as a template to overlay on the carpet. I cut through the paper and the carpet together, a phase that’s interspersed with wrestling the carpet onto the wall and screwing it to the wall in different configurations.

Do you have any regular rituals that get you in the zone in the studio, or out of it if you need to unwind? I wish I could say that I bust out some yoga poses or do some chanting or something, but really, I read the internet. At the moment I’m cutting carpet, so I have to take a lot of breaks to save my body. I worked in a kind of frenzy after last year’s lockdown; I cut lots and lots of building paper for my lightboxes project Building Paper in Cobblestone Park in Vivian Street in a very short period of time and killed my arms.

What does your work teach you? To appreciate the process, not just the outcome. 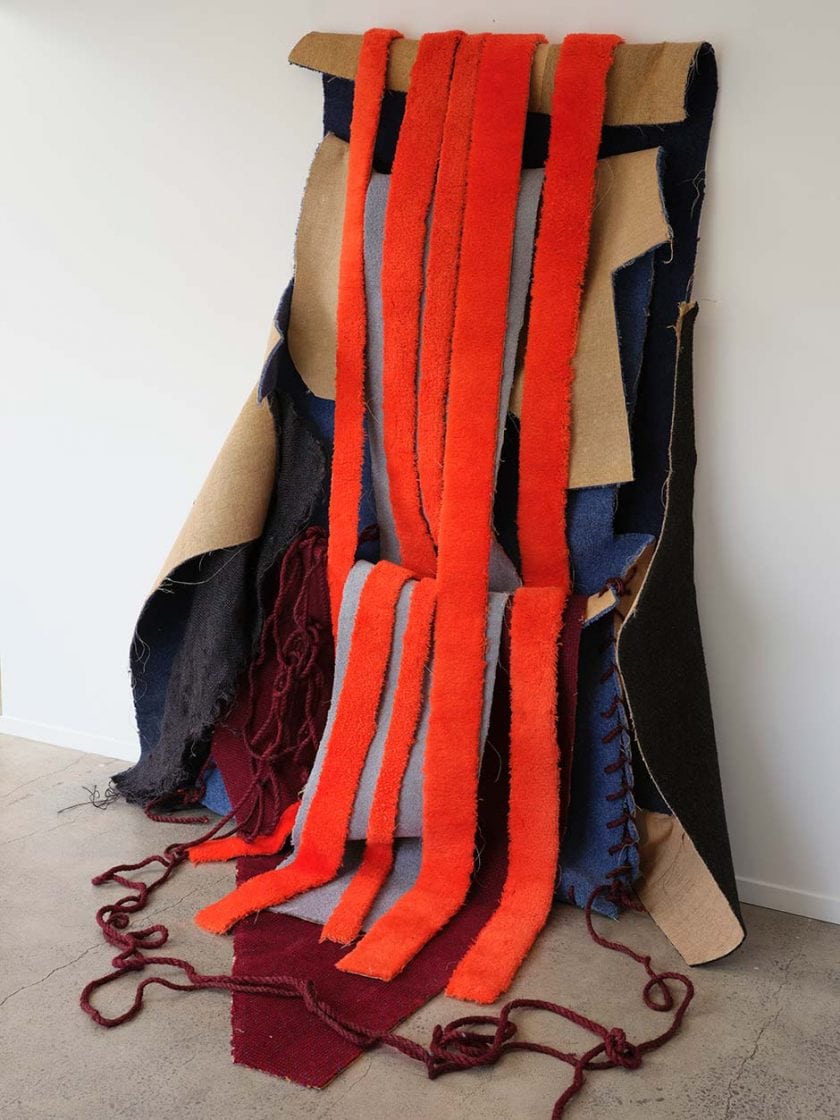 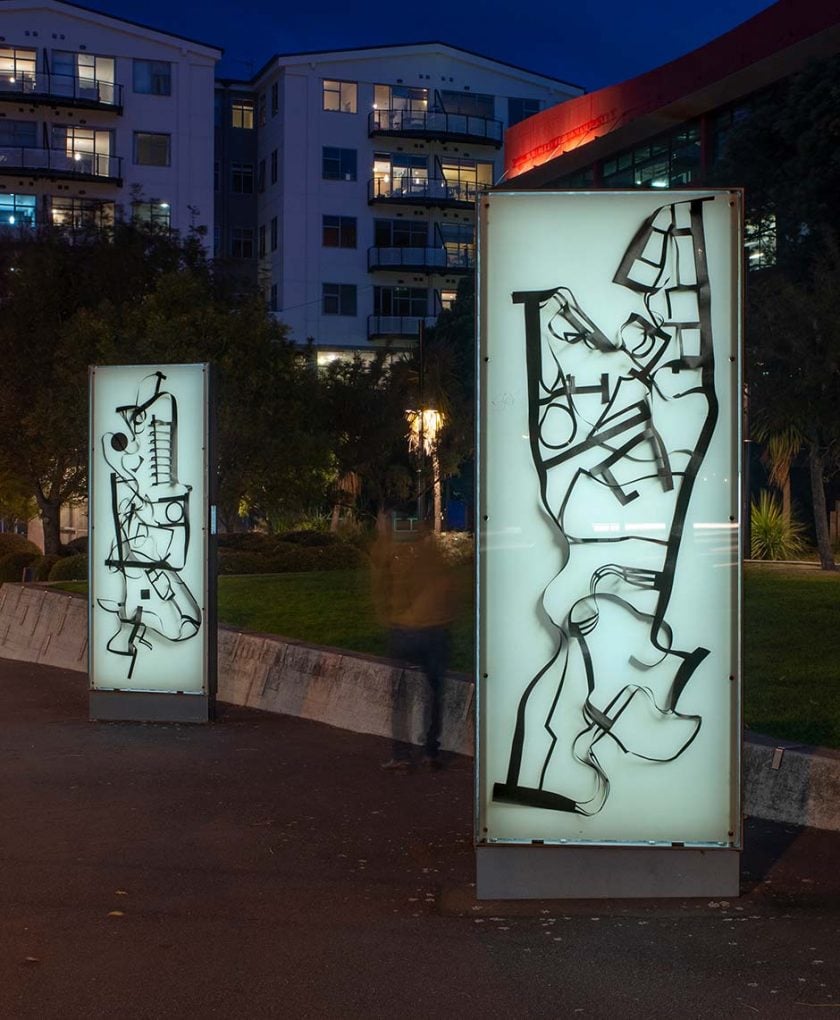 TOP Mother. ABOVE Building Paper. Related to her work for the upcoming Toro Whakaara shows, Kirsty’s produced pieces with an architectural theme in the past and says it’s an ongoing area of interest for her courtesy of the modernist concrete block of flats she lives in, built in 1959. “When my partner Greg Simpson and I moved in 12 years ago, I became aware of the ways that it directed our behaviour and our interactions with each other. I started to speculate that the ways we inhabited and decorated it might fail to live up to the expectations of the architect or ideology behind the architecture. That curiosity started seeping into my work.”

You’re one of several artists contributing to the upcoming Toro Whakaara: Responses to our built environment exhibition in Auckland and Christchurch — what do your works explore? Each artist/designer in this exhibition focused on a particular geographic location or site. I first became interested in the Gordon Wilson Flats on The Terrace in Wellington when I saw a thread on Facebook by Victoria University students perplexed by the vacancy of this enormous building, owned by the university. I started following the university’s attempt to get the area rezoned and the building removed from the City District Plan’s heritage list.
The building has an extremely conspicuous presence. It’s derelict, empty and looming over a city beset by a chronic housing shortage. A lot of people can’t see the heritage value of this building and think it’s just an ugly concrete slab. For me, it links to my interest in the history of high-rise social housing, and in a previous Labour government’s experimentation with high-density inner-city housing as a way to address sprawl and improve living conditions during a time that parallels our current housing crisis.
I’ll be using two separate spaces at CoCA in Christchurch, both lit by natural light during the day from skylights. One space will hold a sculpture made out of purple-violet carpet, ripped out of a chapel designed by New Zealand-Austrian architect Fritz Eisenhofer. In the second space, I’ll hang group of magenta and black felt sculptures machine-cut from digital drawings of the flats’ various floorplans — studio, one-bedroom, two-bedroom. The cuts will vary, so that the folds of each sculpture fall in a slightly different way.

How did the process of making this body of work unfold? The main decisive moment was around the purple carpet. I’d been given it by a friend who’s a cemetery assistant at Whenua Tapu in Porirua, where the chapel was being renovated, and had it sitting in my studio for a while, but I was feeling a bit daunted by the colour. I have so many associations with that colour — religion, sexuality…Prince? Those Silk Cut cigarette ads from the late 1980s?
But then I thought about my cinematic influences, in particular the films A Clockwork Orange [1971], Suspiria [1977] and The Shining [1980]. The interiors in these films employ a bright ‘pop’ colour palette that’s a contrast to the psychological horror that plays out within them. I’m interested in the way that modern architecture has been stigmatised, in part through its inclusion as a backdrop in dystopian works of fiction.

What have you got coming up work-wise after this? My work will be included in a group exhibition in Whanganui at Sarjeant on the Quay, curated by Greg Donson, which brings together artists who utilise found or unexpected materials. I’m making some reliefs made of deconstructed sportswear.
I’m also participating in textile festival Threads in Wellington in March, for which I’ll be working with textile waste — leather offcuts — provided by leathergoods brand Yu Mei. My artwork will be exhibited in their flagship store in Victoria Street during the festival.

Part of the New Zealand Institute of Architects’ Aotearoa Festival of Architecture, and Objectspace and CoCA’s programme partnership, Toro Whakaara: Responses to our built environment will open soon in Auckland and Christchurch. Visit , and .