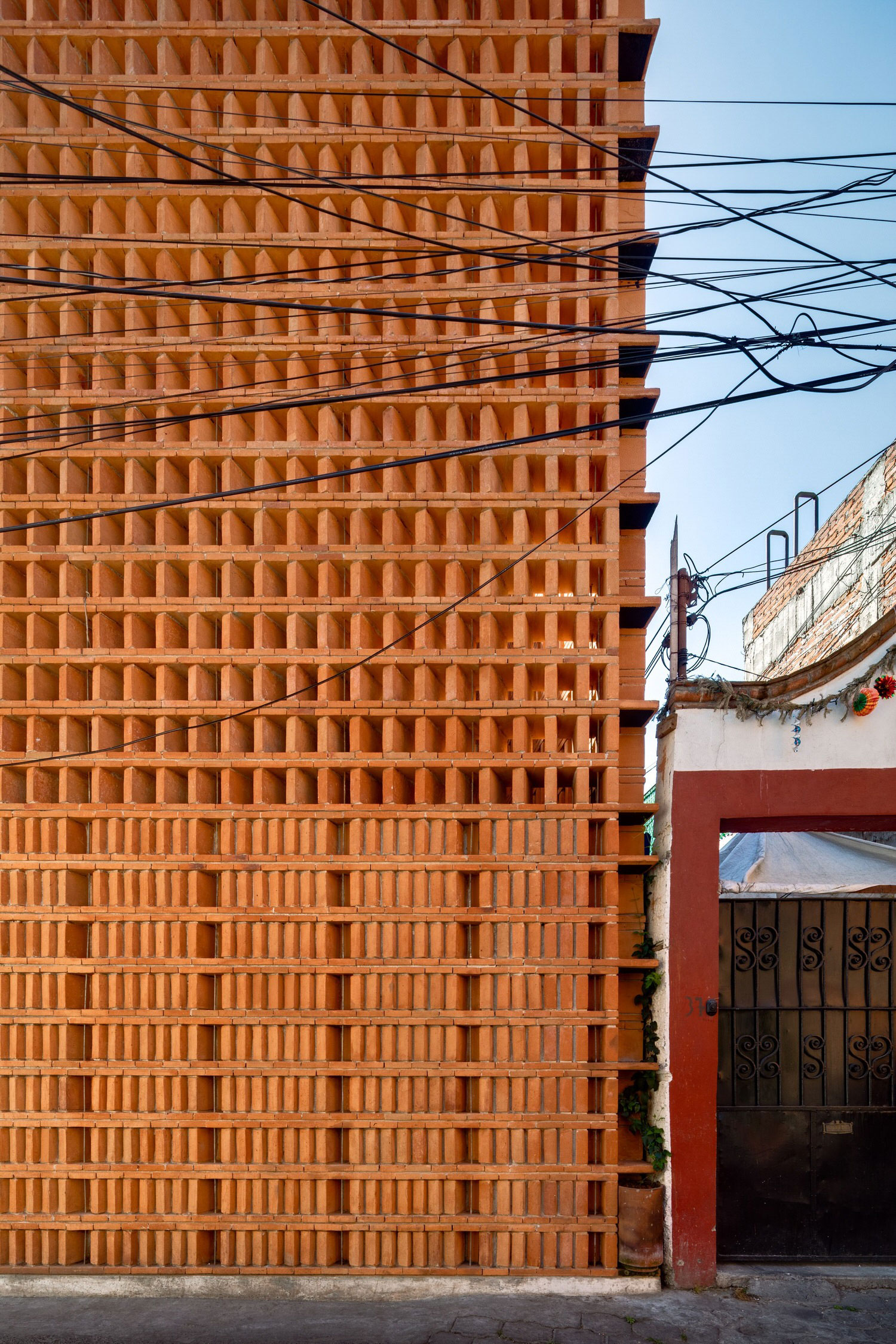 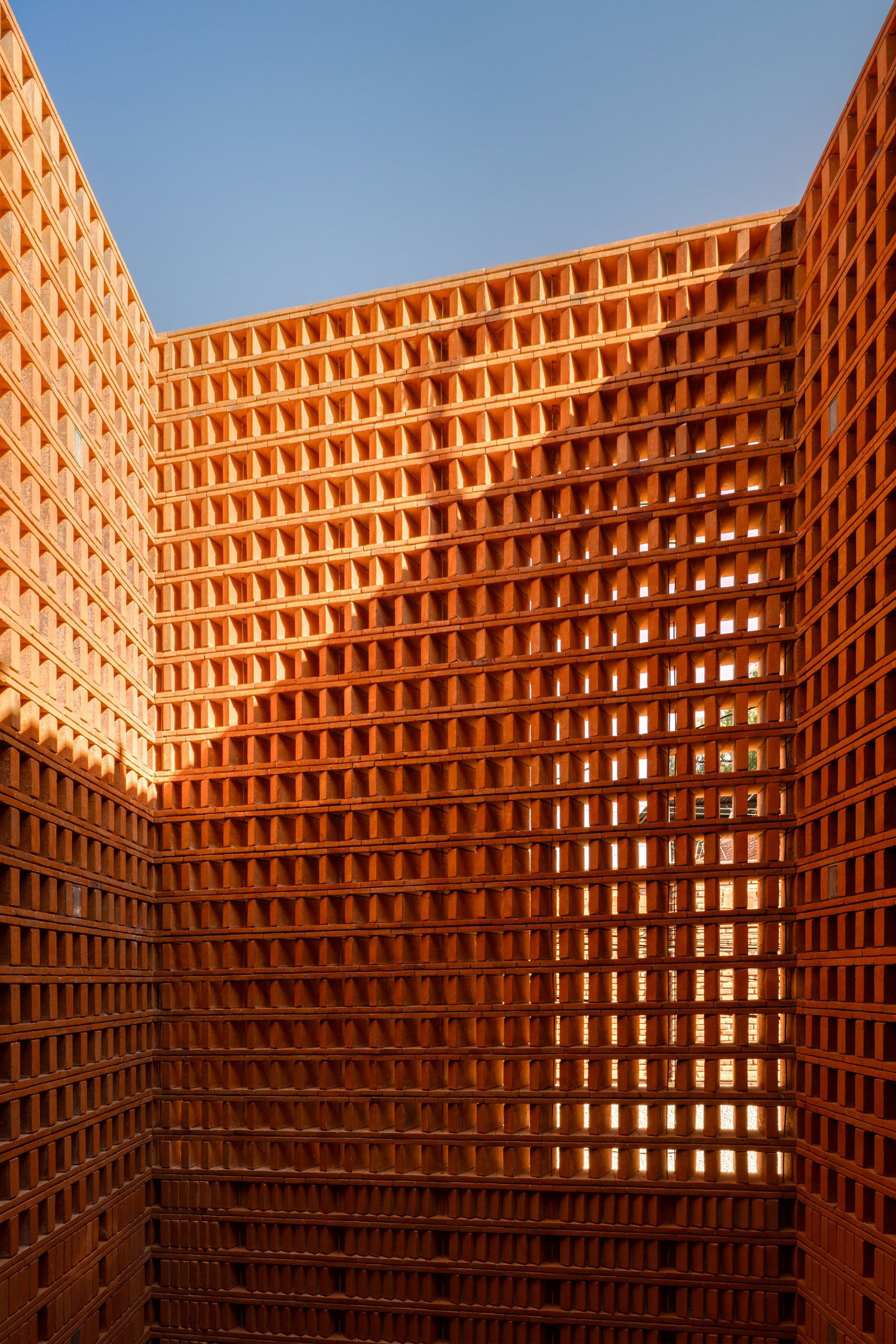 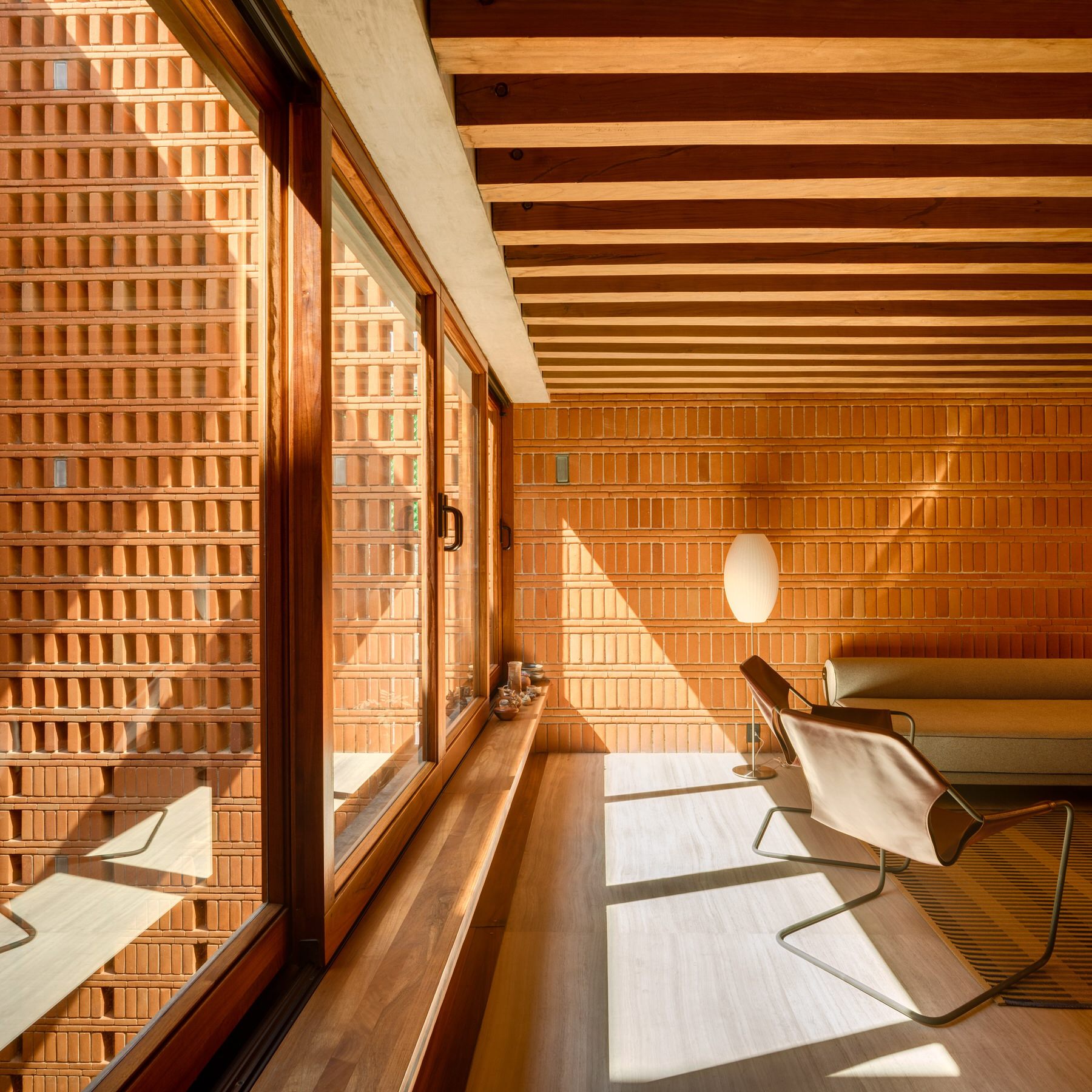 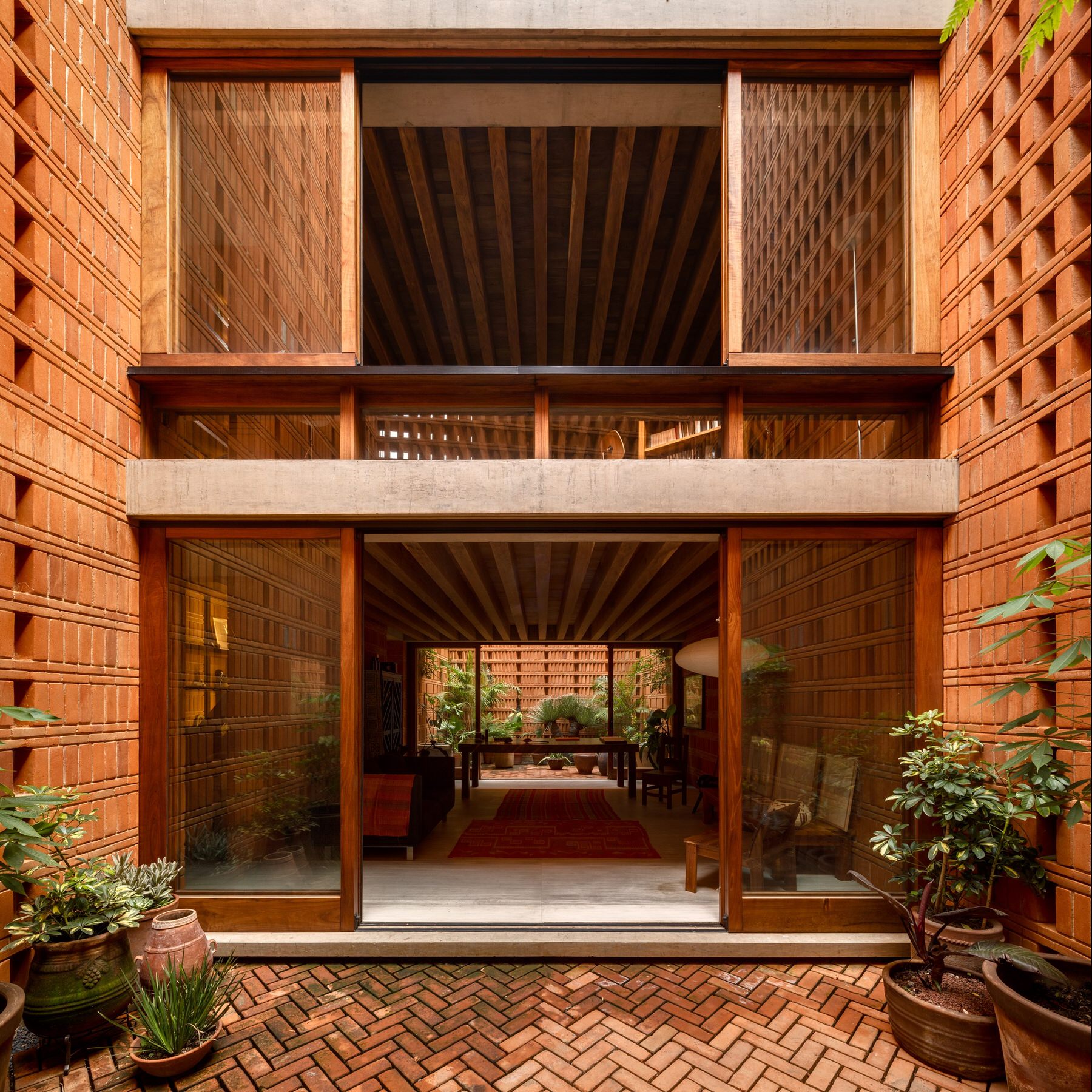 After spending many years travelling and documenting her curiosities, celebrated Mexican photographer purchased a small 100 square metre site to serve as her extended archive and private space for guests and curators. Located just a block away from her house and on the streets of neighbourhood Nino Jesus, New Mexico, she commissioned her son Mauricio Rocha from to transform the narrow site into what is now known as Iturbide Studio. Two years in the making, the project is now affectionately nicknamed as Iturbide’s ‘factory of bricks’ – Graciela Iturbide’s eponymous studio is an enchanting space that I’m sure many would love to work in.

Having previously designed his mother’s current house (and another one in the making), Rocher was entrusted with a relatively free brief on the condition that the architecture would be made of . Travelling to Puebla with Gabriela Currillo – a city known for ceramics, the pair commissioned four uniquely designed bricks for the façade built right at the edges of the property. Drawing inspiration from the mechanics of a camera’s aperture, Rocher strategically arranged and slanted the bricks to draw external light while protecting the internal space from outdoor spectators. From the ground floor, bricks are arranged vertically close to each other and gradually disperse as they travel upwards before opening towards a terrace that looks towards New Mexico’s skyline. 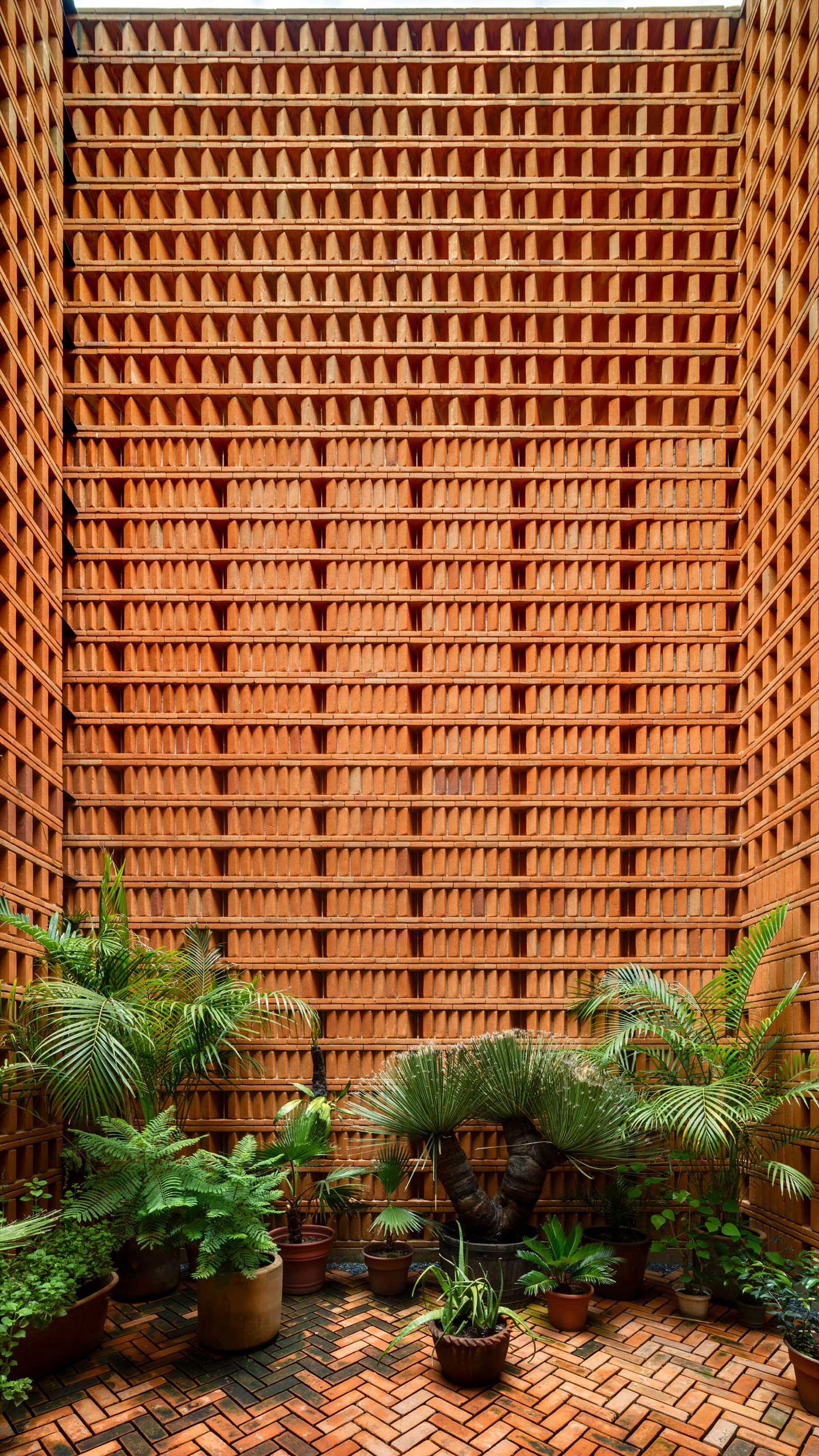 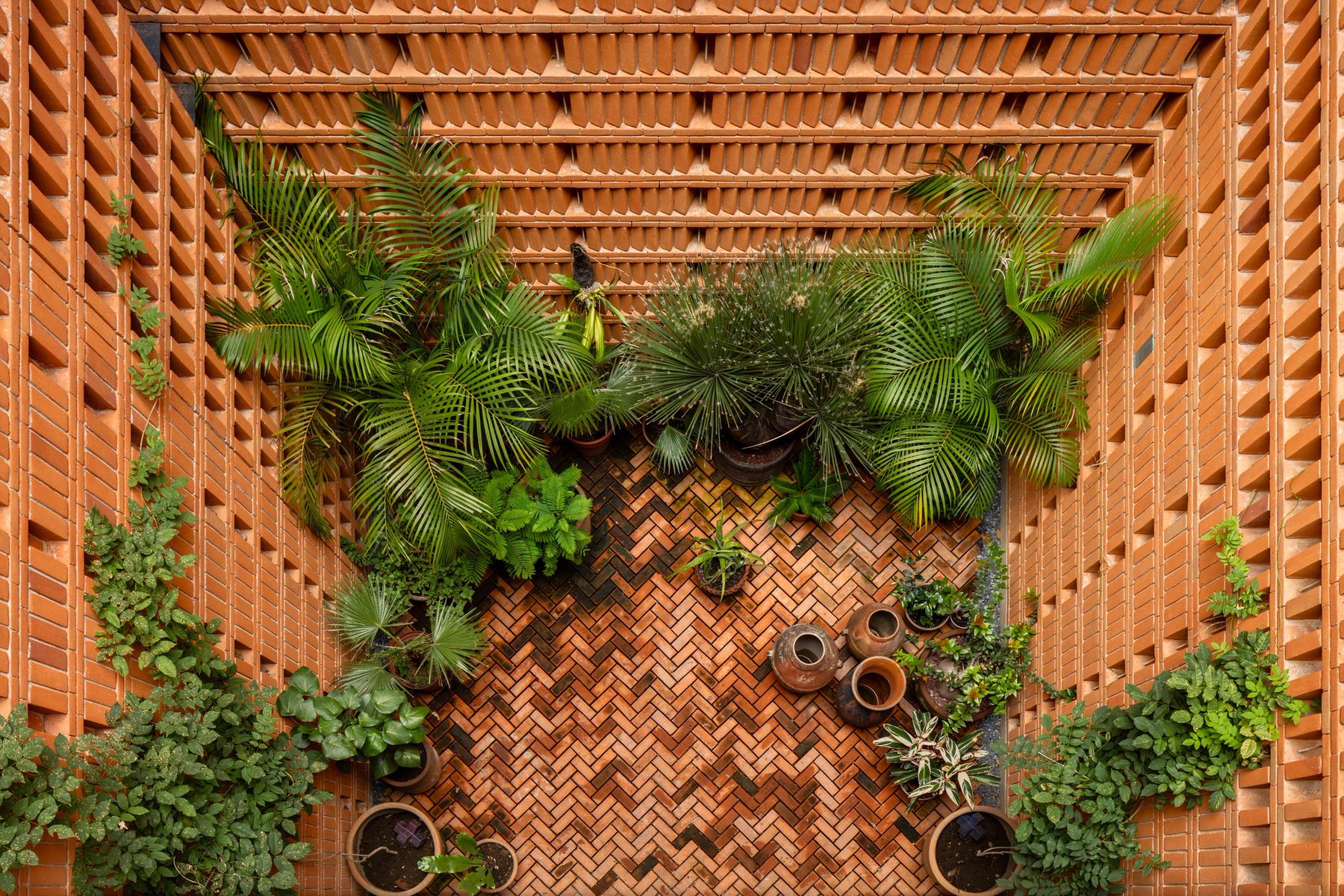 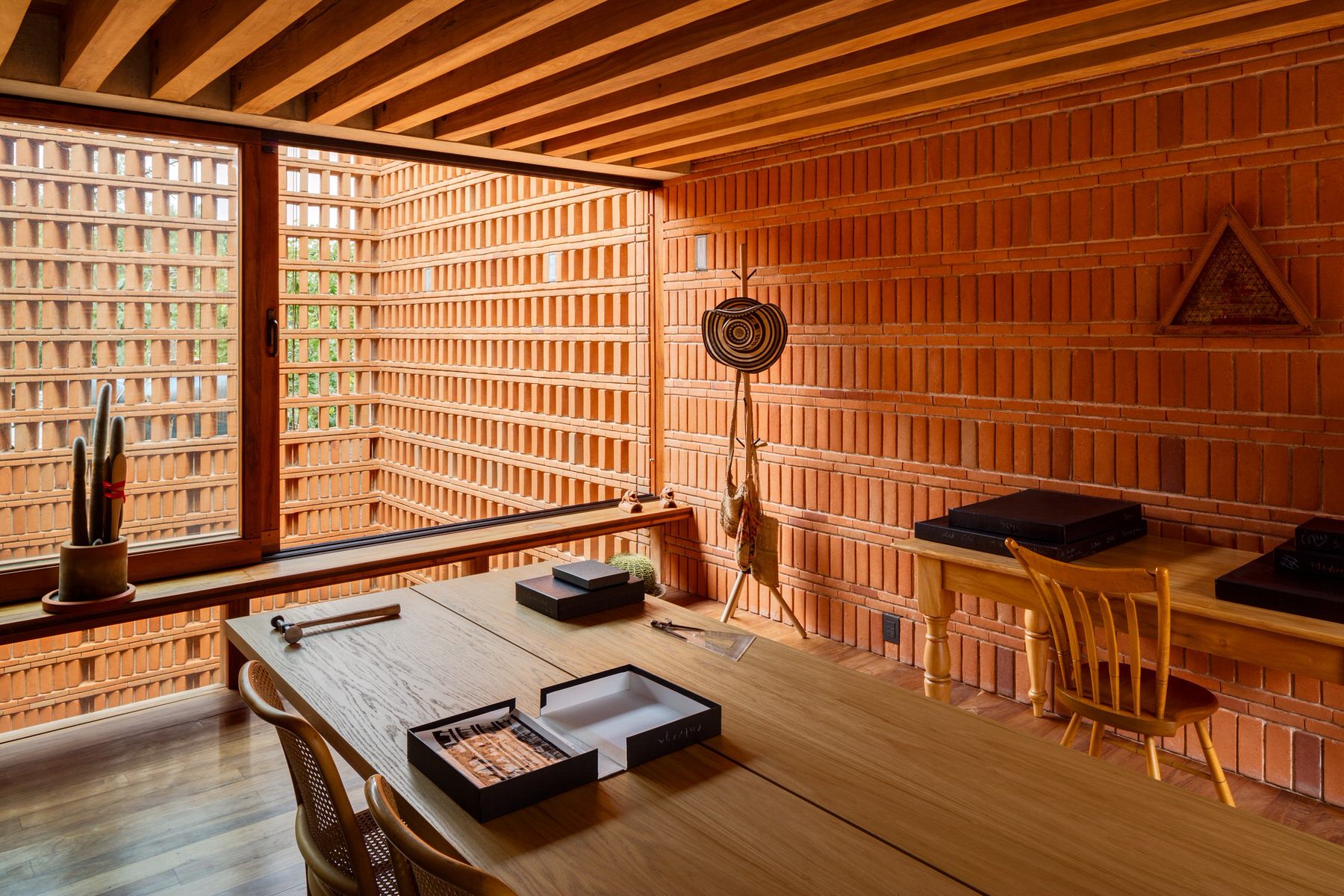 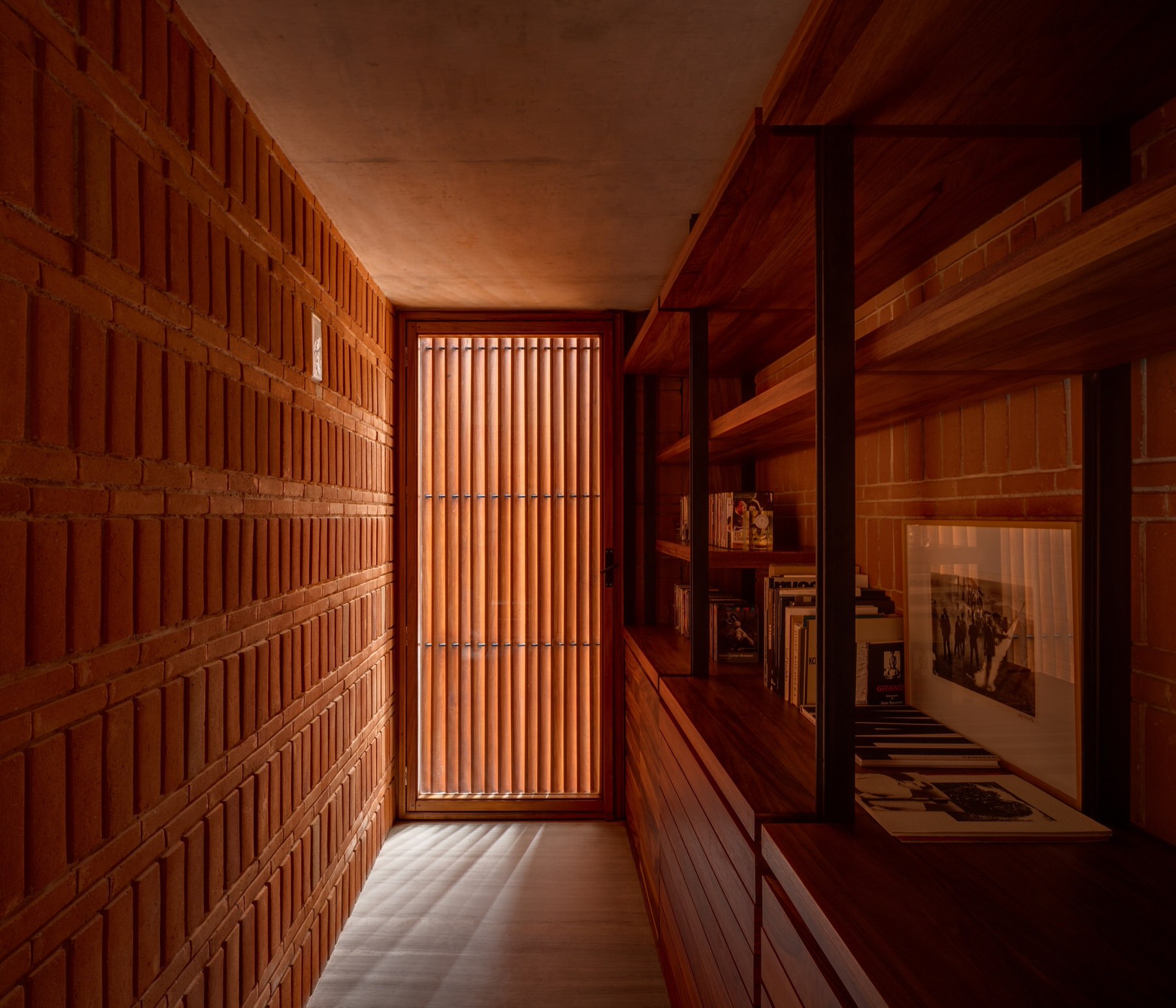 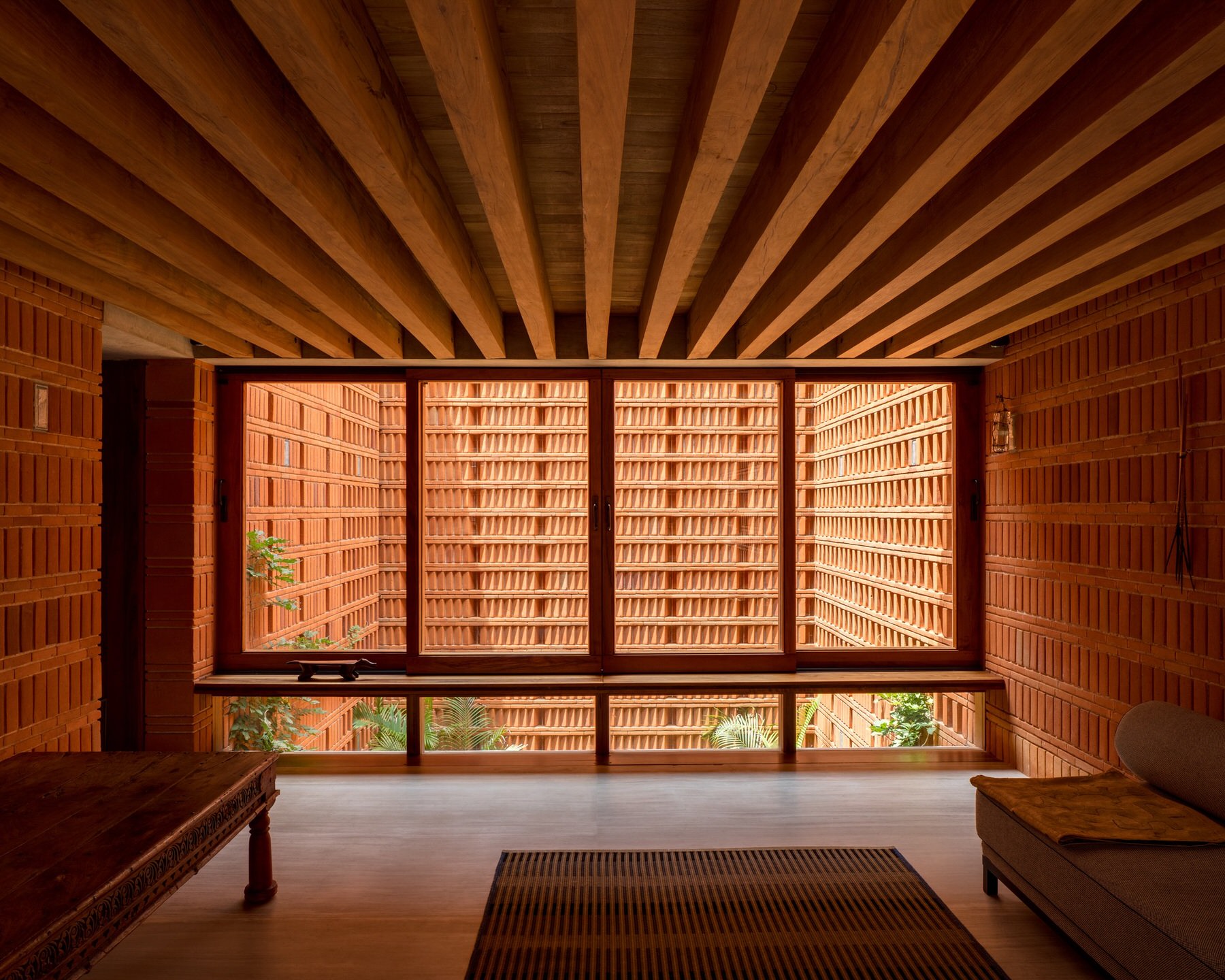 Determined to maintain an illusion of a brick-only building, the architects partnered with structural engineer Gerson Huerta to test various kinds of earthquake-proof structures. Numerous prototypes resulted in brick façade stabilized by steel rods and plates with reinforced concrete to frame the two upper levels and east-side of the façade. The reinforced concrete ‘clad’ in timber are centralised on the site, serving as floor spaces for the main living and entertaining areas with patio spaces on either end to create privacy. These spaces staggered on top of each other, are connected by the staircases on the east – which happens to be where the main entrance and other services such as the kitchen on ground floor and bathrooms on the upper floors are placed. Almost like a t-shaped plan, it becomes an effective light basin and ventilation. 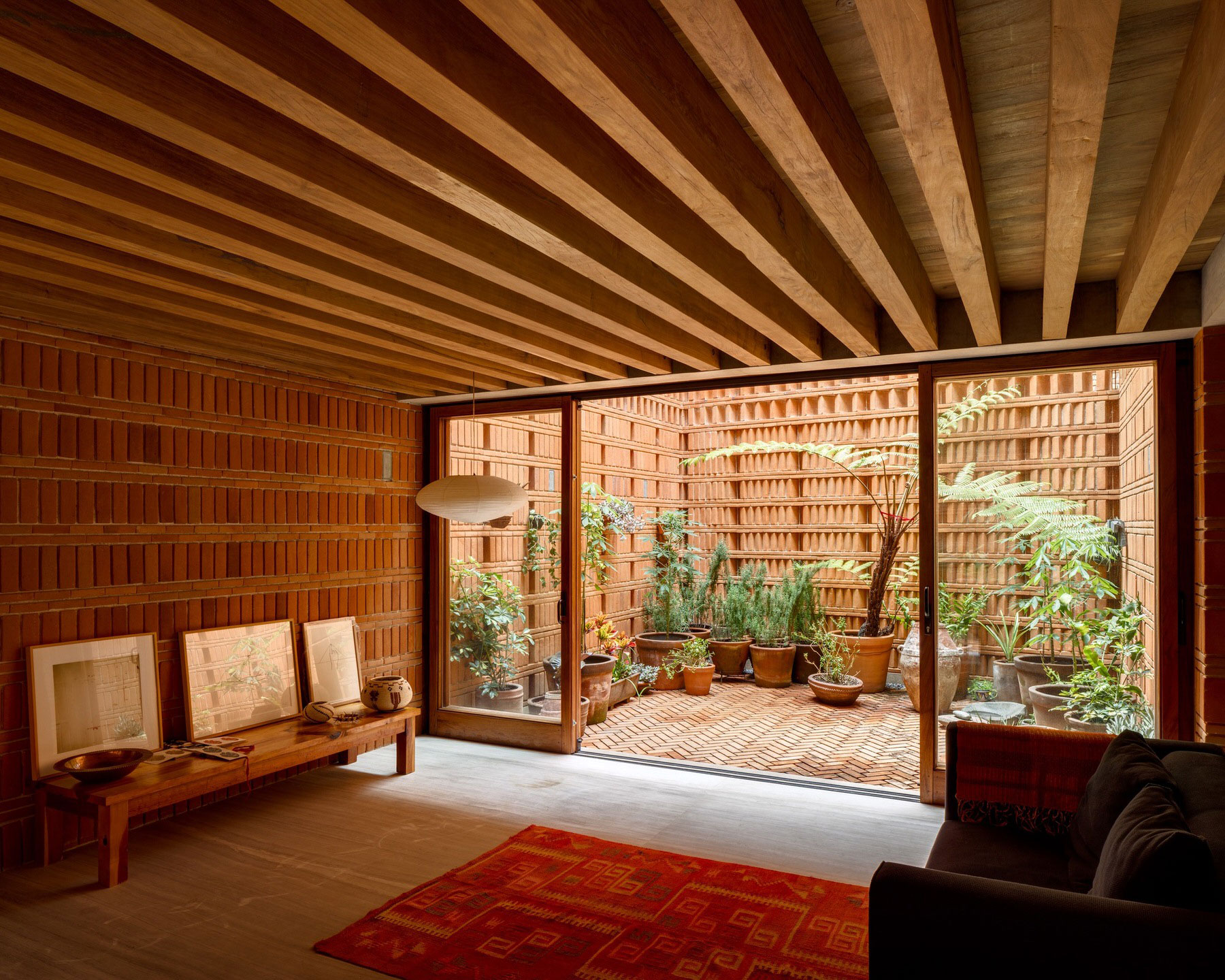 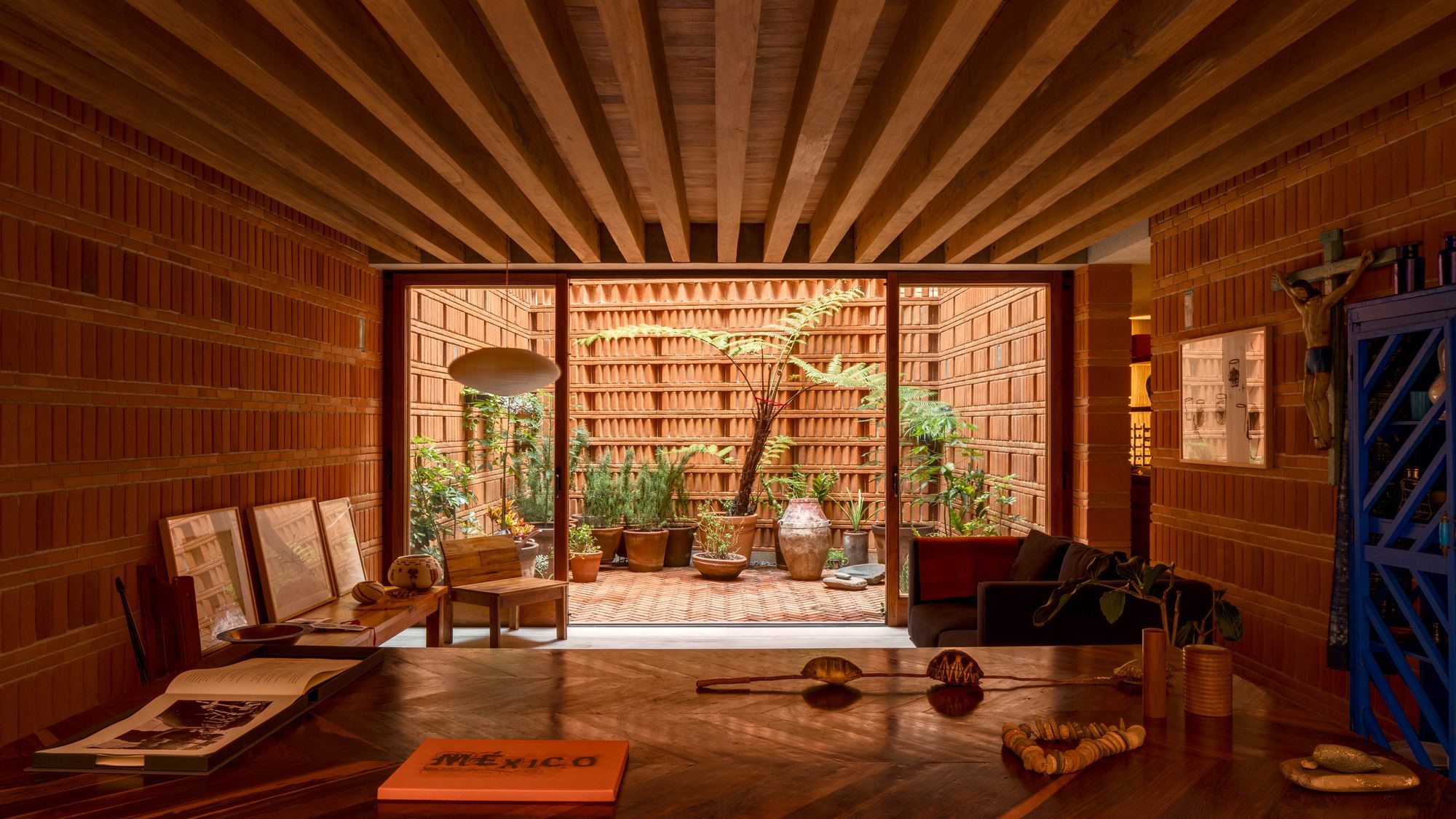 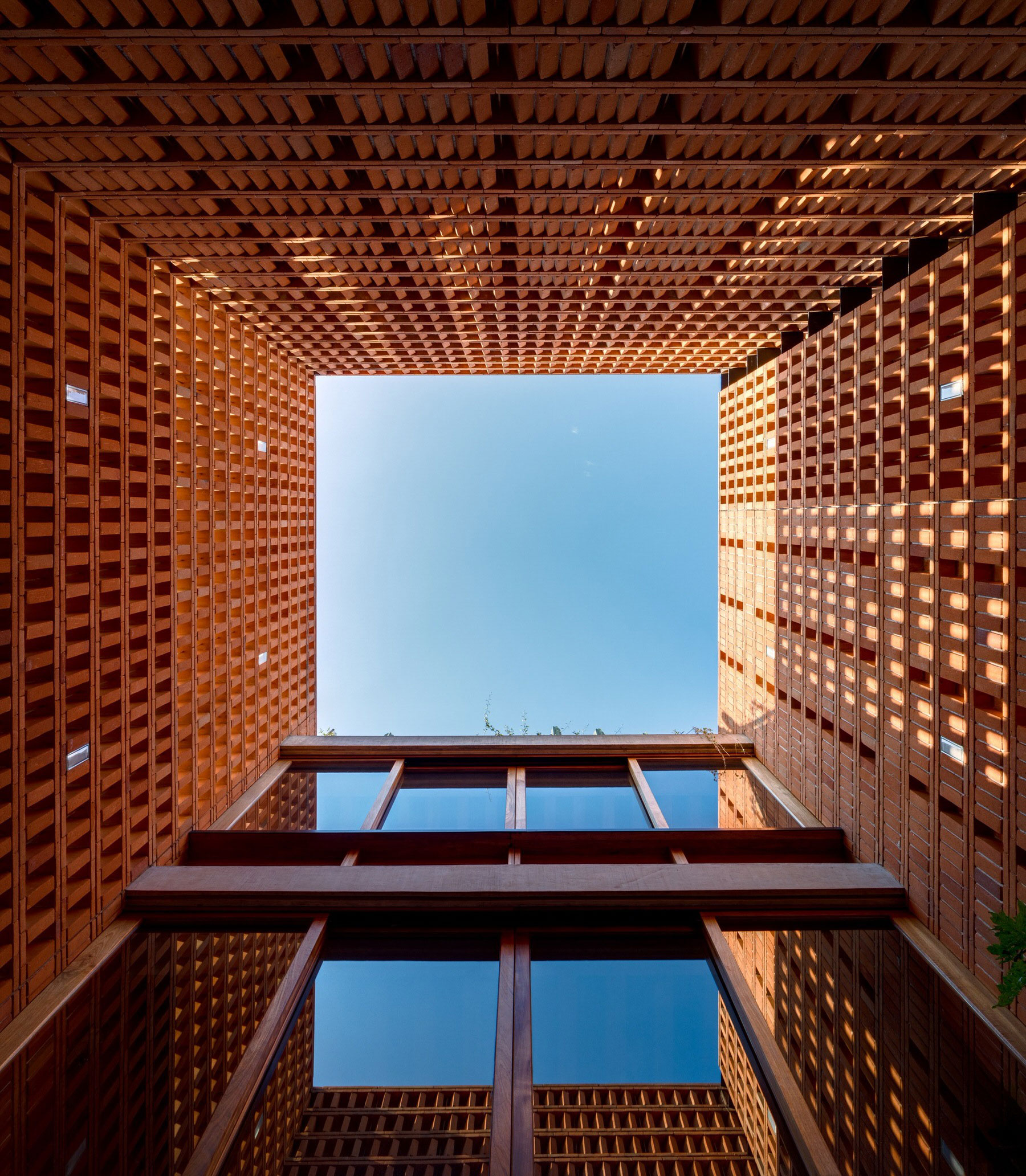 Adding to the illusion that the house is barely supported by concrete the architects sourced Tzalam wood from Mexico’s tropical south to support the floor slabs. For consistency, the hardwood is also used in the wide staircases, custom bookshelf and the sliding doors that sits on the threshold between the internal and patio spaces. As an analogue camera enthusiast, I keep finding myself comparing the monochromatic orangey-red to Lomography’s Redscale coloured film or the darkroom. Although, with the added greens of potted cacti and native plants and natural light – it dissolves that comparison almost immediately.

Generally, I feel that studio spaces would be a direct reflection of the artist’s artworks. However, drawing in the rich textures and characteristics of the neighbourhood, this is truly a studio space that speaks of a comforting escape. Imagine, stepping inside to enjoy the conversation with a friend while admiring the fauna and natural light streaking playfully against the collected from Iturbide’s personal journey. This project is welcoming contrast to the artist’s moody black and white photographs.