Italy to Canada Travel Vlog: Going Home for the Holidays 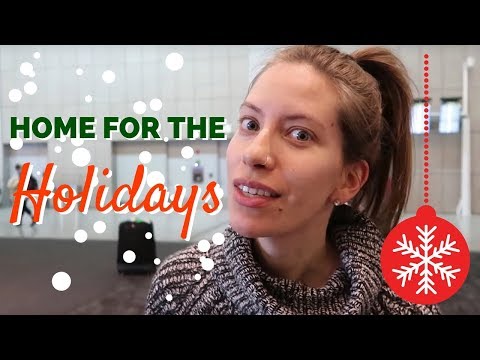 Join for journey from Italy to Canada in this travel vlog as we take a series of trains and flights to head back home. After spending most of the year in Europe it was finally time to come home to Canada for the holidays. We started our journey off in Pompei taking the regional circumvesuviana train to Naples before connecting to a fast train to Rome.

Upon arriving in Rome we checked in at a cheap budget hotel nearby the main train station. Waking up early in the morning we walked to the train station and ended up taking a shuttle bus to Fiumicino instead of a train to save a few bucks which we ended up spending on our last pizza, panini and gelato at the airport. Our first flight to Lisbon from Rome with TAP Portugal was delayed because of weather and ended up being a turbulent flight with the seatbelt sign on the entire journey. With next to no time to spare we literally ran to catch our next flight and were the last passengers to board.

The flight with TAP from Lisbon to Toronto was just as bumpy and was really uncomfortable. Upon arriving in Toronto we were merely relieved to be off of the plane. We’re both nervous about flying and back to back turbulent flights really frazzled our nerves. However, upon seeing Togo the German Shepherd at Audrey’s family house all was well and we’ll leave it at that.

Hey guys, good morning good morning. We are in Pompei and we have got an epic travel vlog for you because not only are we traveling to Naples and then to Rome but we’re going back to Canada. Yes. Via Lisbon. We’re going to show you the entire journey and we’re starting off on a regional train. What is that train called again? We’re at station Circumvesuviana.

We don’t know when it is coming because today is day two of that holiday. Yeah. The feast of the immaculate conception and everything is shutdown. Yeah. So hopefully we’ll get on a train soon. It is going to be a tight connection with our other train yeah which goes from Naples to Rome. We’re going to be staying overnight. Yeah. And then the following morning we pick up with the flights with TAP Portugal. We’re going to be starting off on a train ending with a German Shepherd dog Togo. We’re going to be hanging out in Audrey’s family house for a while in Brampton, Canada. We’ve got a busy travel day so yeah let’s get it started.

We’ve said goodbye to the trains and now we are going to be flying. It is a day of flying. We were planning on taking the train to the airport. When we got to the station and we noticed all of these airport buses parked right here. It is less than half of the price. And it only takes 45 minutes as opposed to what like 20 or 30 by train. The bus tickets are 6 Euros and the train tickets are 5.90.

We didn’t film the second leg of the journey. The flight from Lisbon to Toronto because first of all we barely got on the plane. I’d say a minute. We were the last people. We made it. Our first flight was late. We had the craziest tightest connection to begin with. Because there was no line at Immigration. That is the only reason we made it on. And the last flight we were just so exhausted and we were and it was so turbulent. It was like 3 hours of turbulence. Back to back super turbulent flights. Like basically the seatbelt signs were on both of those flights. It wasn’t fun but we are here. Back home. Waiting for the luggage. Back in Canada. We’ll see if our luggage made it. There is a good chance it didn’t. Fingers crossed. But we’re getting so close to ending this vlog because we promised you we would show you the dog Togo.

This is part of our Travel in Italy video series showcasing Italian food, Italian culture and Italian cuisine.

This is part of our Travel in Canada video series showcasing Canadian food, Canadian culture and Canadian cuisine.

‘Libre’ and ‘First Sight’ music in this video courtesy of ‘IKSON’ from (SoundCloud.com): https://soundcloud.com/ikson