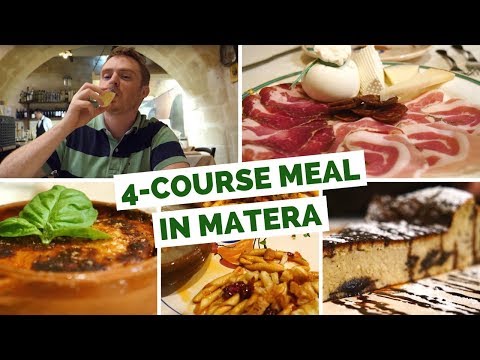 Come join us in Matera Italy as we sample Italian cuisine keying in on eating a four course meal comprised of antipasti, primi piatti, secondi piatti, dolce, digestivo and of course red wine. All in all, the Italian food we ate included a meat and cheese platter, various kinds of pasta, a zucchini cheese bake similar to a lasagna, ricotta cheesecake, red wine and limoncello to finish things off. It was a glorious feast of feasts and the type of meal we recommend trying at least once in Italy; however, do bring your appetite as it is a lot of food.

It is lunchtime here in Matera and it is another cold rainy day. I’m using my scarf as a blanket while we eat lunch. But anyways yeah we found this really cool restaurant. It is called Nadi. It is in a cave like most buildings seem to be here in Matera and today we have decided to do a 4 course meal. However, our stomachs aren’t really trained for the Italian way of eating so we’re going to share one four course meal. Between the two of us. No. We already ordered some red wine. Which one did we get?

It is called Primitivo. Nice red wine. We have a little bit of bread and these cute little like round pretzel things. Pretty good. They have fennel. Um, fizzy water and we’re waiting for the first course to arrive which would be antipasti. It is local salami and cheeses.

Guys so this is the antipasto lugano. This is our first dish. And my goodness we’ve already been eating some of the meat because it looked amazing. We couldn’t contain ourselves. We couldn’t resist.

The waiter did tell us that names for everything but I mean I don’t know the language so I can remember maybe like three. I know this one was the ricotta. This is the salumi. And this one I think he said pancetta. The other four I don’t know but they look wonderful. I’m going to dig in. It is a combination of it looks like soft and hard cheeses.

That is very light. And like it has a lot of water content. It almost reminds me of the Bocconcini?

Alright so I have passed the plate over. Sam you’re going to show us the meats. I’m going to show you the meats. What’s going on. I think this is the salumi. Are you seriously using a fork and knife to eat your salumi Sam?

So this pasta here it has red peppers and bread crumbs and this other one we’ve had before it comes with mushrooms and the pork sausage. That’s delicious.

this next one is called secondi piatti. And typically it would be a meat dish but we were in the mood to go vegetarian. Actually this just sounded good. It is basically a baked eggplant. If you could see the cheese. The layers of cheese under there. It has got cheese. It has got tomato sauce.

The final stretch. The fourth course (dolce). Dessert. We ordered a slice of ricotta cheesecake to share.

We just got the bill and this is awesome because they brought us each I should say a limoncello shot. In terms of price point that came to 43 Euros.

This is part of our Travel in Italy video series showcasing Italian food, Italian culture and Italian cuisine.

Music in this video courtesy of ‘Birocratic’ from (SoundCloud.com)