In Sicily, Cannoli is Indeed Holy 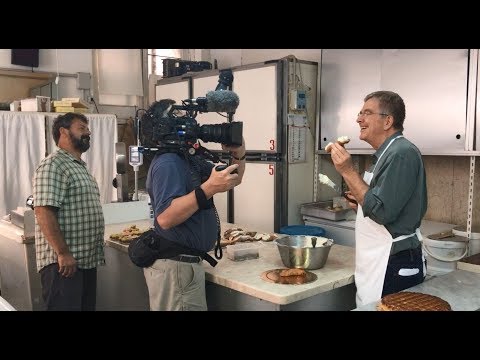 It’s Day 11 of my 100-day trip to Europe, and we’re just wrapping up the production of two wonderful new shows about Sicily — and enjoying lots and lots of cannoli. (I’m not generally “over the moon” for local sweets, but I must say…when cannoli is good, it is really good.)

This clip is actually three clips: me “on camera,” introducing our bit on cannoli from a cool little perch we found; a tiny clip of the cameraman telling me exactly where to hold the cannoli for the close-up (with a nice background — every half an inch counts); and finally, the “tease.” (I open all my shows this way, with a goofy and hopefully enticing snippet of something we’ll share later in the episode).

What you’re not seeing here is a beautiful bit we filmed of the baker stuffing his cannoli. You can see that this fall when Season 10 of “Rick Steves’ Europe” airs across the US on public television.