How you as a tourist can help after a natural disaster


The world’s climate is changing. Natural disasters are appearing to come with higher frequency. We have recently seen several huge hurricanes in the Atlantic that had a peak this summer, plus flooding in South Asia and the earthquake in Mexico. If we don’t change how we treat Mother Nature drastically, this is probably just a starting point. But how will this affect how we travel? And how can we help in the best way? When the tsunami hit Thailand in 2004, tourism dropped radically and there were big campaigns for a long time afterwards, aimed at getting tourists back into the country.

What affected countries really need after a natural disaster is us – the tourists. I met up with Jyapu Shahi who has been a professional guide in Nepal’s capital Kathmandu for 35 years focusing on Durbar Square, a UNESCO world heritage site that was badly damaged by the earthquake in 2015. We talked about how the earthquake has affected tourism in Kathmandu, and what we as tourists can do to help when these kind of catastrophes happen. 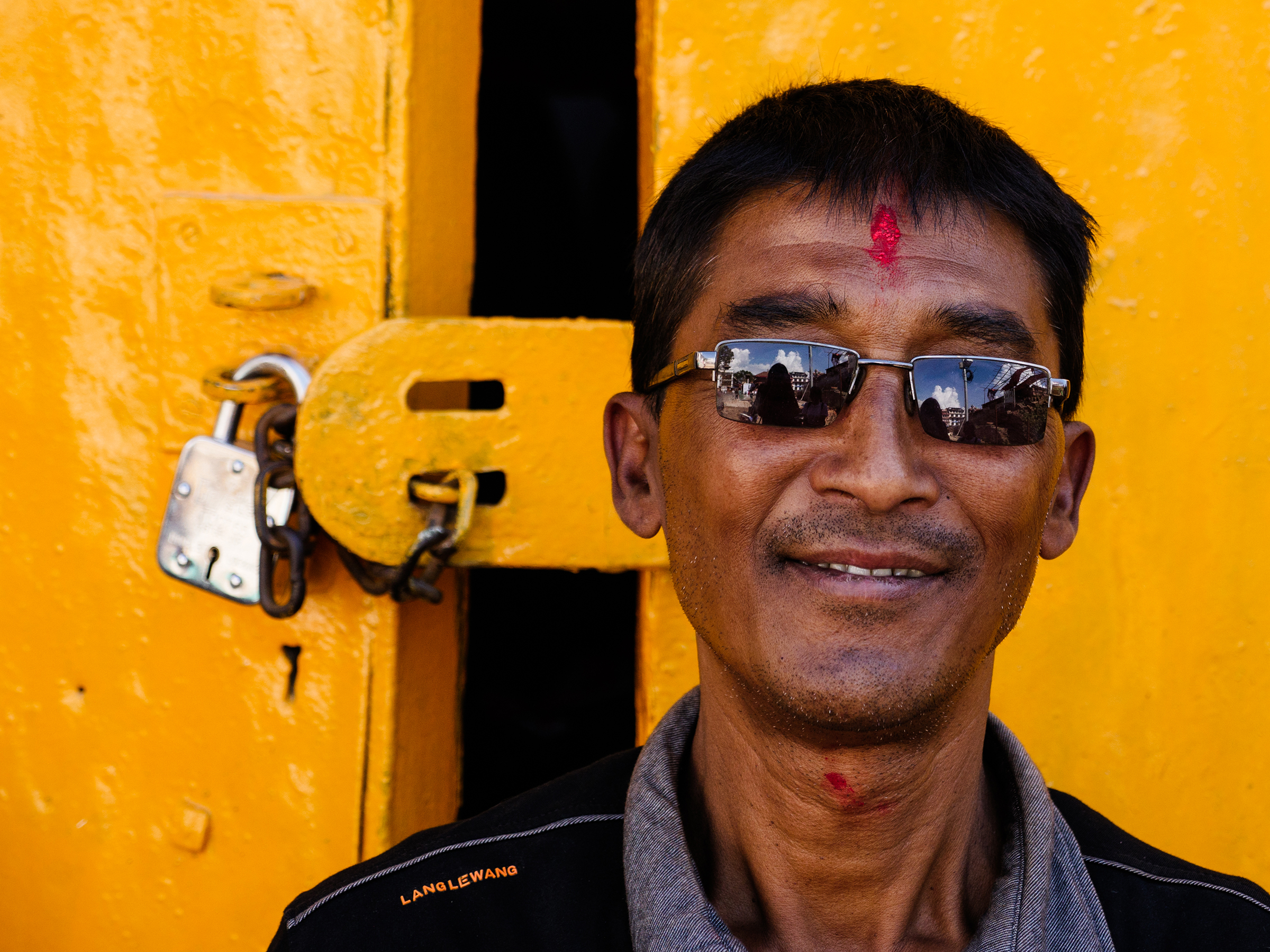 When meeting Jyapu in Durbar Square it is 28 degrees, with a sweaty and chaotic mass of tourists and praying Hindus and Buddhists. It is the last day of the festival Dashain and there’s a lot going on. ”It has changed. We are getting more and more tourists,” Jyapu tells me. He takes me to a spot right in front of a big column. Nothing special really. He then points at the back of it where I see a big stone statue lying on the ground. ”This was the first thing that fell.”

He goes back to 25th of April 2015 when he was guiding a French couple at Durbar Square as the earthquake struck. ”It  was in the morning. 11:57. And it went all black. The sky went black”. For a year after the disaster he didn’t set foot in Durbar Square. He says he was ”Too heartbroken to work”. 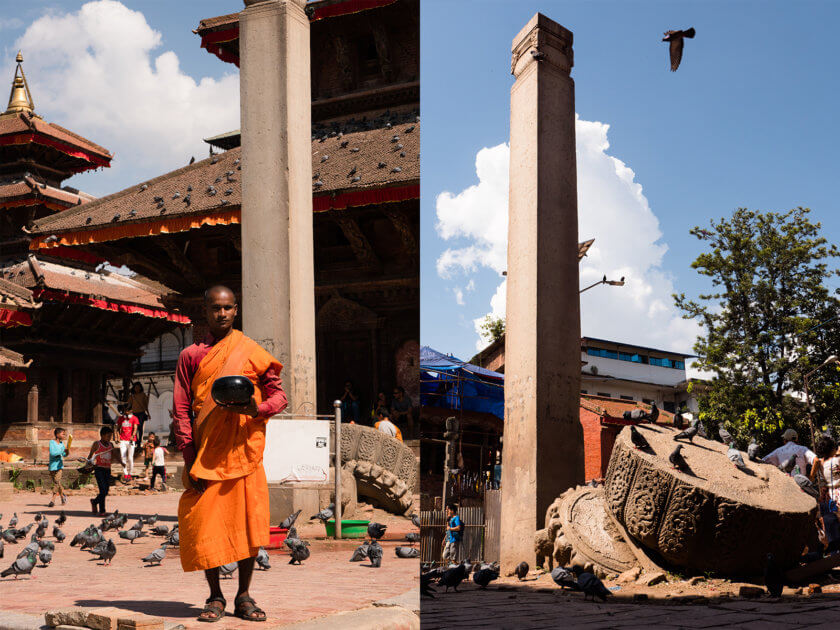 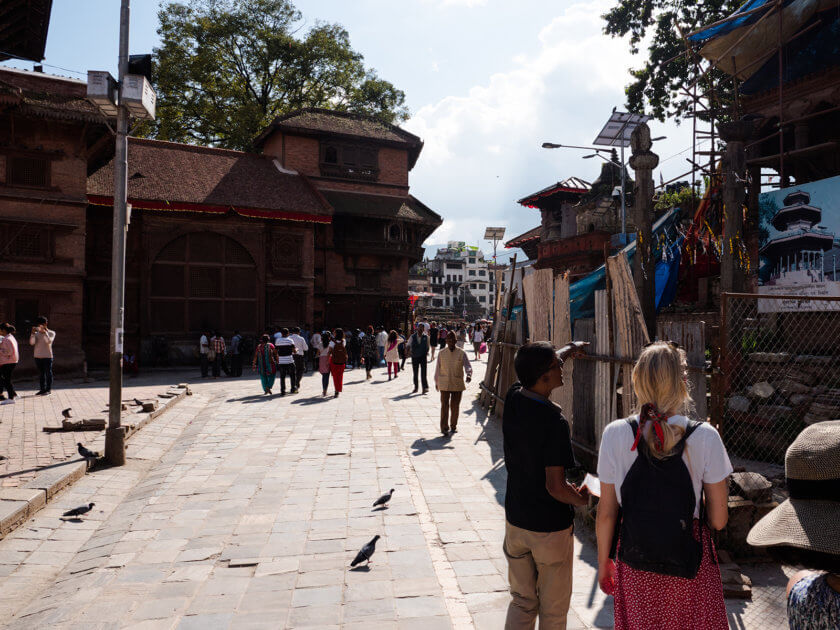 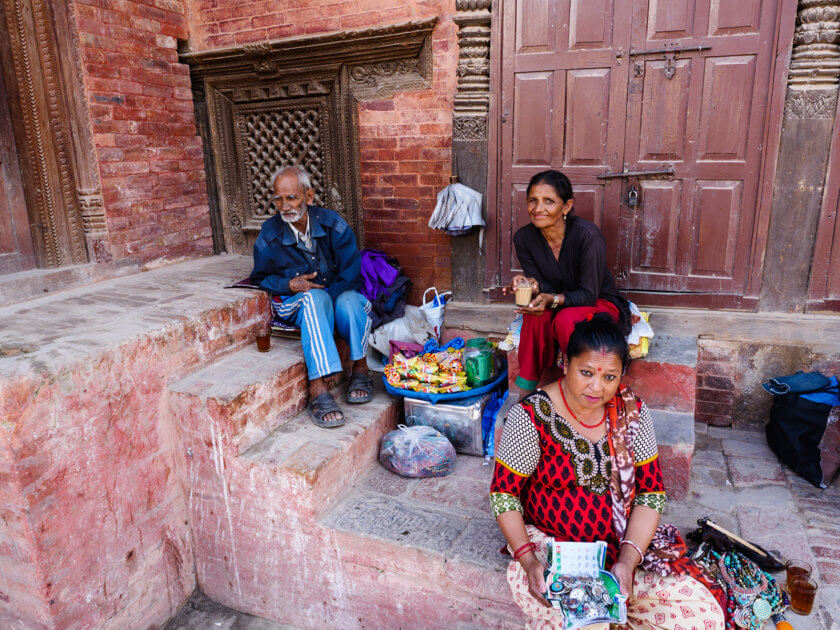 Jyapu shows me where this family used to have a shop (above). Since the 25th of April 2015, they sell their products on the street instead.

This temple (below) used to be the one of the oldest and most famous temples in Durbar Square that once gave Kathmandu its name. This is all that is left. 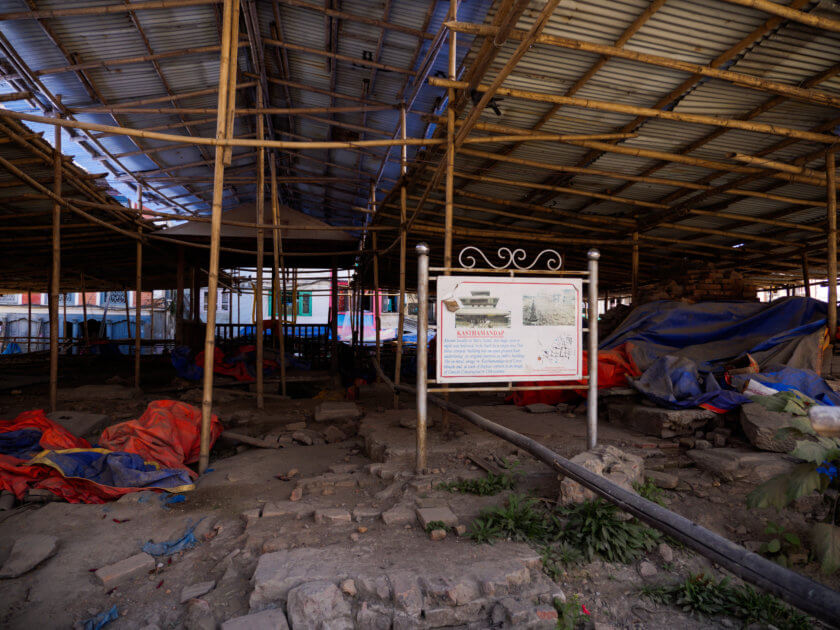 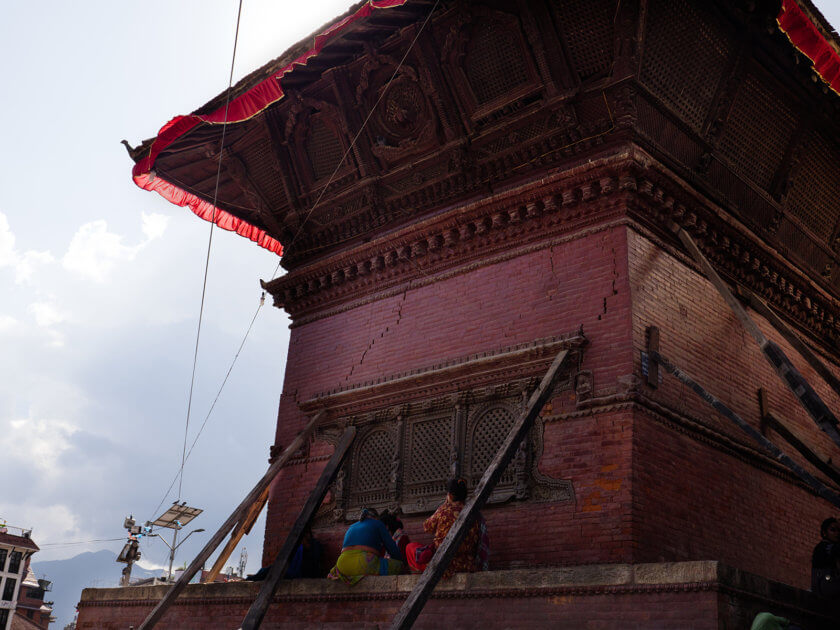 Some of the temples were lucky, like Shiva-Parbati that survived the earthquake with only cracks and some need of  support.

According to The Independent, Nepal’s visitors number higher in 2017 then before the earthquake in 2015, since the Nepal Tourism Board launched a program in Europe to promote Nepal at the end of 2016, to great success. Jyapu is also saying that he can see a big change. Durbar Square is slowly being restored and the tourists are starting to return even to this area.

Luckily Nepal’s tourism is growing after a terrible day when 9000 died and much of its cultural history was left in ruins. But what should we do when something like this happens again in the future? How can we make these countries survive like Nepal? ”Tourism is what saves us, and what is helping us to re-build this city again.” Jyapu continues. He is talking about how tourists together have much more power and money to help the city and the people then the government. 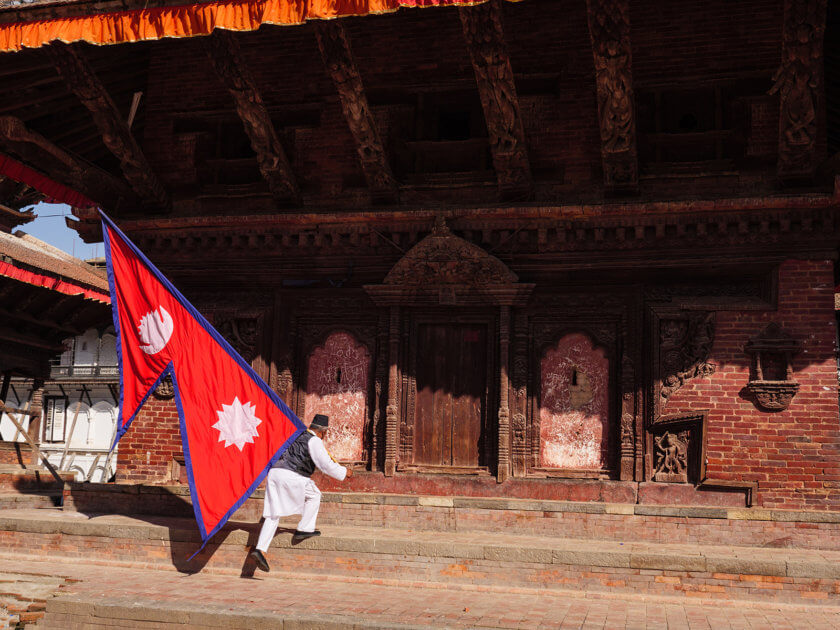 In Kathmandu, many monuments may no longer be there. But the history and people are – and they want you to have the best travel experience ever. Some of the stories have even more impact when you understand the sorrow from a guide trying to explain what a building from the 12th century used to look like, a building that is no longer there for you to see.

My conclusion after seeing Durbar Square and meeting with Jyapu is that the most important thing from our side – those of us who are not affected by the catastrophe and who have money to travel – is just to go there. The sooner the better. It will be sad sometimes, it might even be scary; but it will also be the best way to help. Of course, volunteering is another amazing way to assist in these situations – but if you don’t feel like you are cut out for that, being a tourist is just fine. And finally – paying a guide, or skipping the haggling with your cab driver might be an idea. Such expenses will help a family in Nepal, and it will probably cost less then a beer in Europe.

What do you think about travel as a means to help struggling countries get back on their feet in the aftermath of disaster? Let’s talk about it in the comments!