How to spend 1 Day in New York as a Photographer


What would you do if you had only one day to spend in New York City?

Last year I had the chance to explore a bit of the United States and traveled to eight different states in one month. It’s a lot of traveling, but I like grabbing opportunities whenever I can. New York City has a lot to offer and for a one-day trip, it can seem to be overwhelming. I wanted to find a balance between the hidden treasures I researched as well as seeing some of the city’s famous attraction. Here are my tips for spending 1 day in New York.

First off, you need to figure out how to get around.

It’s easy to get around with by subway, but it takes awhile and you will be underground most of the time which means you will see less of the city. I would say I am quite an adventurous person, so I decided to venture around the city by renting a bike. And I biked a lot.

I didn’t have a lot of experience with biking, except that one time I biked around Melbourne. The traffic in NYC is pretty crazy and you want to be careful as well as brave; yet there are a lot of people biking in NYC.

I took advantage of the Citi Bike Day Pass. It’s $12 per day, free 30 minutes for each ride and they have a lot of bike stations all around the city. I did have data on my phone, so I could always check where the closest available bike station was. I loved that I didn’t have to bring the bike with me when I decided to walk for a little while. For example, I wanted to just cross the Brooklyn Bridge on foot, as that’s what it’s famous for. I simply locked up my city bike, walked across the bridge and got another bike out at the next station. It’s a very good system and makes it easy to explore New York City by bike!

Second, pin out your maps.

In New York, there are a lot of things to see. I usually write down the places that I want to visit and then from there, I can examine my itinerary. Whatever you’re most interested in your 0ne-day itinerary for New York might look different, but I love photography and capturing the iconic places of the Big Apple was my priority. Plan for your stops and always know where you’re going, so you can maximize the day.

Here are some spots that I chose to visit on my day trip to New York.

My first stop was the High Line, which is an elevated park in the middle of Manhattan. It’s quite unique and controversial at the same time. It offers an elevated view of the New York skyscrapers and as photographer, it gave me a new perspective onto the city. I always love going up tall buildings or mostly on the roof of car parks. High Line perfectly provided me with this kind of view.

I stopped at Dumbo to take photos of the Empire State Building, which just fits underneath the Manhattan Bridge – what an iconic shot! It can be hard to find this spot, but with a little bit of research I nailed it. It’s by Washington Street and Water Street.

Brooklyn is a very trendy area, kind of like the ‘new’ Manhattan. Young people love Brooklyn and the hipsters are thriving with their creativity here. I stayed for a while in Brooklyn to see the sunset behind the tall buildings of New York as well as capturing the city lights at night.

Finally, I walked back to lower Manhattan across the Brooklyn Bridge to get the blasting lights of traffic and the city building. This is a landmark that you must not miss.

One more tip: get the right meals.

In New York it’s easy to find the foods you love in a place near to you. There is tons of good food in NYC and people line up outside restaurants when they’re particularly famous. If you’ve ever heard about the $2 New York Pizza, it’s worth a try.

Grimaldi’s Pizzeria is a famous place that is always crowded, but I didn’t have that much time to wait in the line. Instead I chose a random pizza shop around Lower Manhattan.

Finally, say yes to the spontaneous!

Traveling across the world, this might have been my only experience of NYC, even though I hope that’s not the case! I wanted to make the most of it. I was up late and got up early to embrace it all. Even though it was more of an accident (because I got lost), I experienced Times Square at 11 pm on a Saturday night – and it’s insane! But when is Times Square ever not driving us nuts? The bright LED screens filled up this square; the constant honking from the taxis and the sounds from the advertisement; all on top of the masses of people who are out and about – it’s a place like no other. At that moment I realised that this is the city that never sleeps!

For me, New York became a place where dreams come true. I never thought I was going to visit this concrete jungle, but the loud noises outside my window weirdly gave me the energy to pursue my dream. Photography in New York City is all about capturing the icons, even when they’re everything but hidden secrets. There is a reason why photographers love this city – and I am now one of them! 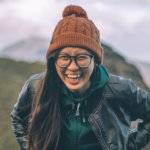 Tirza started traveling the world when she was 3 years old as her family moved to Hong Kong from Jakarta, but Perth is now her home. She picked up a camera for the first time in 2014. Since then, she has learned that the camera is a tool to see more, tell more, and to get perspective. Follow her photo journey on or her instagram .