This modern retreat surrounded by forest is situated near Poznan, Poland. It was designed in 2017 by Studio de.materia. 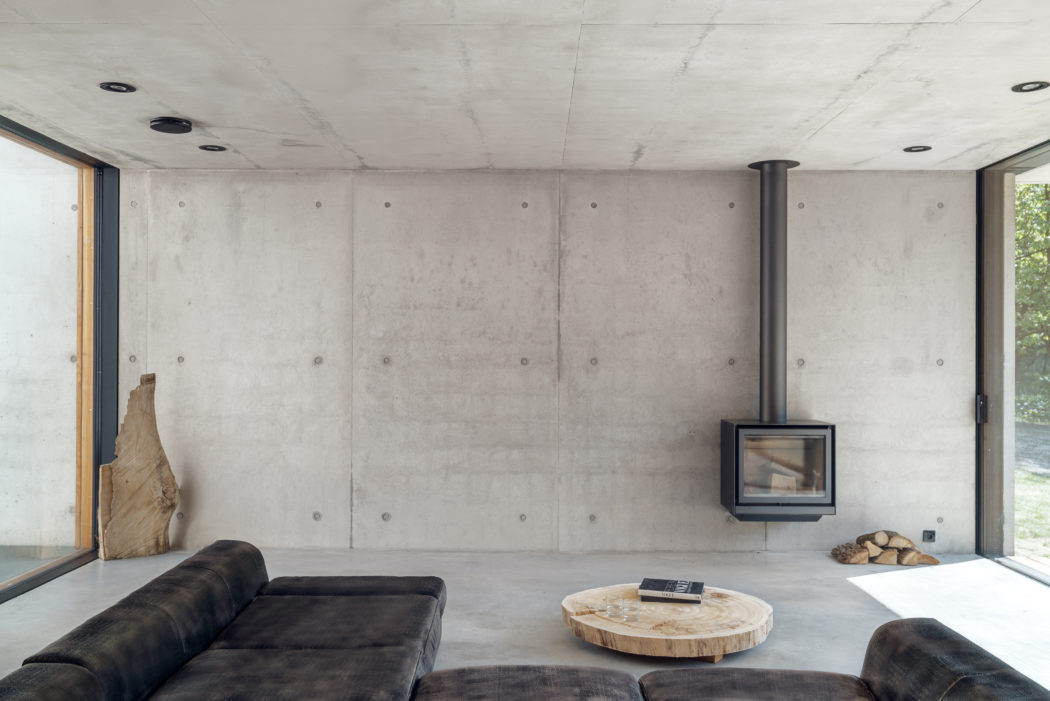 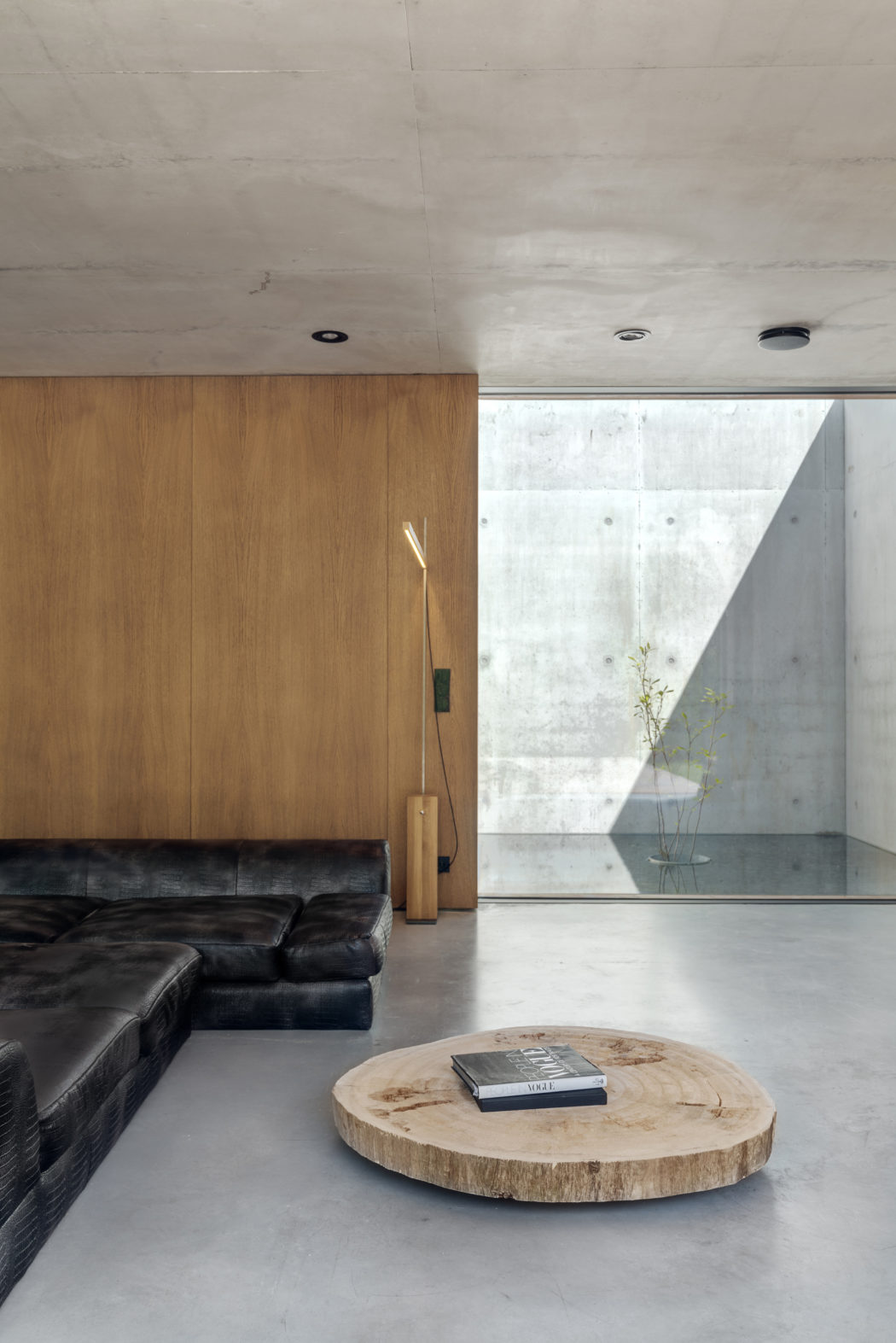 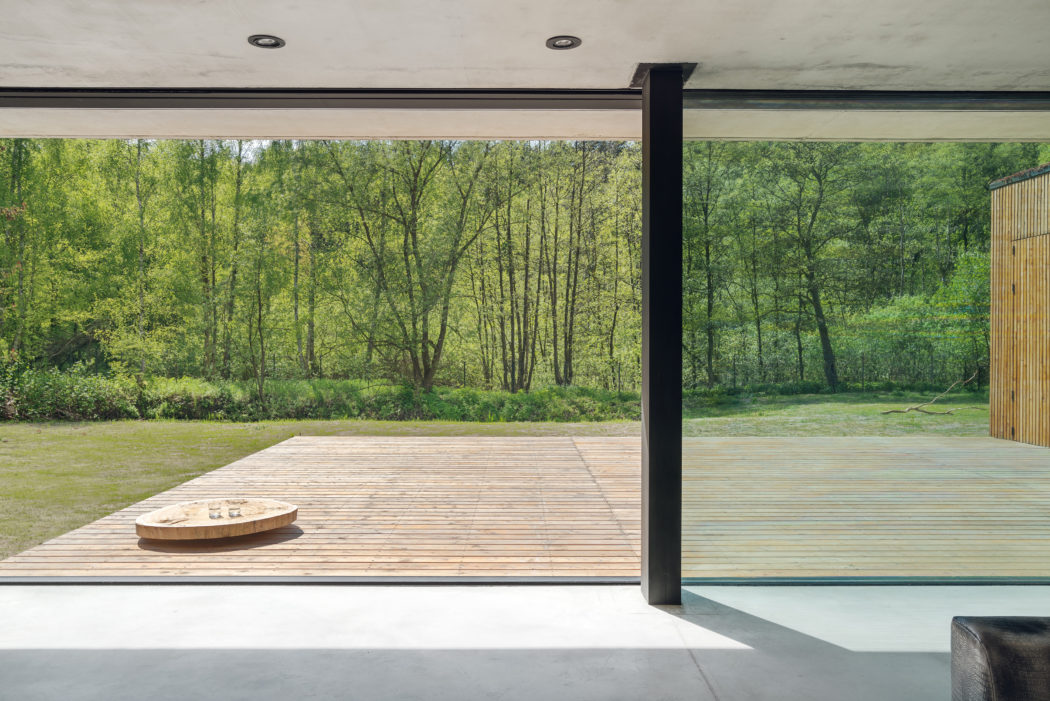 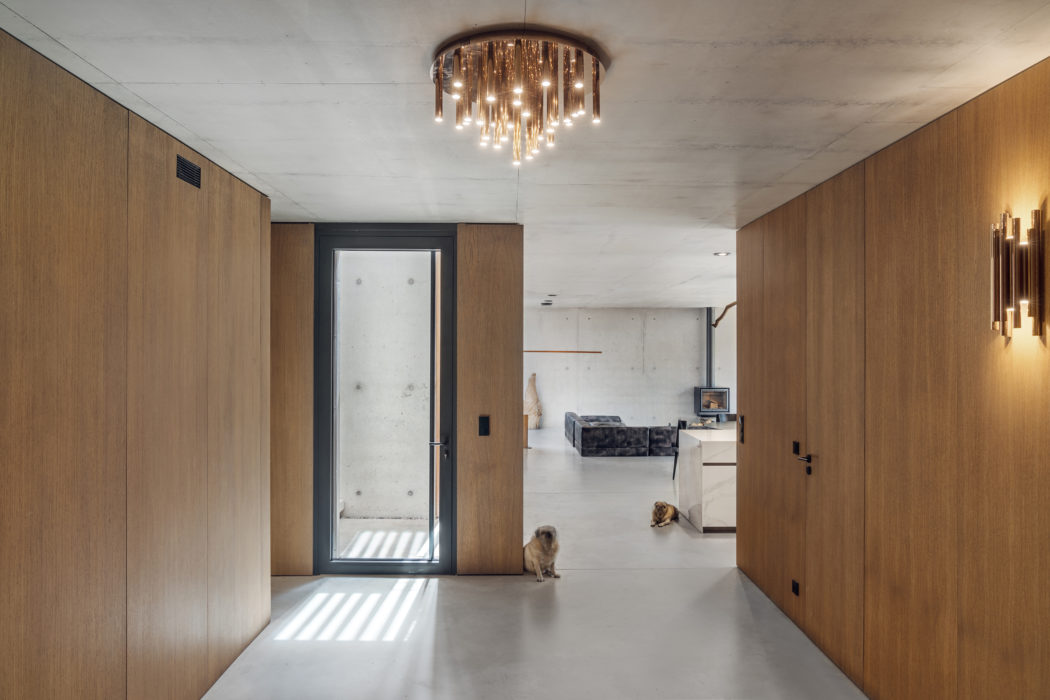 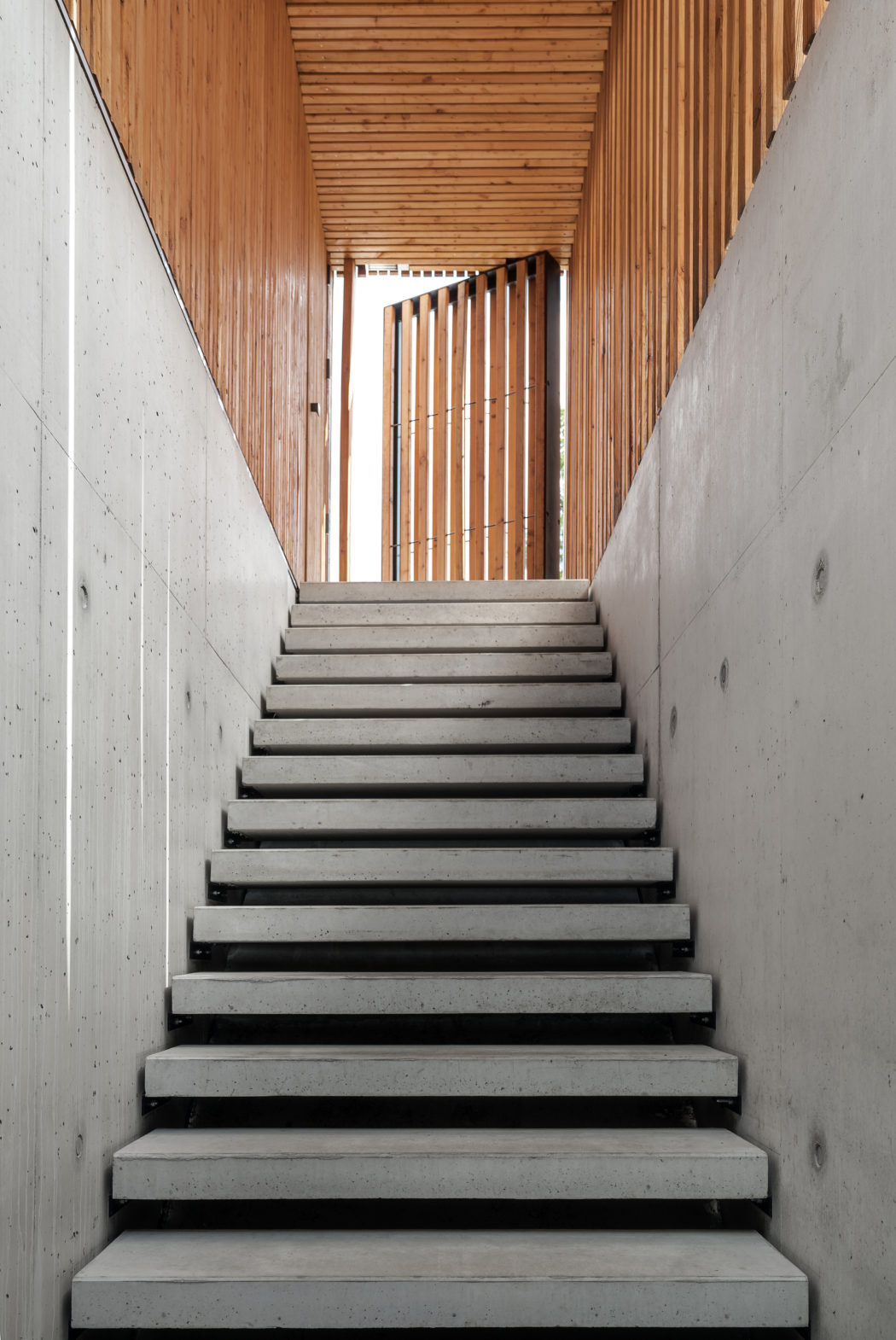 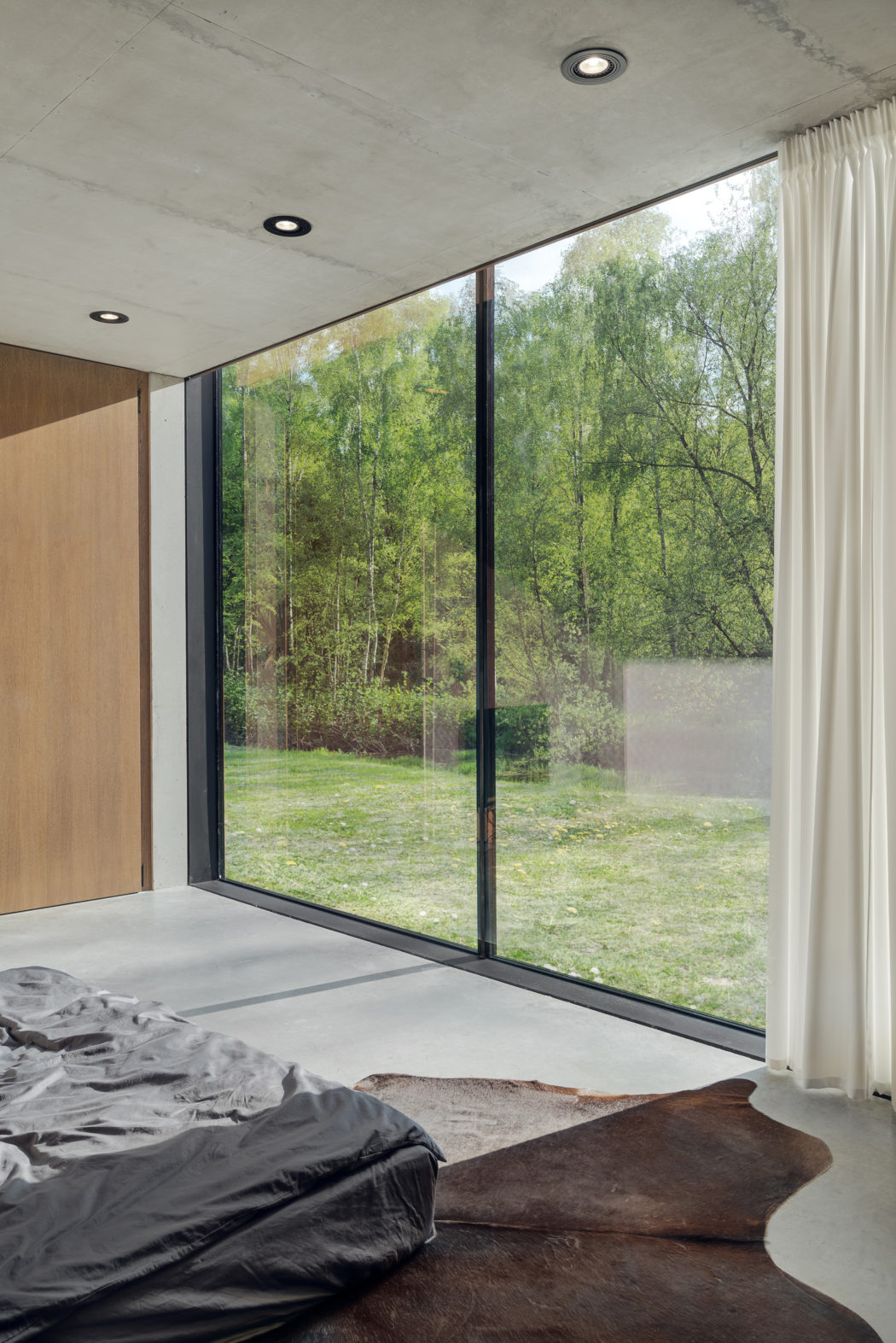 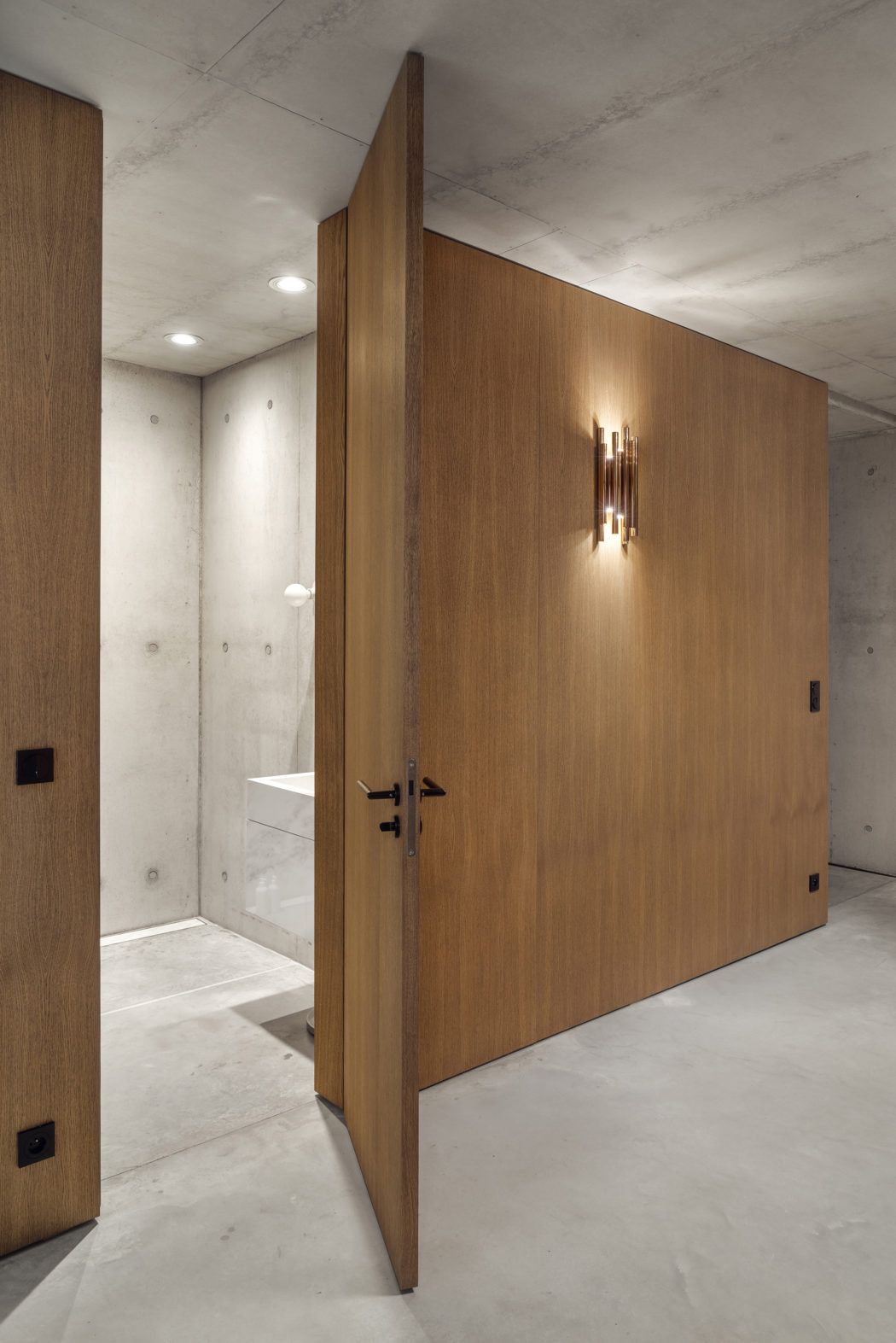 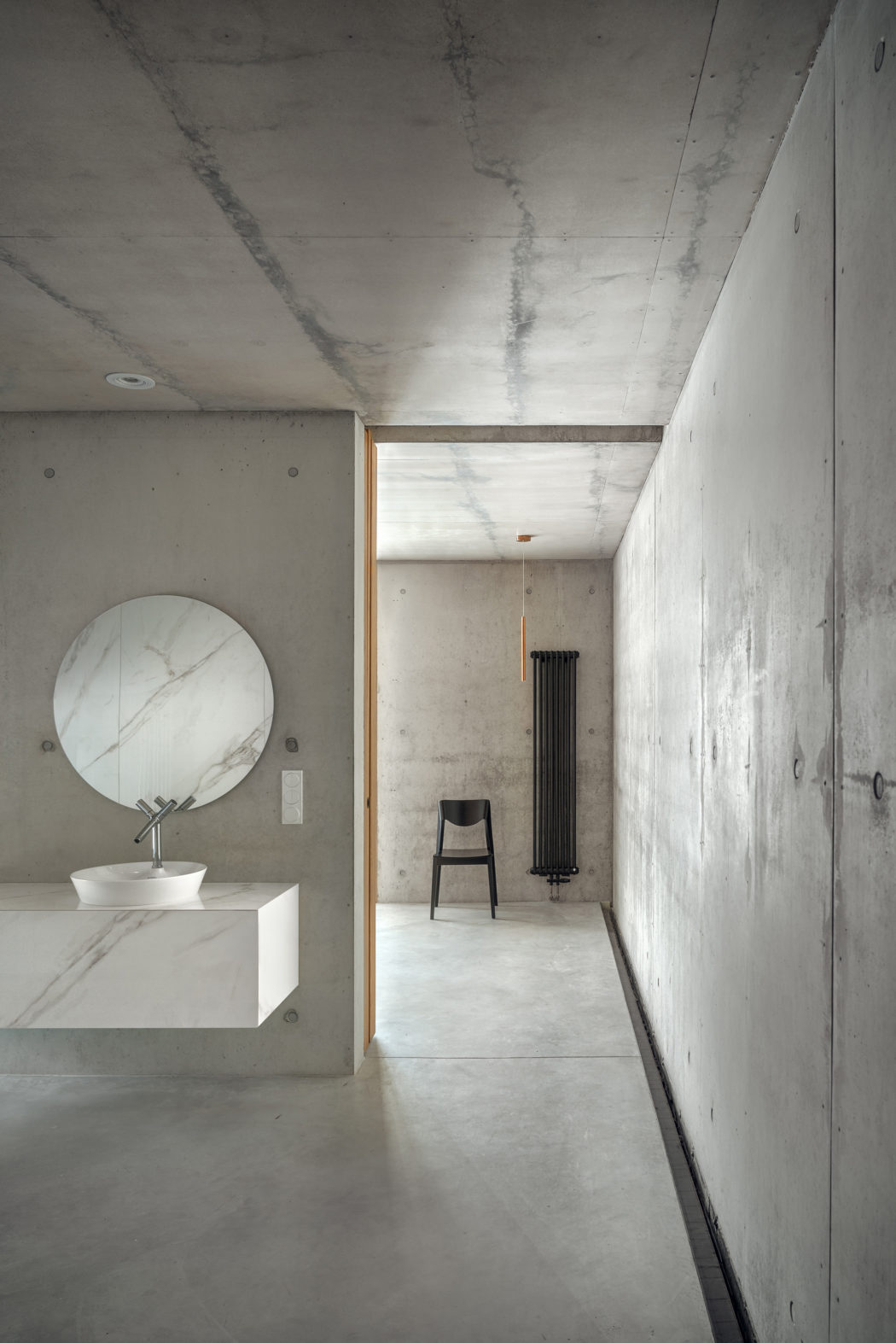 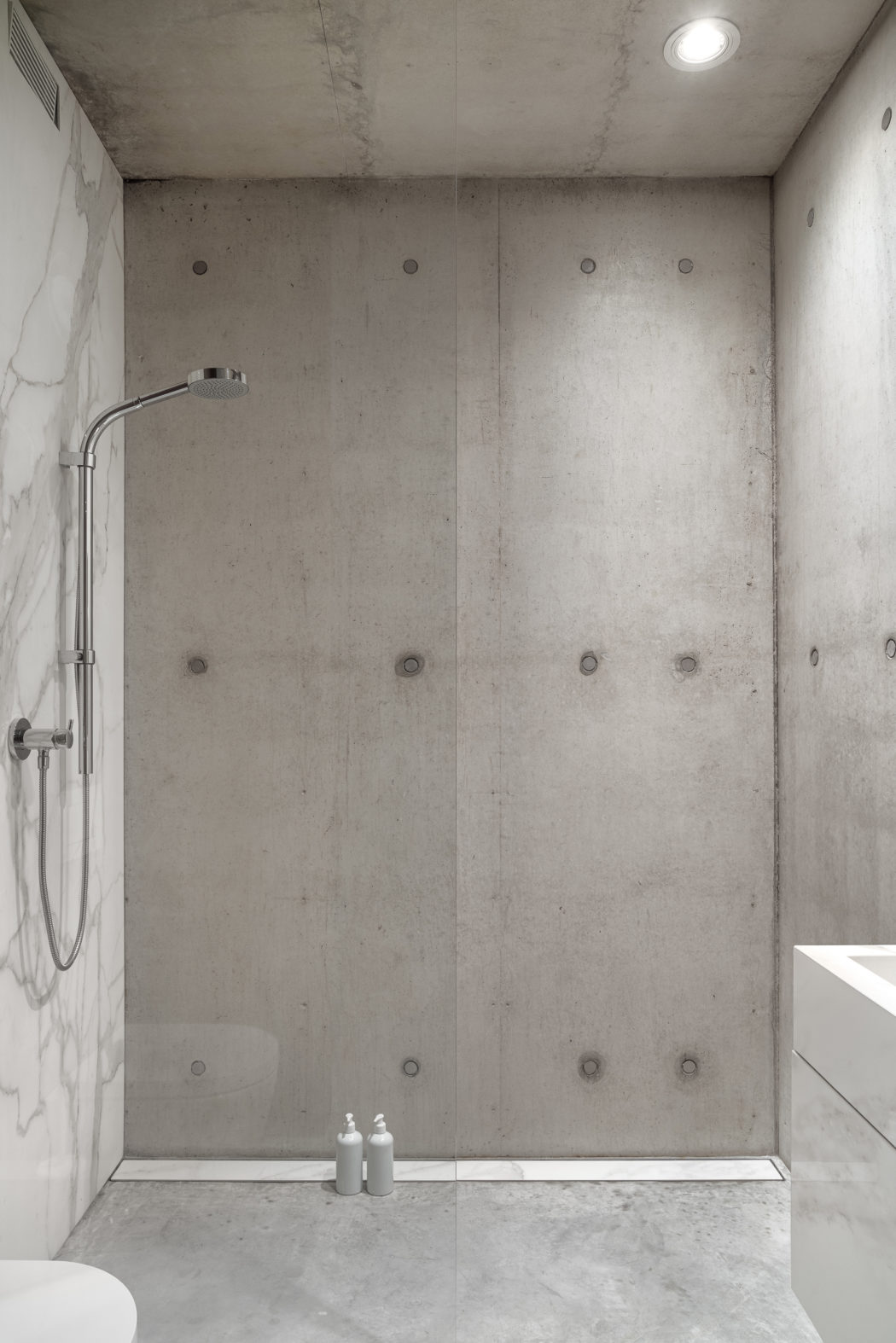 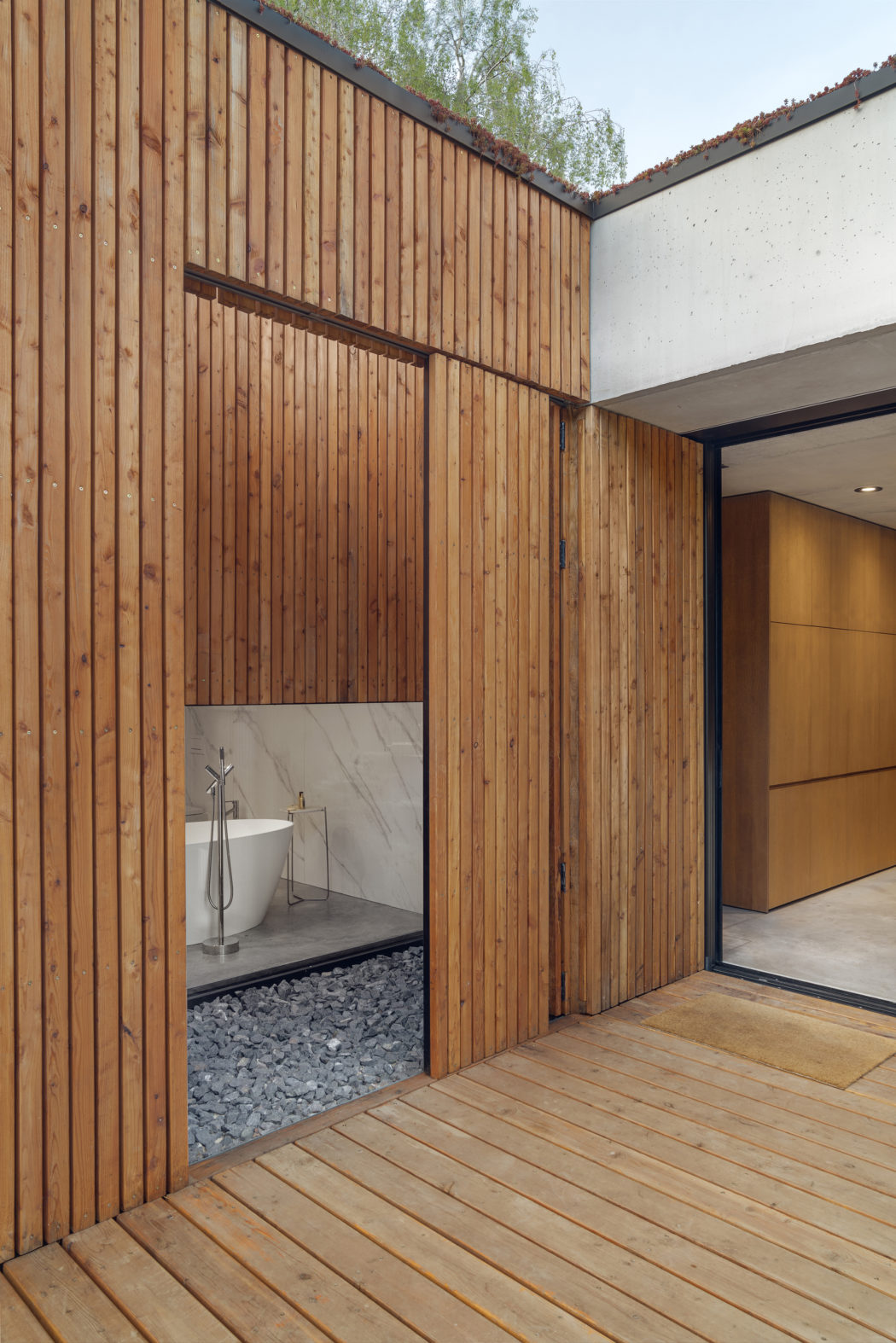 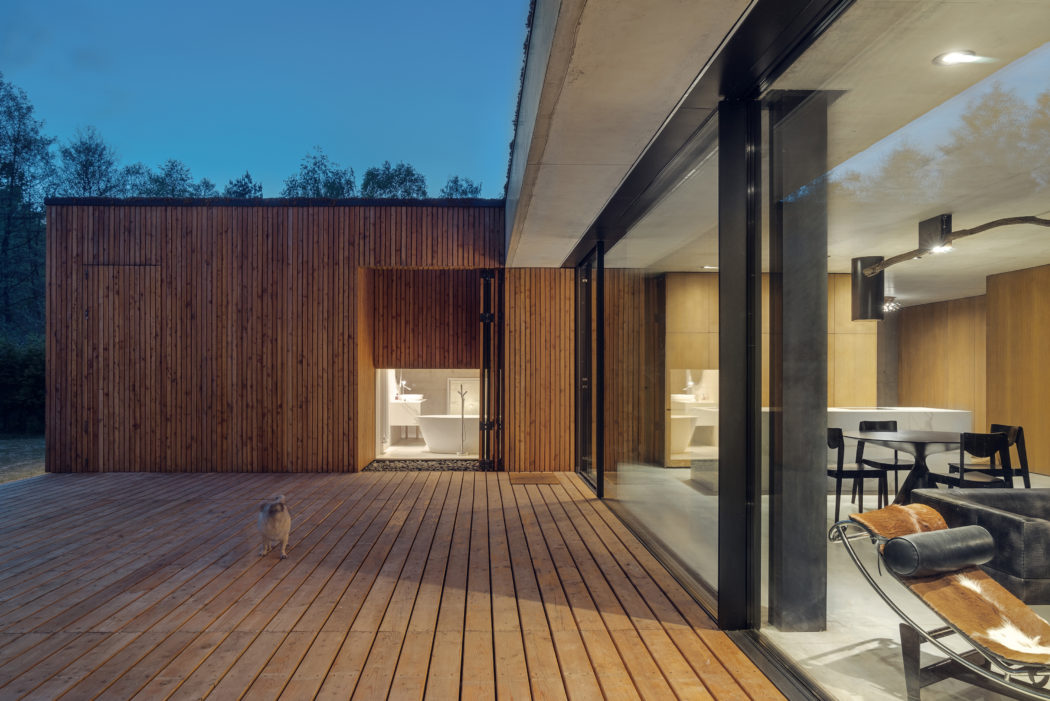 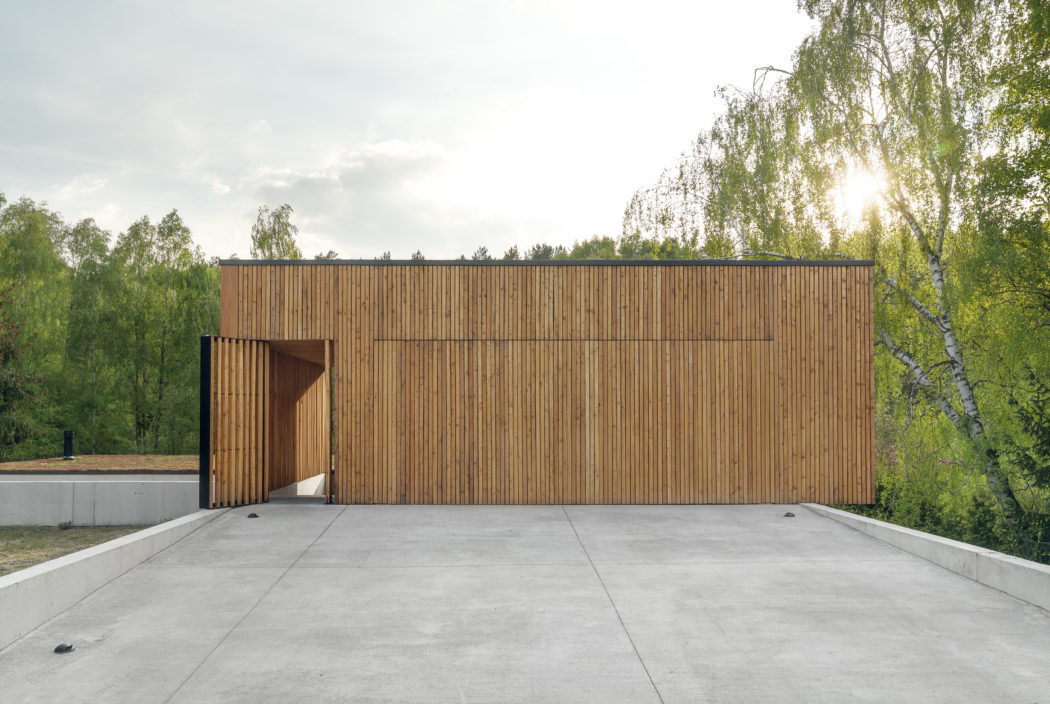 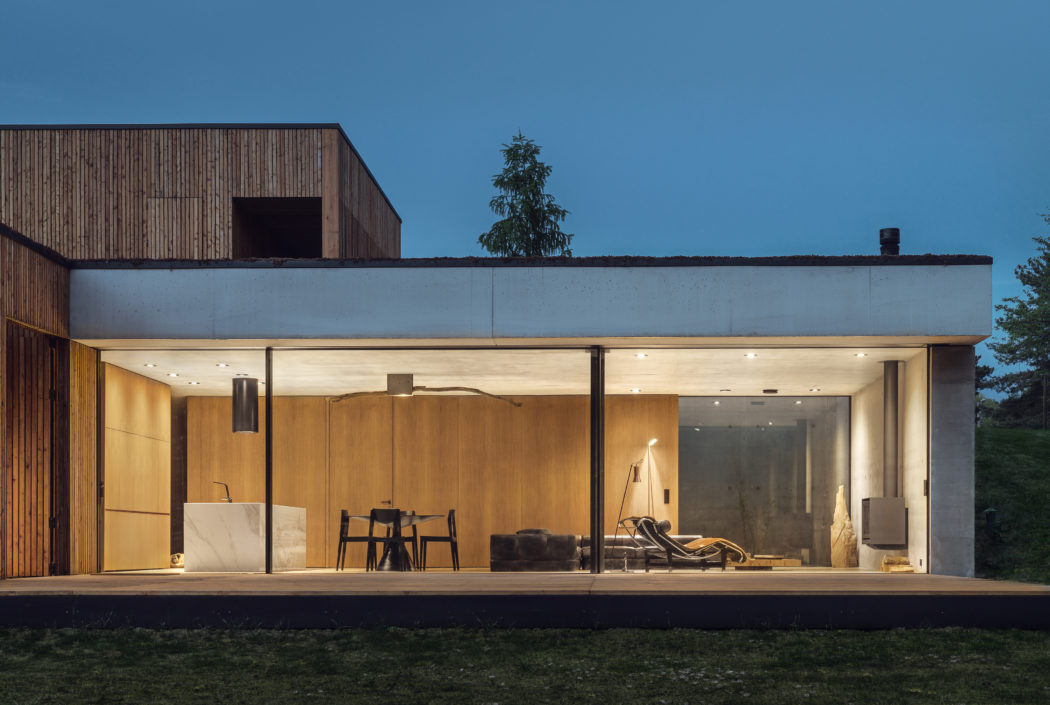 The plot is located on the edge of the Żurawiniec Reserve in Poznan.On the west and south side it is Surrounded by a forest. Along the front, east boundary of the plot runs through the embankment, which gently descends down the plot towards the reserve. Such terrain has determined the basic assumption of the project. The basic idea was to hide the house from the street side and open it up to the reserve as much as possible. The living space was supposed to be a one-storey solid sloping into a natural hill, and the garage, to avoid embarrassing downhill, was to rise on the upper storey, on the roof of the building.

The functional layout of the home was dictated by the sun, views and neighbourhood. The layout of the partially underground living space resembles the letter T. One wing contains a living area with a living room, a dining room and a kitchen, open to the west; The second is a sequentially ordered sequence of rooms:

A dressing room, a bathroom and a bedroom that goes out toward the green. Part of the building that slammed into the slope, contains a guest room and a blind technical room. At the intersection of two wings, there is a communication space and a main entrance. Such placement of the function allowed a natural separation from the neighbor from the north. In order to obtain the effect of the natural submergence of the building in the slope, it was necessary to first demolish the escarpment, next make retaining walls to form a barrier for Ground pressing and then restore its original shape. At the same time the main retaining wall was separated from the proper building so that a patio with a window illuminating the salon from the east , was created. All the walls of the residential part were made in the technology of exposed concrete (three-layer sandwich wall: concrete-insulation-concrete). First, the load-bearing walls were created, then clad layer of thermal insulation was added, which also constitute a kind of formwork for the next layer of concrete. At the last stage poured concrete facade in SCC technology (self-compacting concrete). To get high quality concrete walls, no system formwork was used, but all formwork were made with furniture precision directly on the construction site. The construction of the garage is a lightweight wooden frame with larch facade.

The roof is covered with extensive vegetation of herbs and stonecrops. Facades complement larch wood. Oak lining was used in the interiors. The house is equipped with mechanical ventilation with heat recovery and efficient underfloor heating with massive concrete slab floor.