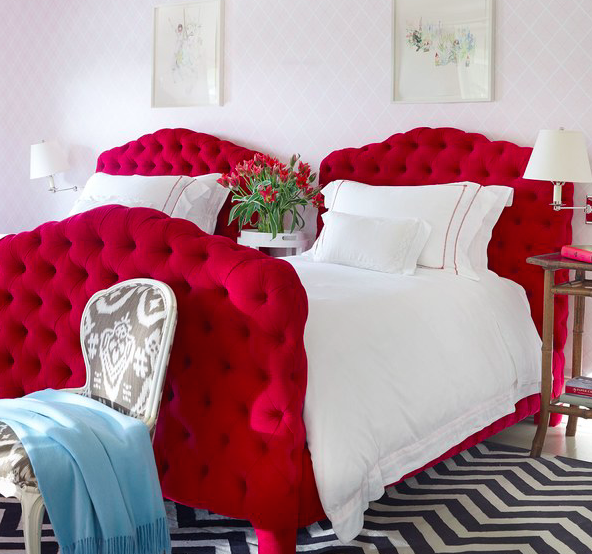 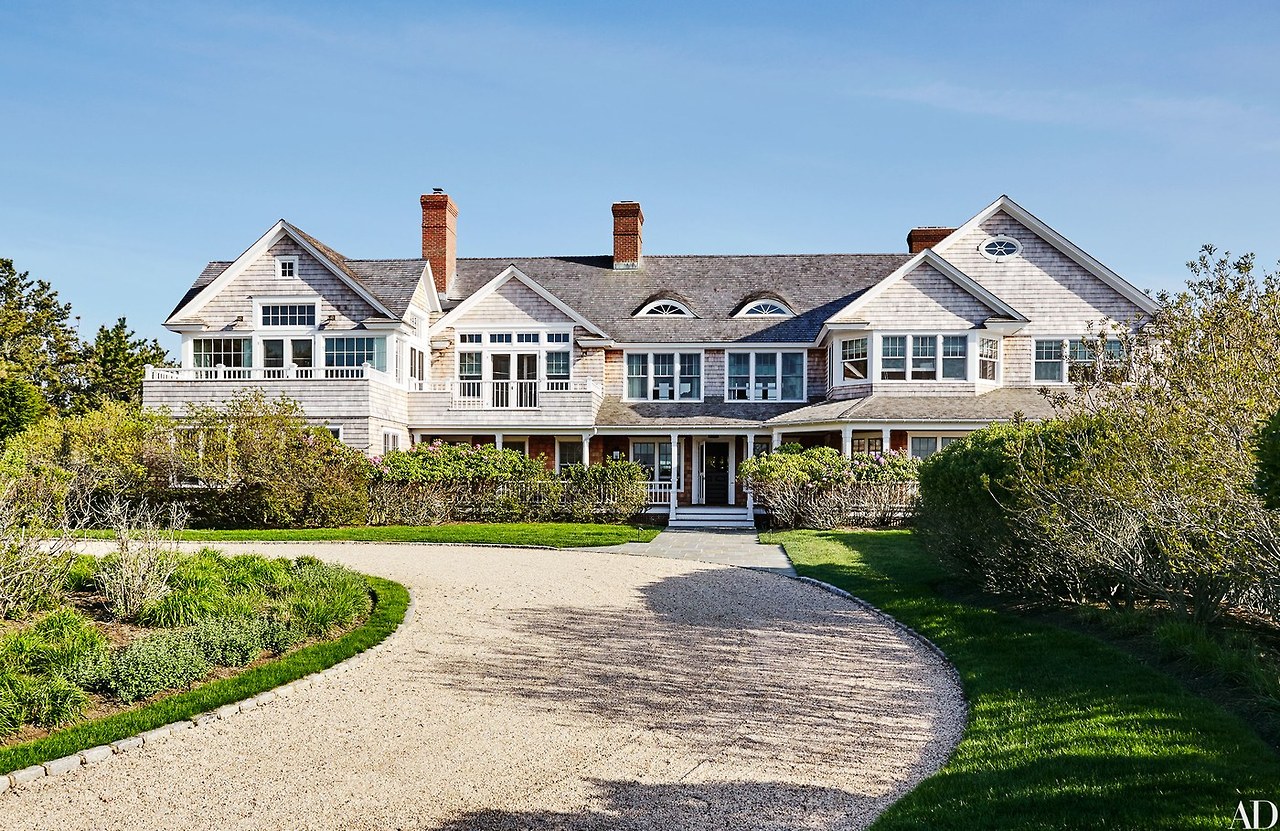 Interior designer  and architect  tame a too-big beach retreat for a young family.
The house was built in the 1980s. 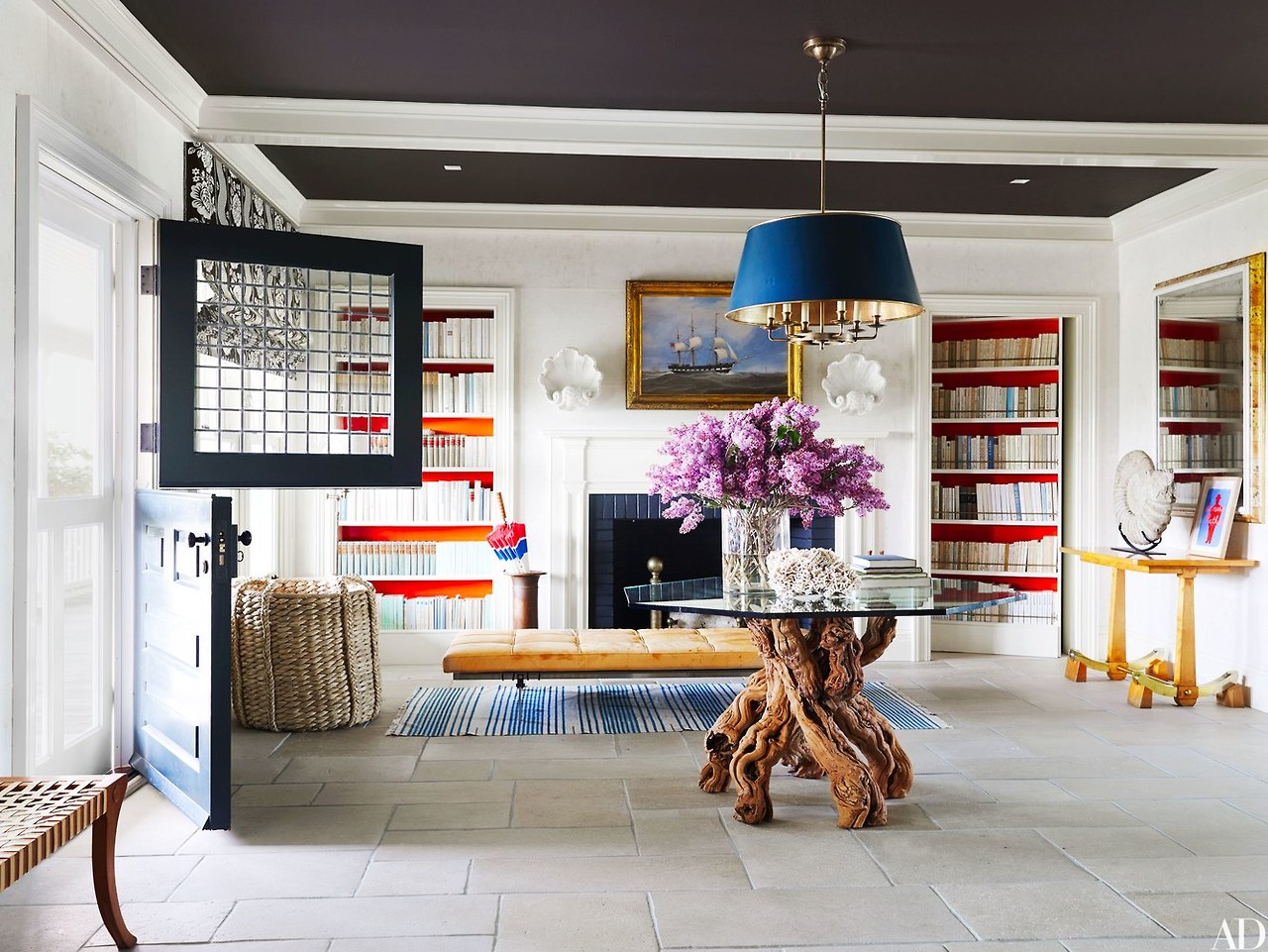 A rush basket from Mecox sits beside the door in the entry hall, which is crowned by a Charles Edwards pendant light. A Poul Kjærholm daybed stretches out in front of the fireplace, and the midcentury French shell sconces are from JF Chen. 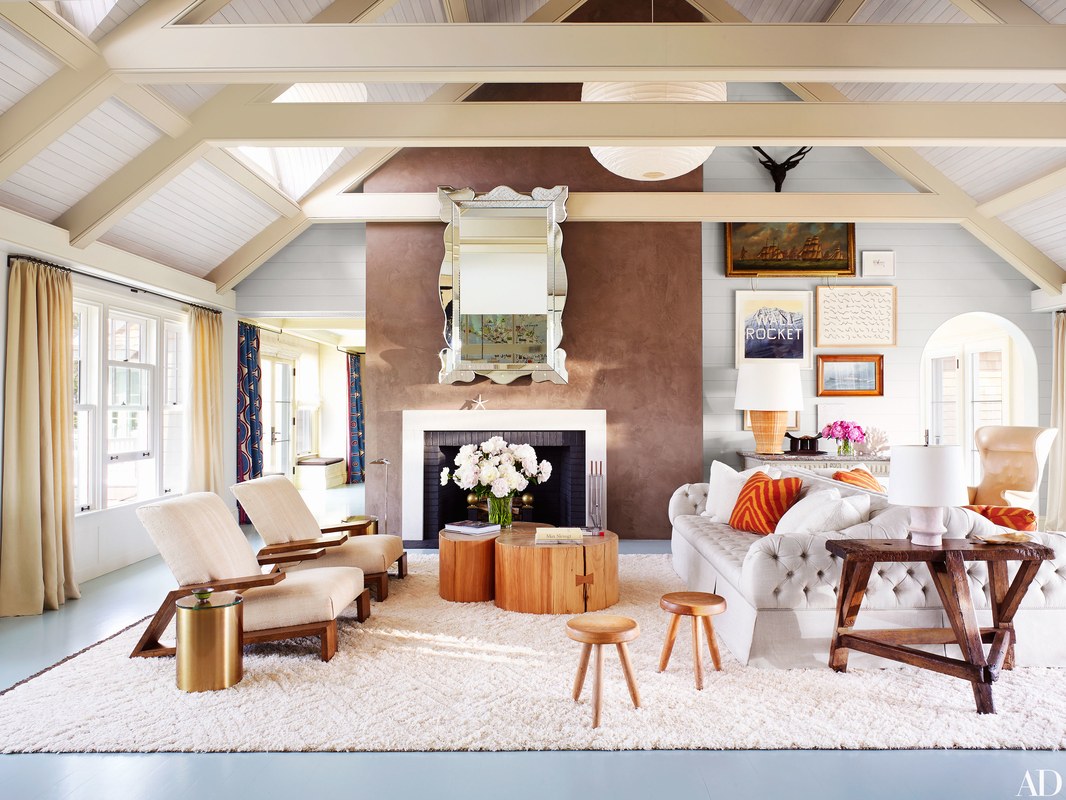 Interior designer David Netto teamed with architect David Hottenroth of Hottenroth + Joseph Architects to reimagine a sprawling Shingle Style home in Southampton, New York. Set on a rug by Beauvais Carpets in the living room are a pair of vintage Jean-Michel Frank armchairs, kidney-shaped cocktail tables by Mimi London, and a bespoke double-sided sofa upholstered in a Clarence House linen; the bright cushions are of a silk ikat by Jim Thompson. 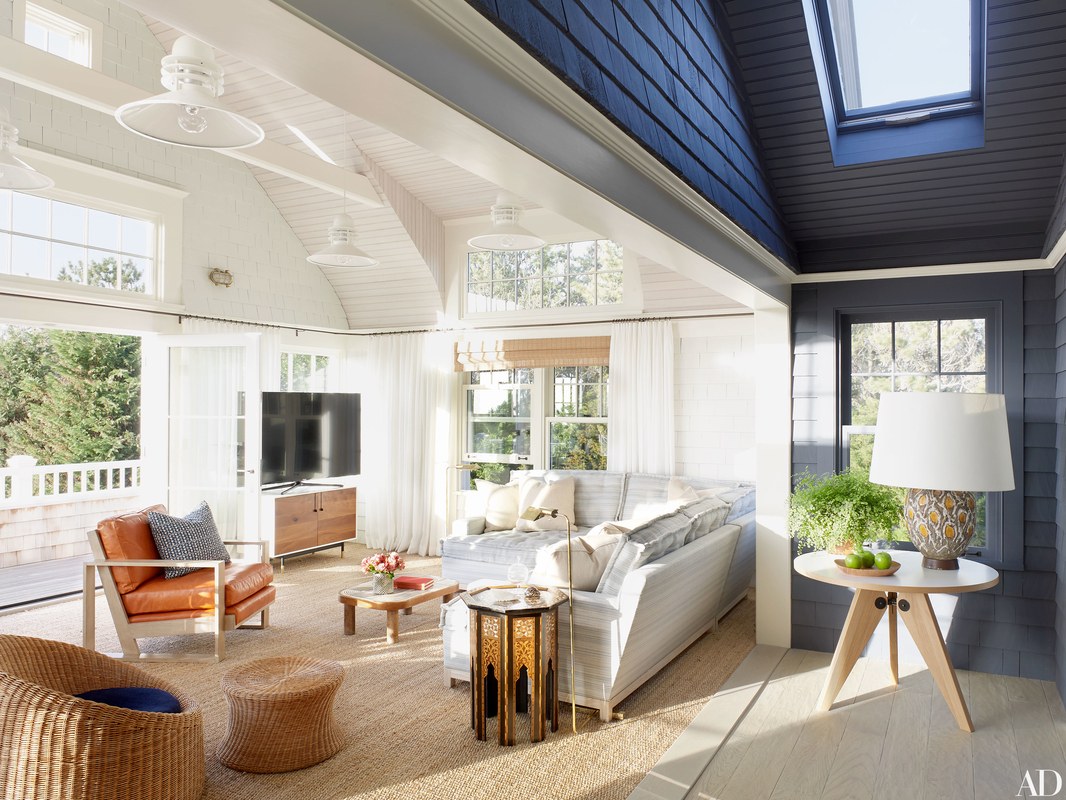 A jute carpet sets a breezy tone for the family room. 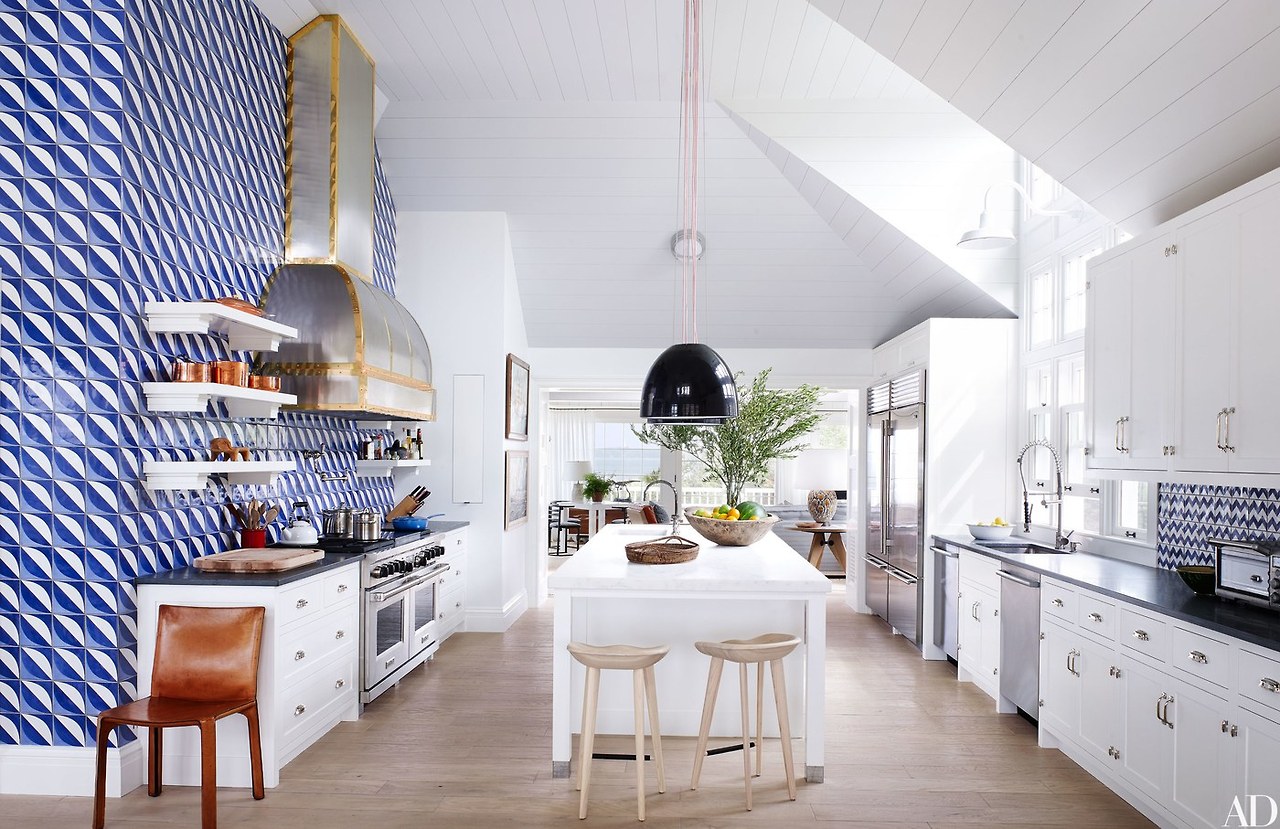 Tiles custom made by Tile Guild based on Gio Ponti designs animate the kitchen, which is appointed with pendant lights by Schoolhouse Electric & Supply Co., a hood custom made by RangeCraft, a Sub- Zero refrigerator, a Wolf range, and a pair of BassamFellows tractor stools from Design Within Reach. 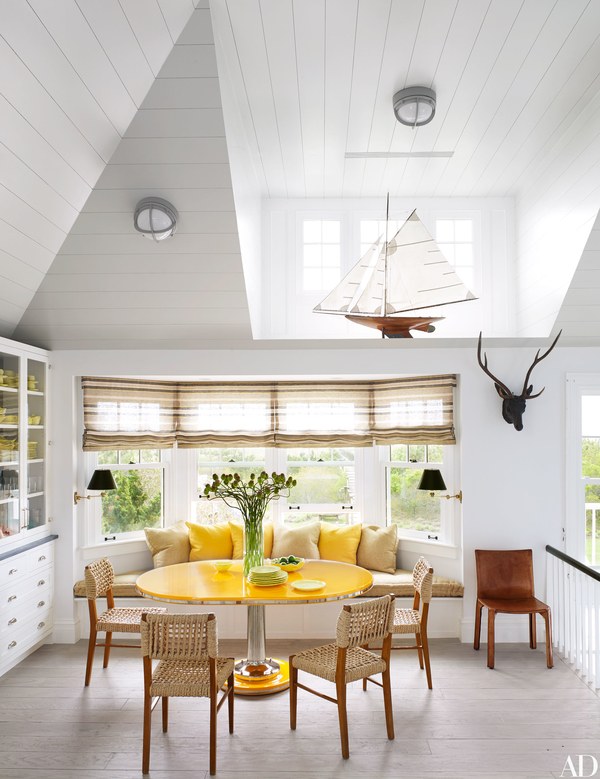 In the breakfast area, a set of mahogany-and-rattan chairs purchased at Christie’s joins a yacht table by Soane Britain. 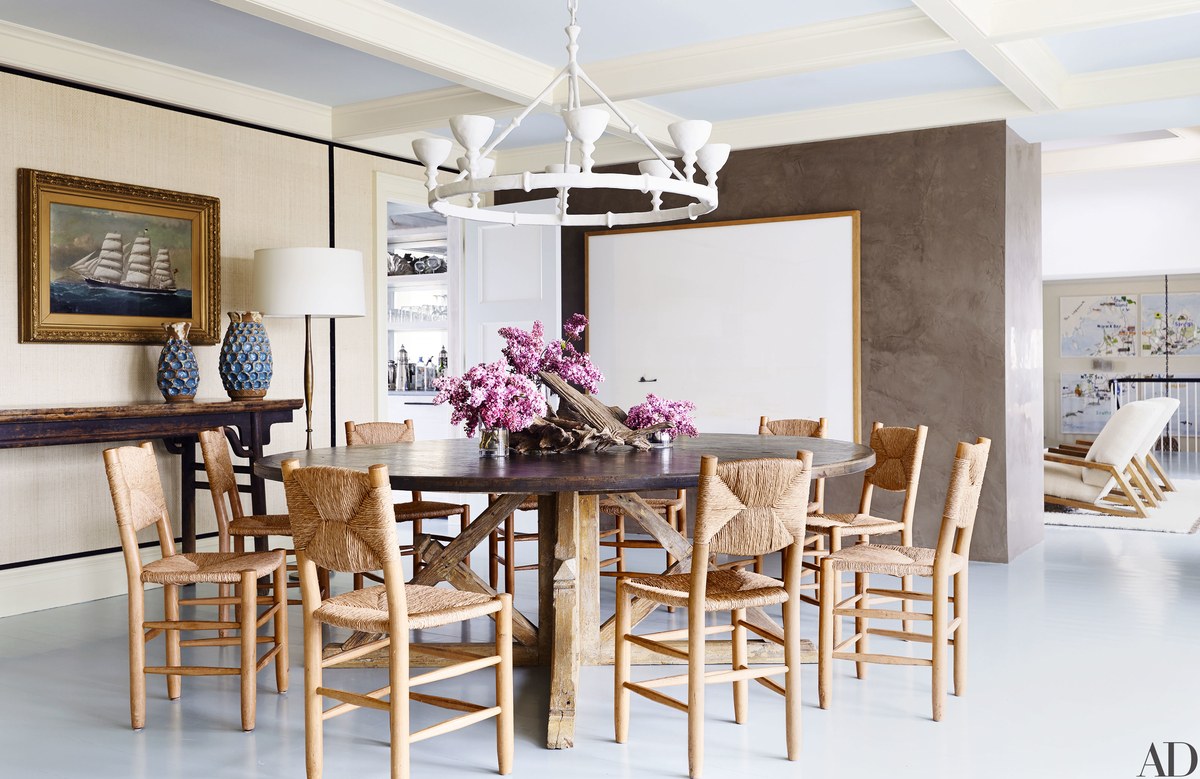 In the dining room, a Stephen Antonson chandelier hangs above a vintage truss table from JF Chen. The Charlotte Perriand rush-seat chairs were bought at auction in Europe, the floor lamp is by Carole Gratale, and the wall abutting the living room was finished in Venetian plaster by Christopher Butler. 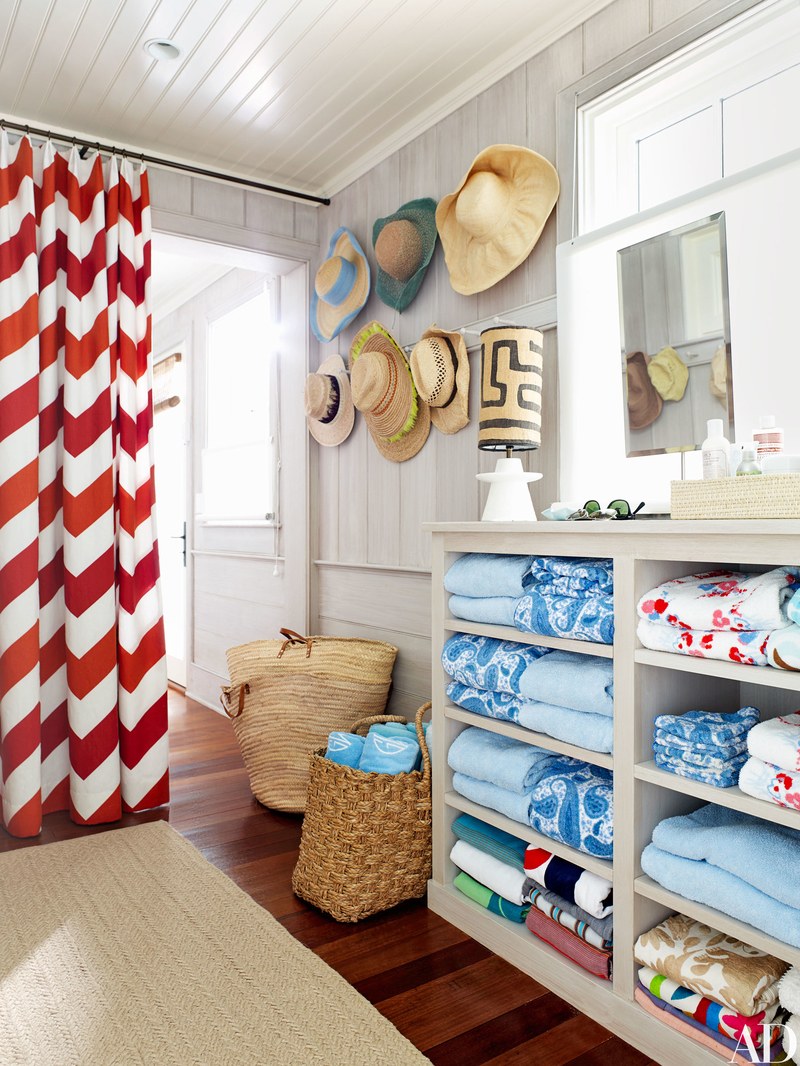 A curtain made of a Schumacher chevron stripe provides privacy in the pool cabana’s changing room; the table lamp is by Waldo’s Designs, and the carpet was custom made by Beauvais. 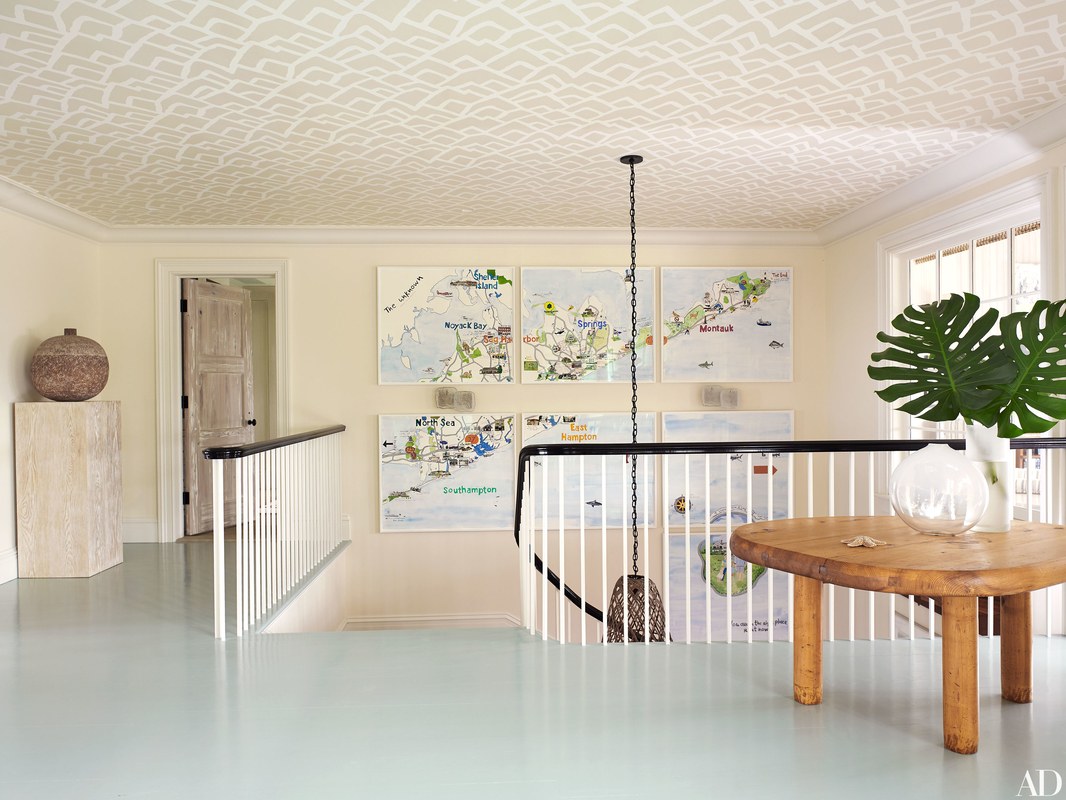 A commissioned artwork by Konstantin Kakanias graces the stairway. 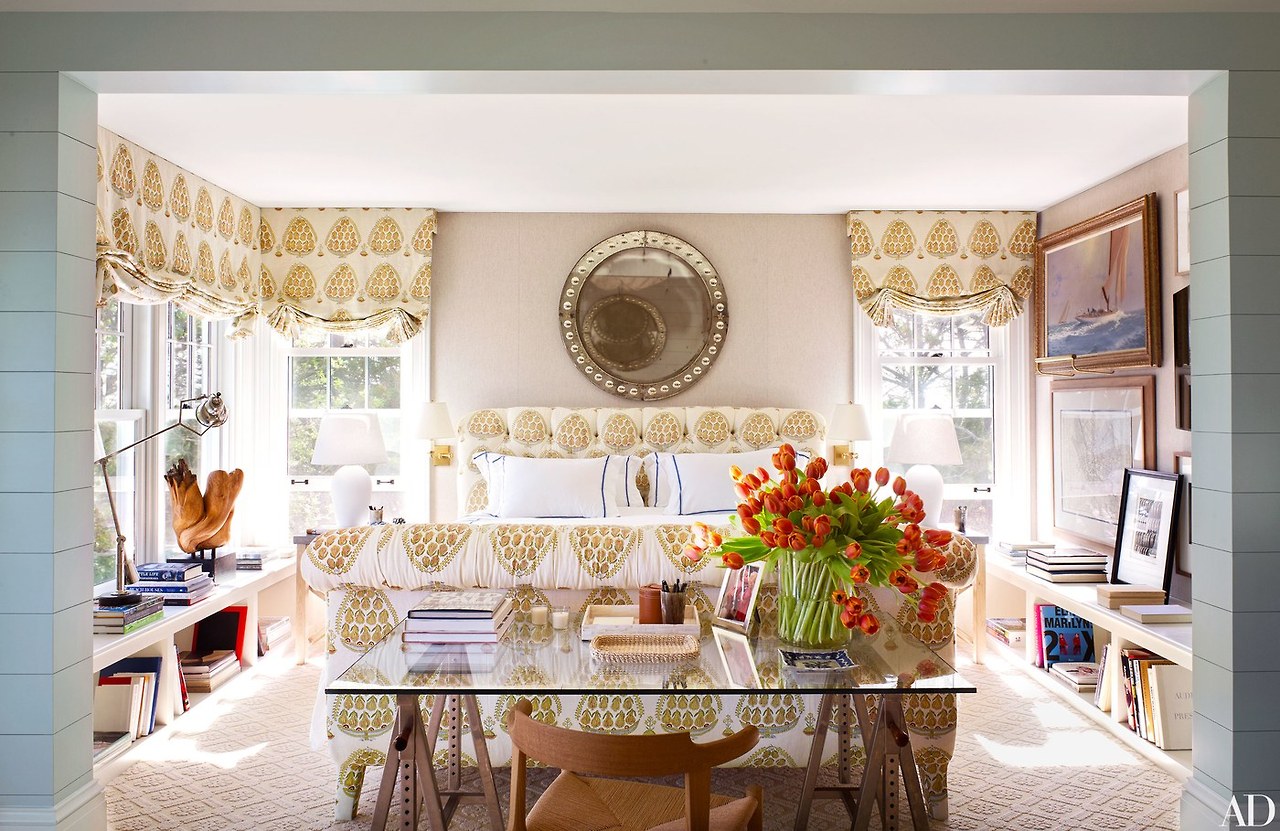 The custom-made sleigh bed in the master bedroom features the same Raoul Textiles linen as the Roman shade; the Venetian-style mirror is from Naga Antiques. 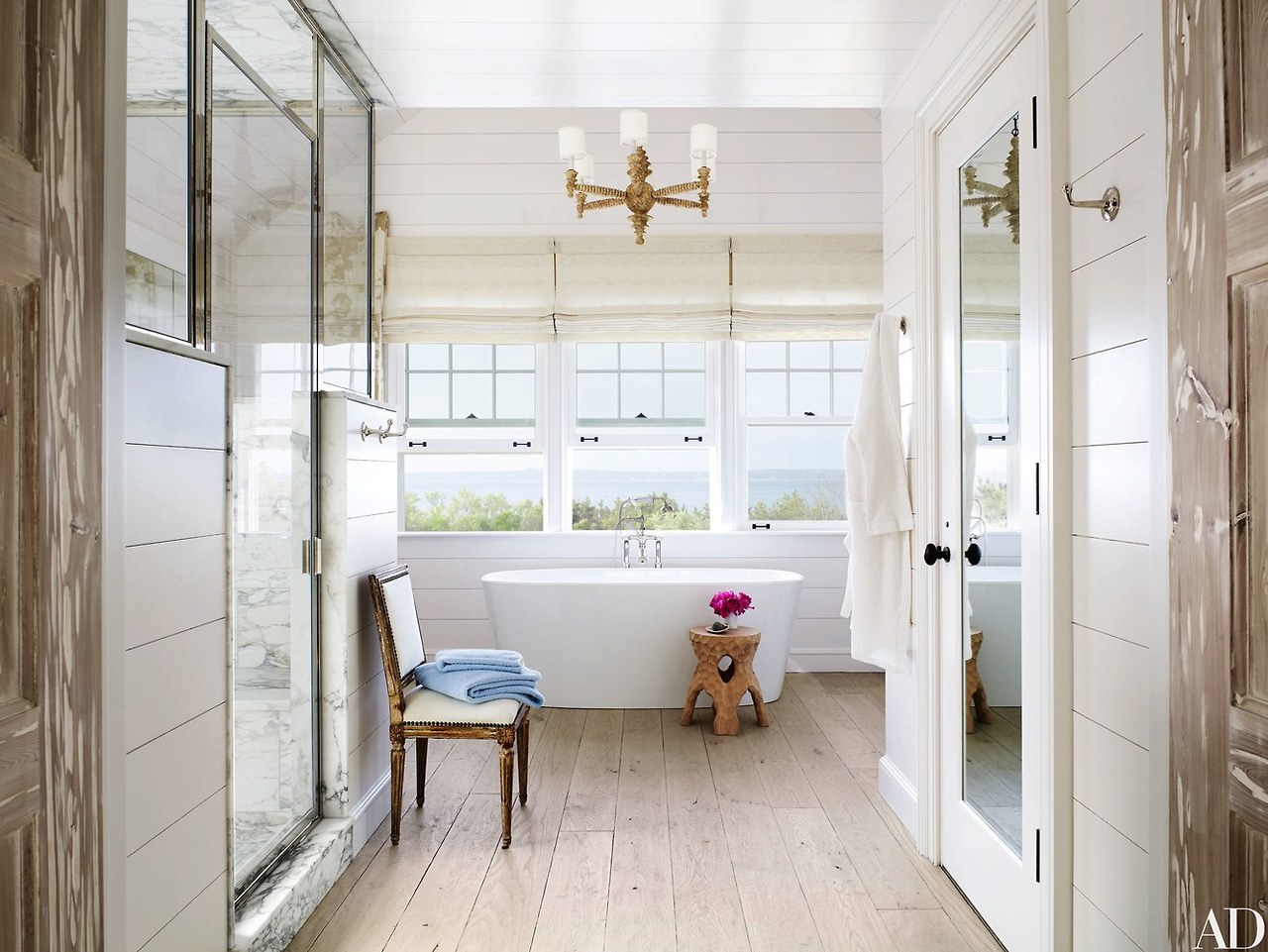 The master bath has a Wetstyle tub with Waterworks fittings, a Paul Marra spool chandelier, Roman shades of a Larsen linen blend, and a chair from Cove Landing. 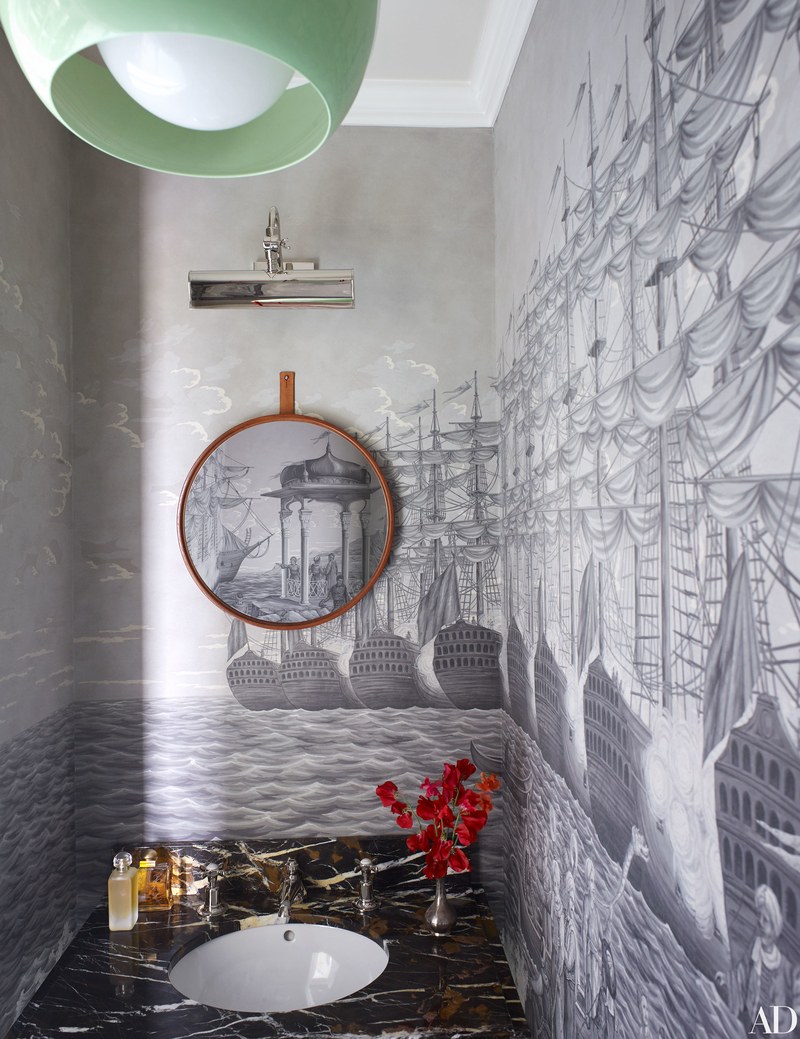 The wallpaper in a powder room extends the nautical theme prevalent throughout the home. 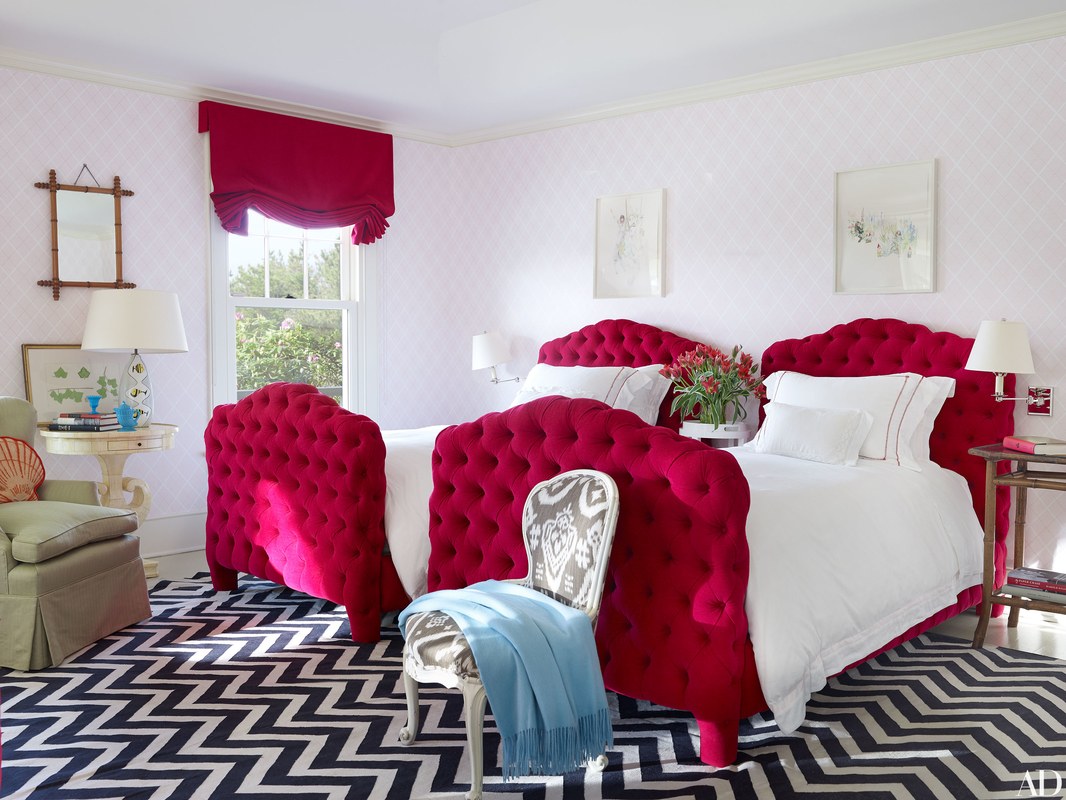 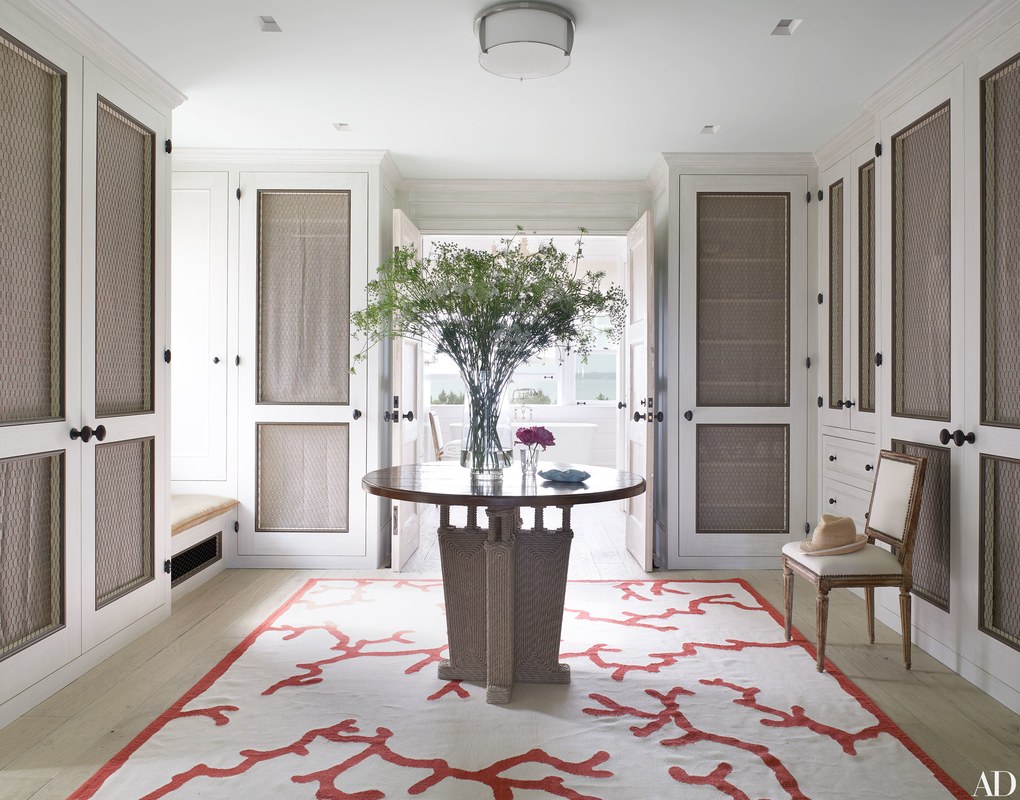 A coral-pattern carpet adds a jolt of color to the neutral-hued master dressing room. 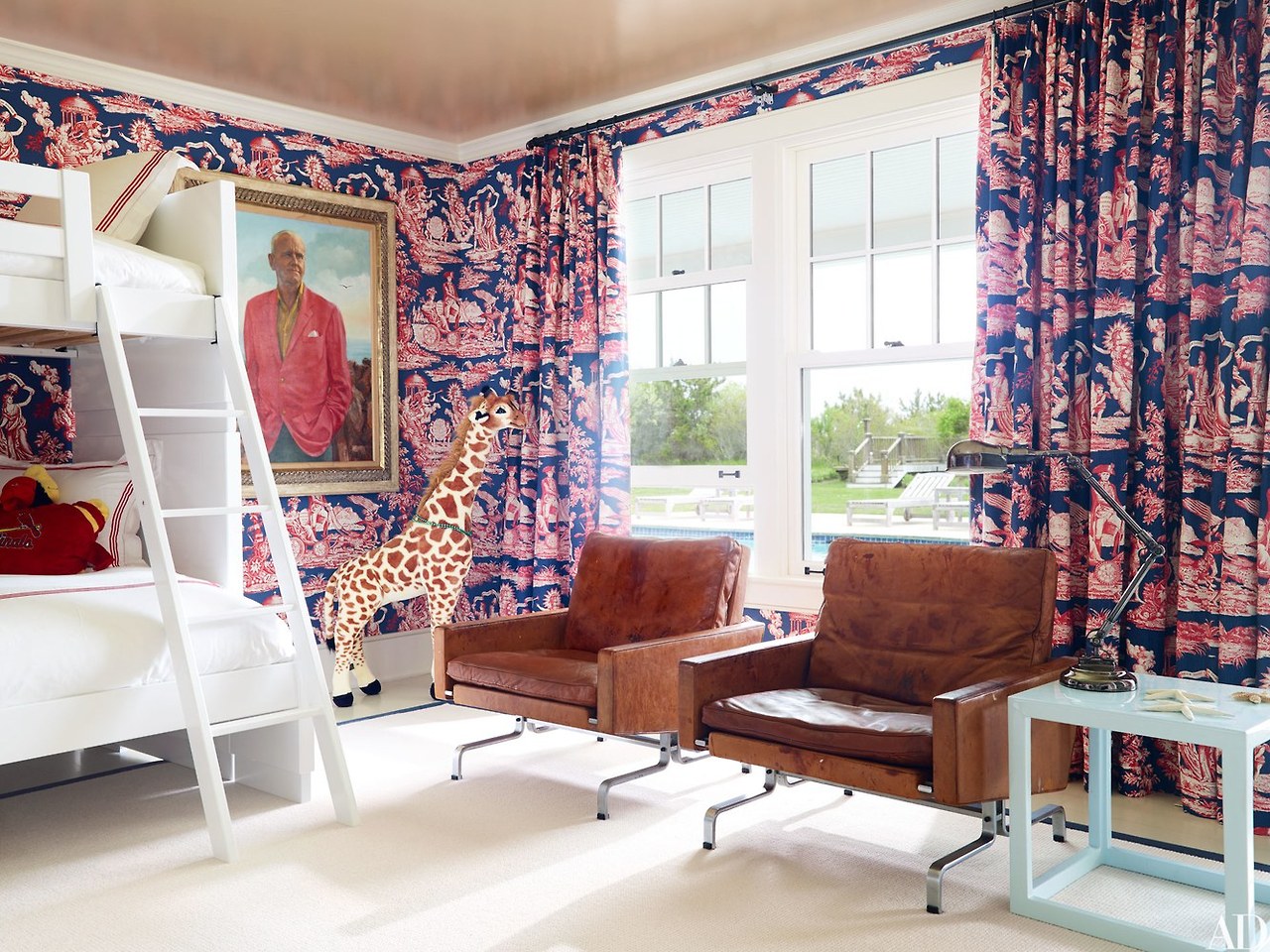 A Quadrille toile fabric and wallpaper envelop one of the children’s rooms. The furnishings include a Room & Board bunk bed, vintage Poul Kjærholm armchairs from Dansk Møbelkunst Gallery, and a Stark carpet; the portrait is of one of the homeowners’ grandfathers. 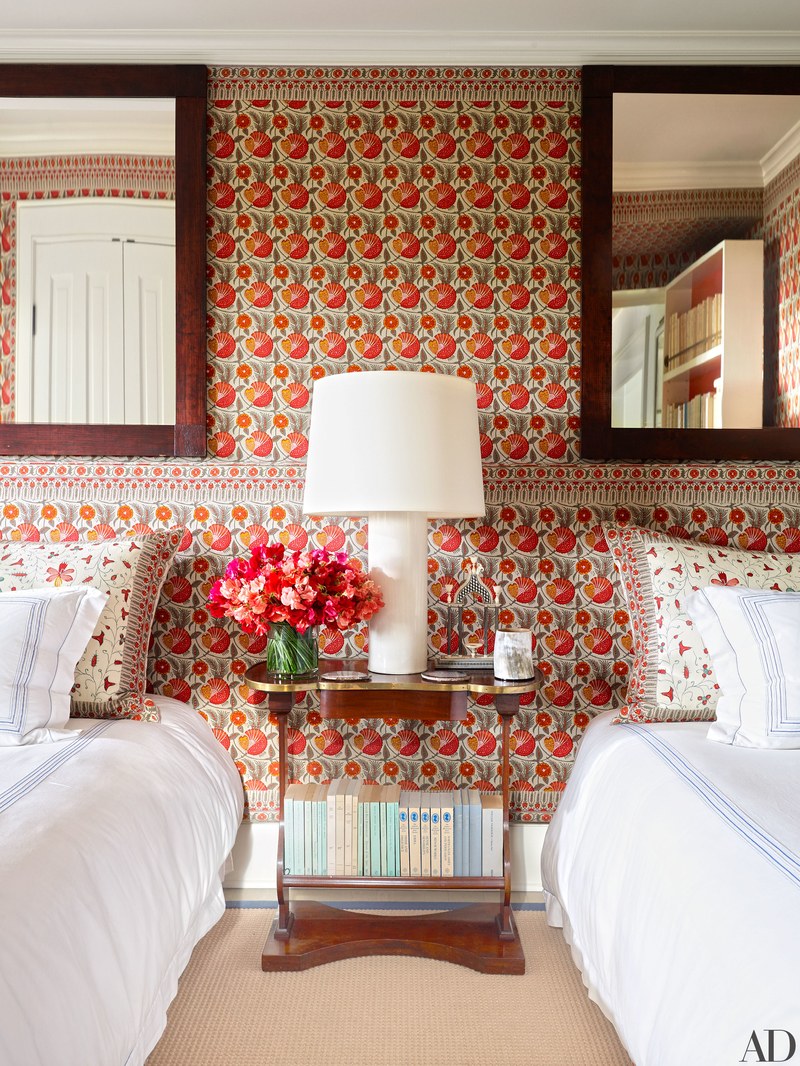 In a guest room, the Le Manach cotton on the walls and headboard and Rosa Bernal Collection fabric used for the pillow shams are both from Claremont; a Rose Tarlow Melrose House table lamp perches on a mahogany nightstand from Sutter Antiques.
via: architectural digest