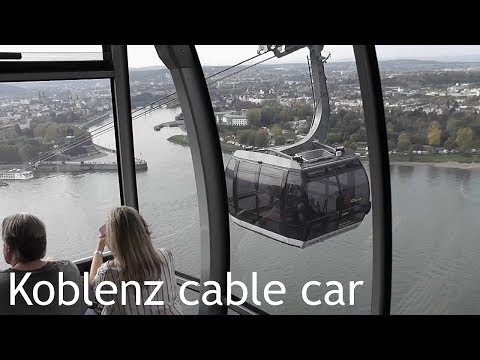 The Koblenz cable car (German: Seilbahn Koblenz) is an aerial lift that was opened in 2010 in Koblenz, Germany, for the Bundesgartenschau (a biennial exhibition) the following year. It connects the banks of the river Rhine and the hill plateau next to Ehrenbreitstein Fortress. The cable car system has an 890m length and elevates 112m. The gondola system has an hourly capacity of 7600 people, the most for any such a ride in the world. It operates usually between April and October of a given year.

Deutsches Eck (“German Corner”) is the name of a headland in Koblenz, where the Mosel river joins the Rhine. It is also a place on Germany’s inland waterway system where great skill is needed when making a turn by ship.

Ehrenbreitstein Fortress (German: Festung Ehrenbreitstein is a fortress on the east bank of the Rhine where it is joined by the Moselle, overlooking the town of Koblenz. Occupying the position of an earlier fortress destroyed by the French in 1801, it was built as the backbone of the regional fortification system, Festung Koblenz, by Prussia between 1817 and 1828 and guarded the middle Rhine region, an area that had been invaded by French troops repeatedly before. Since 2002, Ehrenbreitstein has been part of the UNESCO World Heritage Site Upper Middle Rhine Valley.