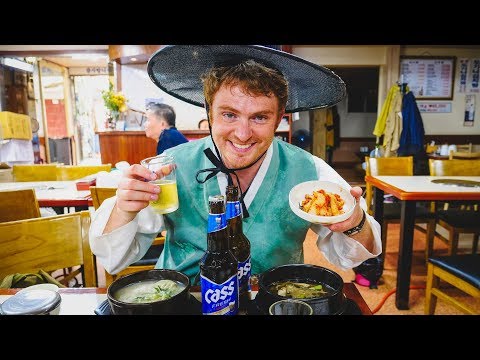 Join us from Seoul, Korea where we sample typical Korean food (Galbitang – 갈비탕) along with visiting Gyeongbokgung Palace (경복궁) while wearing traditional Hanbok. If you visit Seoul heading to one of the many palaces in the city as in absolute must and Gyeongbokgung is the most famous of them all.

If you dress up in Korean traditional clothing (known locally as Hanbok) you receive free admission to the palaces. As we first entered into the palace we were treated to a traditional drumming performance. As the main royal palace during the Joseon Dynasty it is a true landmark of Seoul.

After walking around the palace for a while we developed an appetite for dinner. On our way back to our hotel we found a place that specialized in Korean soups and stews. For my dinner I ended up ordering Galbi-tang. This delicious short rib soup consists primarily of short ribs, radish, onions and other vegetables. It is often served at Korean weddings.

Thanks to KTO for making this trip possible!