The Te Horo beach bach has found its place in the environment so successfully, it’s like it’s as nature intended.

At home in the windswept dunes on the Kāpiti Coast, this small but well-formed bach is the antidote to corporate life that many city-dwelling Wellingtonians dream of.
“We were looking around the area and came across the subdivision here before it had been marketed,” says owner Alan Cadwallader. “We were the first to buy a section at the southern end of the estate — and we think we got the one with the best view.” 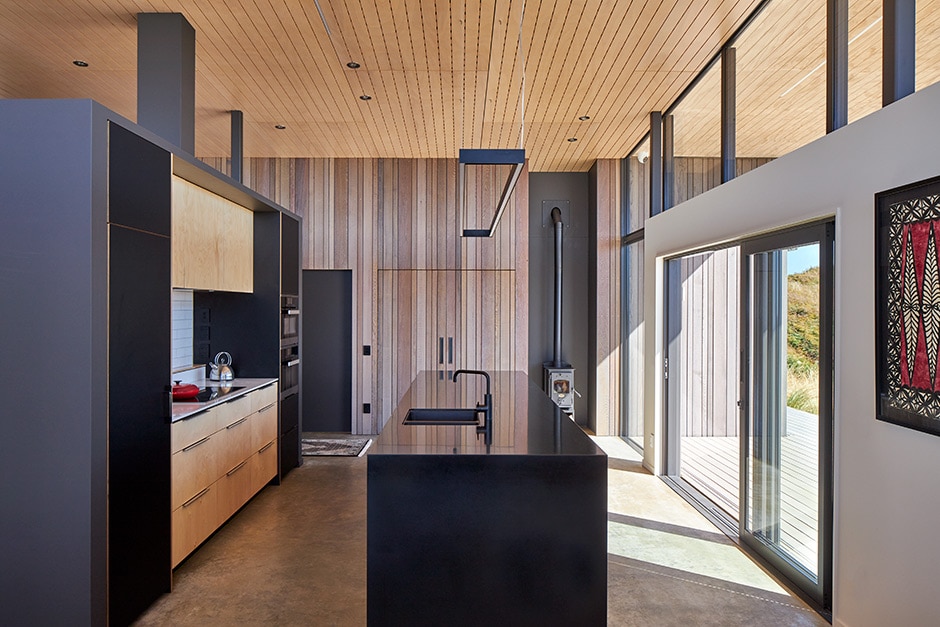 TOP The breathtaking setting is well and truly the focus here, and is brought inside through expansive clerestory windows from First Windows & Doors’ Residential Series ThermalHeart range that allow a view right through the building, from the driveway to Kāpiti island on the other side. They also help keep the home warm, dry and healthy. ABOVE The exterior cedar cladding morphs into a cedar interior feature wall that separates the home’s public and private zones. In the public space, the kitchen is in a palette of plywood and black, so as not to steal attention from the view. First Windows & Doors’ Residential Series sliding doors open on both sides of this open-plan area, blurring the lines between indoor and outdoor living, and allowing airflow to naturally cool the bach in the heat of summer.

The site south of Te Horo Beach was not a place for pretension, so once Alan and his partner Peter Corley had found their property, they began their next search — for an architecture practice that could design a building that was sympathetic to the environment and robust enough to endure the elements. 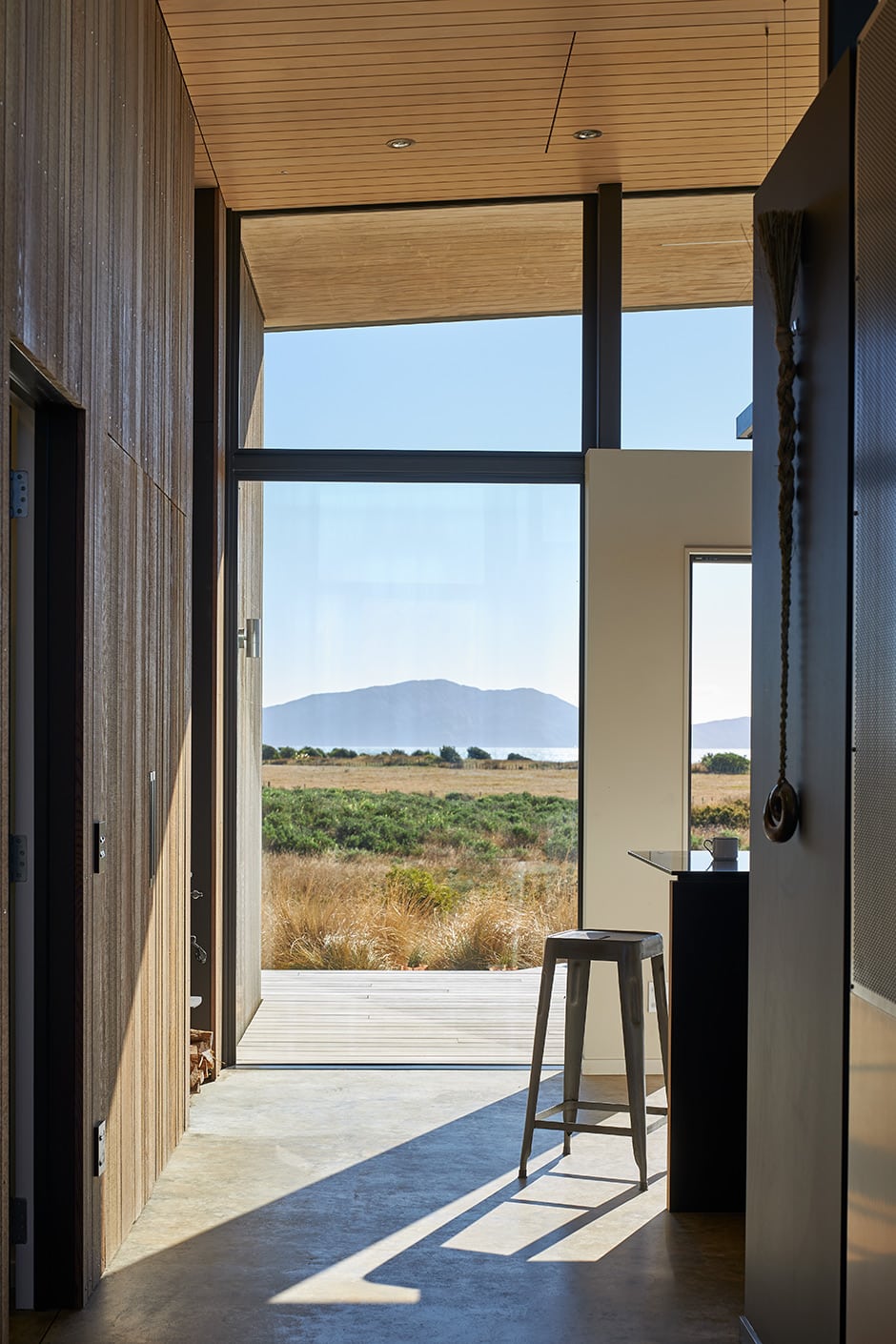 LIVING Passive solar principles guided the design, including a north-south orientation, strategic openings that allow light to filter in without creating a wind-tunnel effect, and the use of insulated ThermalHeart windows throughout the house. This tall inclusion creates a sweet-as spot in which to pull up a chair by the fire (just visible on the left).

“We were initially drawn to First Light Studio because we’d heard about this young group of architects who’d placed in an international design competition,” says Alan. “We met with directors Anna Farrow and Nick Officer, and thought their fresh approach to design unencumbered by a past legacy would result in a true design-and-build partnership. Also, they were thoroughly nice people to deal with — we made the call after the first meeting that they’d be the architects we’d work with.” 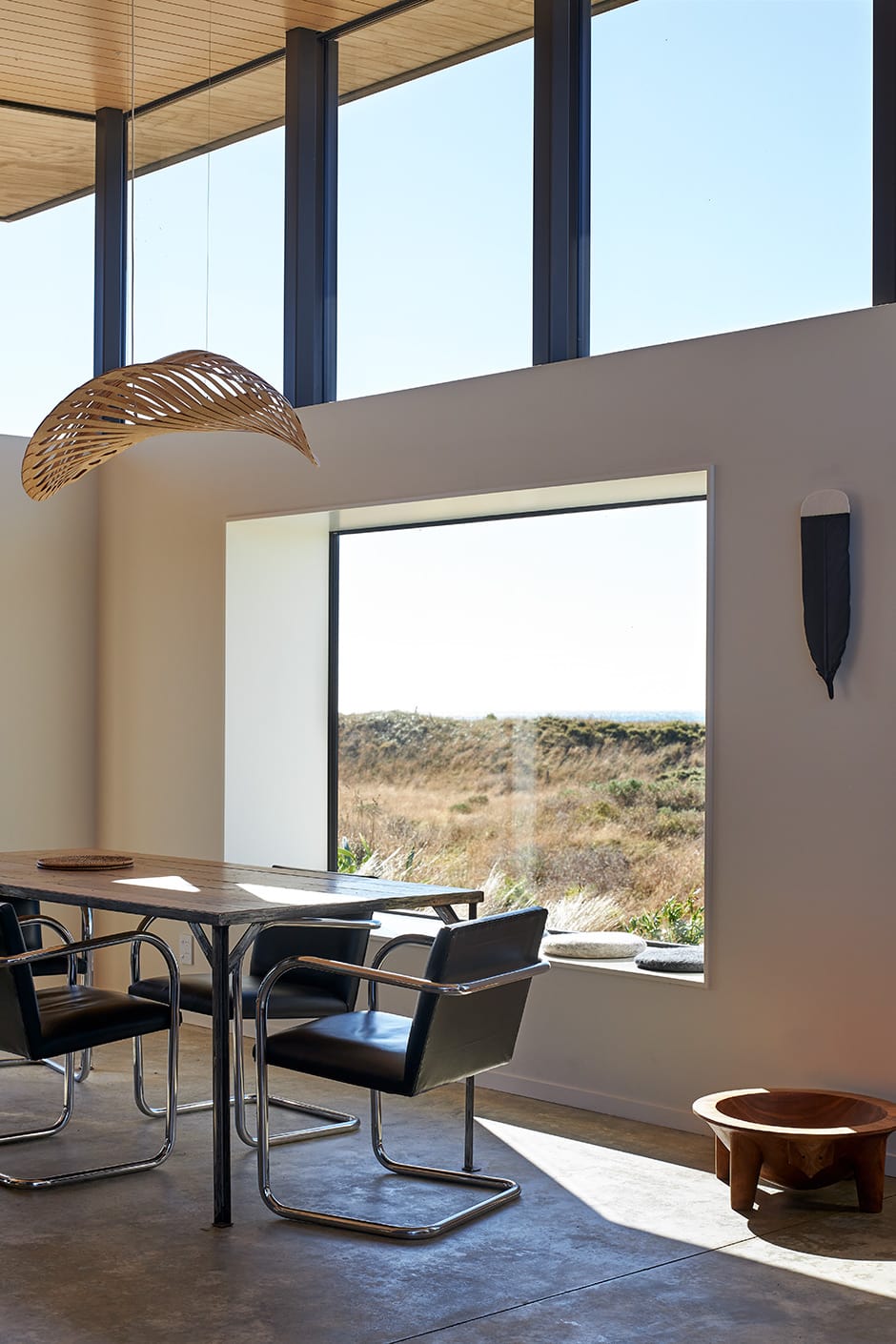 DINING “This window seat is quite fun,” says Anna of this boxed picture window, with its joinery powdercoated in Matt Ironsand like that in the rest of the house. “Even when it was being built, the builders said they naturally gravitated towards this area for their smoko.”

Uninterrupted views of the sweeping coastline and Kāpiti Island are key features of the outlook to the north and west of Alan and Peter’s new holiday home. Looking back across the land, the Tararua Range rises along the eastern side of the site. 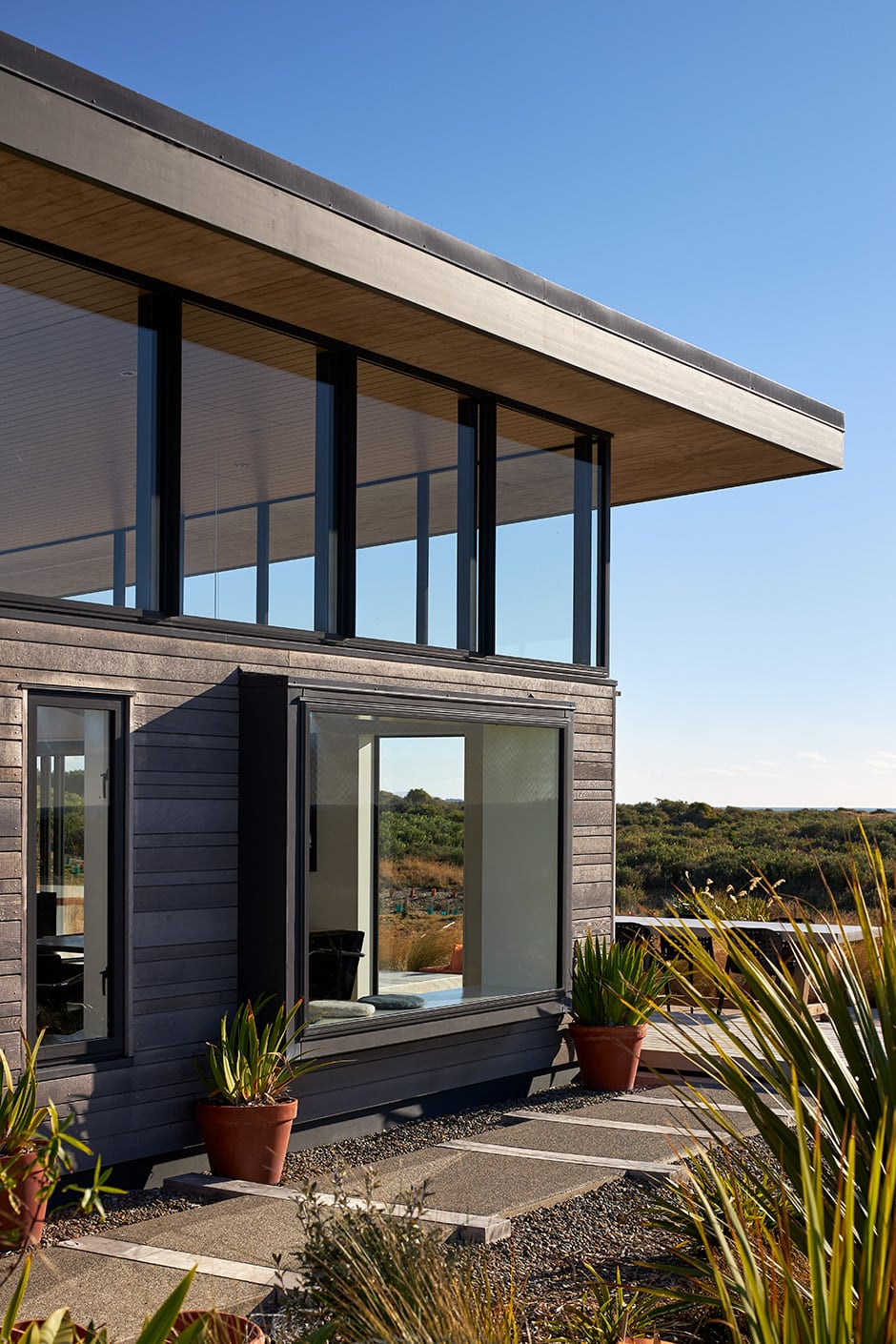 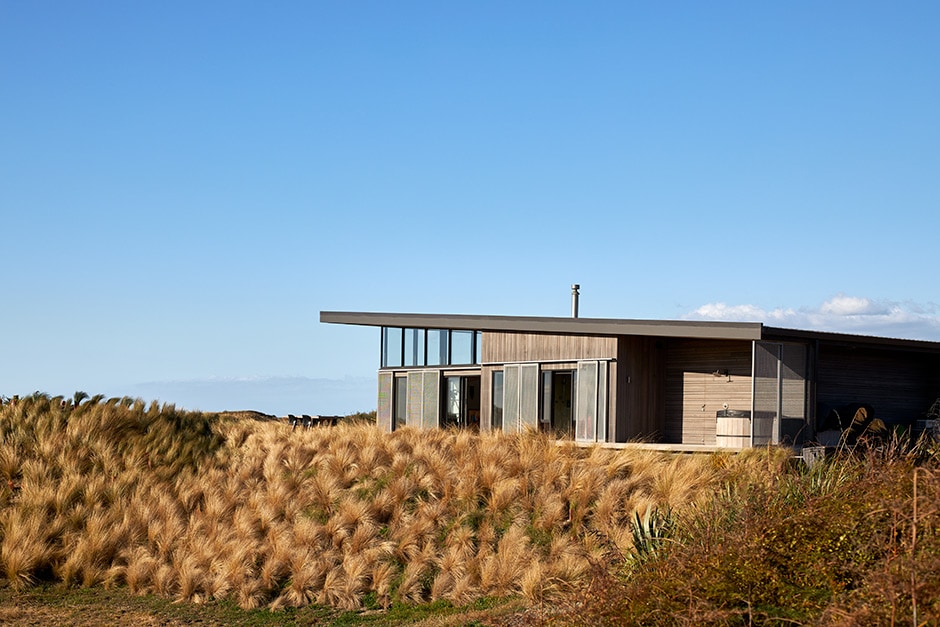 ABOVE Materials inside and out take their cue from the environment. The silvery stained-cedar battens reference the driftwood piled up on the beach, the organic nature of the concrete slab underfoot is similar to the sand, and the plywood on the ceiling is the same shade as the surrounding tussocks. Even the cedar hot tub blends in.

“It’s a pretty extreme environment out here and there’s a strong prevailing wind coming off the coast,” says project architect Anna. “Our aim was to work with these extremes, and also to work against them to help our clients live comfortably indoors and out, regardless of the weather.”
“The nature of the topography and the ground was really like building on a sand dune,” says Nick. “It’s constantly shifting as the wind and sea change. I remember building our first computer model of the topography and it was so undulating that it crashed our software.”
In order to nestle the home naturally into the landscape, the team opted to slice off the top of the dune designated for the building platform. “The idea was to have the roof hovering over the space to emulate the dune that came before it,” says Anna. A band of clerestory windows from First Windows & Doors surrounding the living area separates the roof from the rest of the building and lends the architecture a lightness. 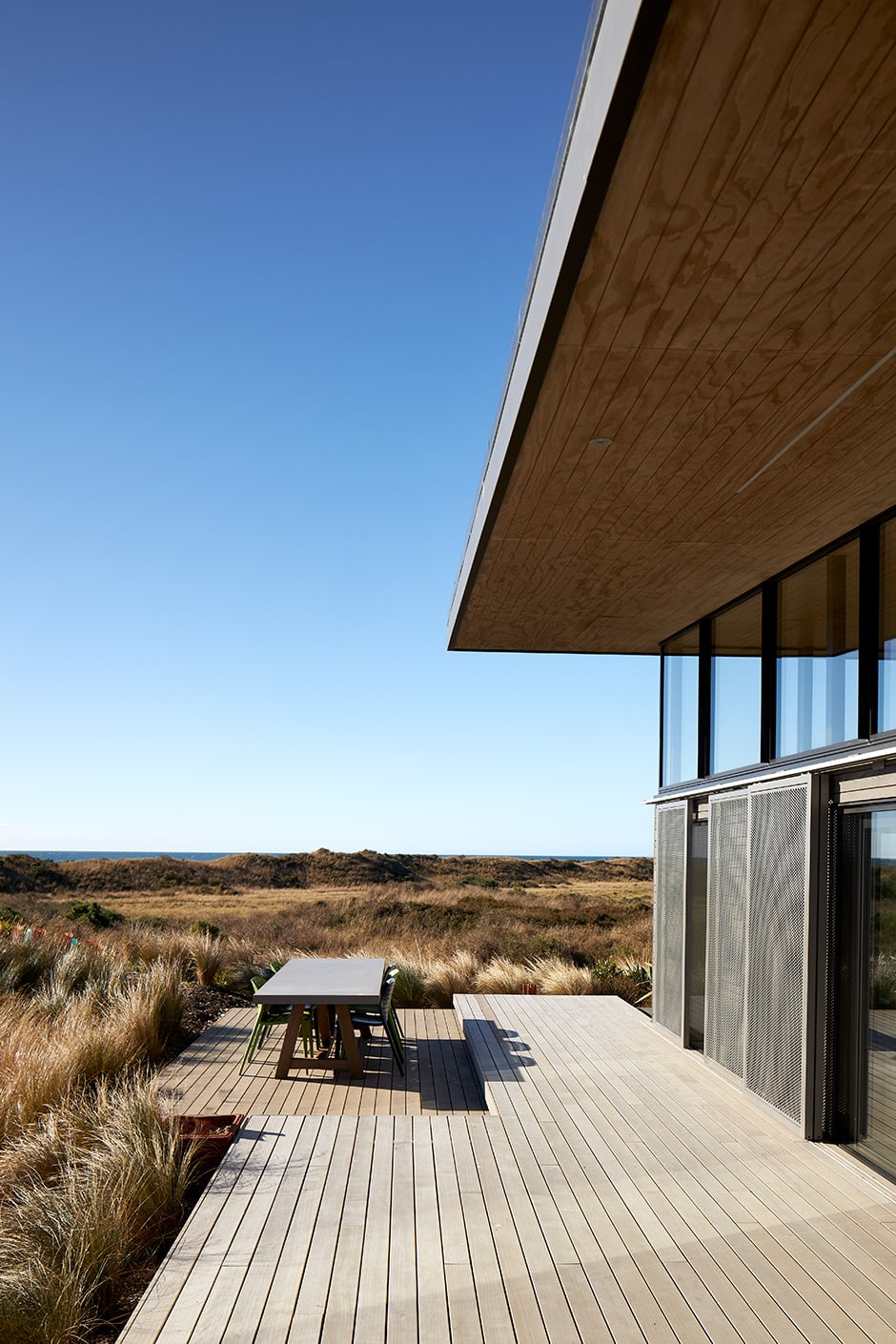 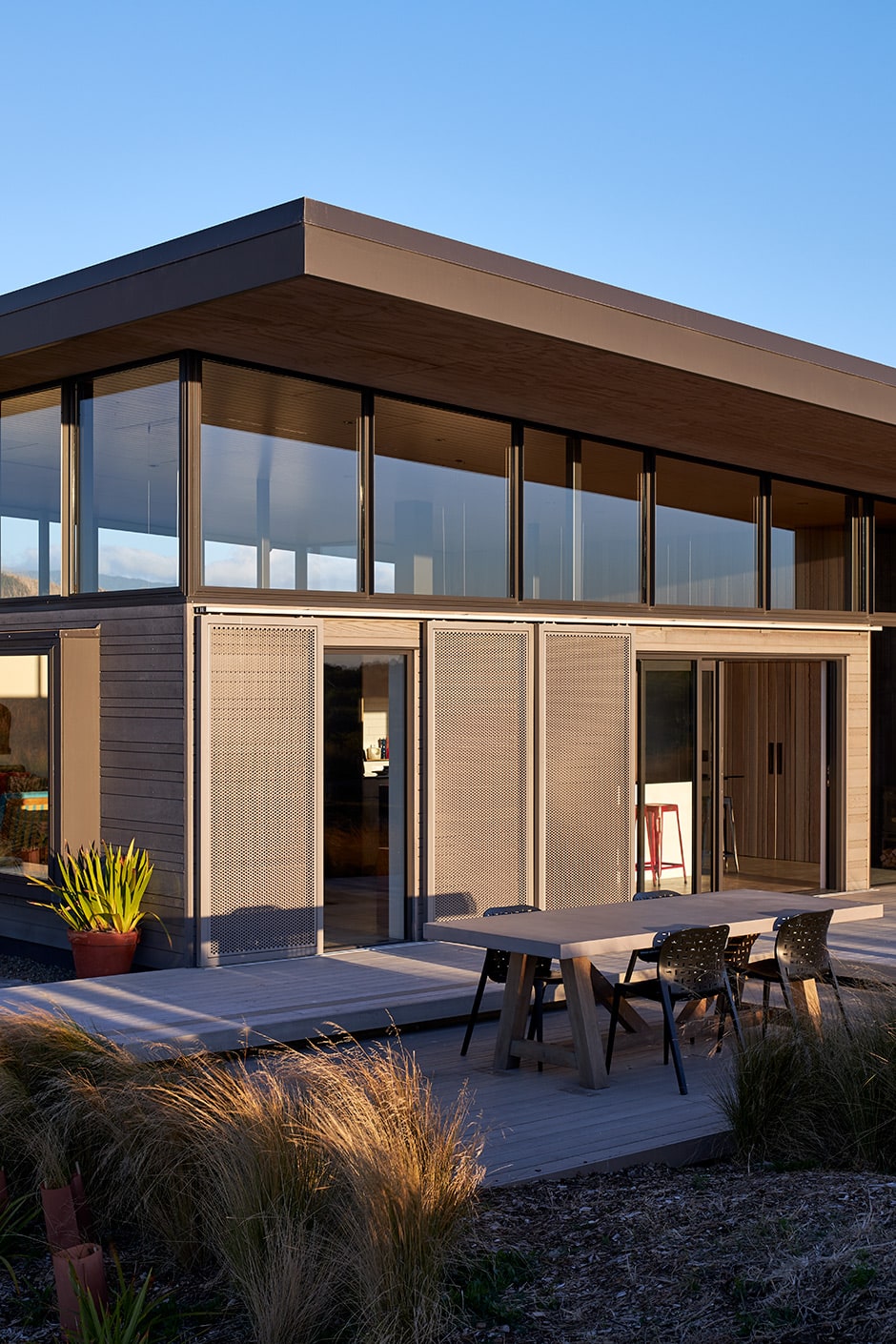 BELOW Soaring eaves on the west-facing deck shade the clerestory windows to prevent the house from overheating. Also acting as a shade device, perforated metal screens referencing Pacific Island typology create a permeable barrier. “Alan and Peter can open the doors and lock the screens in front of them, leaving the house ventilated but secure if they go down to the beach or out planting,” says Anna.

Having the Kāpiti Island focal point located to the west provided some challenges in terms of how the openings in that direction would be impacted by the sun and wind. “We really strategised where those windows were going to go,” says Anna. “There are sliding doors centred on the kitchen island, so when you’re preparing dinner there, Kāpiti Island is framed, and the picture window at the end of the dining area looks straight out to the coast when you’re gathered around the table. It was all about framing the view in certain places to get the most enjoyment out of those moments.”
Conceived as a bach that will end up as a permanent home, the floorplan accommodates the ebb and flow of guests with a clear division between public and private zones. “There are two different boxes of building, and there’s a stylistic change between them,” says Anna. “When you leave the lofty entertainment space and pass through to the sleep space, the ceiling height drops much lower and the rooms are more intimate, so it really feels like you’re retreating.”
Small and smart architecture is the driving force at First Light Studio, and a sustainable ethos underpins their practice. As well as utilising passive solar principles, for this project they designed the home to be self-sufficient through rainwater collection off the roof, a fire and wetback for heating the house and water, and a natural flow system to deal with waste water.
And sustainability doesn’t stop with the architecture. “Restoring the landscape to something like what would have been here before it was farmland was important for us from the outset,” says Peter. “We wanted to create something of a native oasis in a challenging environment. We best describe it as the land having lost its memory; it was regenerating with pest weeds, so we’ve had to invest time and effort into clearing them and keeping them from coming back, while establishing plants that will thrive.”
For Peter and Alan, occupying the home has been the most rewarding part of the process, though Alan says they felt very fortunate throughout. “First Light understood our brief and did a lot of the heavy lifting on the detailed decision-making. They brought in builders Pinnacle Construction during the design process, so there was common understanding of what we were aiming to achieve, and because they’d worked together before, the translation of design to build  was seamless. It was a stress-free build for us, and we’d happily do it all over again.”
A few short years since they first broke ground, the couple are already reaping the rewards of the hard work they’ve put into creating their coastal bolthole, living in the landscape and connecting with the rhythms of the day.