Falling in Love with Mexico: When a Mexican Expat moves back Home


For the past 8 years, I have lived outside Mexico and travelled to different continents to see “the world out there”. From Europe to South America and the Caribbean, I have seen outstandingly beautiful places and eaten the most exquisite dishes. However, all this time spent abroad grew in me the wish to get to know my own country – a place I barely knew. I remember meeting people from all over the world who happened to have visited Mexico and realized, to my shame, that they knew more about my own homeland than I did. So, last year I decided it was the right time for me to go back and to explore the country where I was born, but this time from a new perspective.

Earlier last year I moved to Mexico City and started a new life. It was a personal challenge I was ready to abandon because I had a misconception about this city. I could not imagine that that was my own perception of how foreigners felt about visiting my country.

The capital city is a large, cosmopolitan and crazy place for outsiders. People do not believe me when I tell them I was scared to come here. Some of my friends were like “Come on Alicia, you have traveled to so many places on your own and lived abroad for so many years; Mexico should be a piece of cake for you”.  And they were right, I have been to so many places, I speak several foreign languages, I am a very outgoing person, very independent… However, Mexico really freaked me out.

I think that when people travel and live abroad something strange happens to us. We become much more adaptable, we are open to new adventures, we try almost everything, we explore the place, we wander… It’s as if we want to see as much as we can of that other country – but this does not happen when you are “home”.

Plus – in my defence – as a provincial girl who had never visited Mexico City before, it was a big shock. Even though it is my country and we speak the same language, there is a big gap between “capitalinos” (people from the capital) and the rest of us; the truth is we are all different. It took me several months to adapt to this boisterous city and its people but once you pass that first stage, Mexico can get you hooked.

For the past year I have traveled to different states within Mexico, I have (re)learned about Mexican roots, customs, cuisine and I have discovered so many beautiful places to visit. I have also (re)learned about how to remain safe while in Mexico because, whether I like it or not, Mexico still is a bit dangerous – especially when you are an outsider.

I will suggest for every person who is visiting my lovely country to squeeze the very last drop out of it but to always be safe. Just as in any other country there are some neighborhoods to avoid, certain hours to preferably take a cab instead of walking, etc.

Mexico as a whole is developing very fast. Back in the day we did not have as many options as we do now. For instance, in 2008 traveling by plane was still a luxury just a few could afford. Now there are many low cost airlines (such as Interjet, Volaris, Vivaaerobus) that can take you from Mexico City to Guadalajara for as low as 700 pesos (35USD) one-way. We also have a very large network of buses that can take you as far as you want from the Peninsula of Yucatan to the United States. You can also rent a car and drive around – my suggestion here is just be careful. Mexicans drive crazily and it is easy to get lost on the roads, but on the positive end the landscapes are amazing.

I believe Mexico has a lot to offer for every taste. You can find beautiful colonial cities, crystal-watered beaches, astonishing mountain ranges, wild rainforest, majestic ruins and so much more! Try to ask locals for places to go, where to eat, what to do, etc – they are the best guides.

From my own experience, I think that Mexico should be in every bucket list. Its people are so welcoming and helpful that I am sure you will come back!

All photos by Alicia Aguilar.

This article is part of our  featuring stories from and about the meaning of ‘home’. 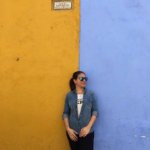 Alicia was born in Jalisco; she has been living in Mexico City since last year. She is an avid traveler; she loves foreign cultures, languages, photography, good food and swimming. She loves to share her passion for adventure and the discovery of the “unknown” through photographs – follow her on Instagram !