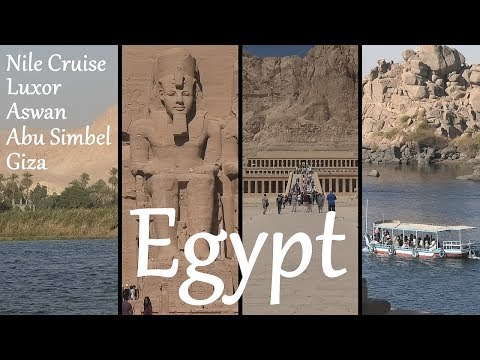 Impression of Egypt along the Nile during a 7-day cruise. Ending with the Giza Pyramides & Sphinx.

Egyptian civilization have depended on the river Nile since ancient times. Most of the population and cities of Egypt lie along the Nile valley north of Aswan. Silt deposits from the Nile made the surrounding land fertile because the river overflowed its banks annually. The Ancient Egyptians cultivated and traded wheat, flax, papyrus and other crops around the Nile. The Nile was also a convenient and efficient means of transportation for people and goods. Nearly all the cultural and historical sites of Ancient Egypt are found along river banks.

The Nile was an important part of ancient Egyptian spiritual life and considered to be a causeway from life to death and the afterlife. The east was thought of as a place of birth and growth, and the west was considered the place of death. Thus, all tombs were west of the Nile, because the Egyptians believed that in order to enter the afterlife, they had to be buried on the side that symbolized death.
_______________________________

No tripod was used, it was not allowed (also there wouldn’t be enough time during group excursions).

A videography ticket (EP 300) is needed to film inside the Abu Simbel Temples, Valley of the Kings, and museums.

To take pictures only in museums, a photography ticket is needed (EGP 50).

Our Corendon guide during the cruise was Essam Fayez (Egyptian nacionality). This excelent Dutch speaking guide contributed greatly to a fantastic holiday.