So, I’ve somehow managed to go my entire life without getting my ears pierced. After 37 years I’m finally considering it! The pure abundance of giant and colorful earrings on offer these days is almost irresistible! Yes, some tend to come with a steep price tag but the good news is we’ve come up with some great tutorials to create them at a fraction of the price. Plus, you get to boast that you made them yourself. Take a look!

Step 1: Wrap your yarn around two poles about a foot apart (we used a stool for this). Continue to wrap the yarn around the two poles until you have a thick bundle, approximately 1” in diameter. Cut off the ball of yarn.

Step 2: Tie knots along the bundle every 2-1/2”. To make sure your knot is super secure, you should wrap several knots around the bundle.

Step 3: Remove the bundle from the two poles. Cut between the binding knots to release your poms. Trim the poms until they are perfectly round in shape.

Step 4: Stick an eye pin through the knot in the pom. While holding the eye on one end, use your round nose plier to curl the straight end into a large loop. This loop will keep the pin from sliding out of the pom.

Step 5: Loop the earring hook through the eye pin. Repeat to create your mate.

Step 1: Roll out the Sculpey on a piece of parchment paper so that it is about a little less than an ⅛” thick.

Step 2: Using an x-acto knife, cut out your design from the rolled out Sculpey. Smooth out the edges with your fingers, then poke a toothpick sized hole to hang it from later.

Step 3: Bake the Sculpey as directed on your package. It will likely be a very short amount of time due to the thinness of the Sculpey. Let cool.

Step 5: Using a round nose plier, curl the straight end of an eye-pin so that you have a figure eight, with the newly curled half larger than the original. Open the larger curl, and thread through the toothpick hole you made earlier.

Step 6: Loop the earring wire through the eye pin. Repeat to create your mate.

Step 1: Draw your design on the shrinky dink paper, then cut it out. Punch a hole to hang it from later. Keep in mind that your design will shrink to about 1/3 of the original size.

Step 2: Bake the shrinky dink as directed on the package. You can lay a small piece of cardstock over the top of your design to keep it from curling.

Step 3: Using a round nose plier, curl the straight end of an eye-pin so that you have a figure eight. Open the larger curl, and thread through the hole you made earlier.

Step 4: Loop the earring wire through the eye pin. Repeat to create your mate. 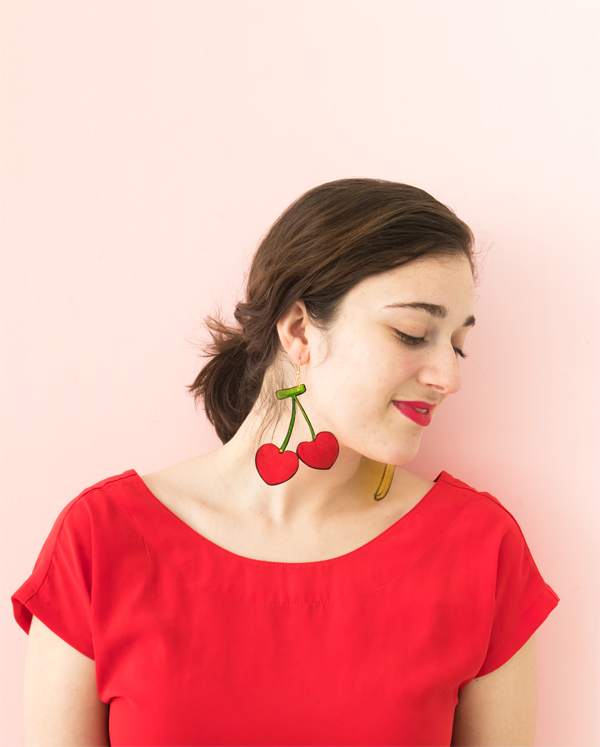