You know how sometimes you’re craving dessert, but can’t quite decide what’s going to hit the spot, cookies or brownies??

How about both? And that’s how brookies were invented. I have to admit, I haven’t been overly into brookies; but Caitlin was recently on a kick and seemed to be sharing photos of them about every other night so I started craving them. And something I’m definitely into is …so a skillet brookie idea popped into my head and I couldn’t just let it go. So I whipped one up, had my family taste-test it and they declared it worthy of sharing here!

I’ve had to make this chocolate chip skillet brookie a few times, so I’ve learned a couple things. First, the brownies…yes, I used a box mix; because they’re good + super easy, so I went with that. I use Ghirardelli Triple Fudge, and think they are the best! Also, the brownie part might seem slightly underdone (mostly on the bottom), but trust me, it’s way better this way! I made one skillet brookie that was a little more on the done side (not burnt, just well done), and it just did not taste as good.

Another thing, you can freeze this!

I made one to take on a recent trip and had it in the freezer for about 4-5 days, and it still tasted great! But it’s best when it’s still warm from the oven with some ice cream along with it! 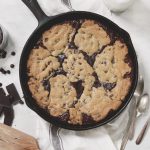 The best of both worlds – a chocolate chip cookie and a brownie – baked in a skillet for the best dessert!
Course Dessert, Snack

For one of my favorite desserts ever, you must try this ! And check out more delicious recipes .