Most people would think of Brazil as of a beach travel destination. The rest of the country, which frankly speaking is huge, is forgotten. Unfair, isn’t it?

For those of you a little bit more curious, a second look at the map would make you wanna see what lies inland. The good news is that the heart of Brazil is not any less fascinating than its beaches and if you have not heard about the chapadas, it is time to plan a trip there.

There are four big chapadas in Brazil and a couple of smaller ones. Chapadas are vast systems of table mountains and spectacular valleys – expect waterfalls, gazillions of them; expect pure nature and interesting cultures; expect to fill your batteries with powerful, beautiful energies.

Chapadas are located in different states, far from each other and it would be wrong to say that this one is better than that one. Each one is special: Diamantina, dos Veadeiros, dos Guimaraes or das Mesas.

Chapada dos Veadeiros is a true hidden gem particularly close to me though. It is far from the coast and attracts conscious travelers. It has been a place to learn about the disappearing and endangered cultures of Brazil. Since 2000, the amazing event of takes places here in July and August. There are several quilombolas in Chapada dos Veadeiros; settlements founded by escaped slaves who survived on their own far away in the jungle. In the quilombolas communities they preserved cultures which have been wiped out or disappeared almost completely due to persecution along the centuries. Some of them survived and still pursue a simple life in harmony with the nature.

Apart from its cultural importance, Chapada dos Veadeiros is literally a paradise. Nature at its purest form is everywhere: waterfalls, lakes, caves, rivers, exotic birds and the plains of cerrado – it is hard to describe its beauty in words. One does not need to stay in a line to enjoy the nature, take a dip in the waterfall or order dinner. This chapada is also proof that there are safe places in Brazil. You will feel like a member of the family, you will be given a ride without asking for it and you will probably start learning your first words in Portuguese here – friendliness is in the air.

Chapada dos Veadeiros is also a paradise for geologists, as the platform sitting at its base is made of crystals so bright that the chapada is even visible from space. Not kidding!

Brasília, the capital city, is about 3h driving away and is the closest gateway to Chapada dos Veadeiros.

Alto Paraíso de Goiás and São Jorge are the best places to be based in. Boutique and rustic are the right words to describe these places. Alto Paraiso is bigger and has a better infrastructure, whereas São Jorge is a charming small village, quite artsy and peaceful.

Most of the waterfalls are located within a private property with small entry charges, but the good news is that these sites are therefore really well preserved and taken care of. Vale da Lua and Cachoeira Santa Barbara are a must-see.

The national park, located just a few minutes’ walk from São Jorge does not have an entry fee. The trails are very easy to walk, but one needs a day for every trail.  The park is full of lilies and orchids – just imagine!

I would really recommend this place to people who like to connect with nature, who love art and culture and are looking to explore the beautiful but non-touristy Brazil.

Had you ever heard of the chapadas before? 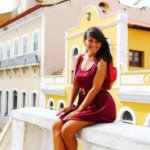 Elena Skalovskaia is a curious world traveler, genuinely inspired by places and people. She has been to 71 countries and brought home bags full of memories, some of which are worth sharing. Amongst other favorite destinations, she has been traveling extensively in Brazil, visiting places which are rather unknown outside of Brazil. One of them is Chapada dos Veadeiros. She is also the Brazil Travel Specialist at . Find her on Instagram and her blog .