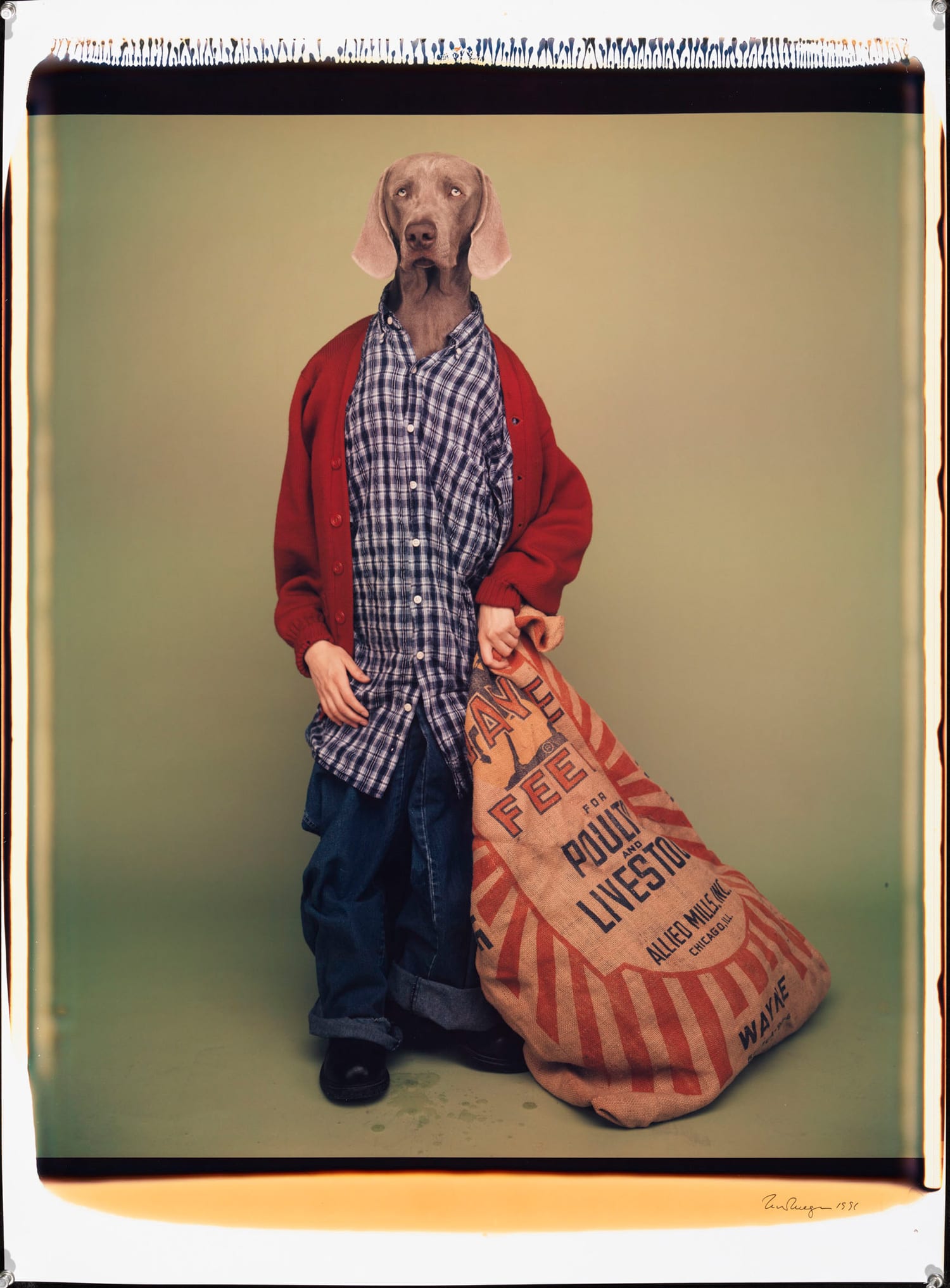 Switzerland’s Museo d’arte della Svizzera Italiana presents Being Human, a selection of 100 works by the eclectic American artist featuring Weimaraner dogs. Wegman’s work moves between painting, drawing, photography, film, video, books and performances. However, his prominence on the international art scene traces to his images featuring dogs; his main photography focus ever since getting his first pet Weimaraner, named Man Ray, in the ‘70s. 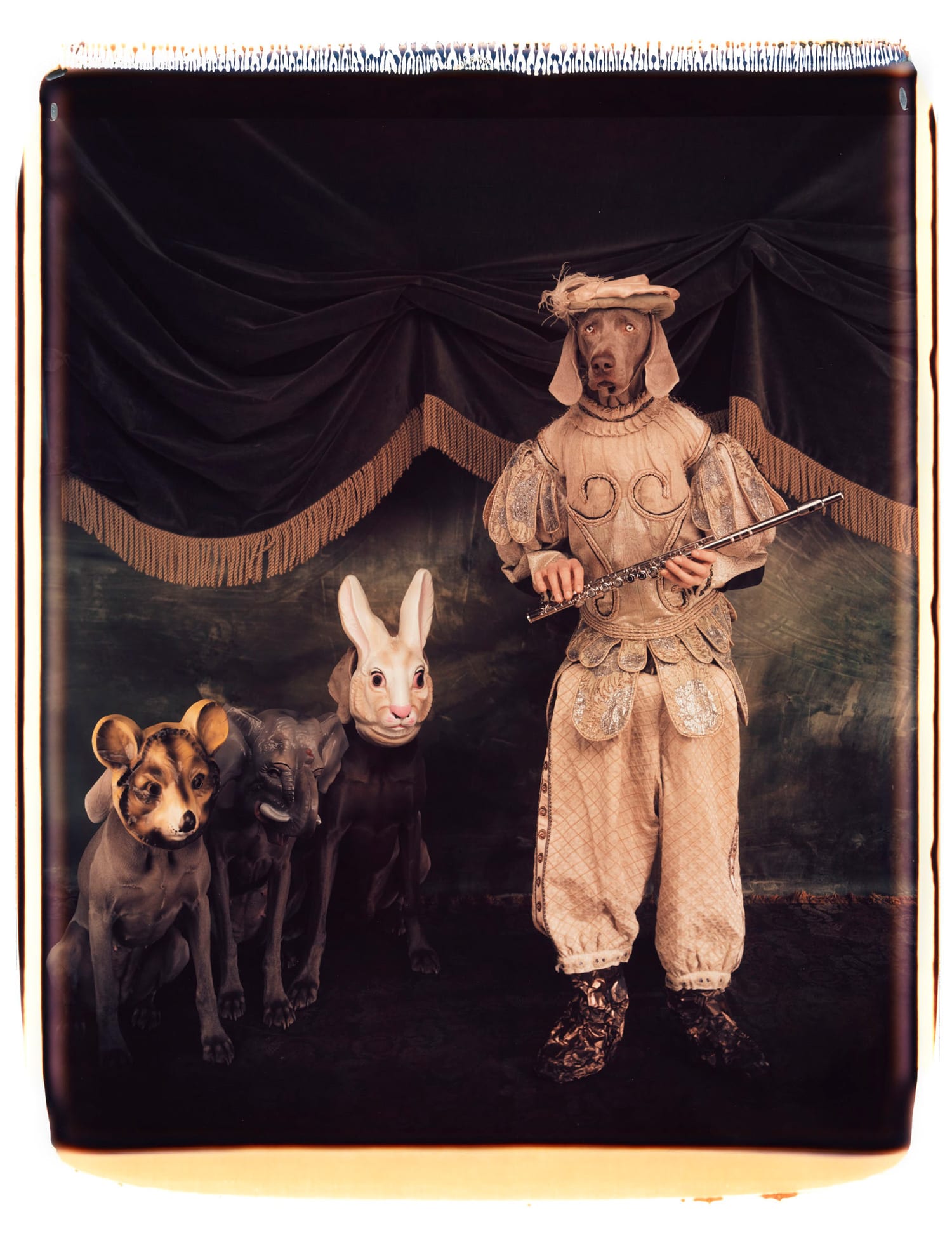 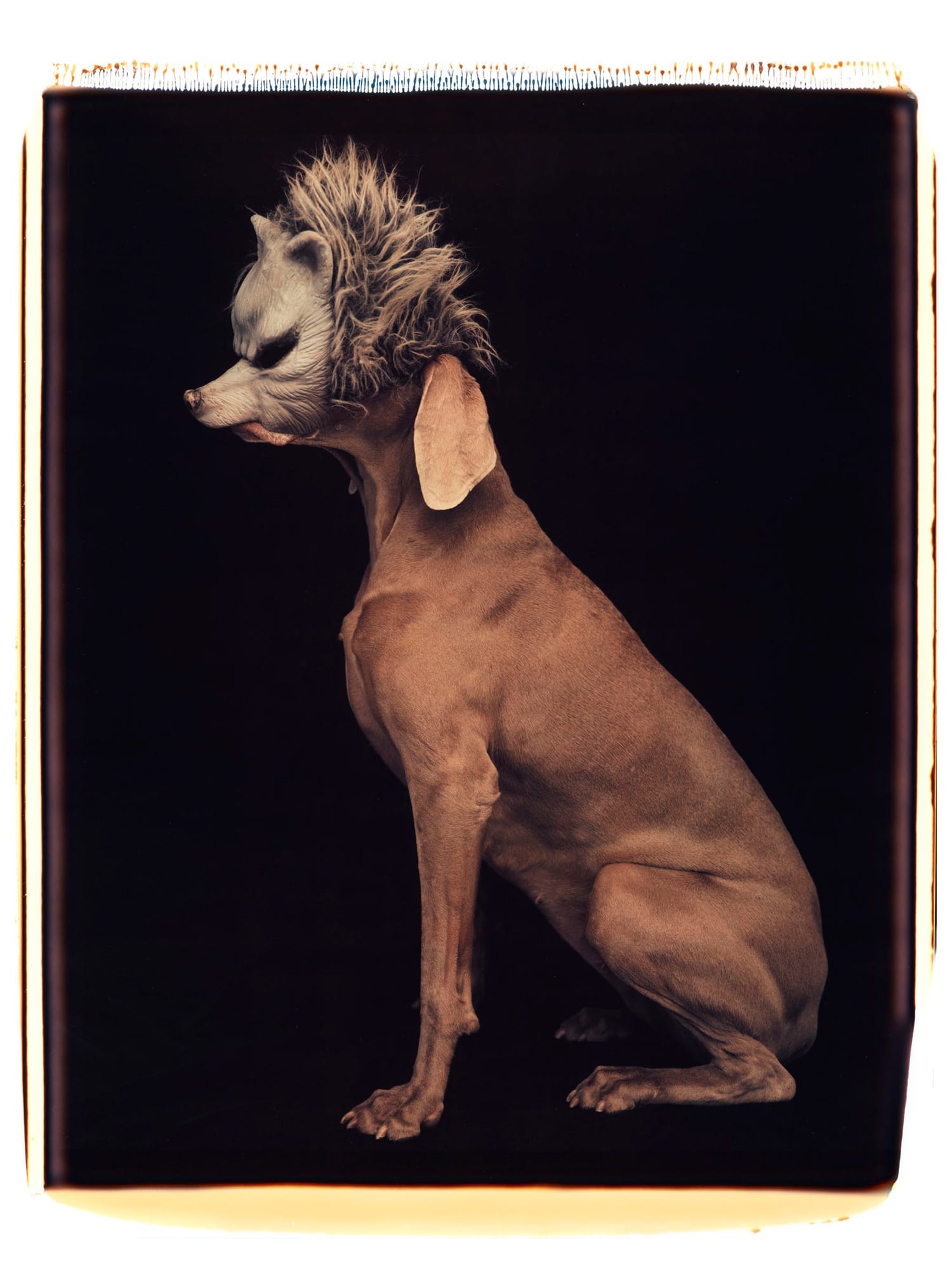 Exhibition curator William A. Ewing says, “Being Human suggests that it is not: the subject is us, and we are them: the housewife, the astronaut, the lawyer, the priest, the farmer, and even… the dog-sitter! Some of them pose with pride and confidence, while others express uncertainty or vulnerability: they are human beings!”

The exhibition is divided into chapters, each of which addresses a theme. The People Like Us section presents portraits of human stereotypes played by dogs, such as a priest and an astronaut. Tales (or ‘tails’) includes historic portraits set in elaborate scenes against painted backgrounds, and contemporary portraits incorporating references to literature and film. The Nudes chapter includes photographs in which the dogs’ agile bodies form abstract compositions, while in Hallucinations the body dissolves completely, and Wegman transforms his subjects into ghostly apparitions. 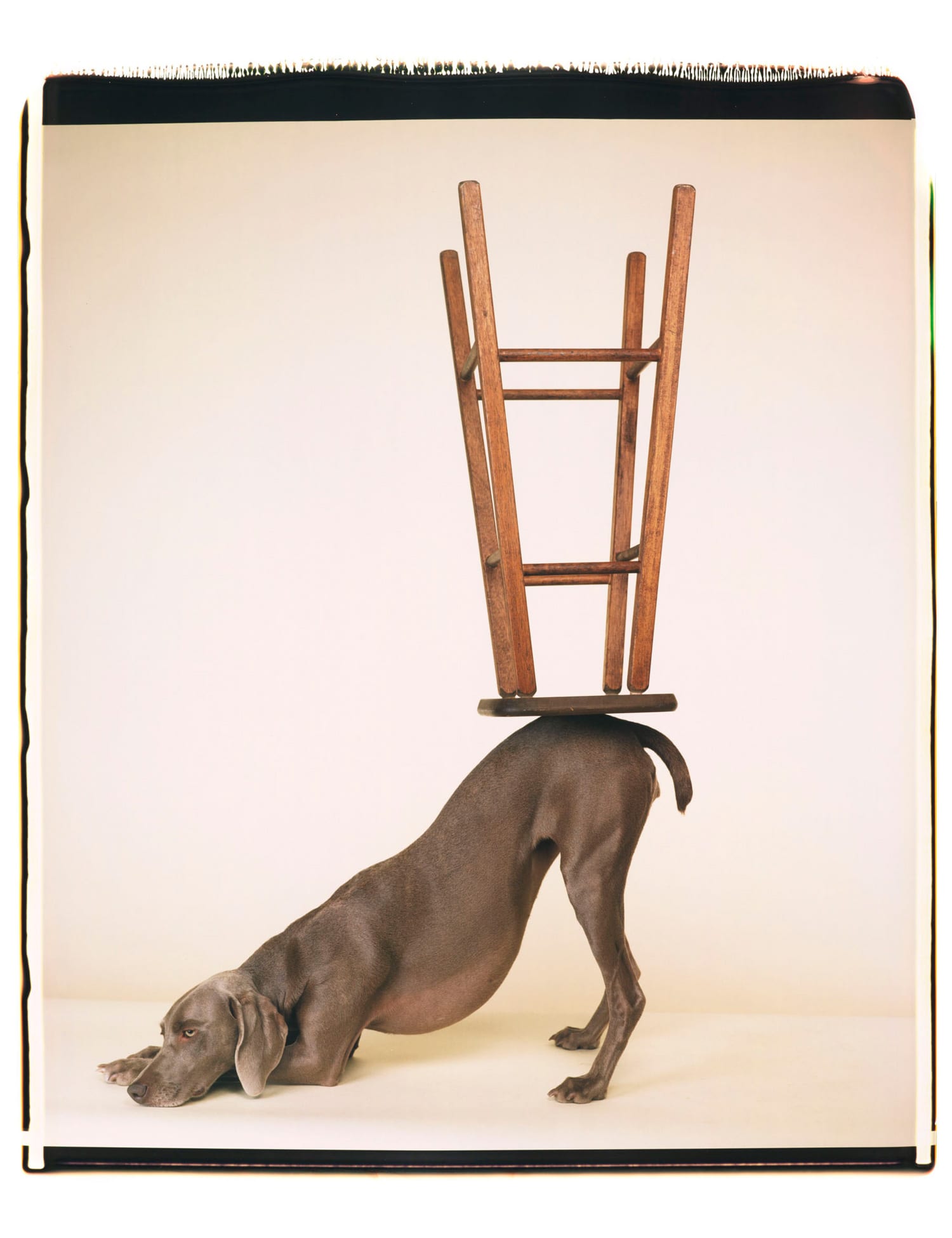 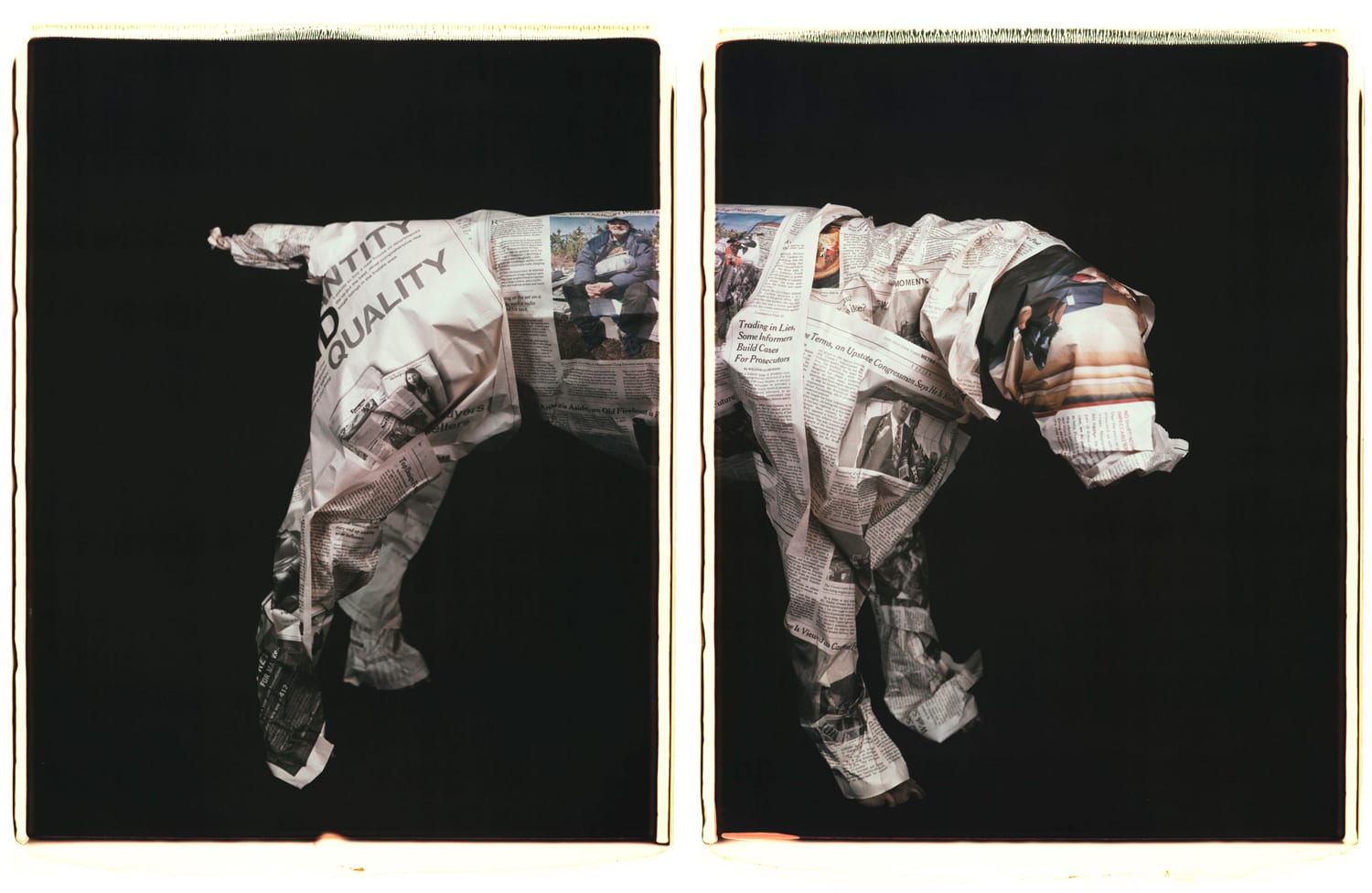 The photos in the Vogue series cover decades in the history of fashion, from casual to haute couture, while in the Cubists, the Weimaramers balance on cubes. In Colour Fields, the dogs break up the chromatic order while separating different fields of colour. Lastly, Sit/Stay features the subjects lying down or standing up and balancing a variety of objects.

A selection of films made by Wegman since the ‘70s completes the exhibition, featuring Weimaraner’s as deadpan comic talent that imitate performances by conceptual artists, or represent clichés about art.

Being Human is a project by the Foundation for the Exhibition of Photography, Minneapolis/ New York/ Paris/ Lausanne in partnership with Museo d’arte della Svizzera Italiana, Lausanne. The exhibition in Lugano, on show until 6th January 2020, is the first on a tour of European museums promoted by the Foundation.