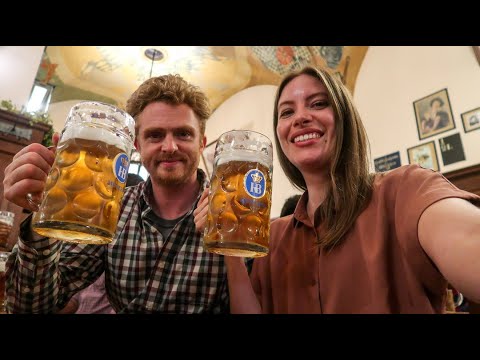 We went on the Bavarian beer and food tour with @ViatorTravel: https://bit.ly/3Gv9soo You can use the code AUDREY15 for 15% off a Viator experience!🍺

Today we’re taking you on a German beer tour across Munich with Viator and there’s only one word you’ll need to know: PROST! In this tour, we’ll sample a lot of beers: Helles, Dunkles, and Weissbier. Plus, we’ll visit the Oktoberfest Museum, try some Bavarian food, and visit Munich’s most famed beer hall. It’s going to get loud and it’s going to get rowdy, but that’s just a Monday night in Munich for you!

After meeting our group at the tour office and sharing a beer in the parking lot, we got on the subway and travelled 2 stations to Marienplatz to begin our German beer tour. Our first stop of the night was the Beer and Oktoberfest Museum, located in Munich’s oldest townhouse which dates back to 1340. Here we did a fun beer tasting sampling 3 different types of beer. We started off with the Helles, which is a pale lager. This beer was definitely right up my alley. Some salted pretzels also appeared as a nice little snack. Next, we tried a Dunkles, which is a dark beer. A Munich Dunkel is characterized by its ​​low bitterness, malty flavour, and dark colour which can range from amber to a dark reddish-brown. Sam really enjoyed this one. And the last beer we tried at this place was the Weissbier, which is a wheat beer. This one had some surprising banana notes, and proved to be another favourite.

After sampling those 3 beers, we visited the Oktoberfest Museum. Here we learned about the origins of Oktoberfest which date back to 1810 when a horse race was held to celebrate the wedding of crown prince Ludwig and Princess Therese of Saxony-Hildburghausen. The citizens of Munich were invited to attend the festivities held on the fields in front of the city gates. The event proved to be very popular and was repeated a year later, and then eventually carnival booths, games and other attractions were added to the mix. And so what started out as the celebration of a royal wedding, turned into one of the biggest parties in the world.

During the beer tour, we also learned about the Bavarian purity law enacted in 1516 which states that beer brewed in Bavaria may only include three natural ingredients: water, barley, and hops…and yeast by default.

After visiting the Oktoberfest Museum, it was time to go down the famous medieval staircase which extends from the ground floor all the way to the attic in a single unbroken line. Just watch your head if you’re on the taller side.

Our next stop on this Bavarian beer tour was Weisses Bräuhaus is the oldest wheat beer brewery in all of Bavaria. It has been in the possession of the Schneider family since 1928, so it is also known as the Schneider Bräuhaus.

Now about the food: we mentioned this tour we booked through Viator was a Bavarian food and beer tour, and this is the part where we got to sample some new-to-us foods! Included in the experience was the brewhouse cold platter featuring smoked meat, liver cheese, pickled vegetables, mountain cheese, Bavarian cheese, dark bread, a pretzel and lard. I know some of these foods may sound a bit unusual, but trust me, they taste better than they sound! Plus, the beer kept flowing. I went for the Weissbier, which is the wheat beer I mentioned earlier – the fruity banana flavour won me over.

And last but not least, we couldn’t end this Bavarian beer tour without visiting Munich’s most famous beer hall of all. Hofbräuhaus started out as the royal brewery in the Kingdom of Bavaria, and it quickly became known for its Weissbier, which is brewed with a large proportion of wheat relative to the amount of malted barley. Now, I couldn’t tell you if we actually got Weissbier at this place or the specially brewed Oktoberfestbier… All I know is that a 1-litre stein of beer showed up at the table and the festivities continued. There was live music, there was chanting, there was singing – it was everything you could imagine Oktoberfest in Munich to be, and it was super lively for a Monday night!

So, if you find yourself in Munich and you want to try some Bavarian beer and make some new friends, this is definitely a fun tour to go on!