Redesigned in 2020 by Hannes Peer Architecture, this inspiring apartment / atelier is located in Milan, Italy. 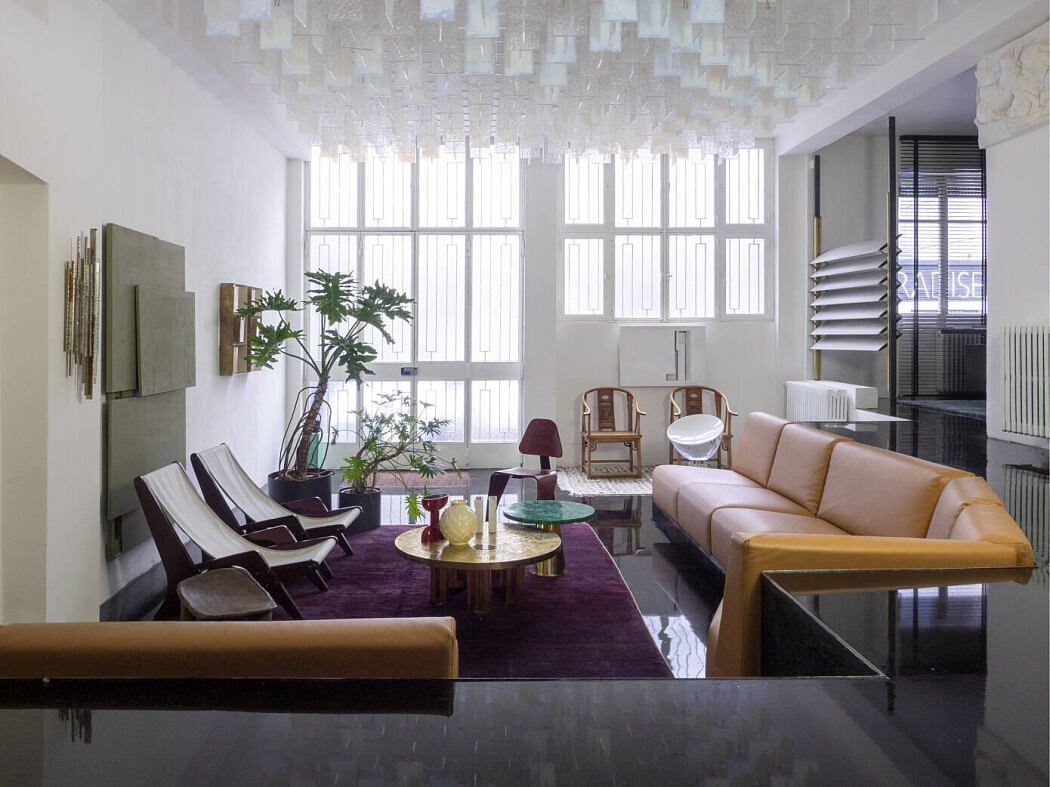 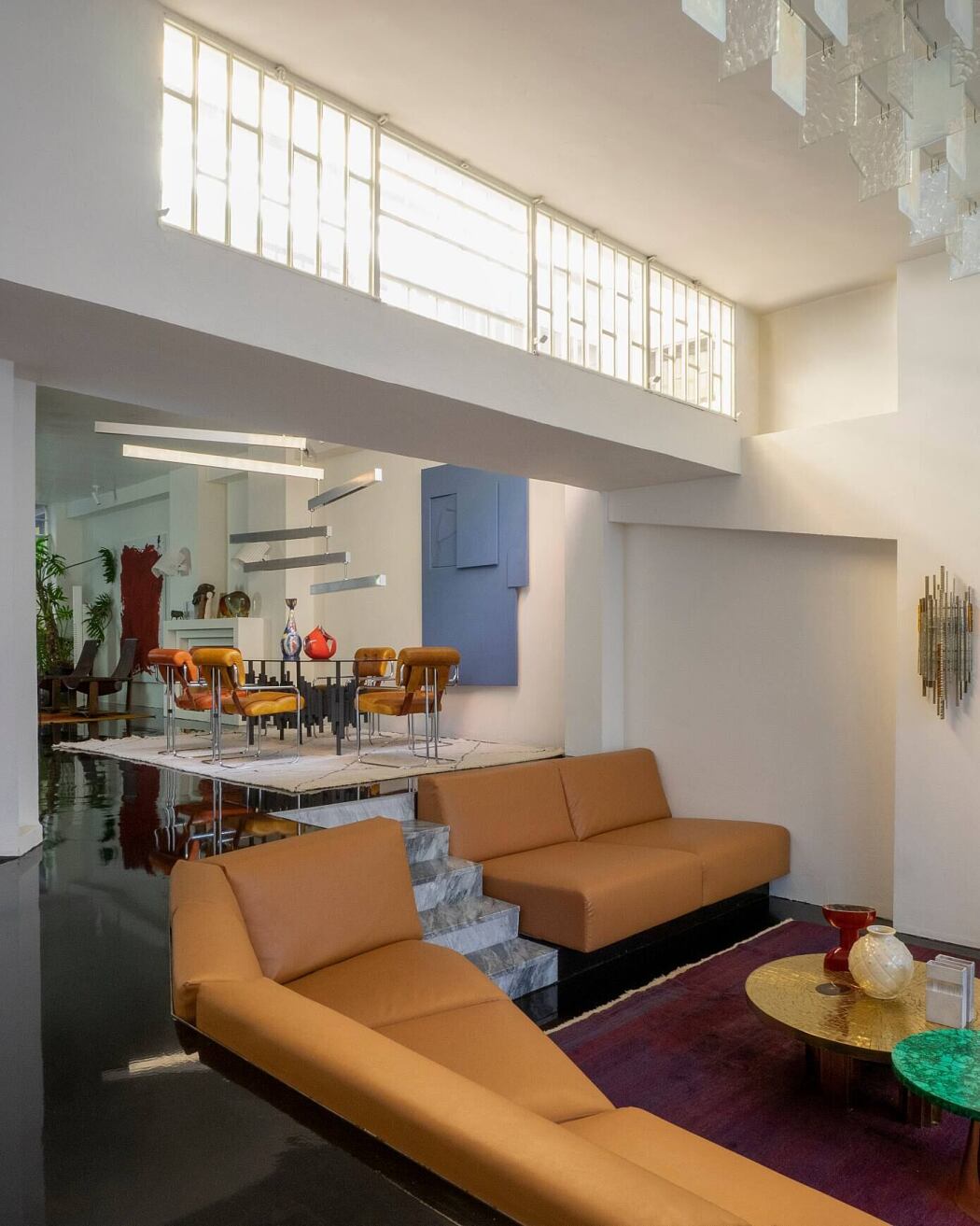 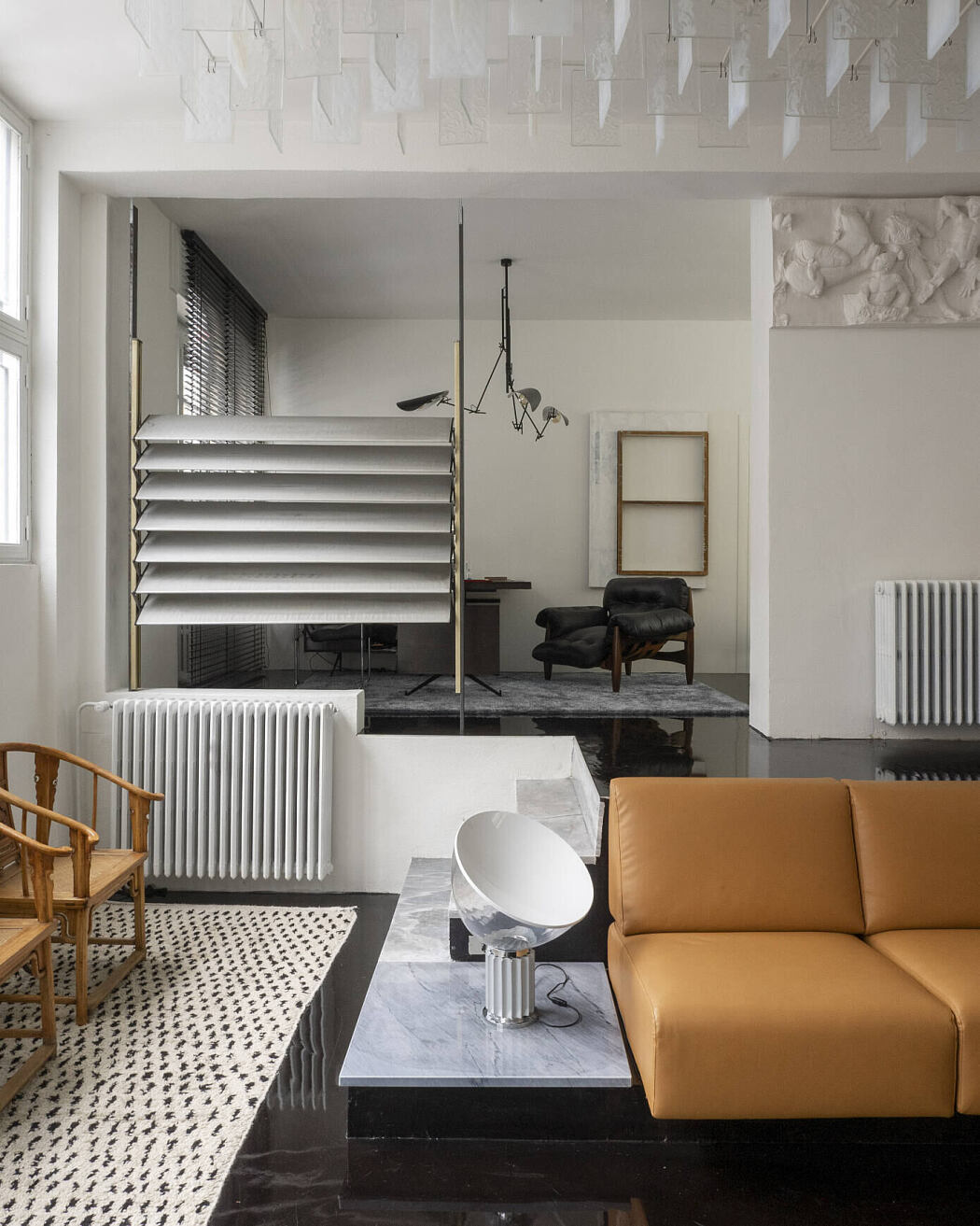 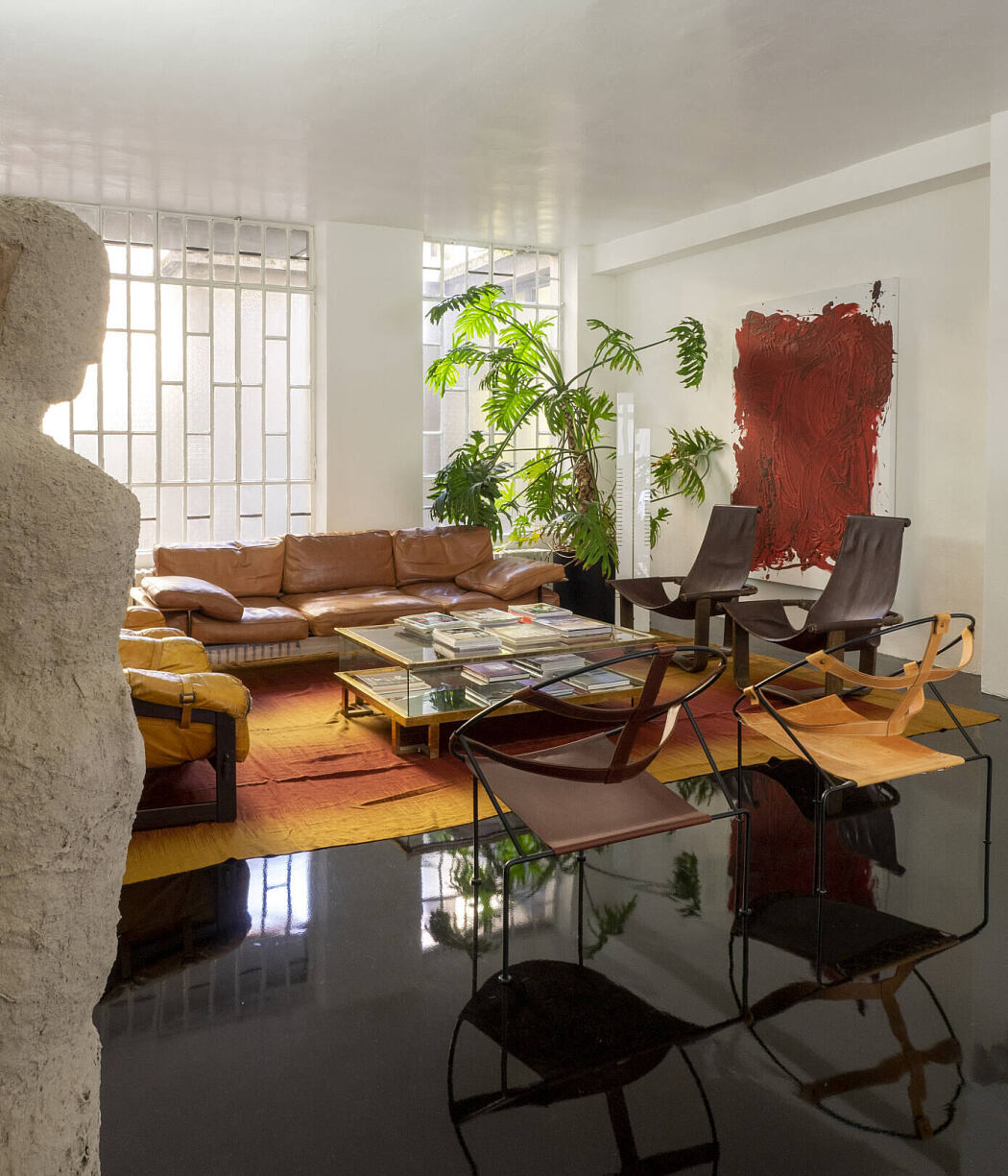 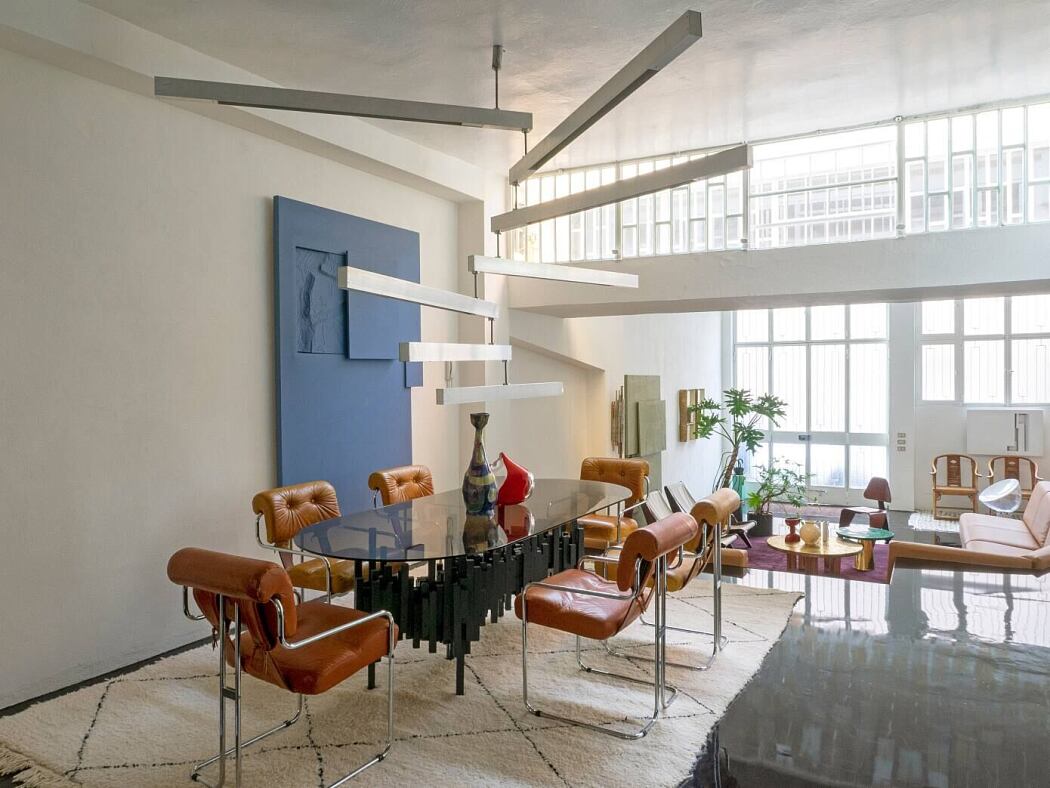 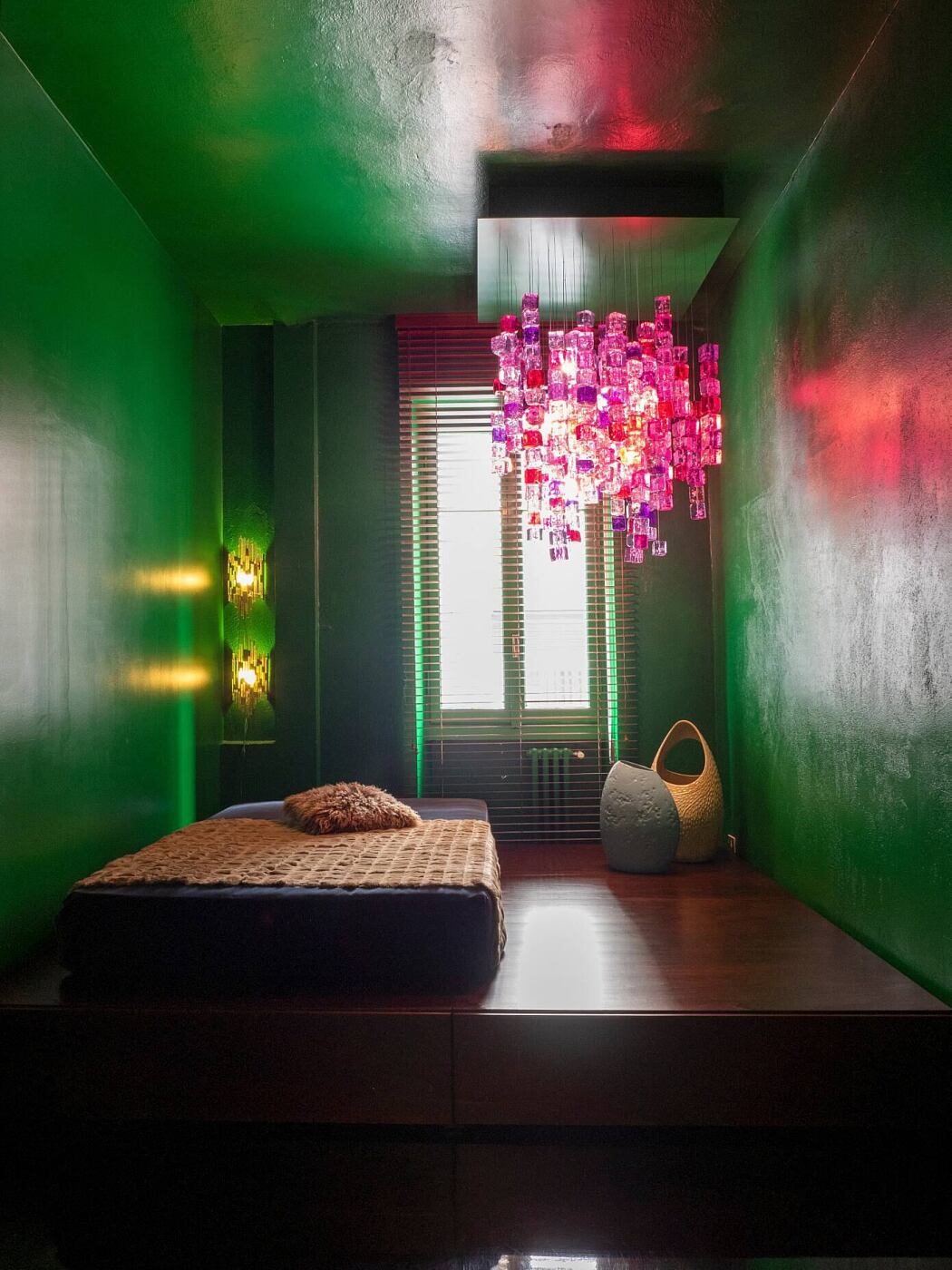 This apartment atelier is what the architect Hannes Peer calls his personal refuge. He searched for it for over 3 years before finally finding it. The space, a former typography, over the years and through different business owners has been a typography, a beauty salon and at last a massage therapy center with more than 20 small rooms subdivided by an infinite number of walls. The potential of the architectural space was barely visible when he saw the space for the first time, his best friends thought him crazy when he took the place to make it finally his own. Being an architect with a good experience with industrial era constructions in Milan and a certain sculptural vision in mind, tabula rasa like he tore down over 50 walls creating a two leveled airy open space with skylights and oversized windows.

The space has become multifunctional in order to satisfy the architect’s meaning of spatial use. It is first of all an apartment, a living space, then an atelier space. One has to know that living and working for Hannes Peer is all about the same, both intertwine constantly in his life, for this exact reason he has created this space around him, a space where he can put all his creativity at work, from architecture to interior design to building his own design prototypes and his sculptural paintings whenever some freetime allows it.

The floor plan of this particular space acts as an organized rectangle divided into six sections: a vestibule with lounge area (living room 1), living room (2), an atelier space, a studio, a small kitchen and a bedroom. The space encompasses some of the most fundamental aspects of the International Style modernism principles such as an open and flowing layout, flat roof, thick concrete walls, visible structures and full-height-glass walls. The single spaces have each a unique personality. The rooms are filled with pimping finishes, eclectic elements and textiles that feature vibrant colours and playful patterns, creating an eclectic union between a very sculptural and rigorous architecture and rather more decorative interiors. The interior design aims to create a spectacular yet atmospheric experience, it purposely reminds of the bold postmodern era feeling of New York loft apartments designed by Joe D’Urso or Alan Buchsbaum. The floors of the vestibule and living area are covered in glossy ebony colored resin of a sort not usually associated with residential design contrasting its dark hue and glossy texture with the grey-green Bardiglio marble stairs opening their way through the conversation pit, opaque white walls, a sculptural drooping skylight, smooth high-gloss white paint ceiling perfect the lofty feeling. This seemingly monochrome color palette is brightened up by several bold colored chinese art deco carpets, the sculptural paintings in pigeon blue and olive green made by the architect himself.

The conversation pit in the entrance to the apartment pays hommage to the tradition of modernist american architectures such as the Miller House designed by Eero Saarinen. It is a communal seating area recessed into the dark brown resin floor, lined with camel coloured leather banquettes. The conversation pit is a vivid, era-defining image transcended into pop consciousness and here re- contextualized by the architect as a modern time vestibule. Hovering over this conversation pit is a 16 square meter glass chandelier with transparent and opaline glass petals, designed by Hannes Peer and handcrafted by ‘Ermes-Bespoke Glass’ in Murano. This massive chandelier is tête-à-tête with a plaster bas relief from the Parthenon fries by Fumagalli&Dossi, official suppliers of the Brera art academy. Also several neoclassical elements are to be found throughout the project, these elements rather aim to defuse than to intellectualize the project. A brutalist Poliarte wall sconce is placed right next to two vintage Giò Ponti wall sconces of the ‘Finestre’ series designed for Arredoluce.

Already visible from the vestibule is the dining area, the spatial fluidity and continuity is definitely a typical trademark for this open floor plan apartment. The dining area’s sculptural table, a selfmade prototype of Hannes Peer, becoming the center of focus while passing through, is surrounded by chrome-framed chairs designed by Guido Faleschini for Mariani. These particular chairs, only few may know it, adorn also the dining room of John Lautner designed Goldstein House in Los Angeles, one of the Hannes Peer’s all time most iconic spaces he was able to witness with his own eyes while visiting the city of angels. A monumental kinetic light sculpture, a prototype by the architect and another one of the architects sculptural paintings, in pigeon blue, complete the dining room area.

The living room as a backdrop has a monumental curtain wall in sandblasted glass which was restored entirely and brought to its former beauty. To the right the living room is framed by a faux postmodern fireplace designed by the architect that features two rare 80’s ‘Shogun’ sconces from Artemide, to the left we find a concrete lifesize sculpture by artist Ursula Huber just in front of a curved Arturo Vermi ‘cut’ painting in gold leaf of 1976. The Diesis 3-seater couch conversates with Percival Lafer leather chairs in rosewood and orange leather upholstering, two Manta lounge chairs by Ingmar Relling for Westnofa and a massive french glass coffee table from Maison Jansen. Several paintings, textiles and carpets feature vibrant colours and playful patterns. Here and there we find rather exotic sculptures, from african wooden masks and tables to small bronze sculptures made by Oreste Dequel to italian ceramic sculptures of sorts. These pieces have been arranged in refreshingly unexpected combinations. This invites the visitor to engage with the space more intimately. Even though the space is grand in scale and gesture, this living space is nonethelss understood as a series of human scaled vignettes. This has much to do with the richness of the palette, silk rugs, oxidised metals, aged timbers, glossy table surfaces and textural artwork. The opulence of these textures mixed with the drama of the natural lighting imbue this space with a sense of theatre.

The suspended 3-arm ceiling light is a lamp prototype designed by Hannes Peer. The atelier space is directly comunicating with the atelier space where the architect builds his wooden design prototypes and paintings. This double function has its profound meaning in the fact that the architect while designing mostly on the computer can always envision (long for) his grandfather’s wooden work table that he brought from South Tyrol, his place of birth.

The kitchen by his own volition is kept to a minimum in size, the architect wanted to give maximum emphasis on what he considers his living spaces rather than to a space that he barely uses due to his hectic time schedule. For his clients he designs grand kitchens, for himself he wanted an honest kitchen, an ‘Existenzminimum’ kitchen, such one as Le Corbusier built in his cabin.

The bedroom is defined by its bold colors, from the emerald green glossy walls, to the mahoganized footboard that raises the bed from the ground to the chandelier of Jacoppo Foggini in metracrilate from red to purple to violet shades and the Poliarte wall sconces and several ceramic sculptures and vases.