Armadale Residence II by was originally built at the turn of the century as one of three identical grand residences. Refreshed by a renovation to suit the current residents’ modern familial needs, the Melbourne home is an elegant example of cohesive design, respectfully balancing heritage features with a contemporary vision. 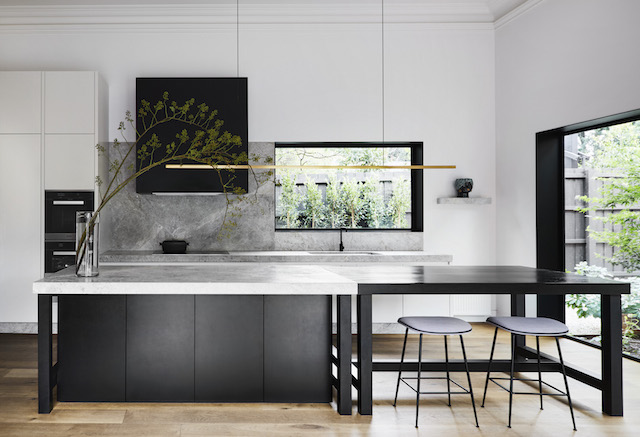 Engaged initially to design bespoke joinery, Studio Tate’s simple but sophisticated alterations illustrated such improved amenity that they were tasked with extending the life and function of the entire four bedroom, three bathroom family home.  A result of thoughtful spatial planning, the new layout fosters harmonious coliving as children evolve into young adults – the reconfiguration reflective of the need for designated spaces that effortlessly transition. 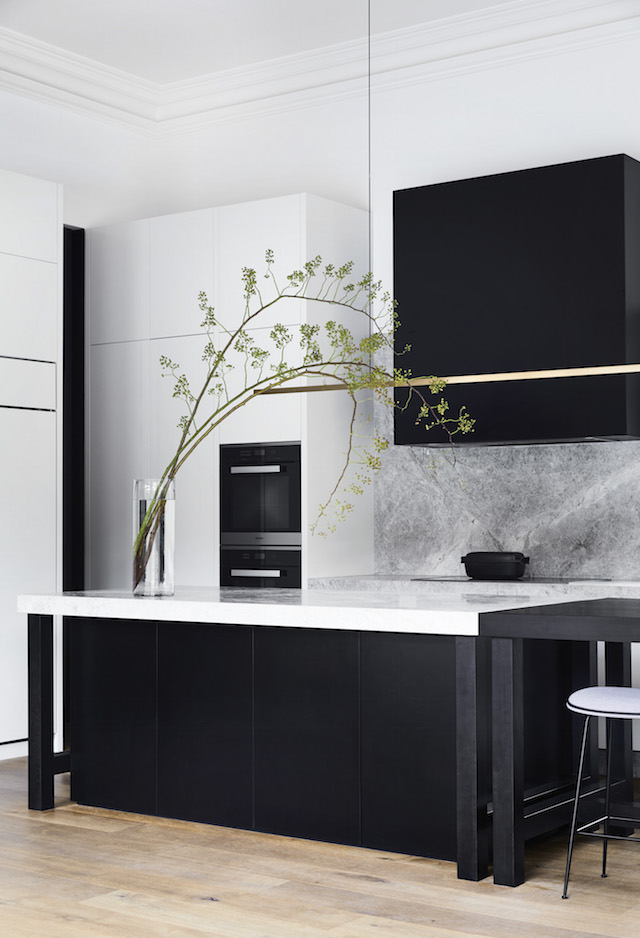 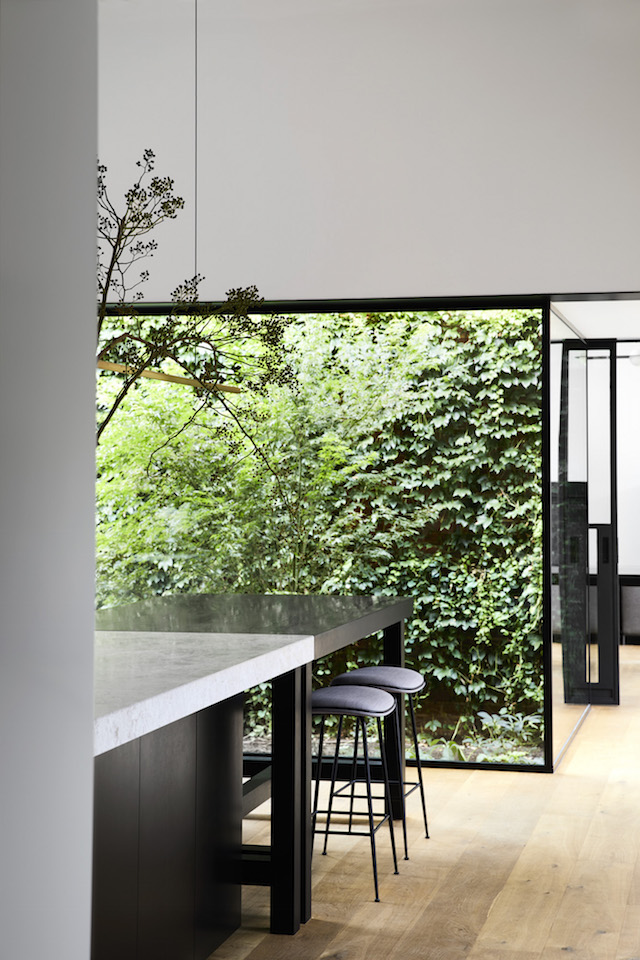 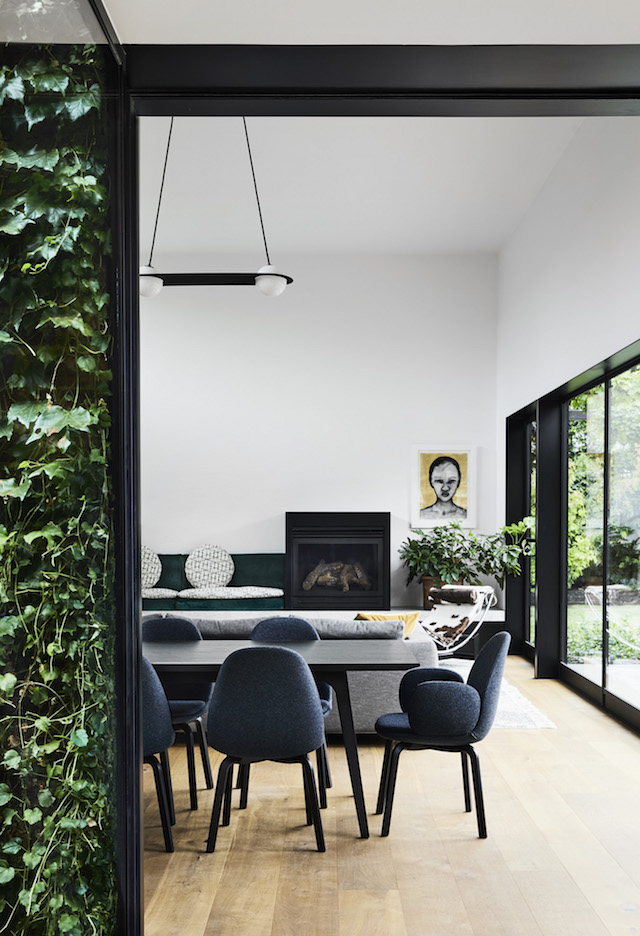 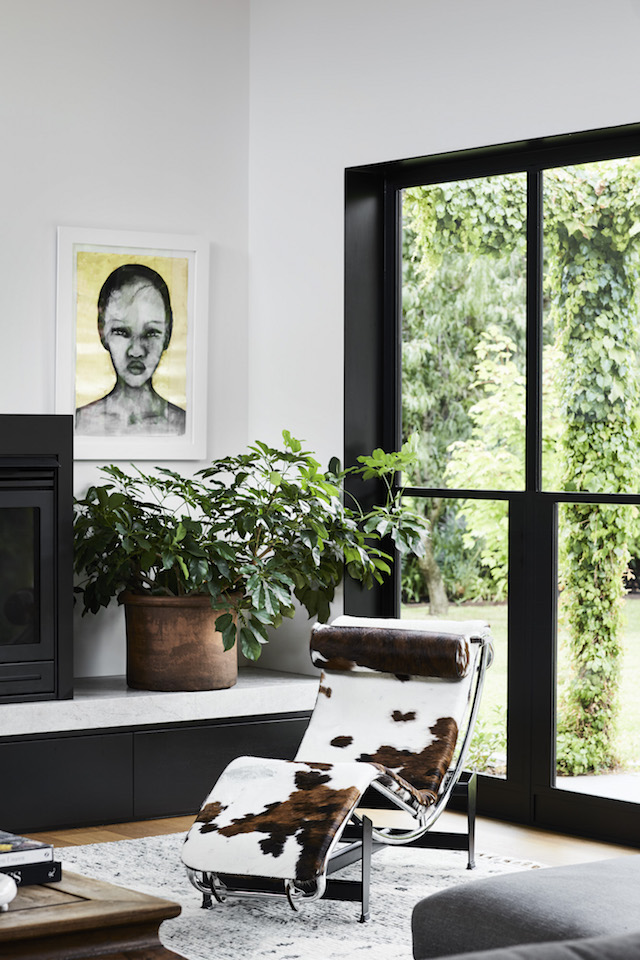 Victorian period mouldings, picture rail datum and parquetry flooring create a sense of formality which informed Studio Tate’s design narrative. The stately heritage façade, grandiose entry hall archway and geometric motif ceilings inspired a mirrored symmetry that echoes throughout. Visitors are welcomed by contemporary design elements that breathe new life into the traditional stained-glass framed entry and invokes a cohesive warmth. The considered placement of unexpected furnishings and joyful pops of colour marry the interior with the intricate heritage windows – a feature to be celebrated. 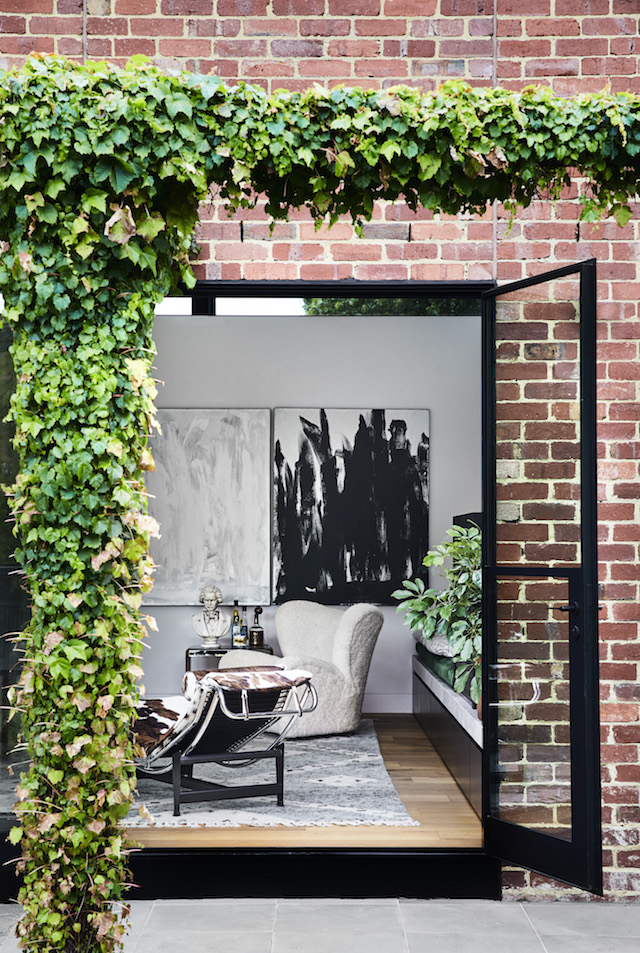 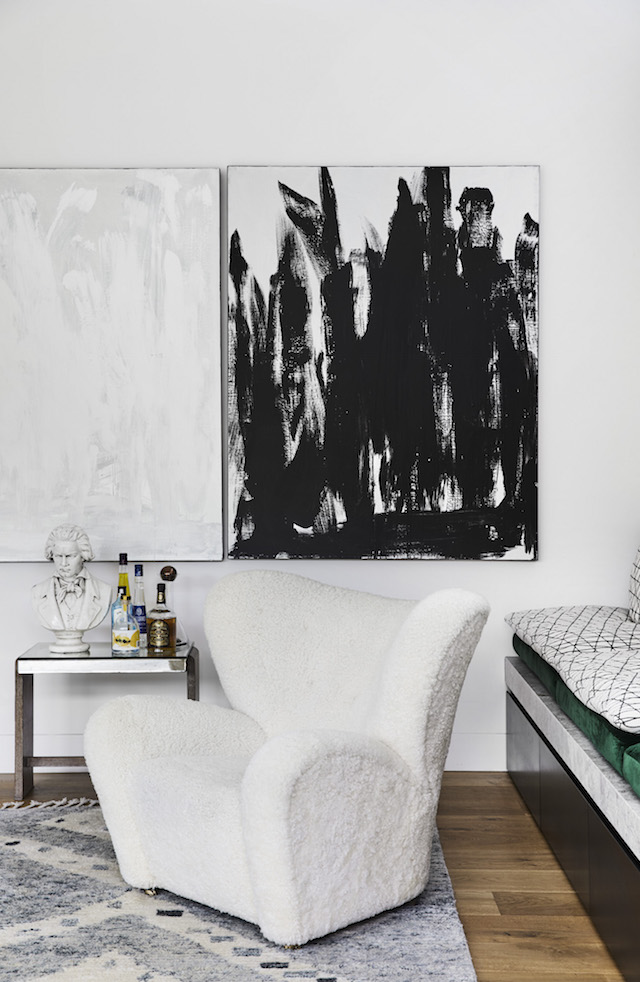 A monochromatic palette throughout acts as a crisp canvas to hero contemporary artwork and freestanding objet d’art, while a refined materiality is buoyed by playful textural choices. In the lounge, the curvaceous riffs off the tactility of the adjacent artwork and teal velvet banquette. The cowhide Le Corbusier lounge provides a playful graphic interruption to the tranquil space, grounded by warm timber and greenery.
Expansive dining and living zones encourage open, convivial interaction and find a balance between formal dining and more intimate breakouts for casual congregation. Freestanding joinery and uniform framework in the large stone kitchen, as well as striking steel framed doors, are contemporary nods to existing shuttered windows. The extended island bench sits adjacent to steel framed windows, offering connection to the lush foliage of the reconfigured arbour by . Perfect for informal midweek meals, this casually inviting space is a family favourite to gather and connect at the end of a busy day. 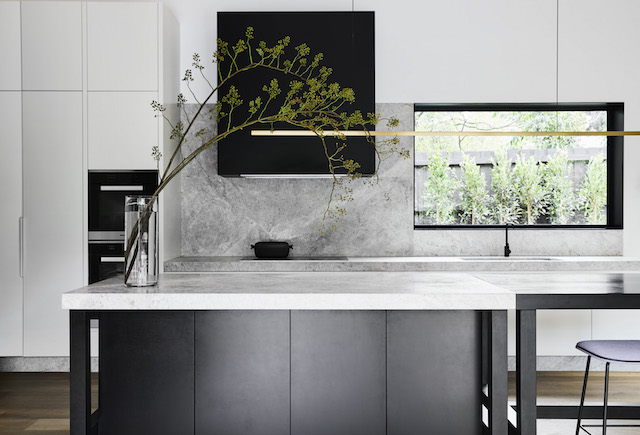 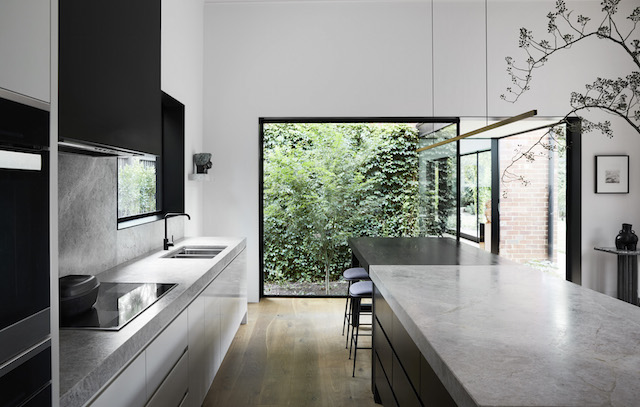 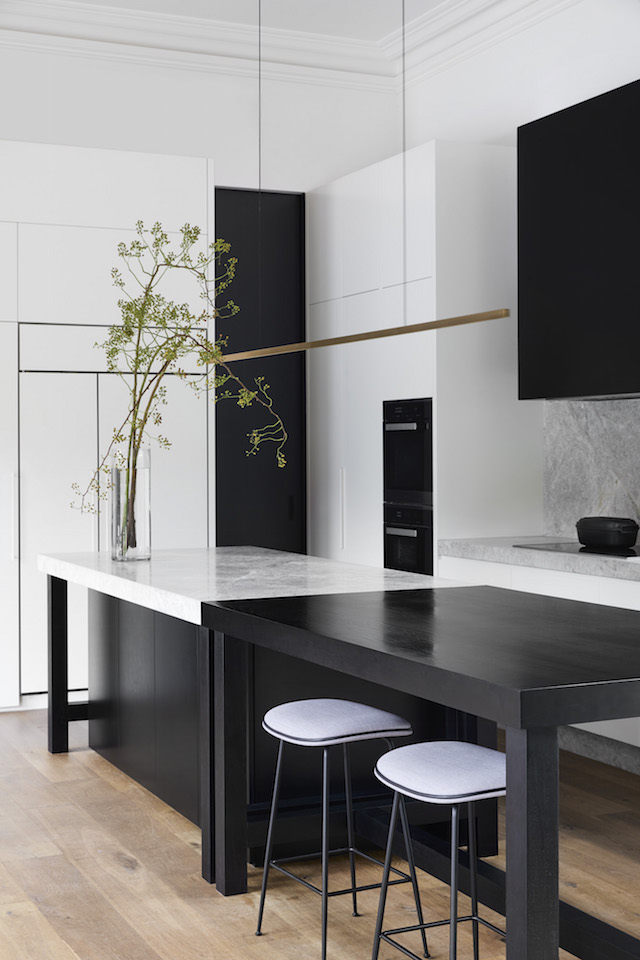 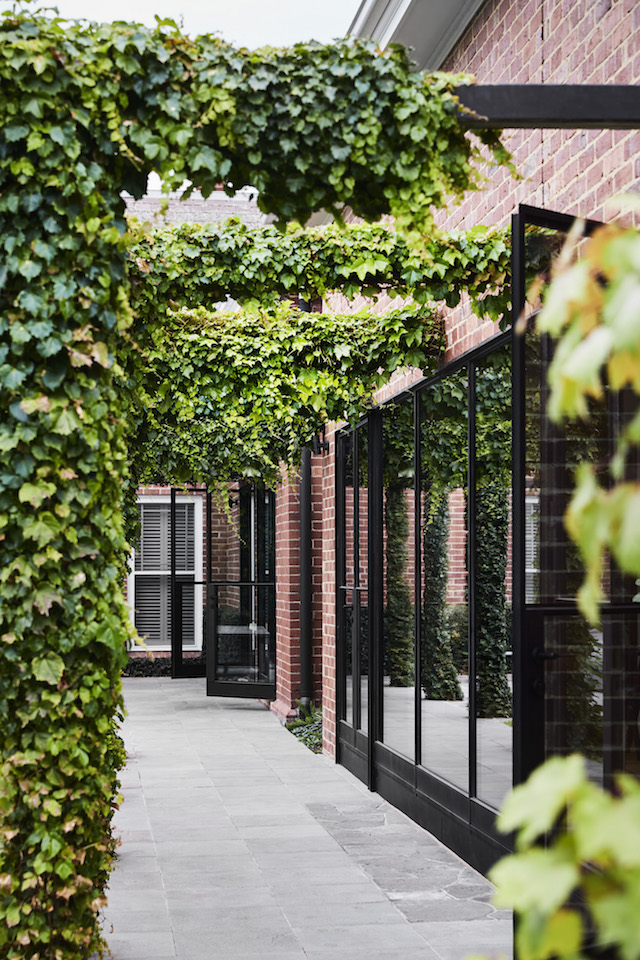 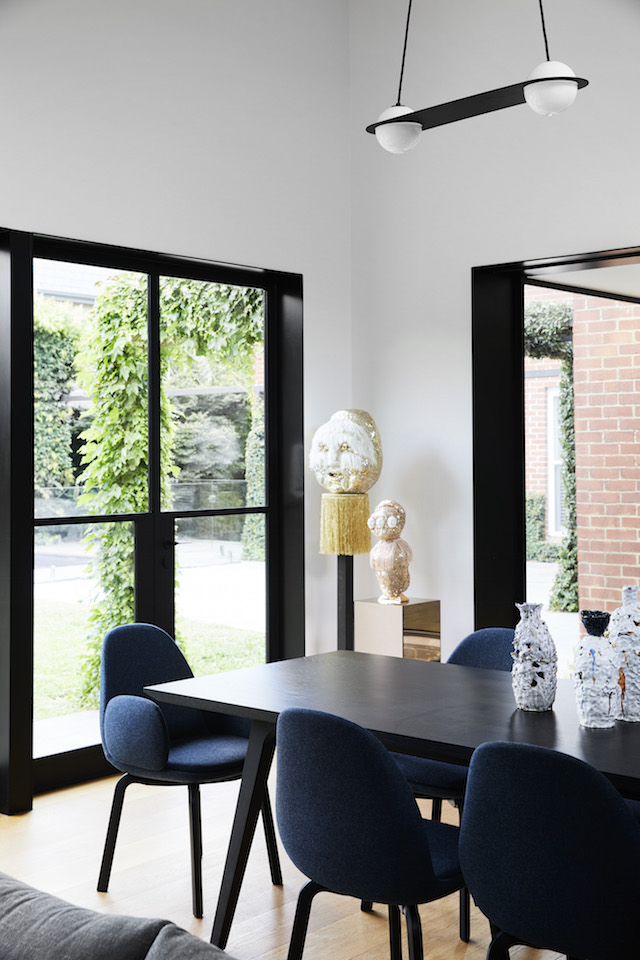 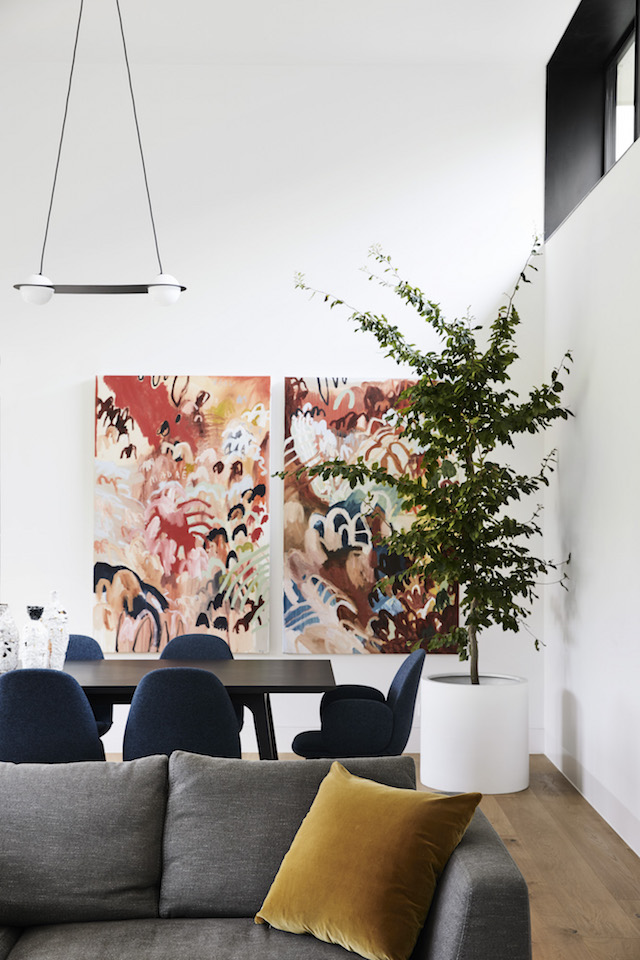 Along with a refresh of the existing bones, Studio Tate implemented two key architectural gestures to fuse the past and present.  The original rear tack room for housing saddle supplies is now linked to the main house via a new glass walkway, and an extension to the northern side of the home allows for the addition of an ensuite with dual access from each of the teenagers’ bedrooms.
A concealed steel framed sliding door at the rear of the new glazed link means the new dining and living zone in the former tack room can be separated if required, while communal spaces are offset by delineated zones such as the separate study for respectful seclusion and new powder room. 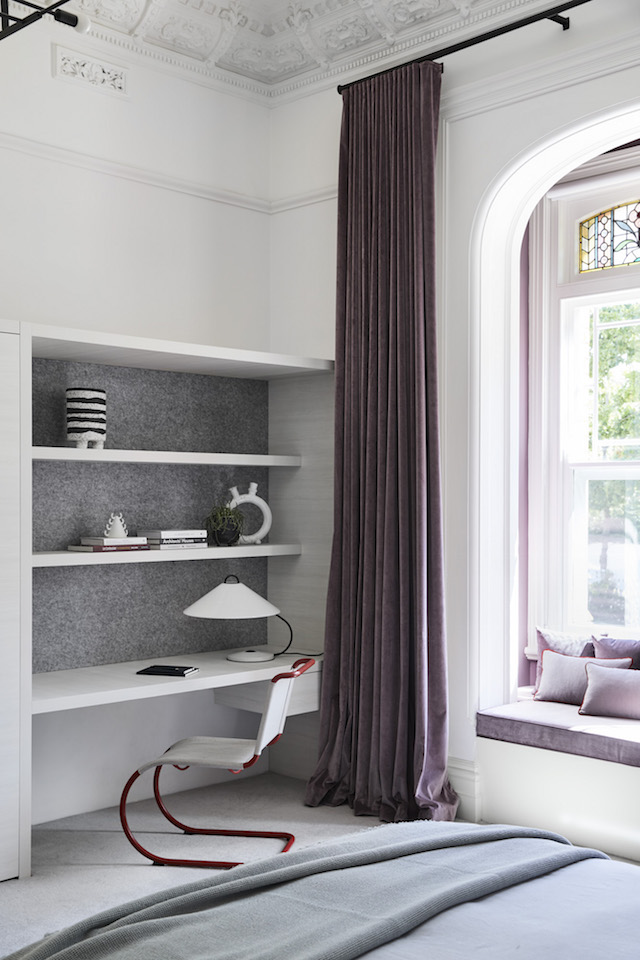 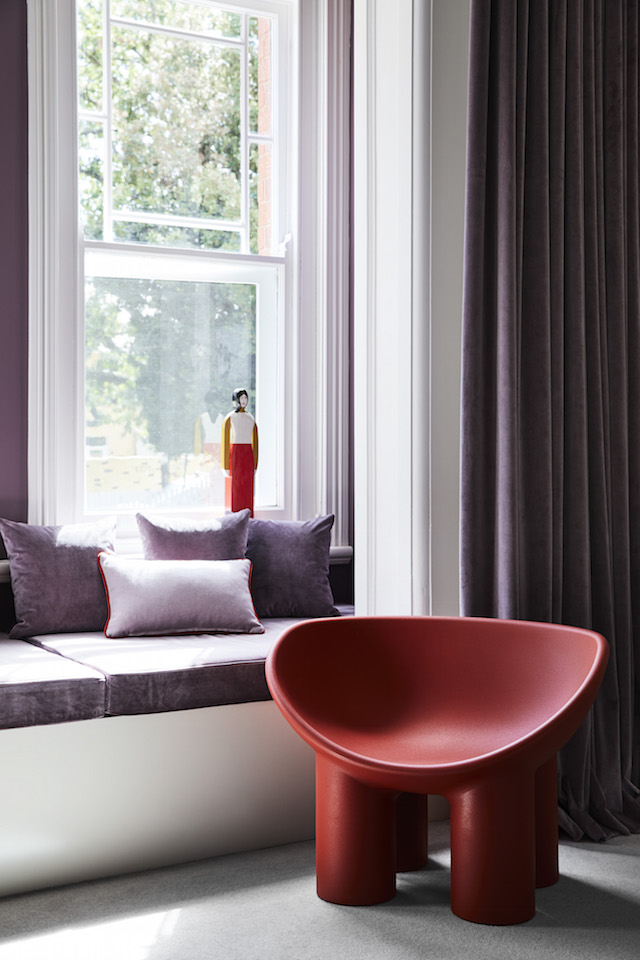 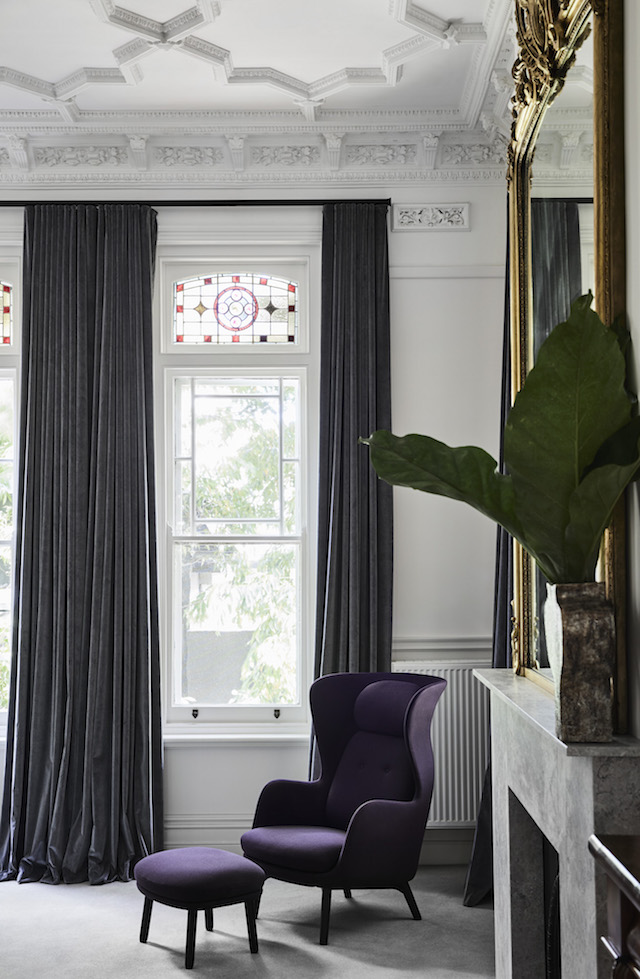 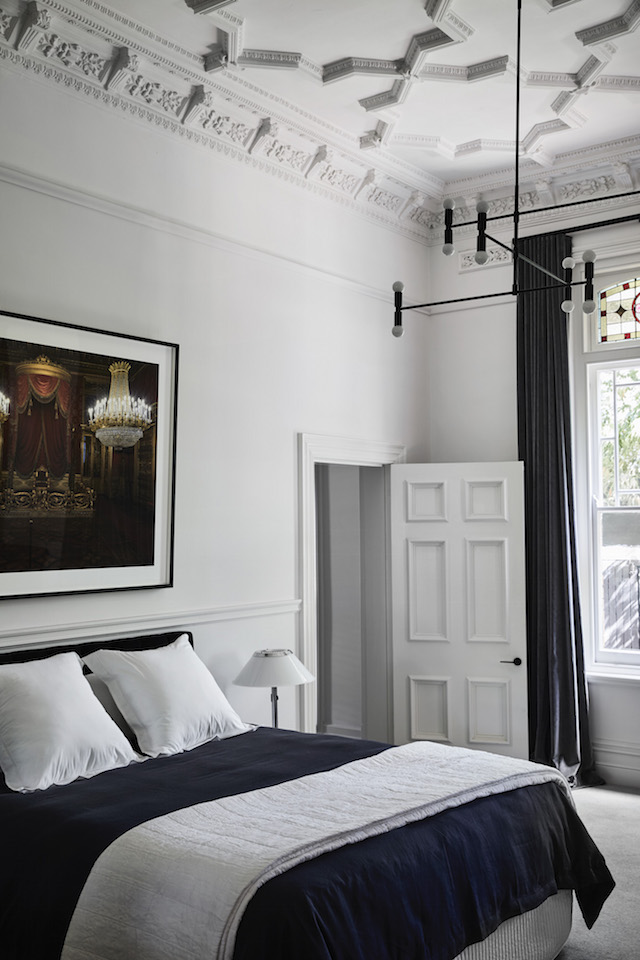 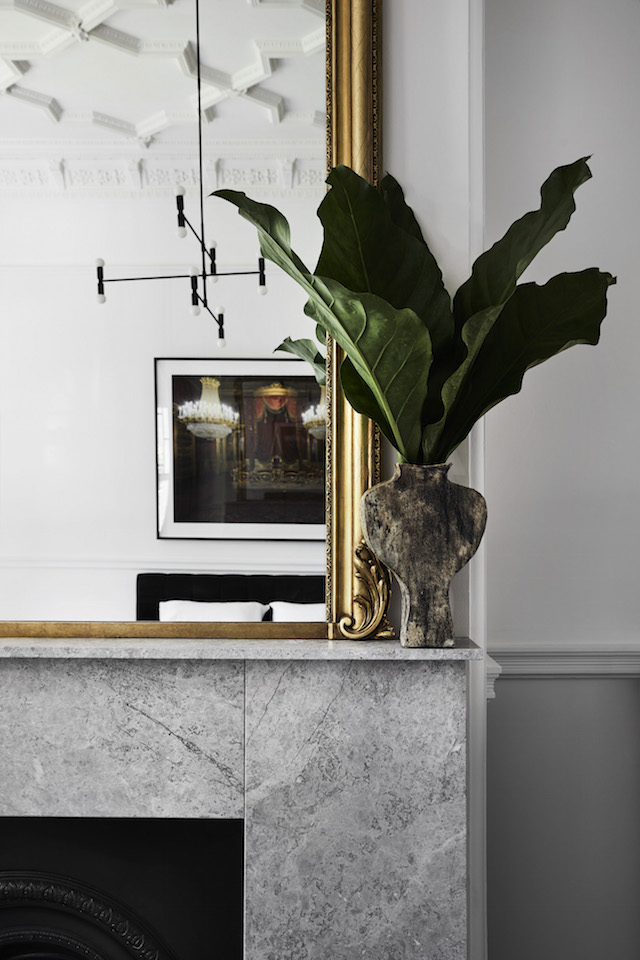 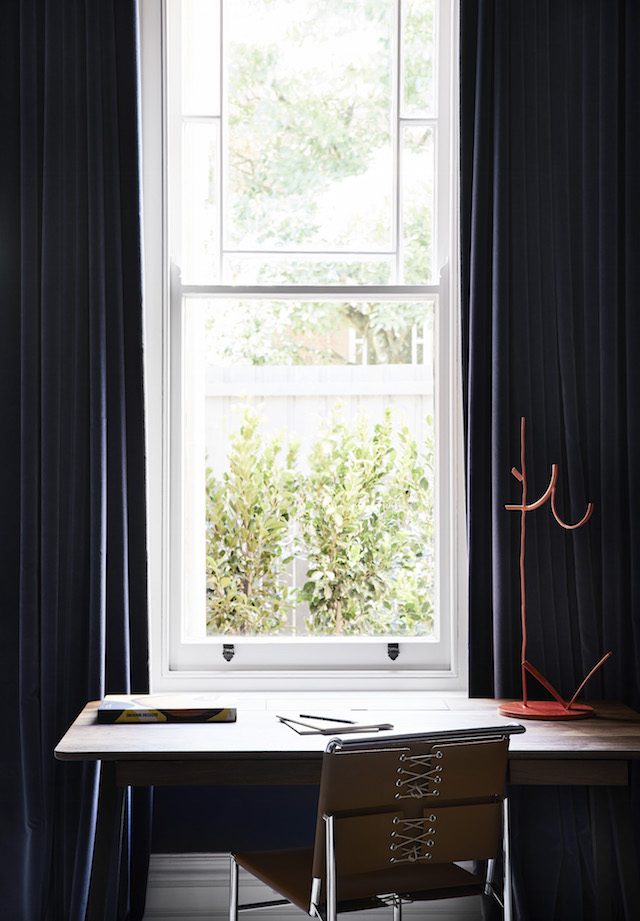 With a depth of colour and tactility that entices, the bedrooms’ ornate ceilings are respectfully grounded with textural velvet drapes that pair back to the stained glass windows. Tonal nods throughout the home’s accent furnishings speak to the luxurious colourways and encourage a cohesive experience. 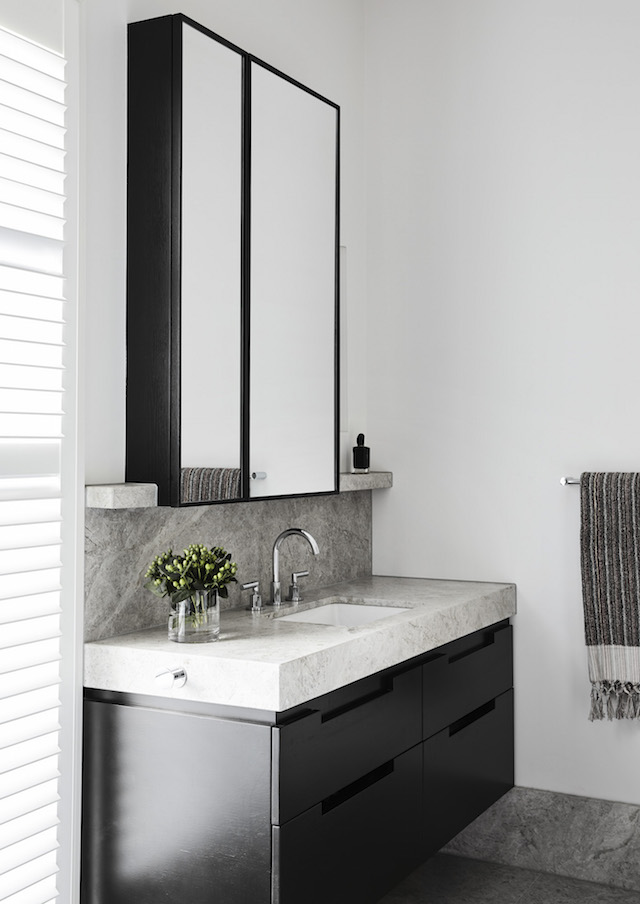 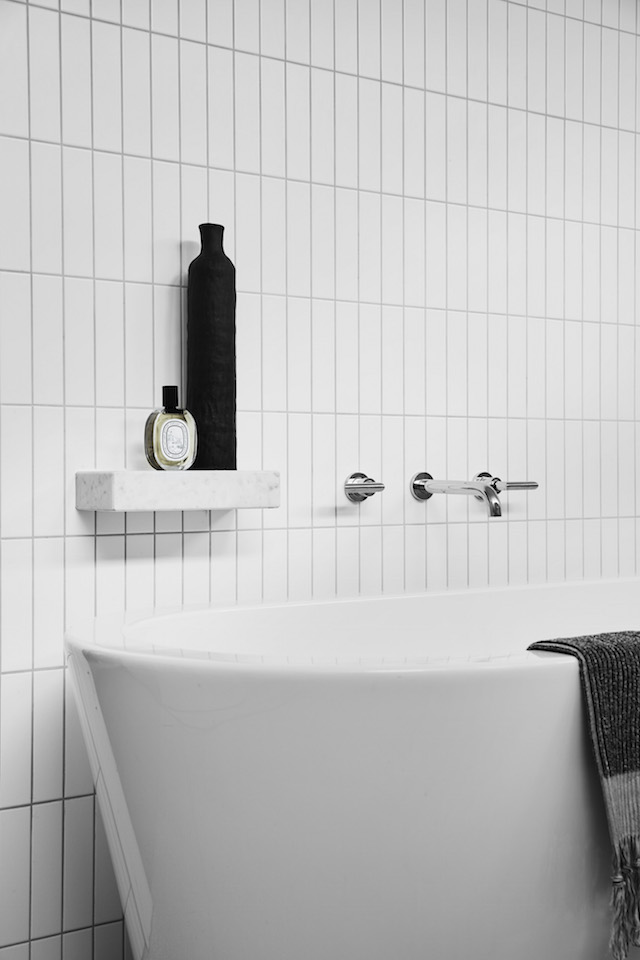 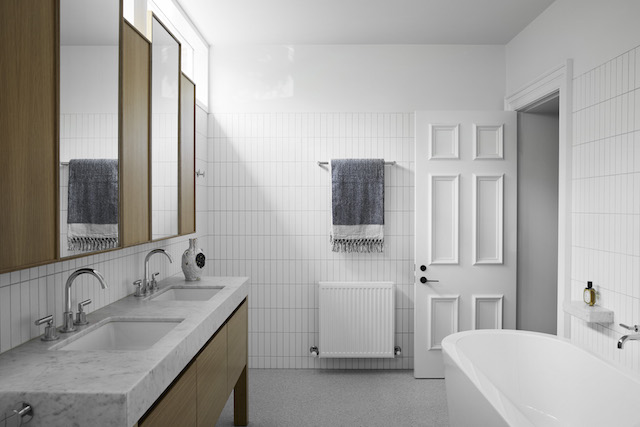 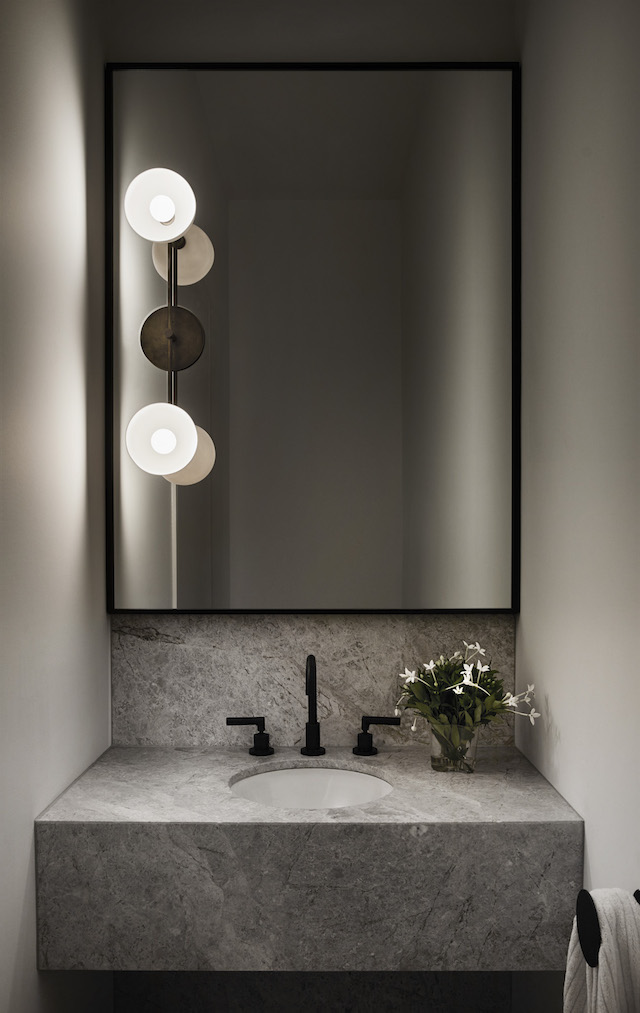 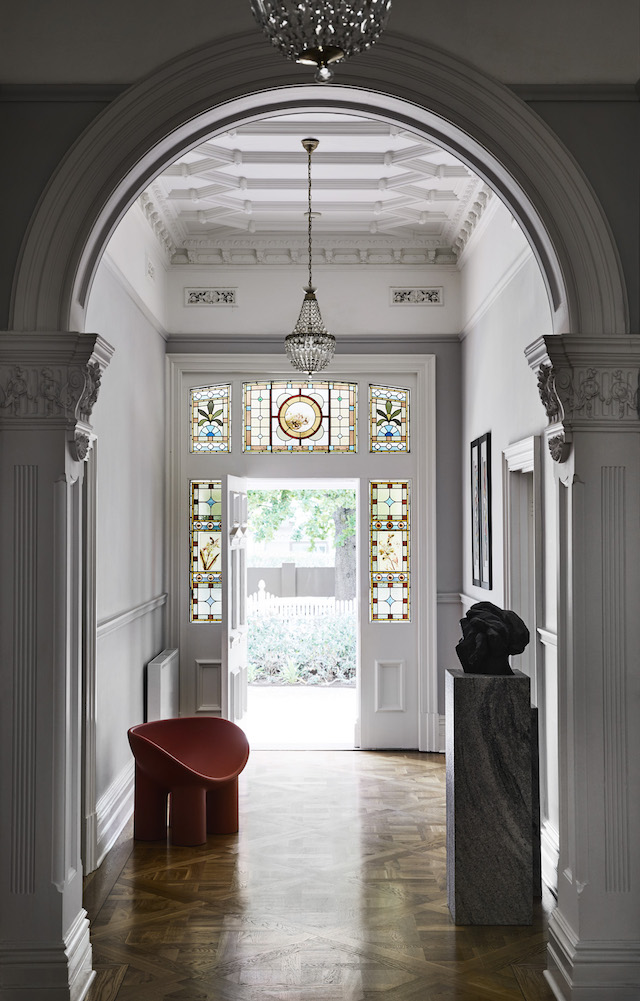 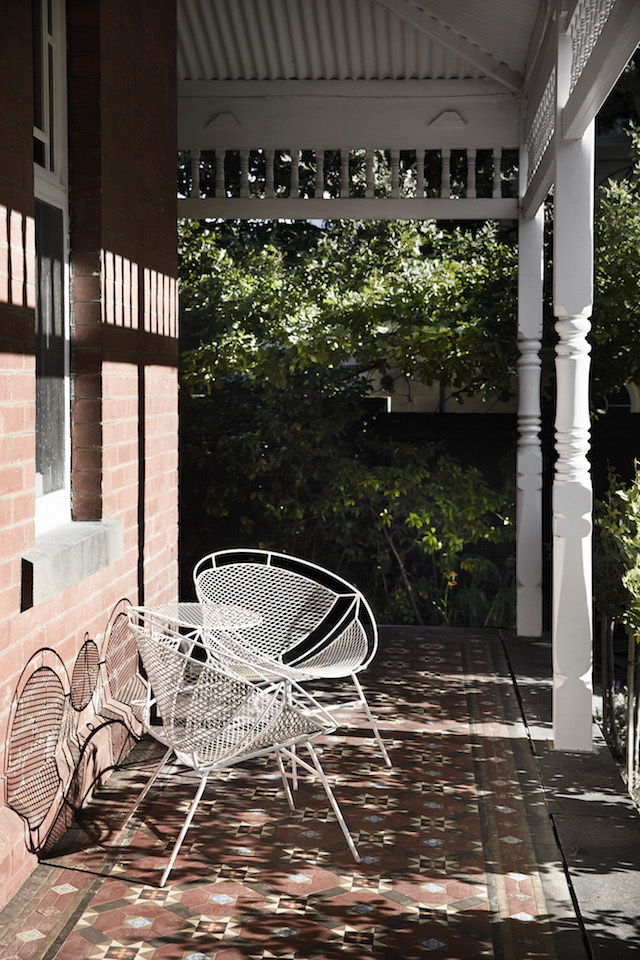 Design by / Build by  / Photography by
A nuanced, transitional family home that informs the new with the old and enlivens the past with the contemporary, Armadale Residence II reflects Studio Tate’s intelligent approach and is exemplary of the personalised realisation in which they specialise.
Images courtesy of Studio Tate