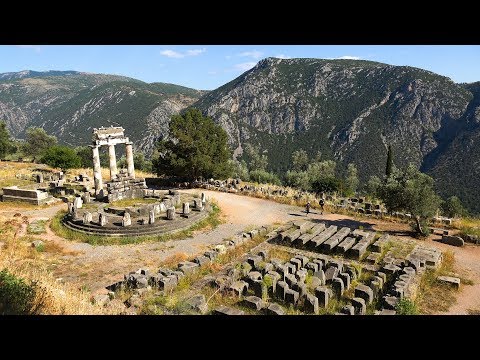 The Ancient Sites in Mainland Greece, where the history of the Western Civilization began …
Main sites in the video: Delphi (0:01), Olympia (1:40), Mycenae (3:10), Tiryns (4:12), Epidaurus (4:44), Acrocorinth (5:24), Corinth (6:25), Athens (7:11).
Couple of views from interesting nearby locations that do not belong to the ancient history: Galaxidi (1:36), Nafplio from the Palamidi fortress(4:28), Corinth Canal (6:56). The fortress at Acrocorinth is from Byzantine and later times, but Acrocorinth itself is the acropolis of ancient Corinth.

UNESCO World Heritage Sites in this video (all quotes from whc.unesco.org):

Delphi: “The pan-Hellenic sanctuary of Delphi, where the oracle of Apollo spoke, was the site of … the ‘navel of the world’. Blending harmoniously with the superb landscape and charged with sacred meaning, Delphi in the 6th century B.C. was indeed the religious centre and symbol of unity of the ancient Greek world.”

Olympia: “In the 10th century B.C., Olympia became a centre for the worship of Zeus. The Altis – the sanctuary to the gods – has one of the highest concentrations of masterpieces from the ancient Greek world. In addition to temples, there are the remains of all the sports structures erected for the Olympic Games, which were held in Olympia every four years beginning in 776 B.C.”

Mycenae and Tiryns: “The archaeological sites of Mycenae and Tiryns are the imposing ruins of the two greatest cities of the Mycenaean civilization, which dominated the eastern Mediterranean world from the 15th to the 12th century B.C. and played a vital role in the development of classical Greek culture.”

Epidaurus: “Hellenic architectural ensemble of the 4th century BCE. The site is one of the most complete ancient Greek sanctuaries of Antiquity and is significant for its architectural brilliance and influence.

Acropolis, Athens: “The Acropolis of Athens and its monuments are universal symbols of the classical spirit and civilization and form the greatest architectural and artistic complex bequeathed by Greek Antiquity to the world.”

About Amazing Places on Our Planet:
Immerse yourself in scenic beautiful places on our planet without the distraction of words.
New 4K video every Friday or every second Friday.
Video footage can be licensed out by contacting me.