A Retreat Among the Peaks by ATOMAA

A Among the Peaks is a lovely stone house located in Varzo, Italy, designed in in 2020 by . 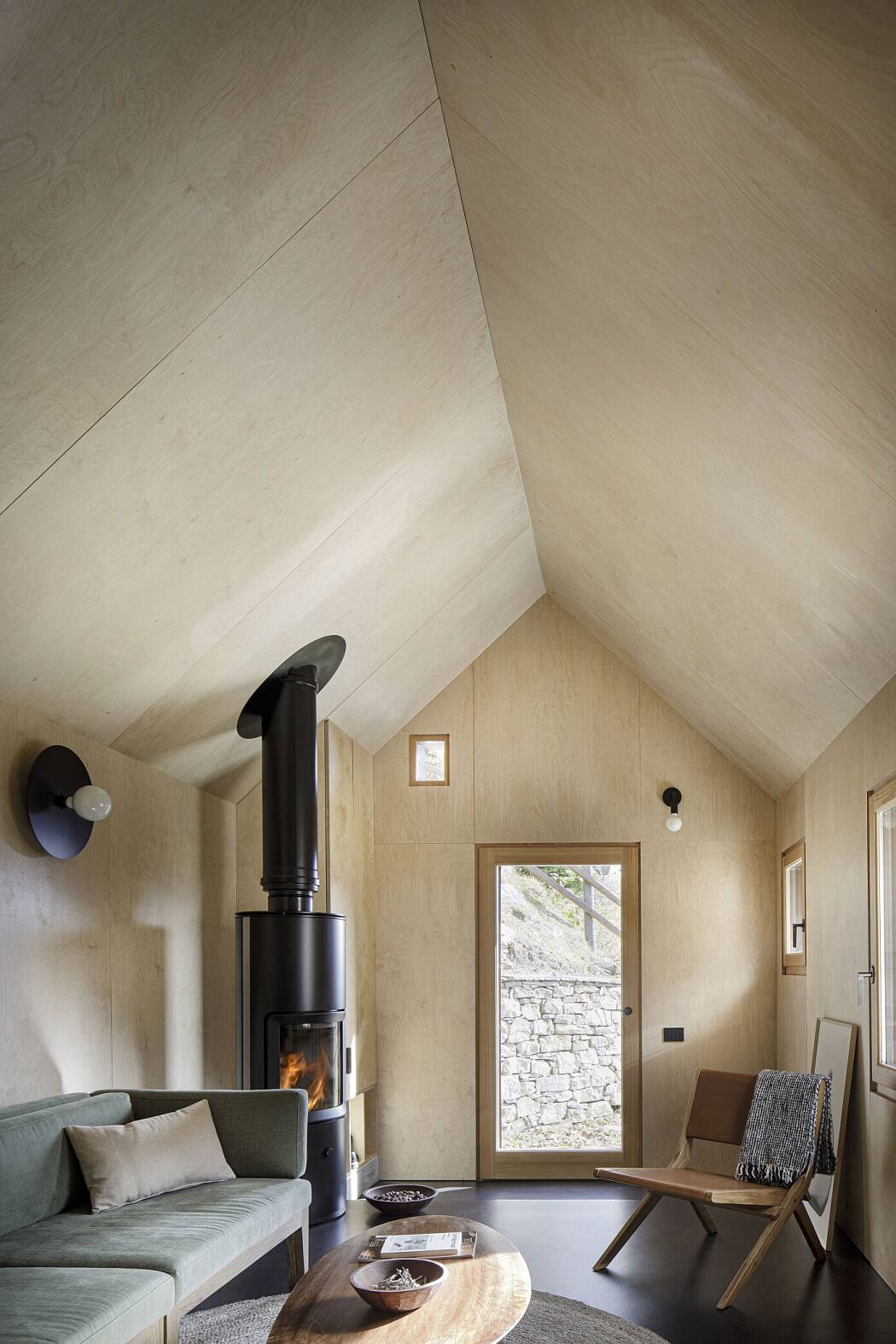 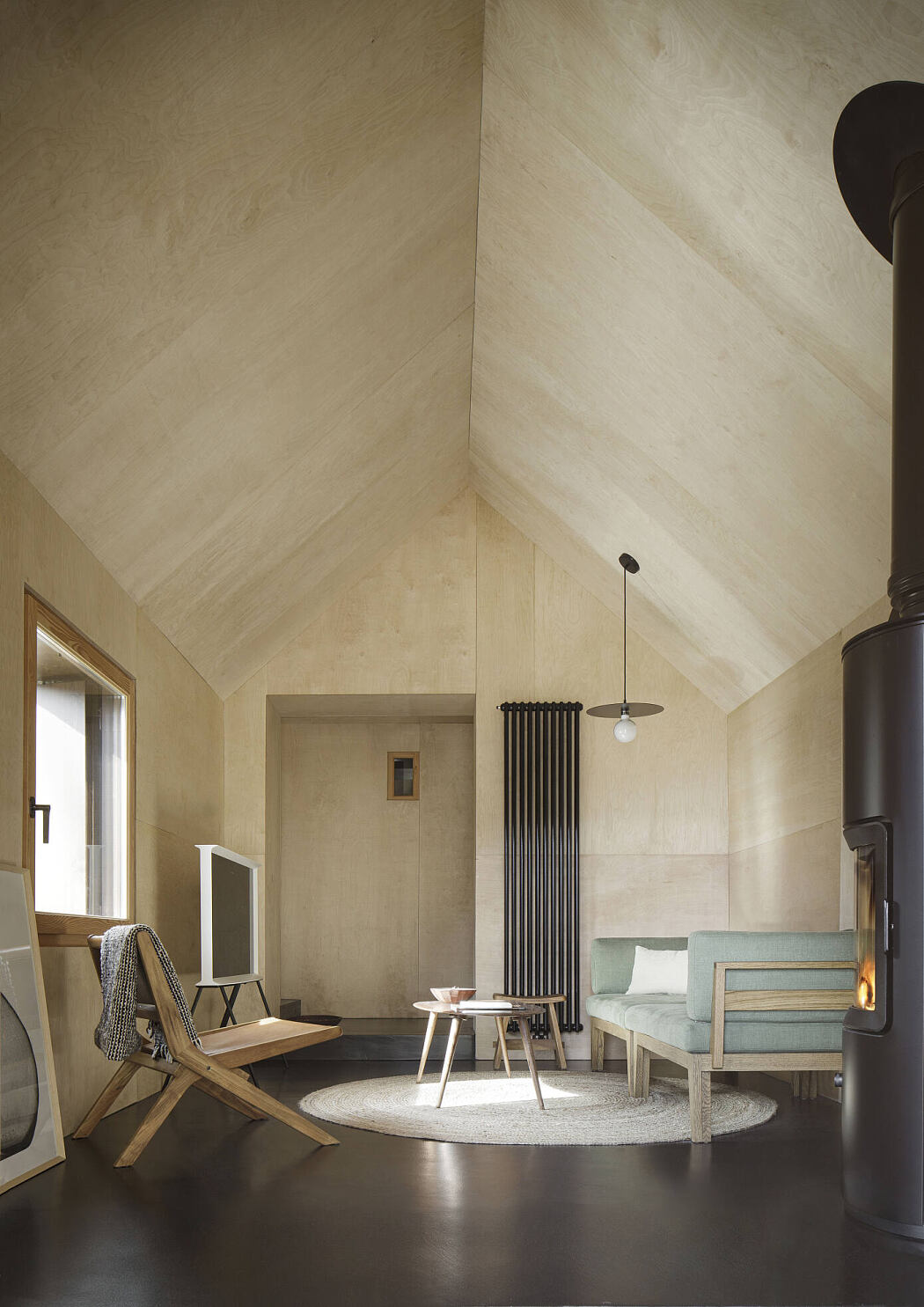 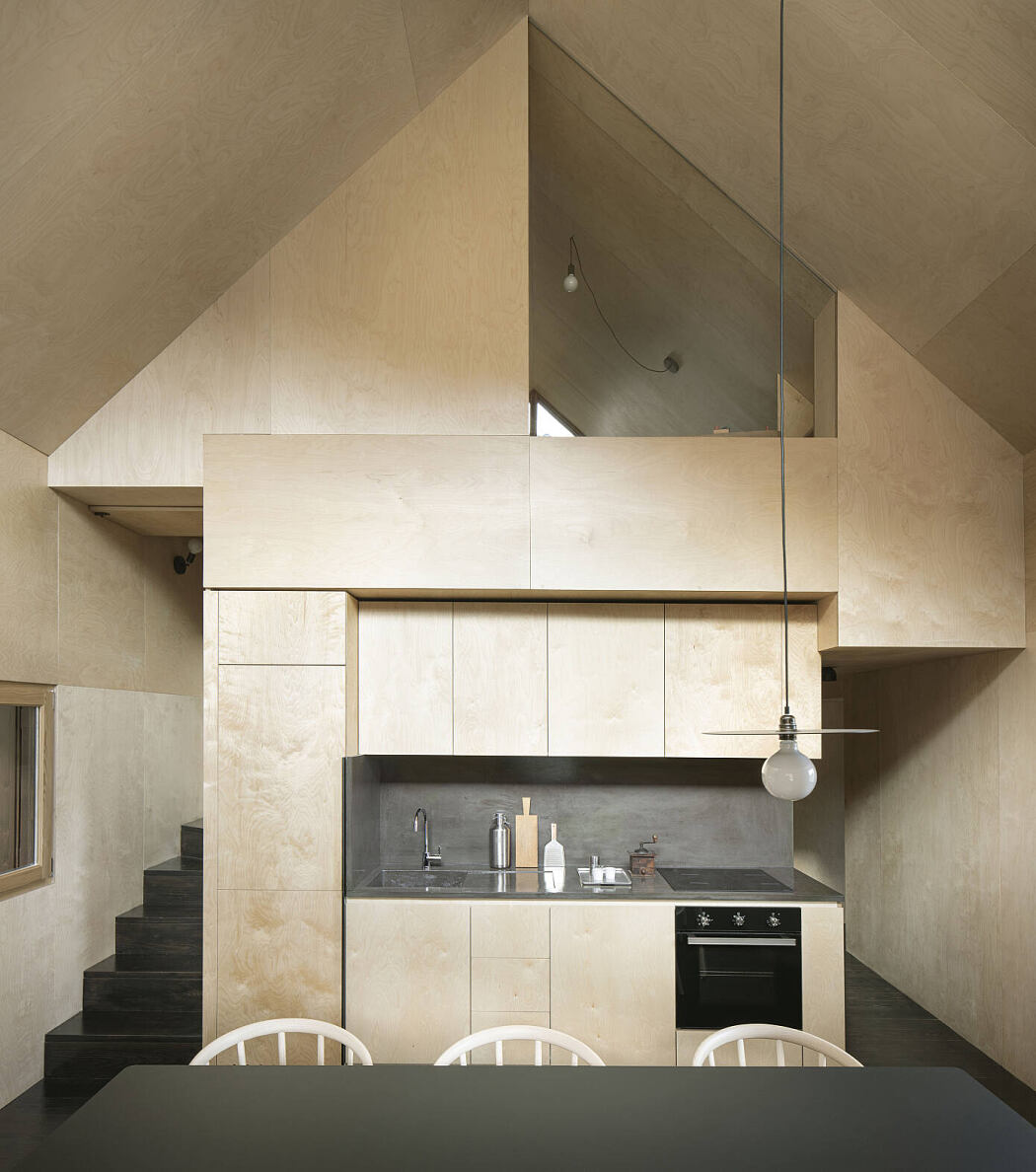 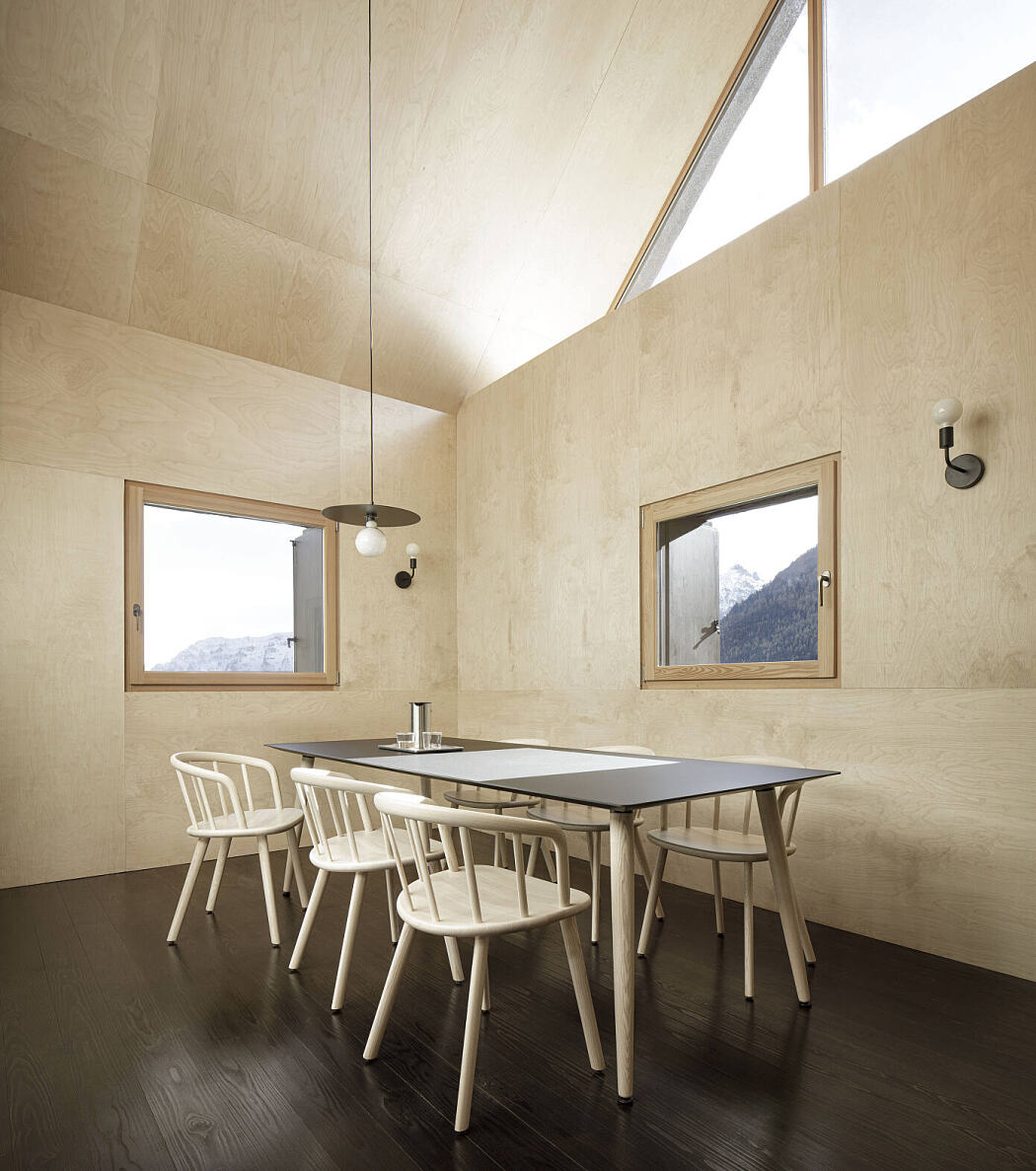 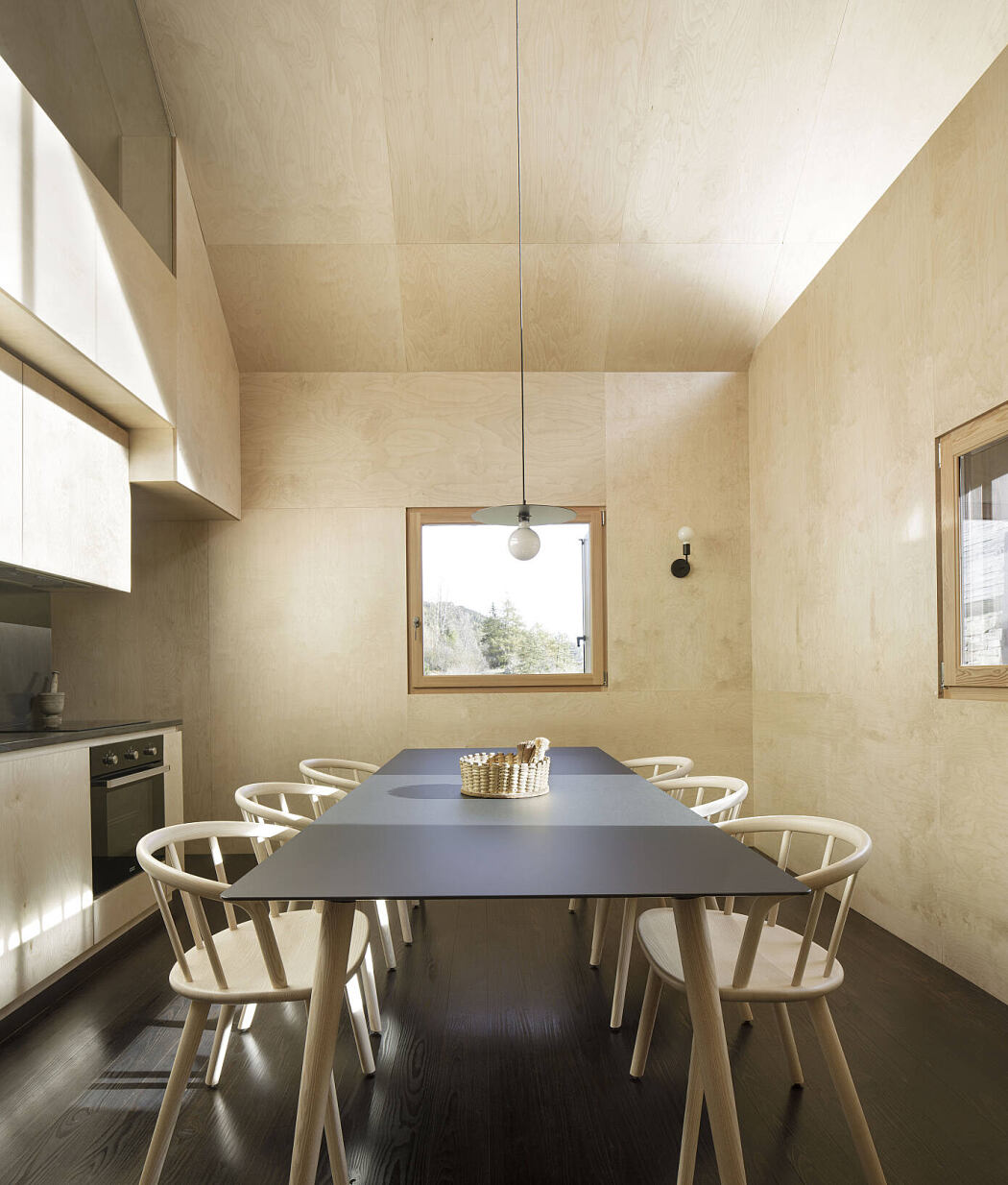 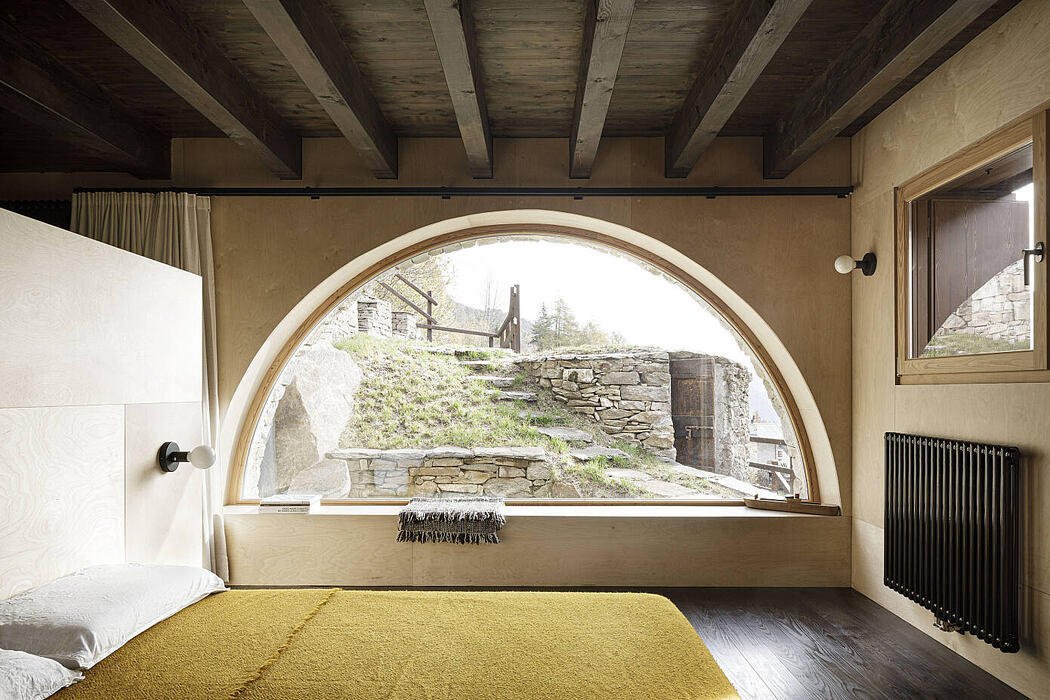 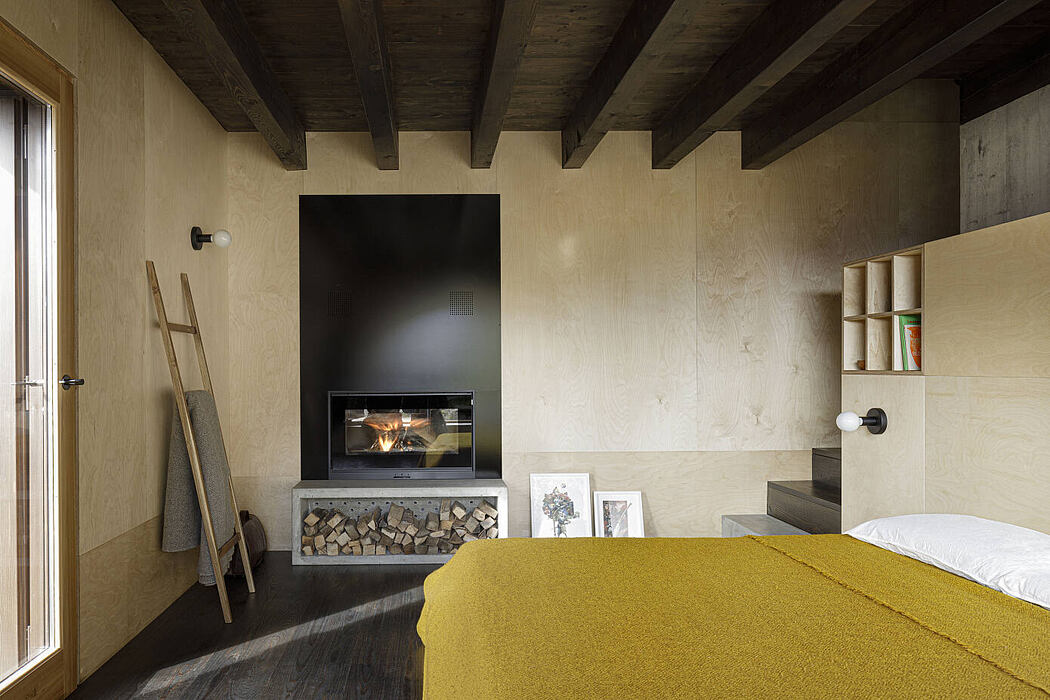 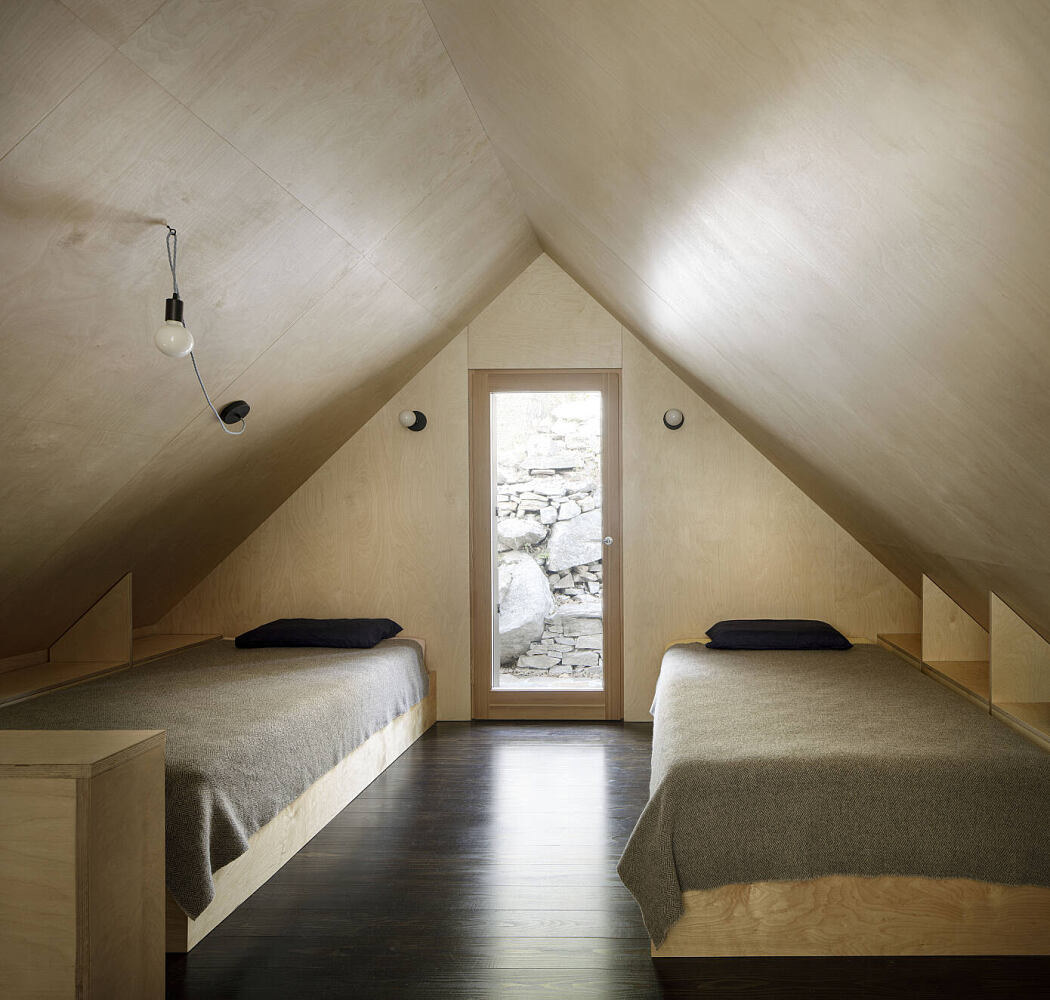 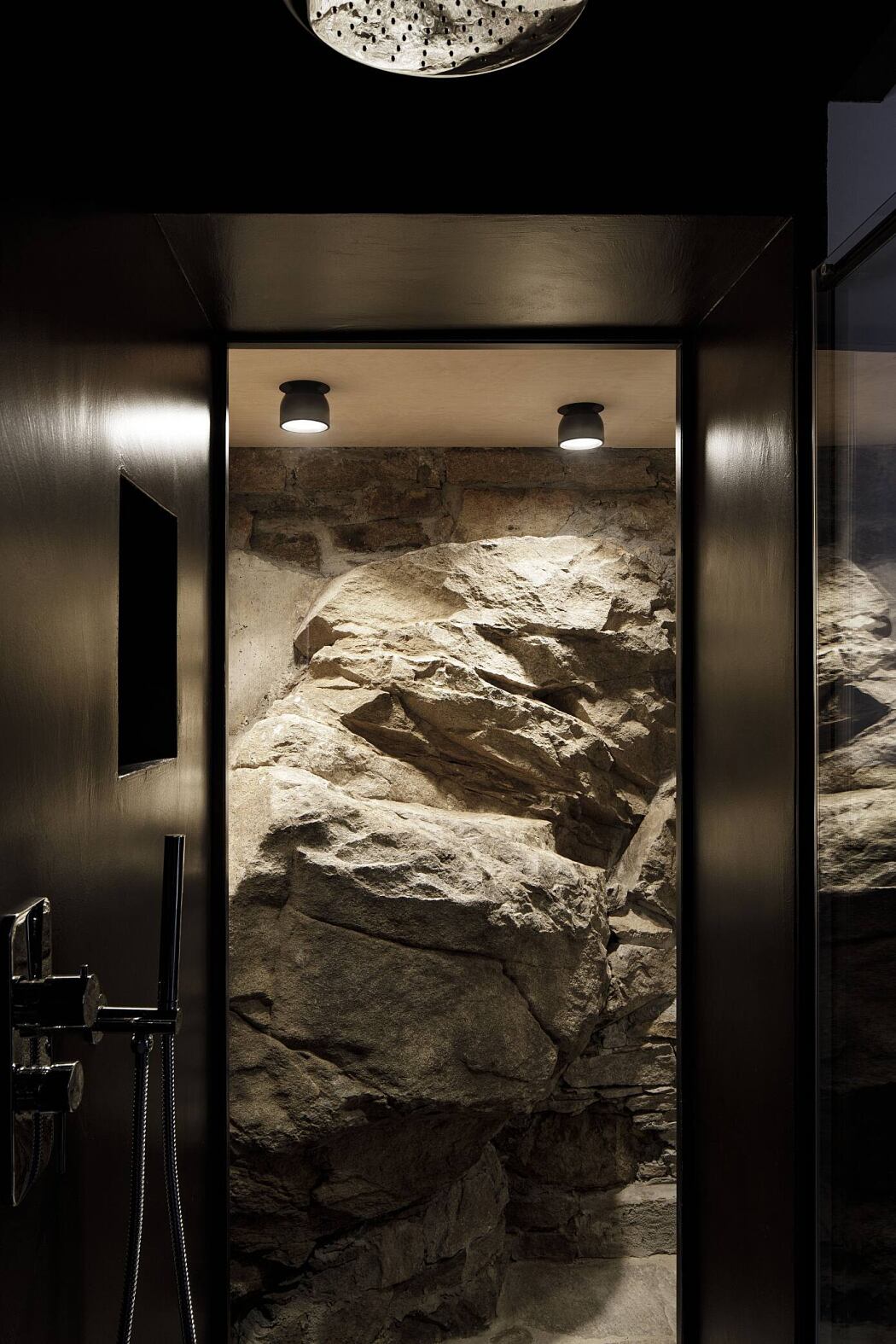 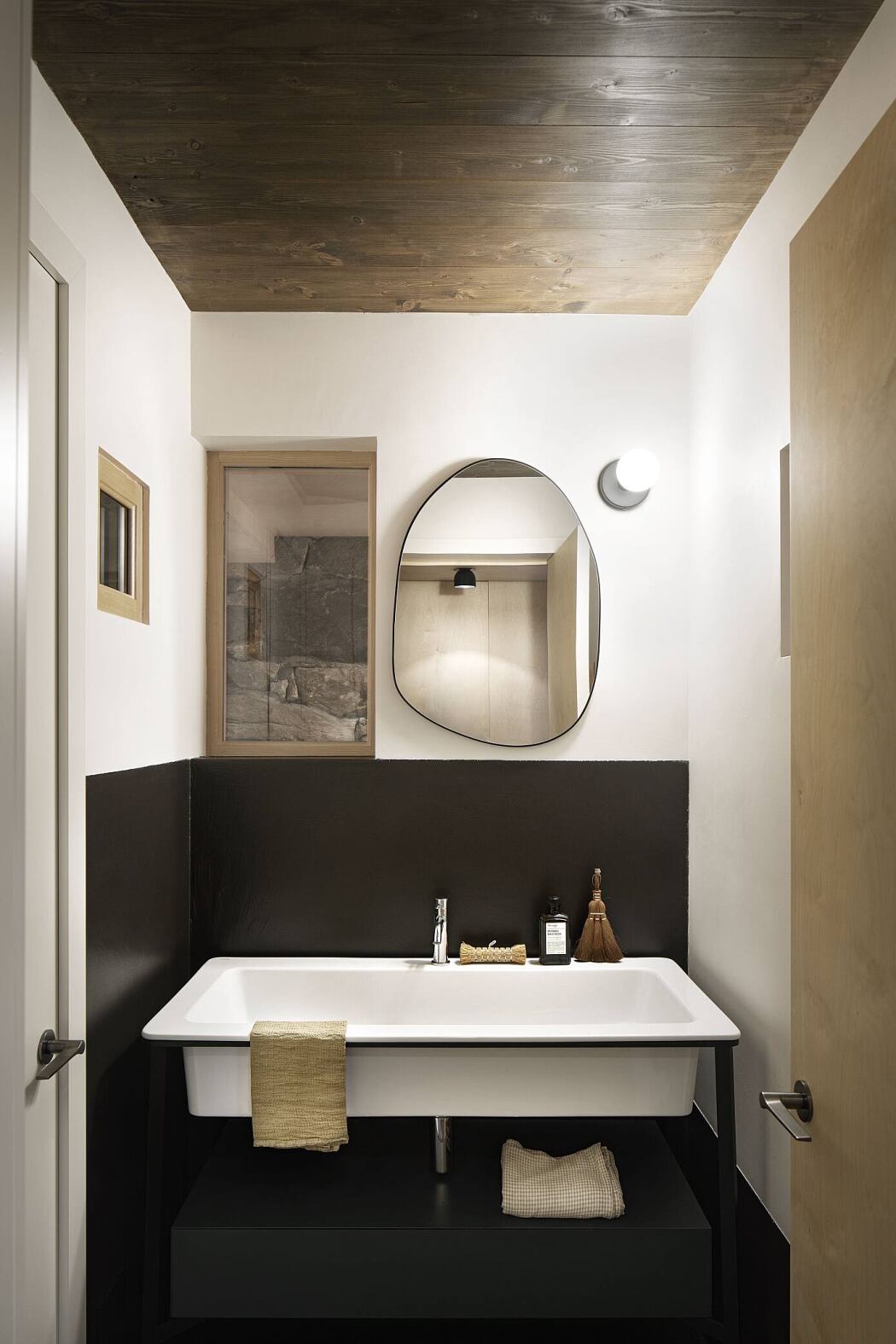 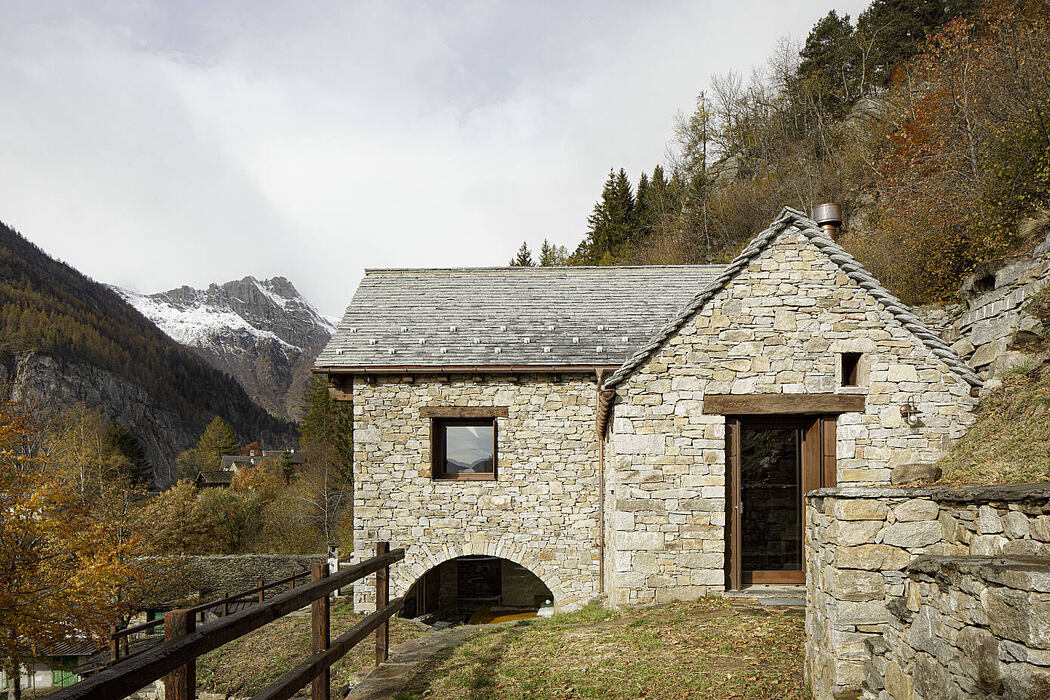 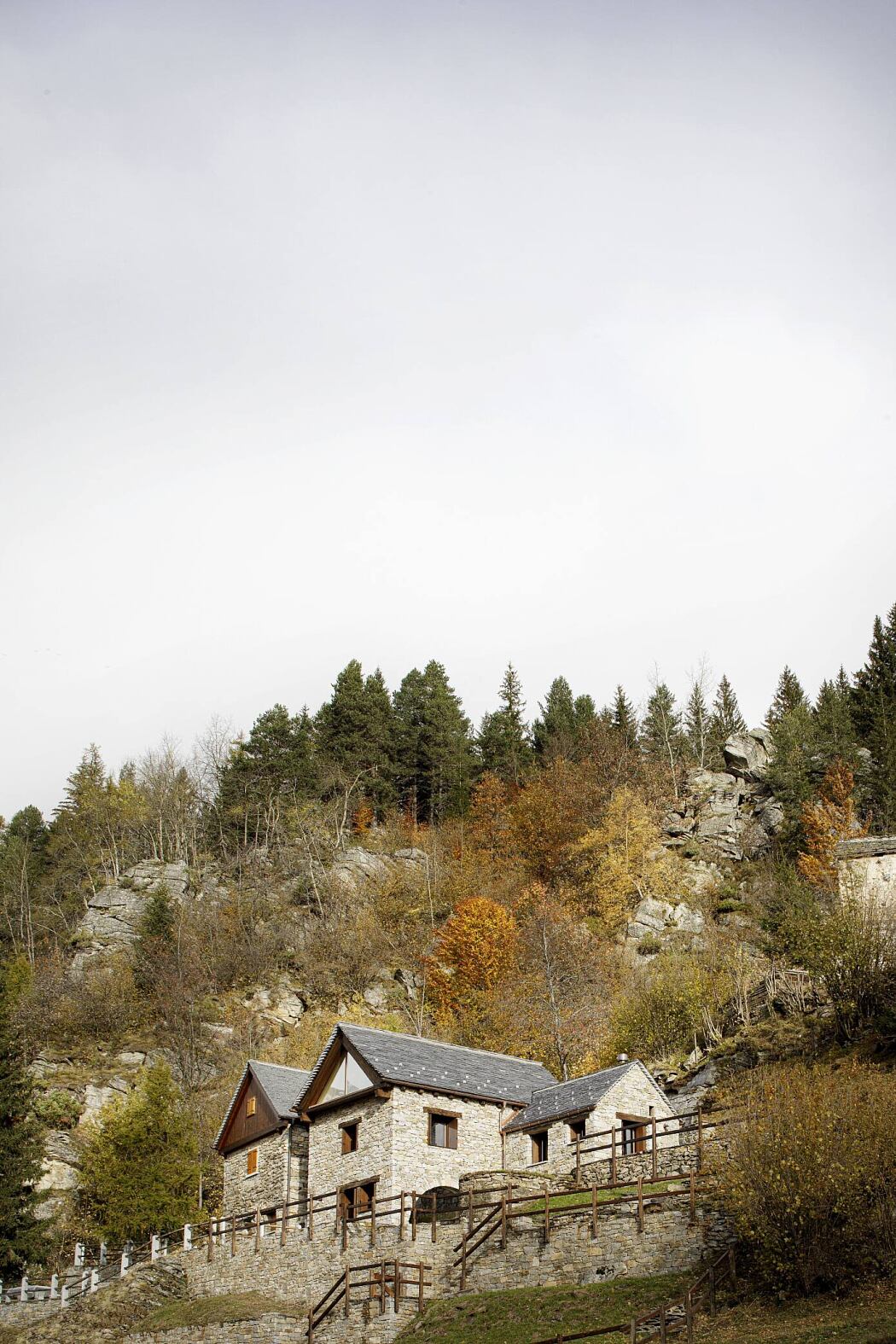 In the extreme north-west of the Italian Alps, immersed in the most unspoiled nature, Casa Cinsc is located in one of the few valleys spared by the expansion of mass tourism, which transformed the mountains between the 1950s and 1980s.

We are at almost 1,400 meters above sea level, where the roads become gradually steeper to reach the small group of houses perched on a mountain ridge. Places inhabited for generations that have maintained vast expanses of pasture meadows and cultivated land, have now returned to dense woods. An inevitable process of re-appropriation of nature that characterizes the existing valley and attracts a slow and respectful tourist flow.

The greatest value of this place can be summed up in a few words: the essence of the Alpine rural heritage and the inestimable value of the resources available, thanks to the rich natural context.

Casa Cinsc is an act of recovery and a reinterpretation of the Alpine rural dwelling for the enhancement of a precious heritage.

AGAINST THE ABANDONMENT OF THE ALPINE LANDSCAPE

Traditional architecture that emerges from the traces of a bucolic past, characterized by the garrison of men who were able to settle in respect of a hard place, made of steep slopes, rocks and lush woods. Inaccessible and generous at the same time, it is precisely in these territories that the construction, typological and popular tradition is rooted and perpetuated, thus revealing the ‘culture of the mountains’.

RUINS, TRACES OF A HISTORY

The first inspections revealed a ruin typical of the area, used mainly for the shelter of livestock and seasonal hay. The structure was rather precarious, in fragile balance, but it reserved unexpected discoveries. In fact, a large stone arch and an ancient fireplace emerge on the ground floor, suggesting that before being used as a stable, the building had served as a residence. In addition, the presence of a sort of Tholos outside, less typical in the area, has given the complex more connotations.

BUILDING INSIDE THE BUILT

The project restores the old shape, consolidates the walls and intervenes by reconfiguring the interiors. From an exchange of volumes, an additional body arises that enriches the original layout and clarifies spaces and functions.

To do this, a redesign of a space at the heart of the house – the place of conviviality, the kitchen – was used, obtaining a double height capable of providing a useful surface for the extension. In this way the environment expands, granting greater comfort and flooding the space with natural light. The entrance and living room are therefore located in the new volume, with its heels on the mountain edge, could only turn towards the landscape.

The interior is thus configured as a privileged place from which to observe the profile of the surrounding peaks. The different openings that move the facades derive on the one hand, from the restoration of the previous ones and, on the other, they revisit archetypal geometries.

Designed from the inside out, these openings offer glimpses towards the landscape which build a new geography of the domestic space. Each environment thus enters into a direct and unique relationship with the natural world that surrounds it and of which, after all, it is very much a part of.

House Cinsc is unadorned, rigorous and minimal in language, as it was when it was conceived. The textures of the walls between old and new intertwine in a single mesh, hand-rebuilt stone by stone.

The interior, through the use of a few essential materials, instead shows a wealth of volumes, levels and proportions.

In a context strongly characterized by the use of stone, we internally choose wood for the floors, walls, ceilings and main furnishings. The contrast between exterior and interior is evident: outside a hard, cold stone body, mimetic with the landscape; inside, instead, an intimate and warm environment, where timber is the protagonist.

The traditional image thus remains unchanged, in strict compliance with regulatory requirements, which finds its balance with the interior environments linked to an image that draws, instead, on contemporary Alpine architecture.

This entirely wooden core fits inside the existing perimeter, tracing its shape. It is the principle of “space within space”, one of ATOMAAs tools for the reuse of Alpine ruins.

The levels, the existing and the new, appear to overlap each other. The materials; the stone with its thermal mass and the complete internal package with its frame, the wood fibre insulation and the birch plywood coating are stratified. The desired domestic comfort is thus generated by making the old ruin inhabitable.

In a valley of larch trees, the latter is the preferred choice, but where possible we reuse the older and grander timber elements, recovered from the disposal of the old floors and the deteriorated beams of the roof to give them a new function.

Casa Cinsc rises above the rock, partly determining the development of the house due to the need to accomodate the land. The existing and new walls are made of the same rock, an important presence that reveals itself intact in some of the rooms of the home.
Where neither the wood nor the stone reaches, here you will find raw exposed concrete, used in a timely manner, for the structure and where it is present it does not hide, but openly dialogues with the primary materials of the house.

Total and almost obsessive reuse of the materials taken from the existing ruin. New life, even where the conditions of the structures did not allow them to be recovered: we reused everything! The stones of the old, disused portions of the walls were used to rebuild the new walls, the wood of the old roof to create door and window lintels.

The retaining walls of the terraces were built with portions of the excavated rock, as well as for the volume of the extension. In addition, the external paving re-uses the stone of the old stoned roof. All this thanks to local artisans who still retain the skill of traditional stone house construction.

The first room you come across is the living room, anticipated by a sort of vestibule. This space was conceived to observe the mountain accompanied by the warmth of a free-standing stove with a contemporary language.

Here the floor is in black resin, differentiating the new environment from the rest of the house, with their black stained larch floors.
Following slight differences in height, we move on to the pre-existing building where there once was the entrance door.

The kitchen / dining room is located, as usual, in the central core of the home, the real heart of the house, from which all the rooms branch off. The kitchen is characterized by a large piece of furniture that occupies the entire double height of the room and gives a contemporary face to the interior space. The room is filled with natural light that enters from the main gable, fully glazed.

In this room, lit from above, small windows frame the view towards the landscape, painting dynamic scenes as the seasons change.

The volume of the services, with the kitchen wall and the two flights of stairs, is a real functional block for the use of the spaces for which it serves. This central element acts as a hinge around which its uses flow providing functions which orbit around it.

Down a narrow staircase the main bedroom is located on the lower floor, to ensure greater privacy but above all to enjoy the privileged view from the stone arch.

The arched shape window provides a space for sitting and contemplation as the user has the luxury to gaze towards the landscape, through a unique tectonic element which mirrors and references a form which once was.

Up within the pitch of the roof, a second room is hidden on the upper floor, accessed by a retractable hatch. Only from this height, through an opening in the wall, can you admire the landscape through the glazed tympanum.

The respectful treatment of historical pre-existing structures was an important and almost obligatory gesture, against the background of a very complex regulatory and bureaucratic network.
The recovery was a balancing act between authenticity and contemporaneity, an attempt to maintain the atmosphere and identity of the place also by intervening between the new structure and the old structure, thus generating a contemporary dialogue, with the aim of preserving the Alpine Rural Heritage. We are witnessing an often-spontaneous return of collective interest in places such as this, especially in this historical moment.

It is not only the need to escape, at times, from a highly urbanized reality, a reality with a thousand opportunities and unstoppable rhythms, but it is perhaps the rediscovery of a special bond with nature, which has always been inherent in us. Observing the Alps with the ambition of building a new scenario of possibility and no longer a simple vacation spot, reflects a prosperous area where local economies can be rooted in a new form of sustainability – by promoting sustainable tourism capable of fitting into an existing built local context and enriching it. What, really, is this Alpine Rural Heritage? What is its richness?

The length of time now frozen, the history of the place, testified by those buildings conceived in a spontaneous, vernacular way.The creation of an anthropic landscape in perfect symbiosis with the surrounding nature.

The respectful proportion between the artefact and its environment, in the creation of a system that makes the built place indistinguishable from the natural landscape. Together they simply coexist.

Today, ATOMAA tries to interpret this trend, in a more ambitious framework, proposing this, as the first of a series of interventions aimed at reviving the local territory, preserving the anthropic balance of the place.