Emily Forbes was already renting in Lyttelton when she first set eyes on her section. The GP was walking through the steep streets one day in 2009 when she spotted the site for sale and fell for its romantic charm. “There was an old settler’s cottage on it surrounded by an incredible garden,” she says. “The previous owner was an avid gardener, so there was a haze of flowers beneath the overgrown plants.” 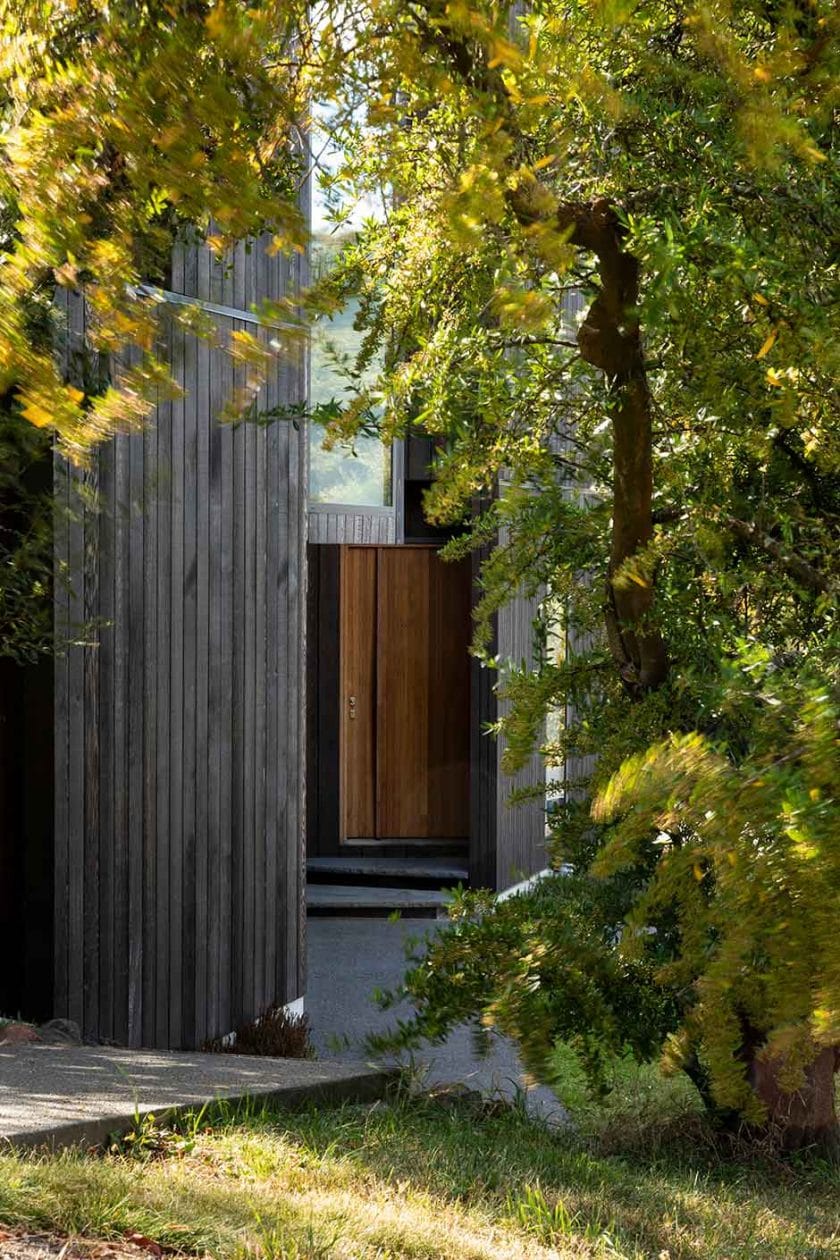 A gardener herself, Emily bought the section planning to renovate the cottage. Initially, living in it was all well and good, but then the 2011 Christchurch earthquake caused the foundations to break, and when an attempt was made to move the house, it crumbled. After lengthy discussions with the council and insurers over the next step, Emily made a U-turn. It was time for a warm, dry, contemporary home and ultimately a new chapter, so she approached Nic Curragh of Christchurch’s Objects, a friend of a friend, to design her a modern home.
“I was brought up in a 16th-century watermill in England and I’ve always lived in old houses, so new was very alien to me,” says Emily. But create something new was just what Nic did on this site with views of Lyttelton Harbour, Banks Peninsula and the Port Hills.

As you enter the three-bedroom house Emily shares with her daughters Kitty (4) and Grace (1), its cedar exterior folds in at a point on the south side to reveal the front door leading towards an open-plan kitchen, a living and dining area with a double-height ceiling, a guest bedroom and the laundry. Stairs climb up a second storey housing two bedrooms, the bathroom and a mezzanine. 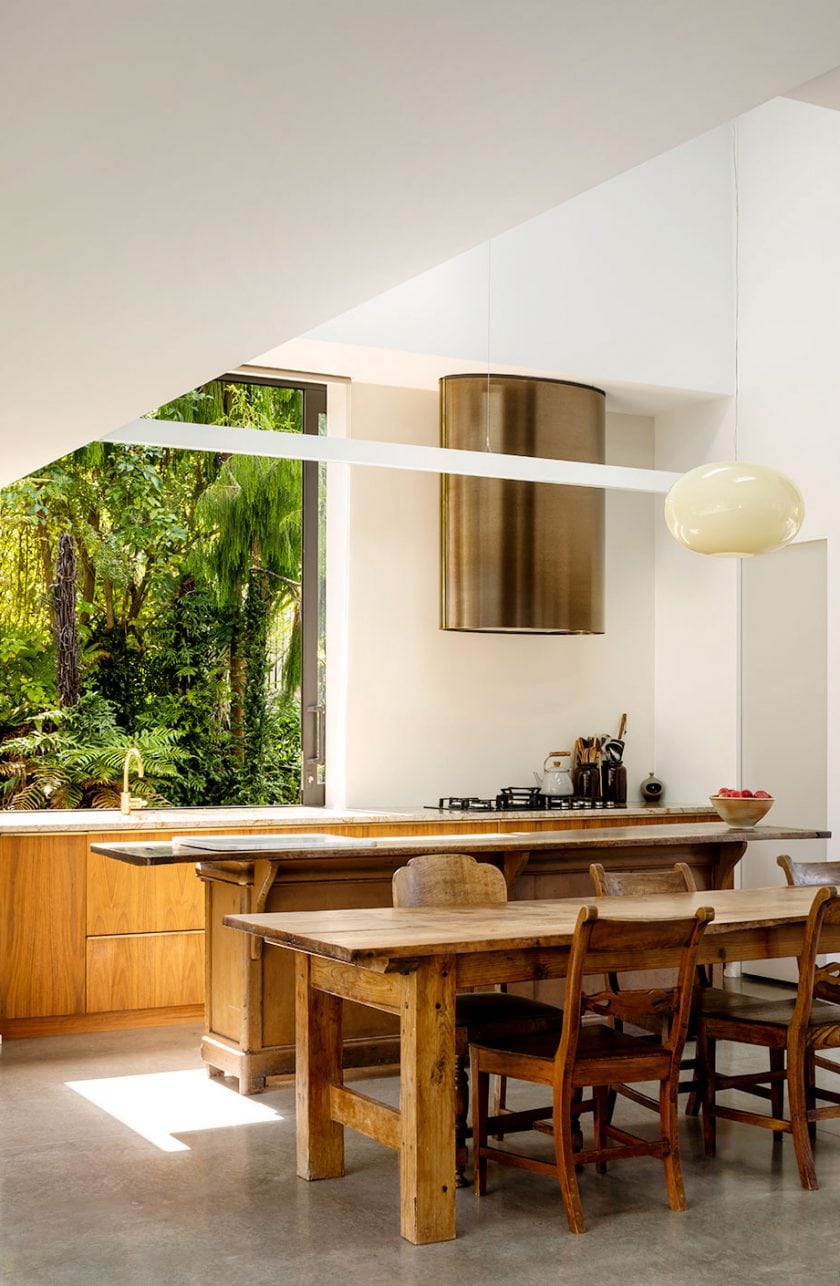 Locals are no strangers to the southerlies that blow into Lyttelton, so Nic prioritised shelter in his design — an L-shaped layout that also nestles the home in a natural dip in the section, the banks of which Emily began planting during the design process. The ‘L’ acts as a buffer from the wind while allowing the family to comfortably enjoy their outdoor spaces. All the main living is in the nook of the ‘L’, which receives the northern light and, sitting low in the section, the best protection from the wind. On the northwest side of the living area, the house opens onto a sheltered courtyard and garden. On the eastern side, the morning sun can be enjoyed on another deck. 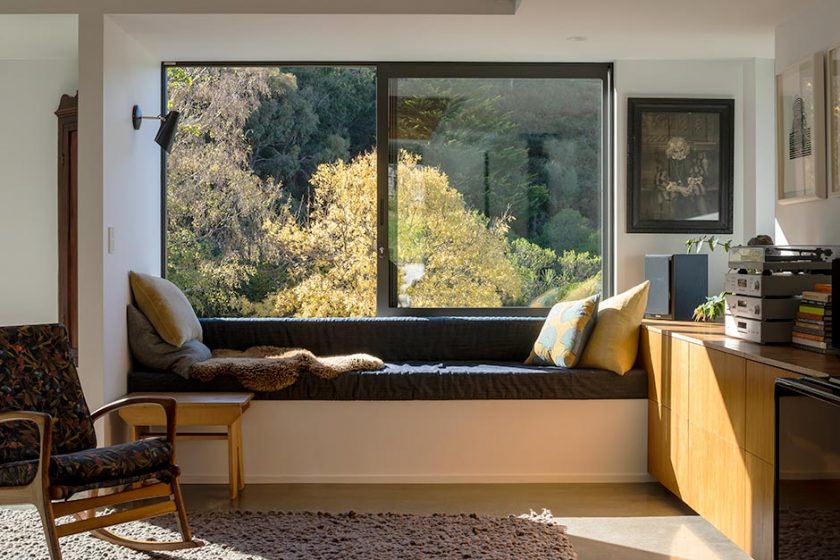 It was vital that the home enhanced the site’s natural light. “The light in Lyttelton is critical, and everyone’s conscious of how much they get,” says Emily. “Sections hugged by the hills get capped off in winter, so there’s only a small window of light. I wanted lots of windows and outdoor connection, so when we’re inside, we feel like we’re outside, and the kids can run in and out. It’s great for summer, and even in winter, the house is sheltered because we still get the sunlight from the north. It streams in and warms the concrete floors.” 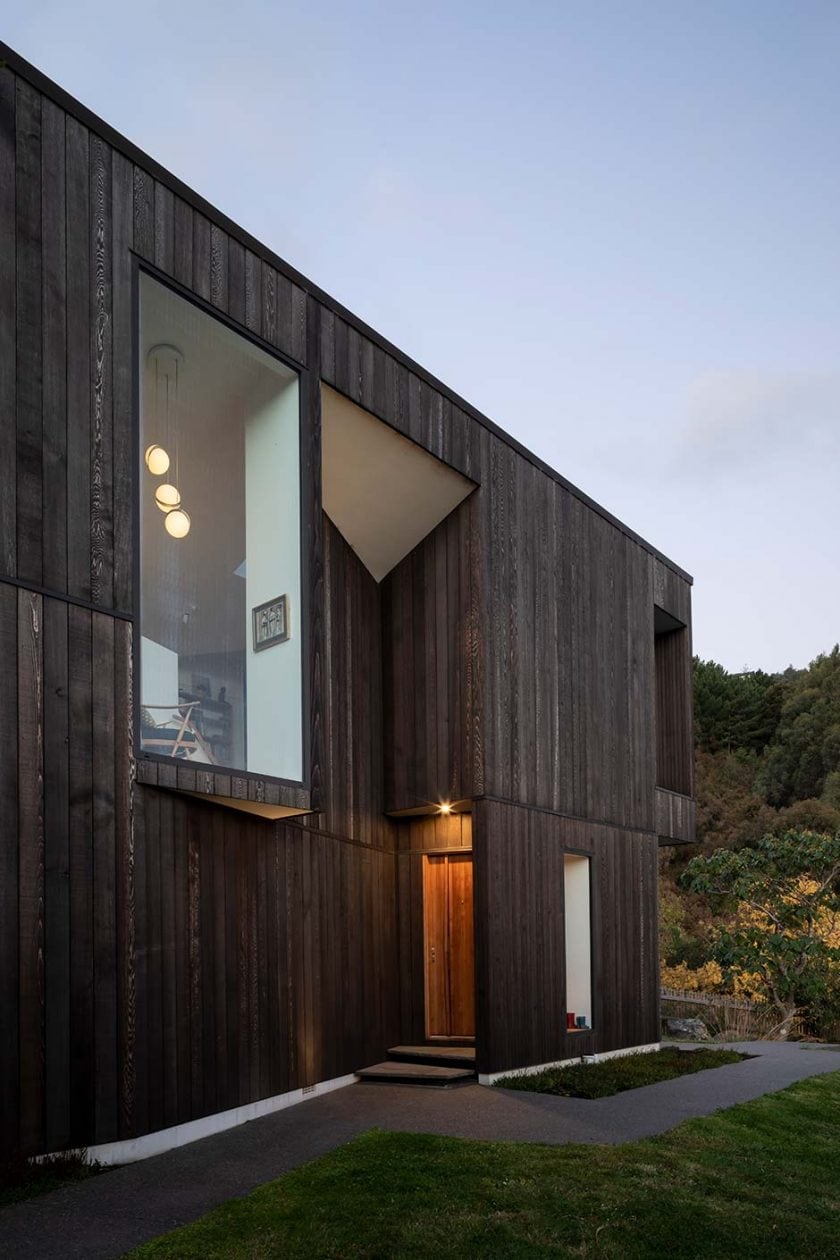 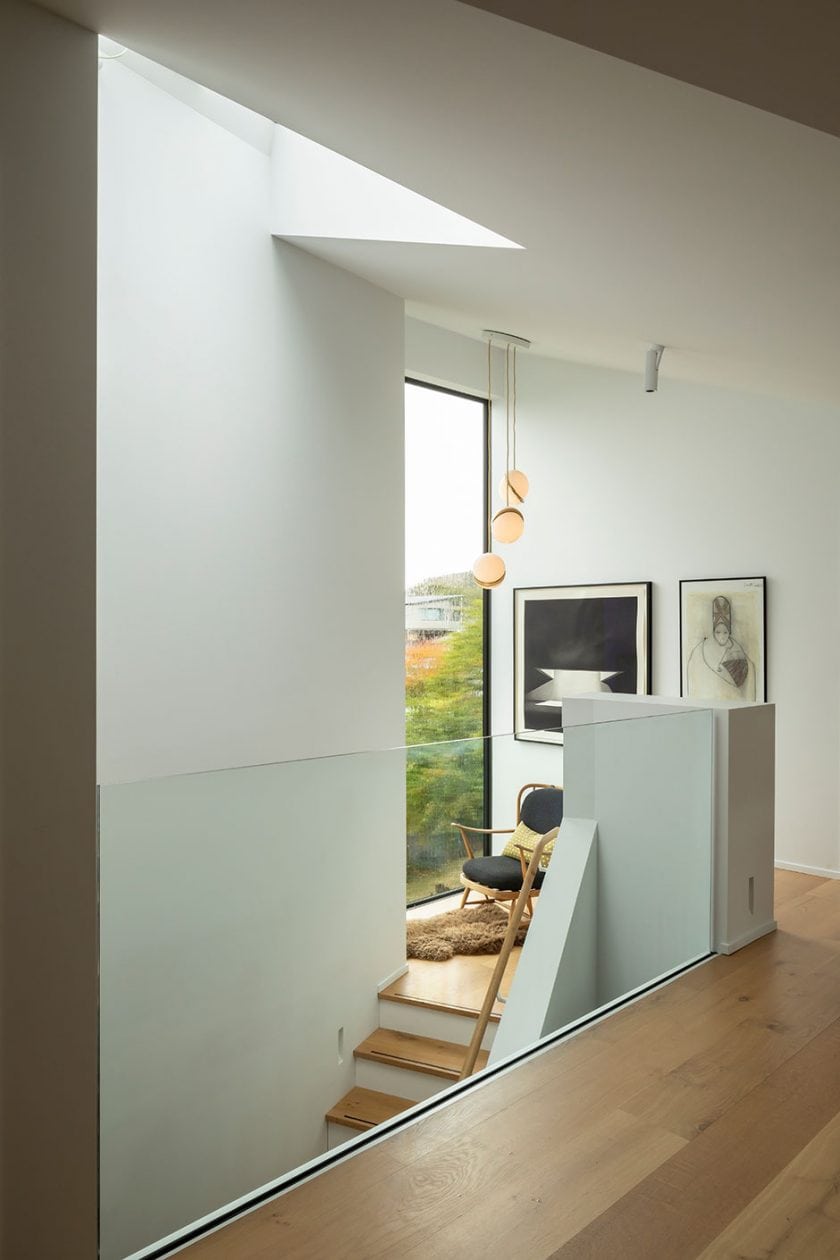 These sun-soaked interior areas — expressed via a neutral colour palette and pared-back details that mix a luxe refinement with a nod to past narratives — reveal a thoughtful approach to day-to-day spaces. The living area features a window seat that overlooks native bush and is positioned near a log burner (the warmth from which joins that from the polished concrete in the living and kitchen areas, which are additionally heated underfoot), and there’s a sense of ease in the smooth flow through to the kitchen and the mezzanine above. A series of peaceful zones to retreat within — to admire the sun or storms passing over the harbour — offer solitude, but you never feel as if anyone’s too far away. 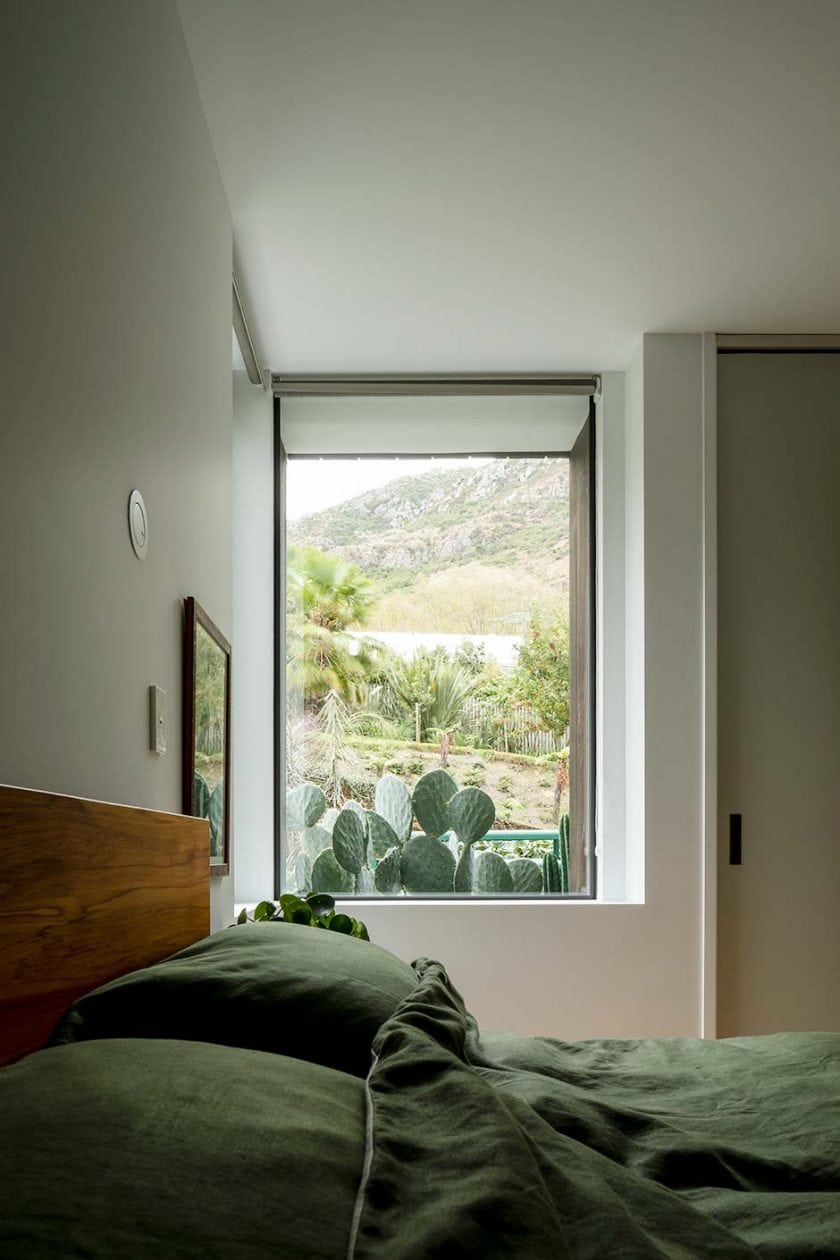 This bond between those inside the home also exists between the dwelling and its site. “I wanted the house to blend in with the hillside by using simple materials,” says Emily. “From a distance, the dark-stained cedar works perfectly. The shape Nic designed stands out in that it’s modern, with a container-like look, but its clean, crisp aesthetic melds with nature and will age in a lovely way, especially as the garden grows.”

Emily once had her heart set on a heritage home. Today, this wonderful alternative is proving a rewarding solution that stems from her embracing a new design journey, and Nic’s considered approach to an aesthetic that responds so respectfully to its surroundings.