A Layover in Japan: How to Spend 8h in Tokyo


So, you’re transiting through Narita International Airport in Japan and have a long layover; this makes you instantly roll your eyes, let out a hefty sigh and start to wonder what to do with all that time deemed wasted. But fret not, Tokyo is one of the best cities to spend a layover in.

Most nationalities do not require a transit visa when visiting Japan for a short period of time making it very easy to leave the airport for a few hours. If you have luggage, there are a few baggage storage counters at Terminals 1 and 2 (prices vary according to baggage size).

So what do you do once you’ve decided to take advantage of this free time? Sure you can join a handful of other travelers in transit and head to nearby Narita City to visit the Naritasan Shinshoji Temple but why not venture off the usual tourist circuit and head to a lesser-known part of Tokyo instead?

That’s exactly what I did when I had an 8-hour layover in Narita. After a swift and trouble-free check at customs, I headed straight to the information counter to find out the quickest way to get to Tokyo. Japan has an impressive public transit system, but the most efficient way to get to Tokyo is the super-fast and modern Skyliner train. The price of about 5000 yen return wasn’t cheap, but I wanted to assure a fast trip to and from the airport.

Eight hours seemed like enough time to experience the bustling city center of Tokyo, but I didn’t want to risk being distracted by all the action and then missing my flight. Instead I chose the closest district that would give me a snippet of this mega-metropolis. In just under an hour I arrived in Ueno in the Taito Ward.

Once in Ueno I was surprised by how quiet it was, but then I realized it was still quite early in the morning. Soon enough the streets filled with business men dressed in their black suits and uniformed teenagers heading to school. I was starting to get a sense of being in Tokyo and I loved it!

Without the added pressure of running around checking things off a must-see list in a short time, Ueno is a perfect place to just relax and slowly take in the urban vibe of everyday life.

Read on for some easy-going, stress-free things to do during your layover.

1) Go to a local grocery store

When I travel, I always make it a point to go to a local grocery store. This is where you can turn an otherwise mundane activity into a cultural experience. Strolling through the alleys allows you to discover the strange (and sometimes unidentifiable) array of local foods and to exchange a few laughs with fellow shoppers. If you like taking home local food items then a grocery store is the best place to make your purchases. Prices are much cheaper than at the airport and the experience is guaranteed to be much more fun!

2) Eat in an Izakaya

An izakaya is a typical Japanese-style eatery. Ueno has its fair share of izakayas – just walk around and you’re bound to find one. Make sure the place is filled with local patrons assuring good turn around and even better food.

Despite the number of izakayas in Ueno, most of them don’t accept credit cards. I looked around for an ATM to withdraw cash but much to my dismay it didn’t accept foreign credit or debit cards either.  I finally did find a quaint restaurant that did accept credit cards though with much hesitation. To avoid this happening to you, it’s better to exchange money at one of the many currency exchange offices at the airport or if you prefer you can withdraw money at one of the ATM’s.

Just like with grocery stores, when I travel I enjoy browsing in book shops whenever I get the chance. I came upon a small one while walking in Ueno. It was non-descript and lacked any sort of luster but there was a good variety of books and magazines. They were mostly in Japanese but that shouldn’t stop you from buying a few. Japan is known for its avant-garde design so if you’re a fan of flipping through magazines or need a good-looking book to dress up your coffee table then make sure to buy a few written works to take home with you – they’ll make great conversation pieces!

Fun fact: Japanese literature is read from right to left and from back to front.

Like in many Japanese cities, Ueno has its very own pedestrian street named Ameyayokocho. The area is filled to the brim with shops and markets. Here you can find anything from (expensive) fresh produce to a variety of fish on display to deeply-discounted clothing and shoes. Prices are very reasonable for Japan but the quality here isn’t the best. Nonetheless, the energy is vibrant and the street scenes are very entertaining making for some great photo ops!

Hanami is the art of flower viewing. If you’re in Japan during springtime then head to Ueno Park, Tokyo’s most popular park, to participate in some hanami during cherry blossom season when the sakura are in full bloom. Unfortunately, the sakura had already fallen when I was there but hanami is a very pleasant way to spend an otherwise uneventful layover.

image by Scott Vachalek via

As you can see, you don’t have to wander around aimlessly at the airport during a layover in Japan. Just hop on the train and head to Ueno to make the most of your free time! 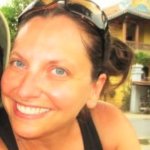 So far Lydia has traveled to 35 countries across 5 continents, but she still doesn’t know how to whistle. Her creative mind enjoys reveling in architecture, rummaging through textiles and discovering local design trends while scoping the globe. If you can teach her to while, find her at , , or .