7 Places that prove France is more incredible than you Imagined


You could spend several lifetimes in France roaming the streets of Paris eating baguettes, meandering through the coastal villages of Normandy, exploring the tiny towns with rustic architecture and Chateau-filled hills, and buying 2 euro bottles of wine for dinner every night.

With a square mileage smaller than the state of Texas, France sure packs a cultural, geographical, and awe-inspiring punch. This Western European country sandwiched between Spain, Germany, and Italy encompasses rocky sand beaches, infamous works of art like the Mona Lisa hiding in the Louvre, historical richness along the windy beaches of Normandy, and enough cheese wheels, decadent chocolate, honey, pastries, and champagne to feed the gods.

There is no doubt that the main attractions of France – such as the Eiffel Tower in Paris, the seafood towers in Nice, or yachts along the French Riviera – are straight out of a fairytale, but there are so many places to explore; all you need is a baguette (and maybe an espresso) in hand. 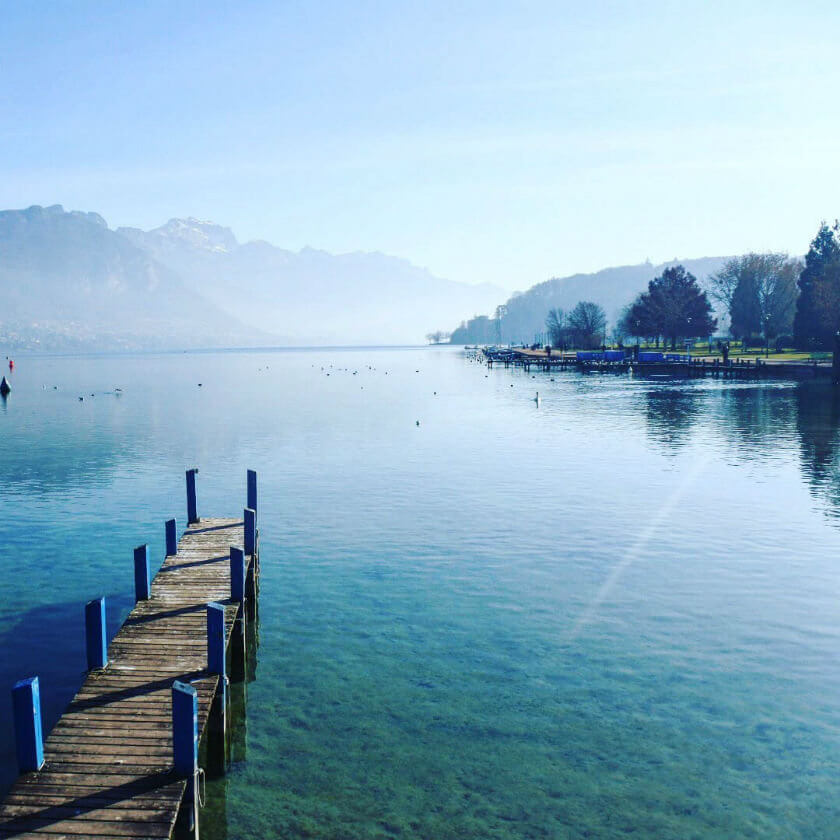 Annecy is one of France’s best-kept secrets. This charming town is known as the “Venice of France” for the winding canals that dissect the medieval town. Lake Annecy is stunning as it is surrounded by colorful homes, mountains, and multiple cheese + baguette picnics. 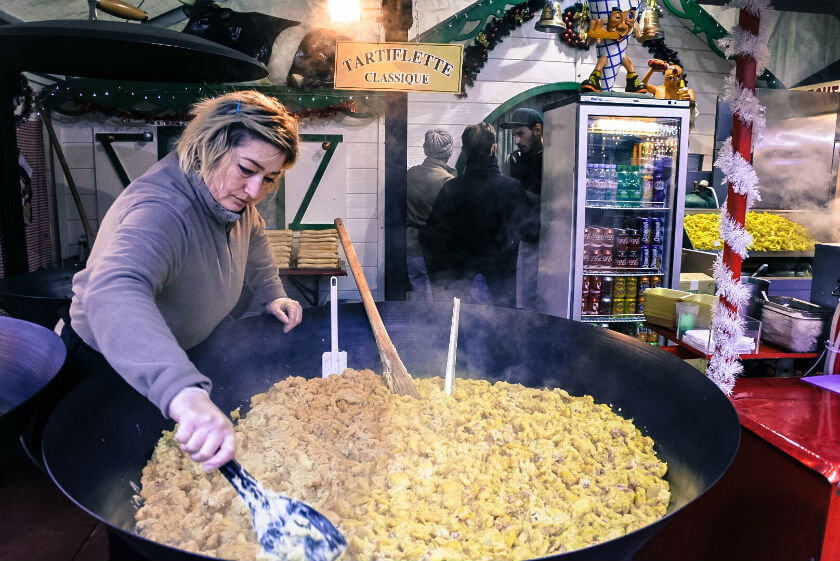 The activities of Annecy change seasonally, but Christmas in Annecy might be hard to beat. The canals of Annecy simply sparkle, and are lined with Christmas stalls carrying anything you could ever want. Number 1 on my list is the steaming Tartiflette pots as large as hot tubs, which smell so good you’ll almost want to hop in. Tartiflette is a savory French dish of gooey reblochon cheese and potatoes. To wash it down, don’t miss the ‘Vin Chaud’ or hot wine that everyone is clutching as they browse the stalls.

2. The Streets of Chamonix

Chamonix is a quaint ski town nestled into the base of Mont Blanc in the French Alps. Ski towns like Chamonix are some of my favorite places in the world as I believe no one really has an agenda besides riding all day and warming up with wine or beer in a pub all night. If you’re not a huge skier or snowboarder you can hop on one of the cable cars that take you high into the mountains for some of the best views spanning across Italy, Switzerland, and France.

You must eat a burger at Elevation 1904, drink a few pints at the , and sip an espresso on the patio overlooking some of the highest summits in the Alps.

3. The Pipe at Aguille de Midi 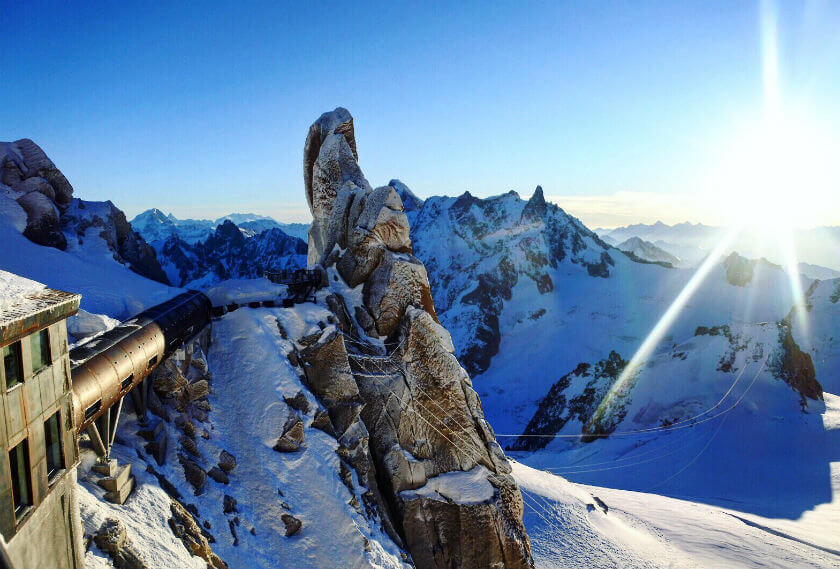 Aguille de Midi can only be reached by cable car from Chamonix. This lies 3,482 meters above Chamonix and feels like a spaceship high in the snow-capped mountains. Picture winding corridors, a newly developed pipe, and a 2.5 m glass cage that juts out over a 1000 meter precipice. We took the earliest (8:10 am) cable car and were joined by a large group of ice climbers who ascended into the snowy, frozen abyss with their crampons and ice picks in hand. I suggest going early to beat the crowds, as it was a completely different feeling landing here with no one else around! 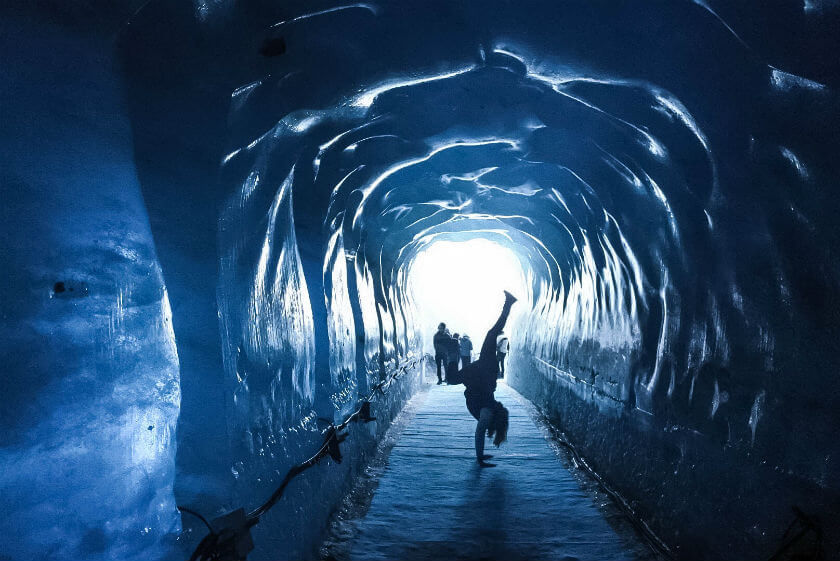 The Mer de Glace (Sea of Ice) is the largest glacier in France, at 7km long and 200m deep. It only takes one 30-minute train to get there (called the ) – an experience which feels like boarding the train to Narnia or Hogwarts. After you hop off, your vantage point opens up into a full-blown glacier panorama. Then it’s just one small cable car and 430 steps downhill until you are in the heart of the largest glacier in France!

5. The Machines of the Isle of Nantes 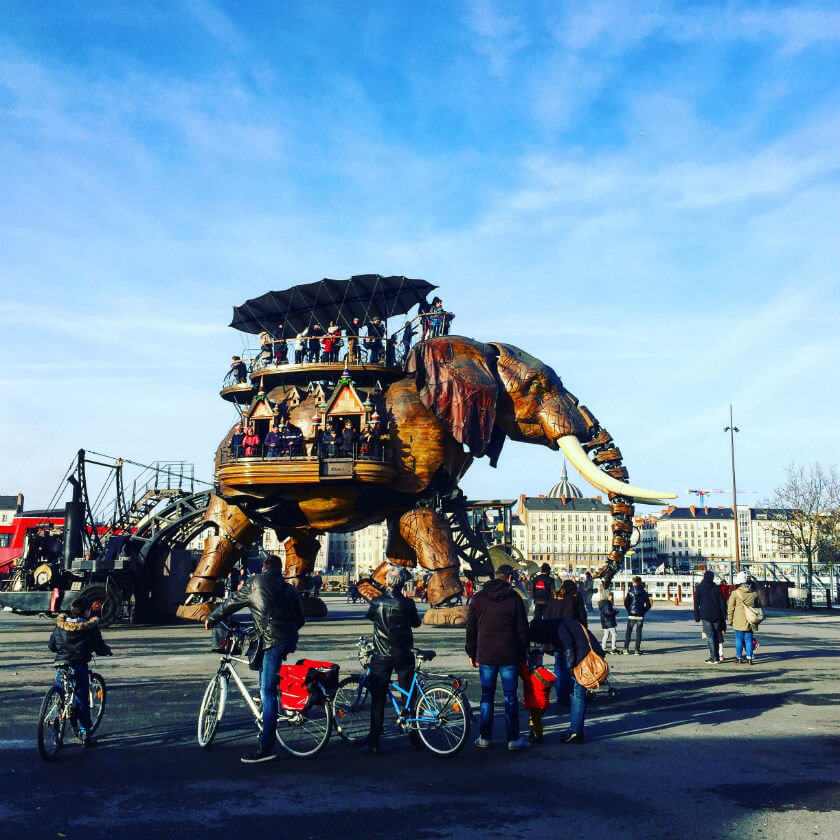 If you’re into exploring all the randomness of countryside towns, you’ll be in for a real treat in Nantes. Nantes lies along the Loire river and has long been known for its manufacturing and industrial beginnings. Beyond the machines and river, I would suggest heading to Cafe Cult for a break from the cold and of course a beer and a cheese plate.

Built in the former shipyards of Nantes lies a museum / unprecedented artistic project like none other. Les Machines de l’île (or a world of machines) was created by François Delarozière and Pierre Orefice’s imagination and is a confluence of Jules Verne’s “invented worlds” and the mechanical universe of Leonardo da Vinci. You can find the Great Elephant (12 m tall) slowly roaming along the old shipyards of Nantes, as well as a giant mechanical spider, and many other steel creatures. The line to enter the museum was ~2 hours long when we arrived – that’s a pretty long wait, but the museum is a wonderfully strange experience, and it is impressive to see the Great Elephant roaming about.

6. Inside the walls of Mont St. Michel – Normandy 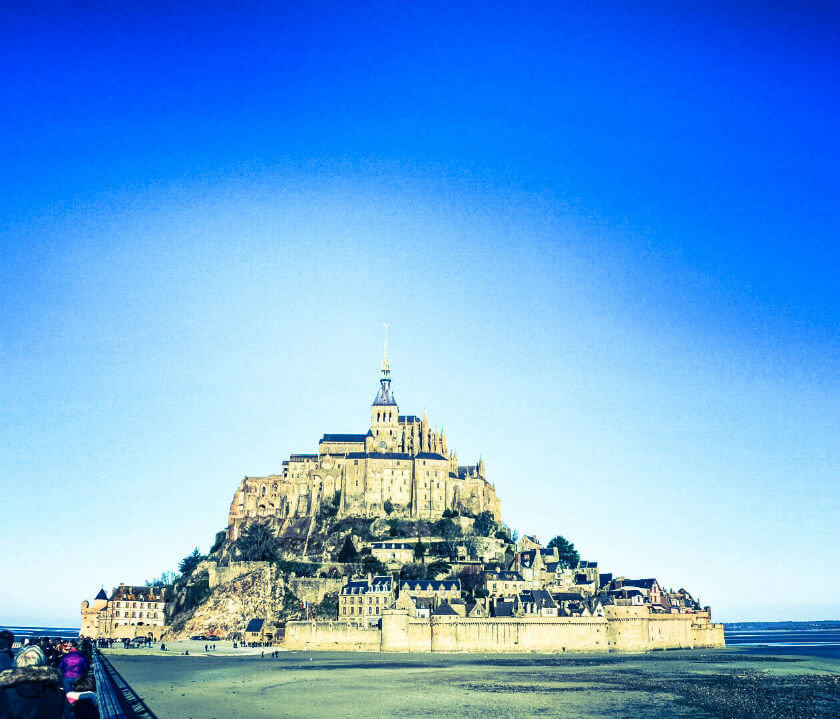 Mont St. Michel was built in the 6th century and has been reconstructed and re-owned by various religious groups over the ages. After a winding, flat 3-hour drive from Angers, the fortress of Mont St. Michel seems to rise out of nothingness from the sea and is most impressive from a distance. You can spend hours wandering along around the Abbey and its surrounding walls.

If you hate long lines and overpriced food, skip the restaurants and shops within the city walls. It is quite crowded and you can find much better bites to eat back in town or take a road trip stop to the Belgian-walled city of Rennes. 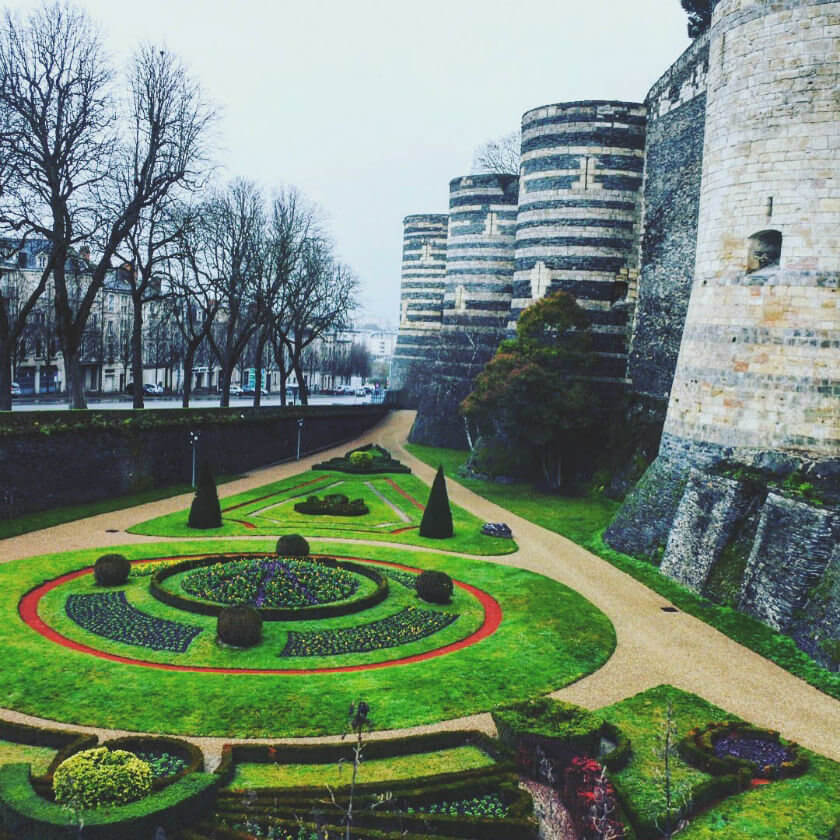 Angers was on my radar as my friend’s brother was studying cheese chemistry there, and we ended up spending Christmas in a quaint Airbnb in the french countryside with him and his entire family (yes, all 12 of us). The full experience of traveling in France with a party of 12 is a story for another article… But Angers is a lively university town that is much more than just a gateway to the Loire Valley.

One of our very own readers suggested I head to which ended up being one of the coolest hole-in-the-wall bars with a robust beer selection – think Masala Chai and Peanut Butter Chocolate Ales! Most towns in the western region of France seem to have a Chateau, but stumbling upon the Château d’Angers I felt as if the site was physically pulled from a fairytale. Its appearance is most impressive due to the beautiful botanical gardens taking up space where the castle moat used to be.

From melt-in-your-mouth pastries to cheese boards and endless bottles of wine, the decadence the French display is simply unparalleled. My favorite days and places always lie on the edges of town, the unknown adventures. I will never forget roaming the empty halls of Aguille de Midi 4,000 meters up, or the taste of the flaky goodness of my first french croissant. I hope you imagine France to be amazing, and I hope that these places feed that image even more so.

Have you been to France? What were your favorite places/experiences? Let us know in the comments!