5 Relationship Truths from My Honeymoon Road Trip in Iceland


‘It’s not worth it!’ The frazzled-looking couple in the red car strained to make their warnings heard over the wailing wind. Through the half-open window, I saw the grave shaking of heads as they cautioned us against the road ahead. ‘The weather is really really bad.’

Exchanging skeptical glances with my husband, I knew he harbored the same question. Hadn’t we already been through the worst?

With our newly minted status as Mr and Mrs, we had hoped to ride out the post-wedding high with a romantic getaway to the land of fire and ice. Our plan was to drive Iceland’s 830 mile long Ring Road which circles the island and would take us past crystal caves, fiery volcanoes, and Europe’s largest glacier. But even in the seemingly most magical place on Earth, a honeymoon is not all rainbows and stardust. In fact, we had unwittingly signed up for our first major challenge as husband and wife, and it had revealed unexpected lessons about our relationship. 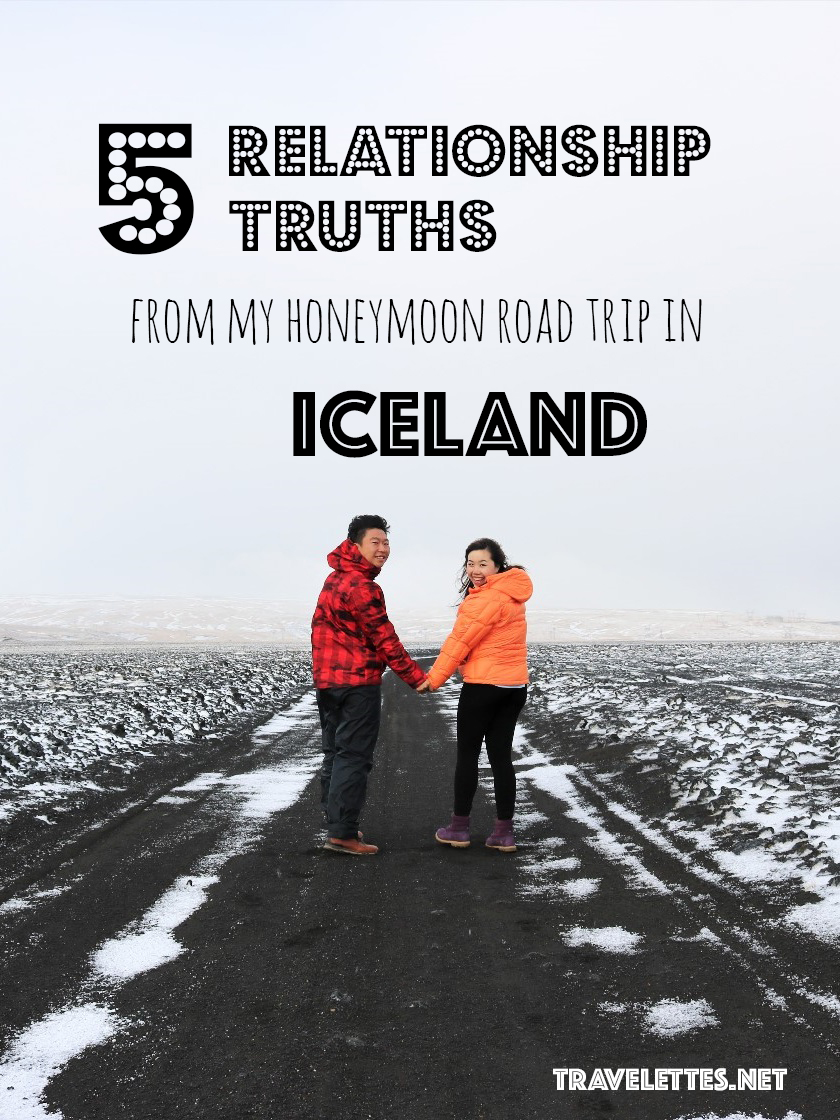 #1 It is easy to forget that we are on the same team.

When K and I set out in eager pursuit of puffins and wild reindeer in the eastern fjords, only trouble found us in that remote region. Heavy relentless snowfall had quickly erased the perilously winding roads and transformed the landscape into an unnavigable blank canvas. Soon, our 4×4 began to take on a life of its own.

I should have figured a wintertime road trip in this exotic Nordic nation was a potential setup for disaster. After all, we live in the tropics and drive on the opposite side of the road. Tensions rode high when the struggle to regain control of our wayward vehicle led to us crossing swords over who the better driver was. Those petty arguments did nothing to improve our situation but had seemed so important to hash out then.

Eventually the fear and frustration of coping in a foreign environment forced us to temporarily set aside our differences. Reconciled, we managed (so far) to weather the elements in one piece.

#2 It doesn’t matter which way we are headed, as long as we are committed to getting there together.

Those hard-won accomplishments bolstered our confidence to venture off the main highway in search of one of Iceland’s tallest waterfalls. It was why we were undeterred when a red car came bouncing unsteadily towards us that day, an ominous forewarning of the difficult journey ahead. We drove on determinedly, not knowing the couple were the last living souls we would cross paths with on that uninhabited route.

Road 327 started as a rough gravel track wide enough for one car. There was nothing much to see out there, mostly an uninspiring palette of white snow clumps and dried grass tufts blotting the black lava soil. Outside, the weather could not make up its mind—from full gale to sudden sleet, threatening skies to rare sunshine. Subsequently, the track grew so pothole ridden that every manoeuvre had to be carefully strategized for minimum undercarriage damage and maximum comfort. I was nearly sick from the continuous lurching over loose rocks and sinking into mini craters.

We never made it to Háifoss that day. With just three short but arduous miles to go, it was a classic case of being so near yet so far. But considering the long return trip we had yet to make, there was a huge risk of getting a flat tire and being stranded in the middle of nowhere.

‘Darling, we have to turn back,’ K, being the more prudent other half, declared grimly. Though slightly disappointed, I knew the right decision was one that called for compromise and cohesion.

#3 A flat tire can be a good thing, even if it means getting down and dirty.

When we finally emerged back onto the highway, we happily thought we had survived the roughest road with our car intact. Minutes later, we drove into an unmanned gas station and of all things that could happen, mounted a most unremarkable curb which promptly punctured our tire.

‘You’ve done this before, right?’ I asked K in dismay.

‘Uhh, I know how it’s done. I mean I’ve seen my uncle change his car tire once.

‘Really?’ I felt slightly hopeful. ‘When?’

That was how we ended up sprawled on the muddy asphalt—wrench in K’s hand, worn out manual in mine—attempting to change a tire for the very first time in our lives. Not exactly a picture of romantic bliss. But that got me thinking: if our relationship is a journey, let there be potholes, a blizzard (maybe), and the occasional flat tire, because an easy drive can be too predictably boring, and we might just take for granted the next majestic waterfall that passes us. It took another thirty minutes of heaving and panting before the first of five stubborn wheel nuts finally came loose. But in order to beat the imminent dusk, we had to pick up our pace.

#4 There is nothing shameful about fearing loneliness.

Luckily, help soon arrived in the form of a solo traveler from Brazil who had touched down just hours ago. I do not remember his name, but I will never forget the way his eyes shone as he introduced himself, ‘I was an investment banker, but I quit my job and now I’m going to see the world.’ His enthusiasm was so palpable that I felt a sharp stab of envy. I thought about how I once had the same lofty dream, but was ashamed of not having the guts to travel companionless.

Then, I noticed his tiny camper van, and I recalled how K and I had sacrificed sleep chasing the elusive northern lights in pitch dark, how we had endured freezing temperatures while snorkeling between two continental plates, and how we had bickered over the wrong turn he took and the right speed I should keep at. Suddenly, I was glad I was not alone. In fact, I should be thanking my lucky stars for a partner who’s got my back unquestionably.

On our last day in Iceland, we swapped front seats for the back, soaring away from the ground on a helicopter for a different perspective.

Midway through the flight, our pilot announced, ‘Weather is fantastic. Let’s make our first landing here.’ Right beneath my feet, a spectacular column of water plunged thunderously into a narrow semi-frozen gorge. A beautiful kaleidoscopic arc glistened where warm sunrays greeted the spray of droplets. ‘Welcome to Háifoss.’

K and I burst into wide grins on recognizing that name. I was reminded of how our courtship, like the journey to Háifoss, had not been a straightforward one. Along the way, we encountered obstacles and pursued something else. On both occasions, we took a longer than usual detour to reach our final destination. Yet each experience was, without a doubt, well worth our while.

Vania Lim is a restless soul who is convinced there are countless adventures out there waiting to happen. She is the happiest exploring unfamiliar places and photographing dramatic landscapes. Read her stories at When she’s not traveling, you can find her working up a sweat at the yoga studio, indulging in romantic tearjerkers or hanging out with her two dogs on the sunny shores of Singapore which she calls home.