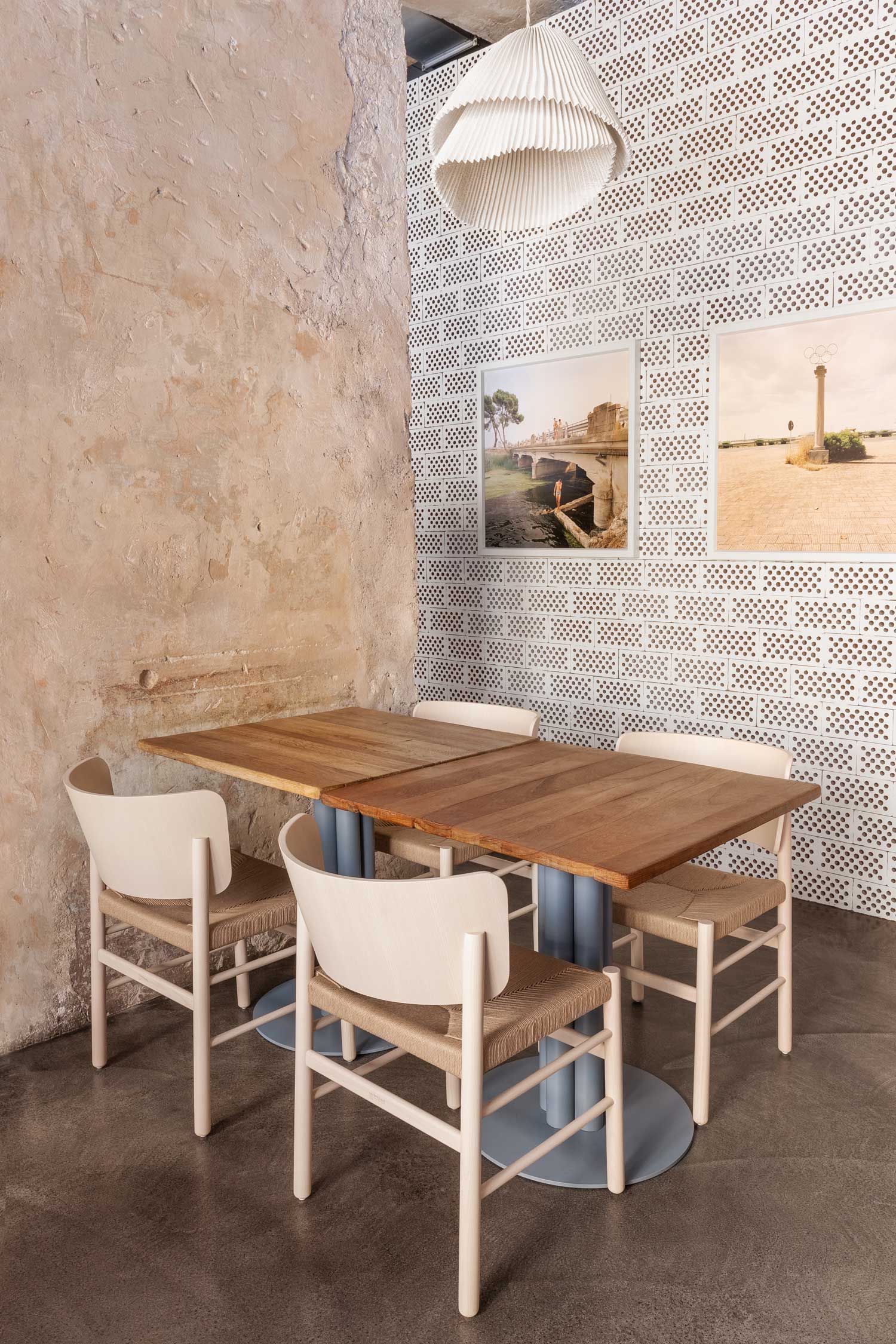 Having reached its 6th birthday, the owners of the celebrated Milanese restaurant felt it was the time to redesign the interior. The renovation needed to make the dining experience even more welcoming, without distorting the restaurant’s convivial and relaxed atmosphere and its stylistic ethos rooted in the concepts of authenticity, materiality, simplicity and local origin.

, now world-famous local designer and architect, was called upon to reinterpret the interior while maintaining the atmosphere the patrons have come to associate with 28 Posti – a place that is permeated with an identity that’s already been established, yet is somehow still evolving.

Materiality, texture and tone on tone colour are some of the key concepts Celestino’s intervention for 28 Posti are based, making use of and Matteo Brioni’s range of products. 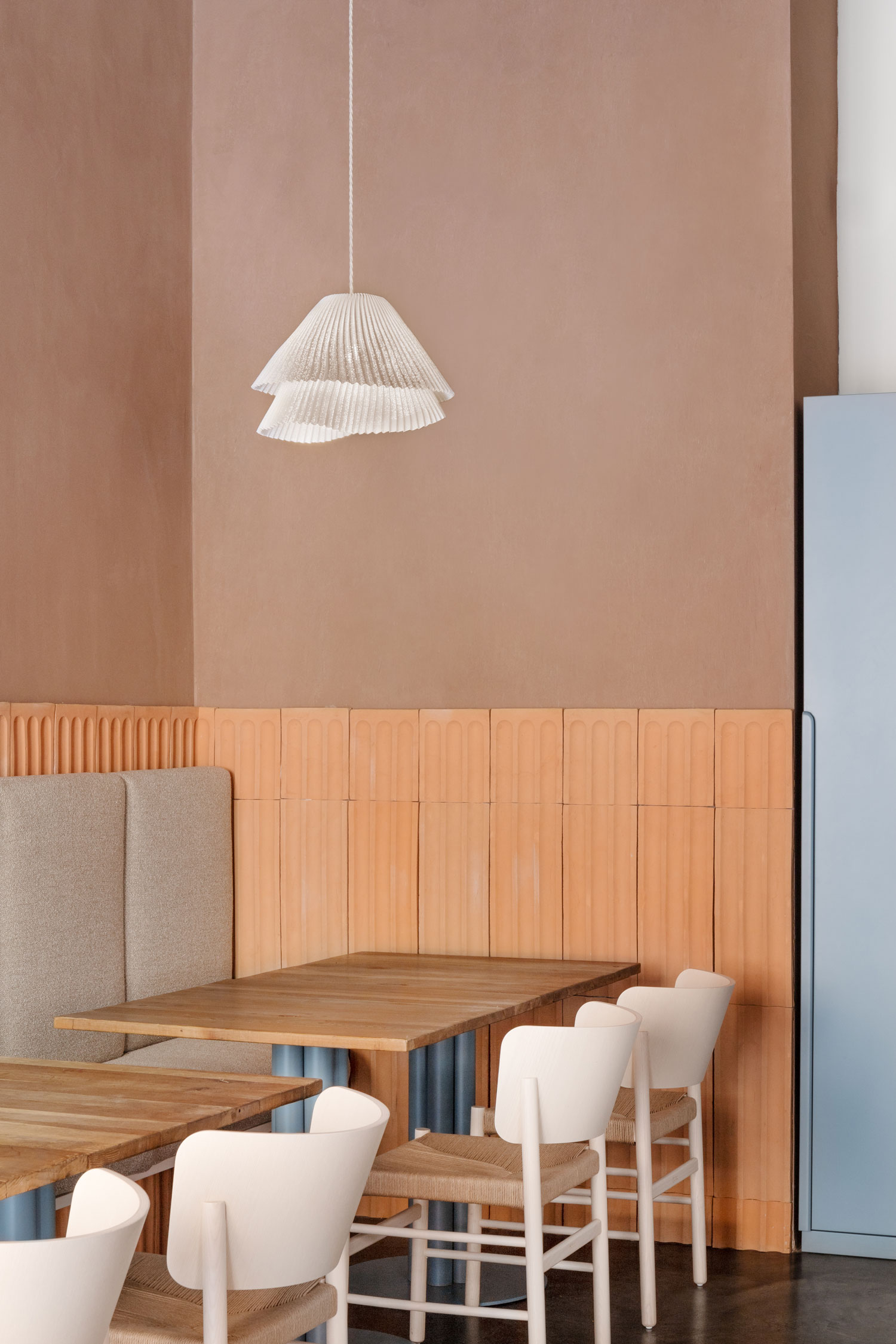 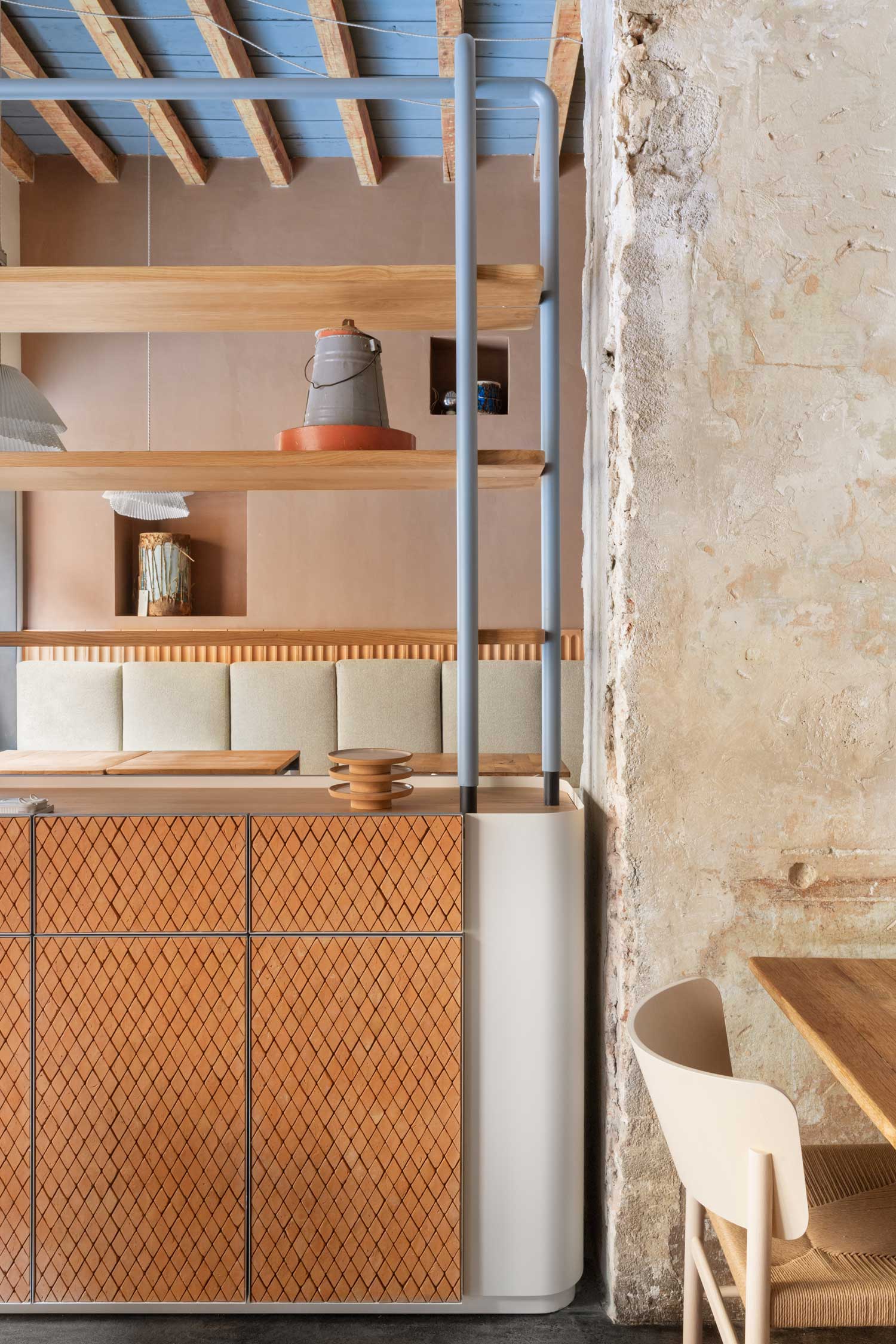 The overall palette plays with subtle colours and natural materials – timber in different finishes, terracotta tiles, natural waxed steel with an addition of soft powder blues, offset with chalk-white on the perimeter walls.

The Giulio Romano terracotta boiserie from the Gonzaga collection by Fornace Brioni clad¬ the walls of the short sides – together with Matteo Brioni’s unfired earthenware plaster that reaches the ceiling – while in the centre of the room, the original brick septum remains the protagonist. The wall separating the kitchen is also treated with a natural earth-based material plaster.

In the second room, an upholstered bench is set against the back wall, while the tables were redesigned to complete the renovated space and matched with Fratina chairs by Billiani, selected by the architect. A storage unit is positioned in the arch, deliberately detached from the wall, standing proudly on its own. Its rounded ends are enclosed by two curved sheets clad in micro-mosaic terracotta tiles. The upper part of the cabinet has visible timber shelves supported by a blue tubular frame, mirroring the style of the cabinet positioned on the threshold of the restaurant’s entrance. 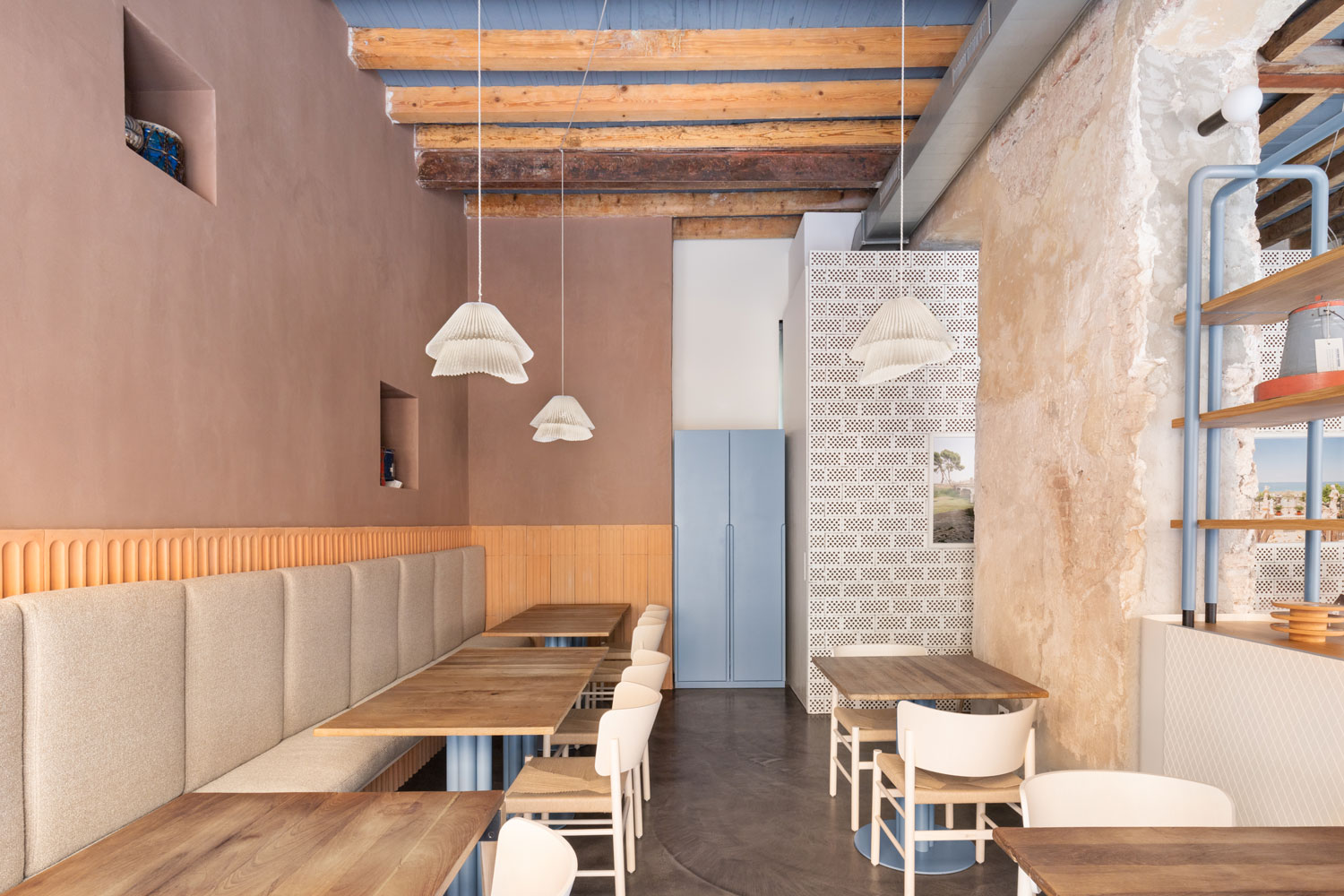 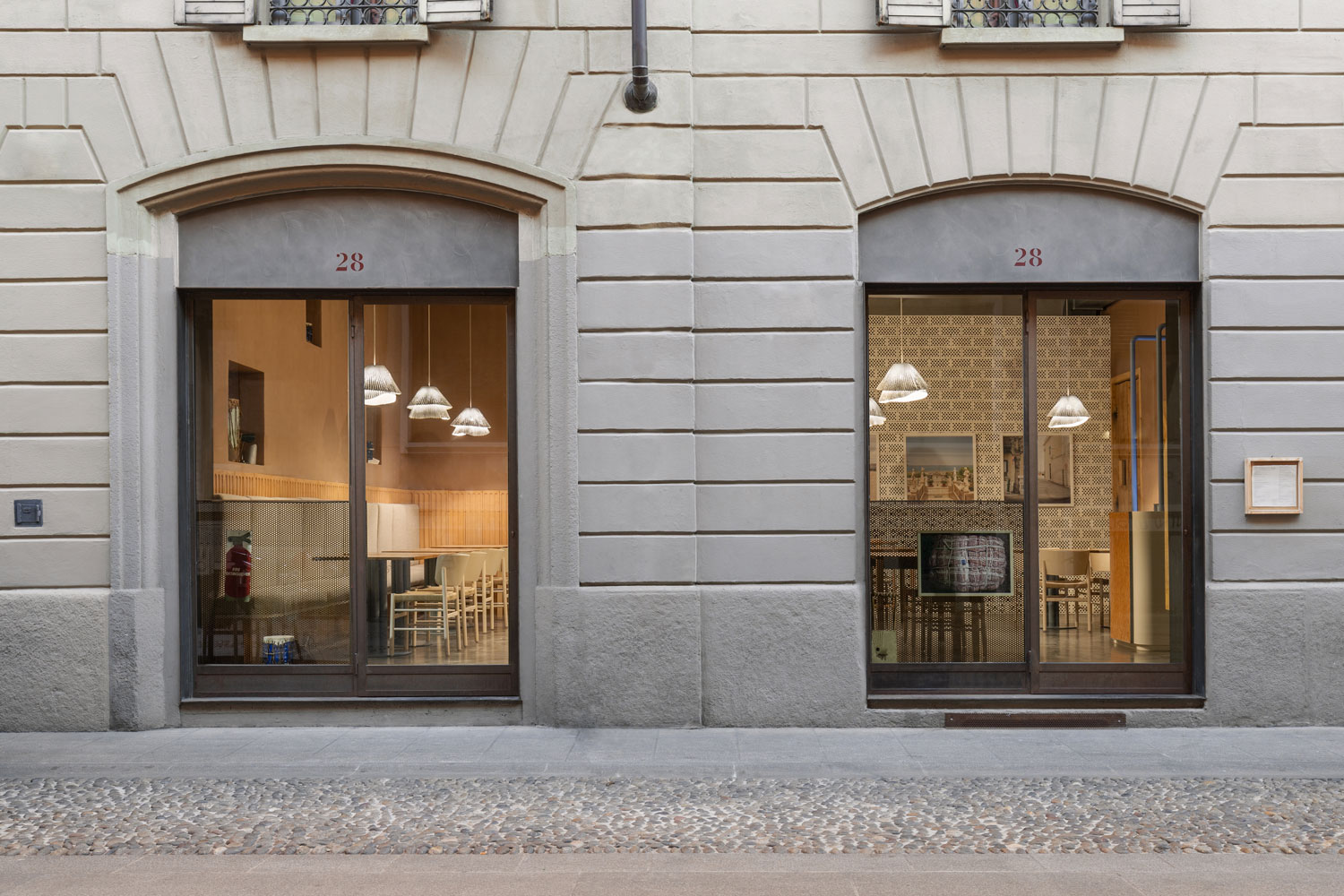 Suspended pendants in micro-perforated sheet metal are by the Spanish company , which appear as light as paper while displaying contrasting materiality and accurate workmanship catering to the attentive eye.

“The identity of the restaurant is now established, and my project deliberately wants to be in continuity with the imagination that the Milanesi associate with 28 Posti,” says Cristina Celestino. “The work plays on the concepts of authenticity, comfort, simplicity, origins, and aims to create a parallel between the interior of the restaurant and the kitchen of its chef Marco Ambrosino, the undisputed soul of the place.”