15 Summer Decorating Ideas For Your Home

Summer is full of colours and the scent of flowers. This is the time when we eagerly reach for plants to create decorations at home – to enjoy them also at work or in bad weather.

For summer, to stay in your home for a long time, choose plants that will stay in shape for a long time after cutting. You can create classic bouquets from them, but surprise your family and guests by reaching for more original ideas, e.g. floral curtains and choosing interesting dishes instead of typical ceramic vases. Floristic vials and sponges allow you to place cut flowers in paper casings or hang them on various sophisticated structures. 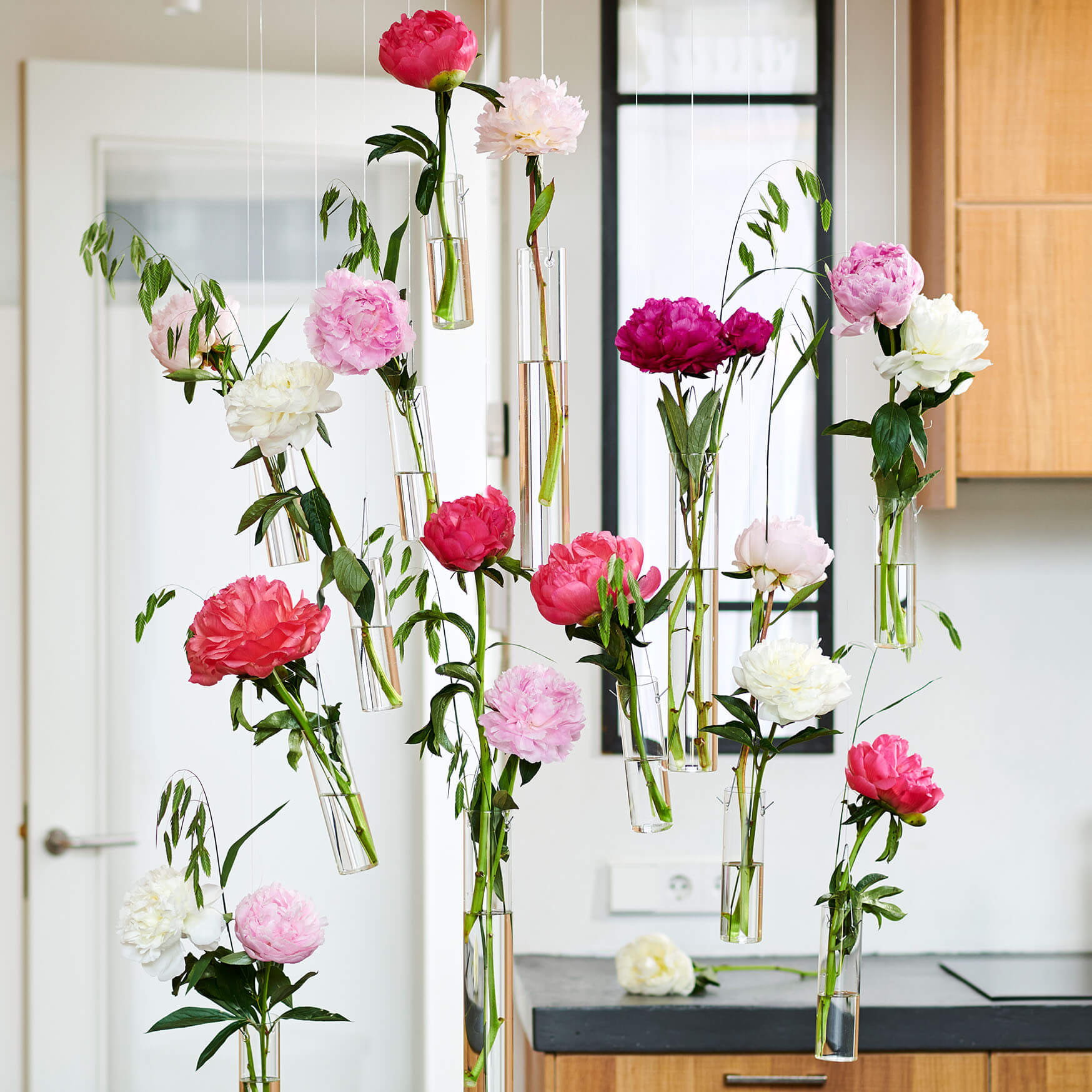 In early summer ( Paeonia ), blooming peonies smell so beautiful that you regret not enjoying them at home. Since peonies have pretty large, massive flowers, they can be successfully presented individually. Each flower with a few leaves looks phenomenal. This peonies curtain is a beautiful decoration that can be done in virtually any room. It is enough to hang a dozen or so floristic vials on thin lines at various heights and put one or two peony flowers in each of them. Green oat inflorescences will be a good addition.

Birch with flowers and fruit 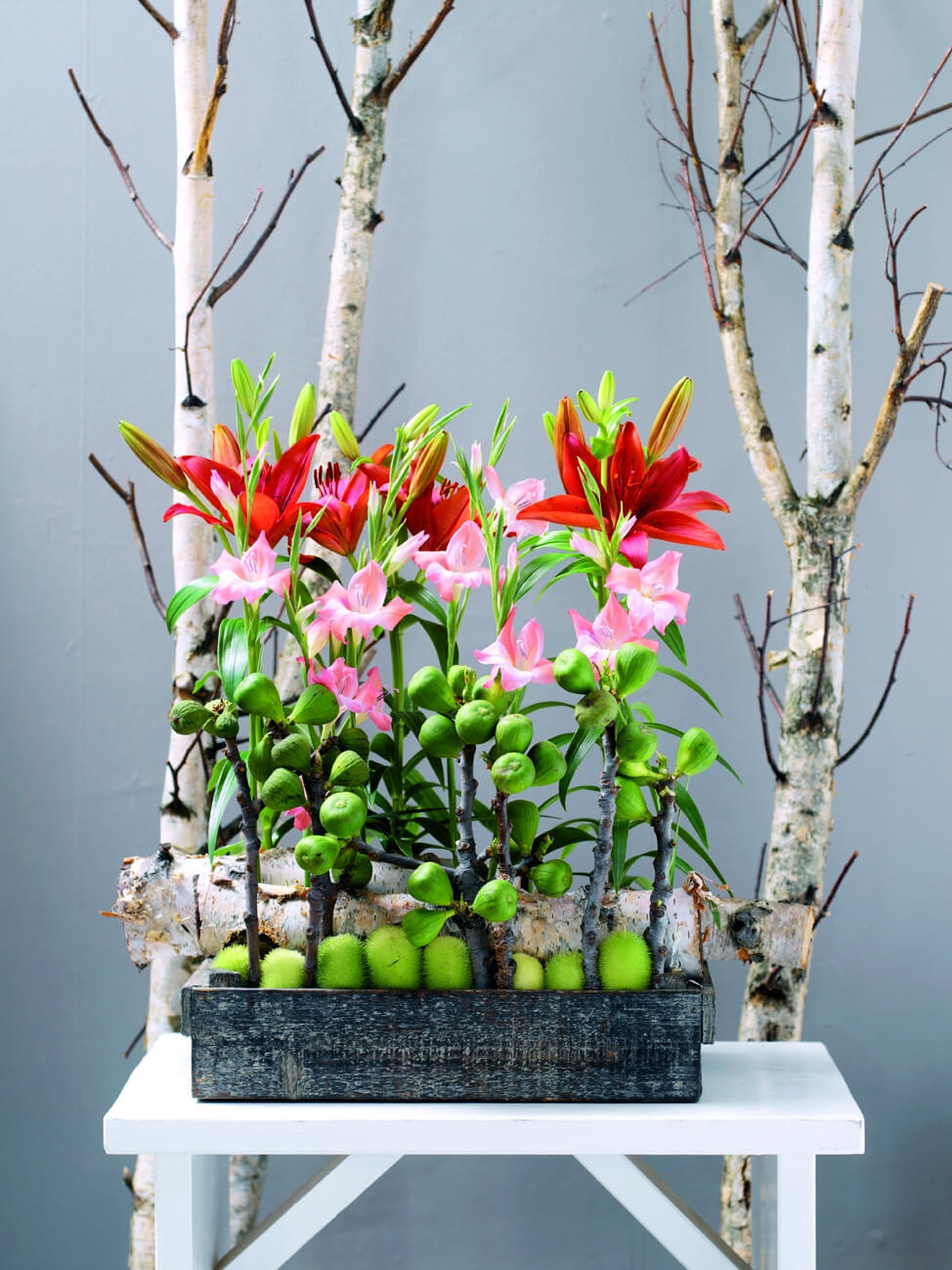 To make this decoration, you need two-branched, quite thick birch branches placed vertically on the sides of the flower table. On the table in a wooden box, in which a floral sponge is hidden, you can see pink and red lilies arranged in a row, which create a strong contrast with the white bark of birch branches. At the front, in a rather unusual way, twigs with ripe, green figs were displayed, under which a row of exotic spiny cucumbers ( Cucumis Dipsacus) was placed  – they can be replaced with fruits of a lobed colander of a similar appearance. 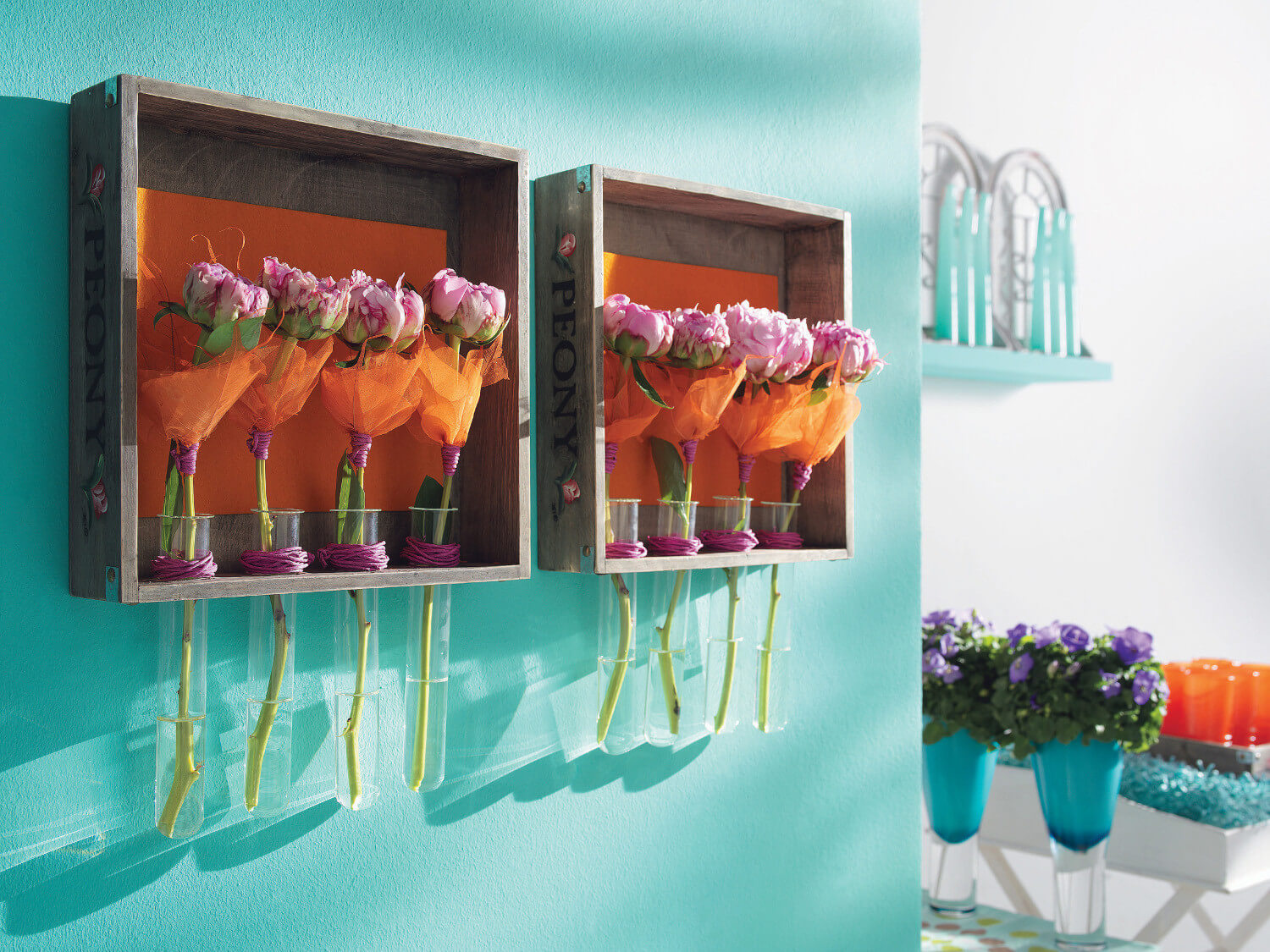 Wooden boxes can be successfully used to make a vivid picture with flowers. To make such a decoration, it is enough to drill holes in one side of each box, in which transparent vials for flowers can be placed. After hanging the boxes on the wall, place the vials in the holes, pour water into them, and put the flowers in. In this decoration, each flower has been wrapped in orange paper and tied with purple string. 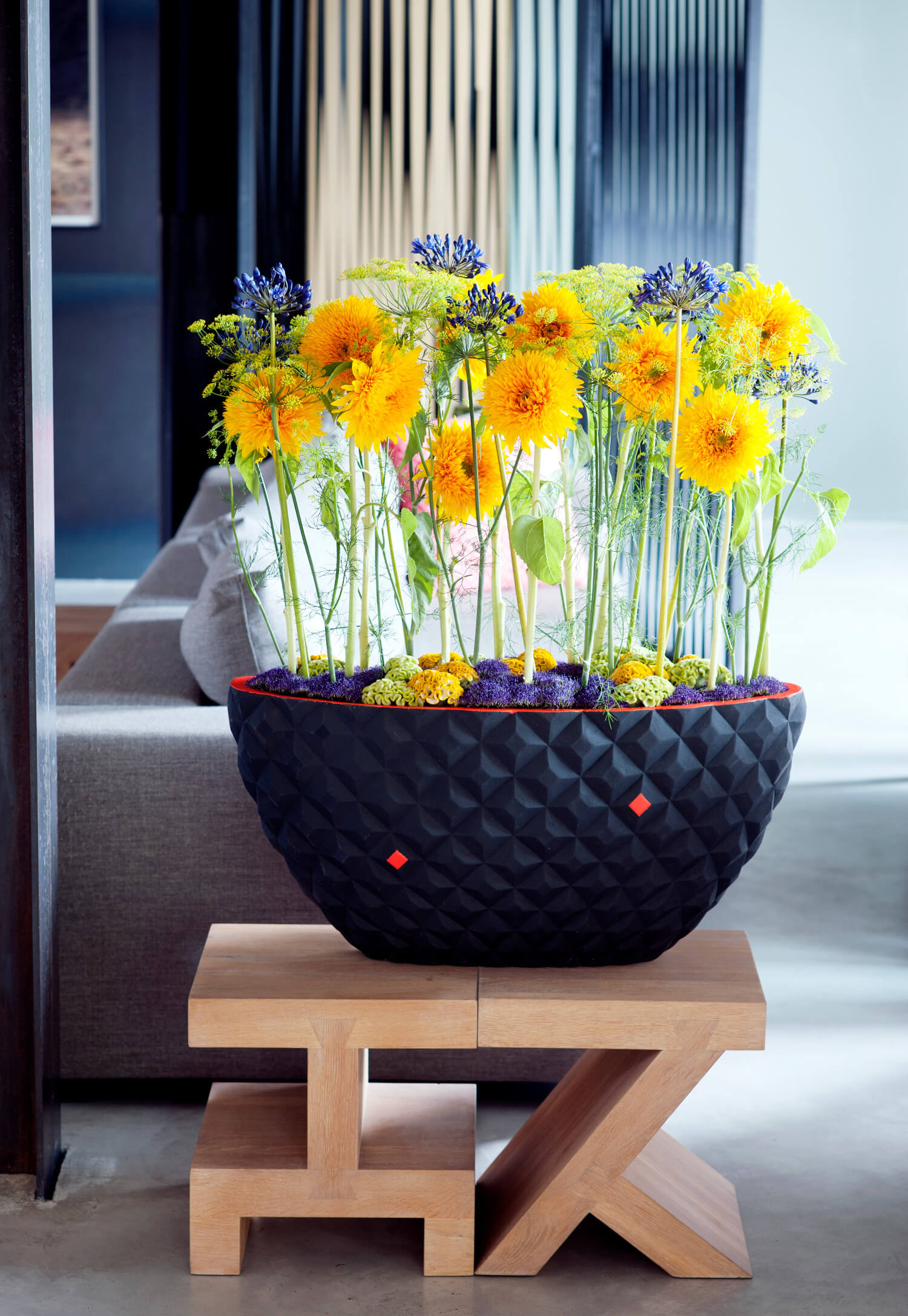 In this heavy, dark bowl, a light composition has been created that has two distinct layers. One is formed by tall flowers on stems devoid of most leaves ( sunflowers, dill flowers and ornamental garlic flowers ), and the other is created by tightly arranged flowers that form a colourful carpet. 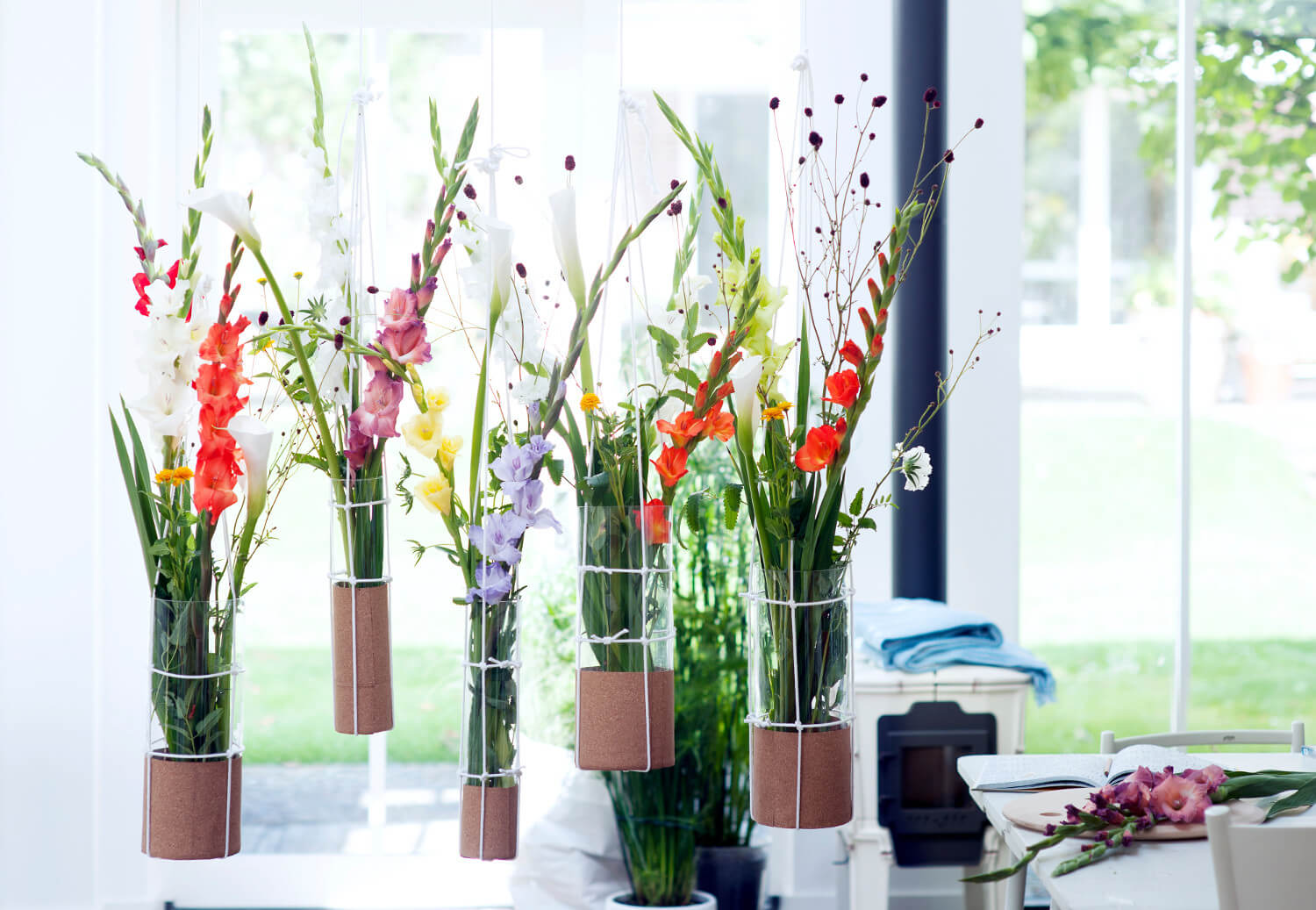 Gladiolus ( Gladiolus ) is a graceful flower that looks best in narrow vessels due to reach height. In this decoration, several gladioli differing in colour were used. To emphasize the beauty of each of them, they were placed in separate vessels with the addition of small flowers, creating a discreet background for them. 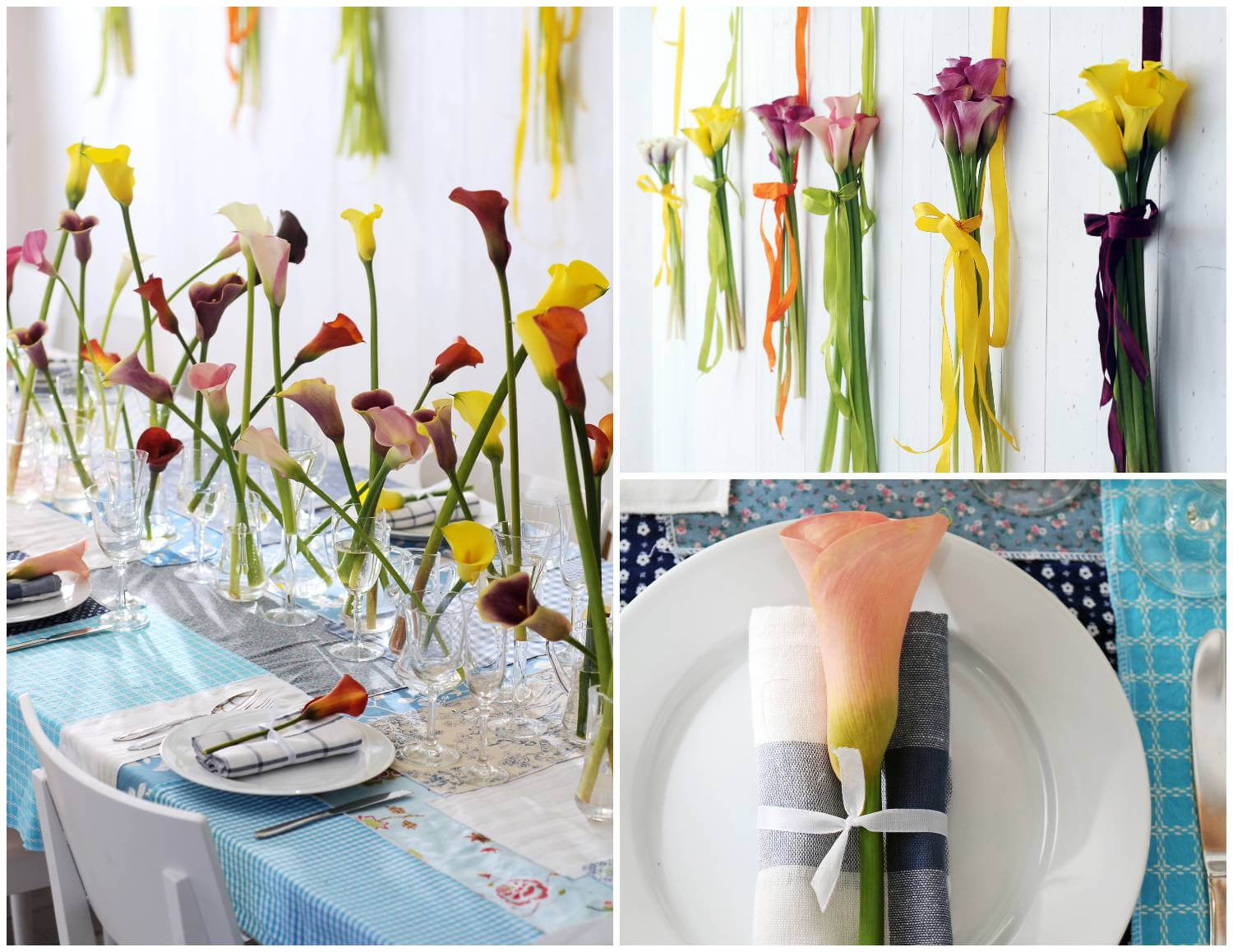 Multicoloured calla flowers were used for this floral decoration. A row of flowers of different heights and directed in different directions was placed on a narrow table so that each of the revellers could enjoy the beauty of the flowers. There is also a place for flowers on the wall – additionally decorated with ribbons. A pleasant accent is also the single flowers placed on napkins next to each cover. 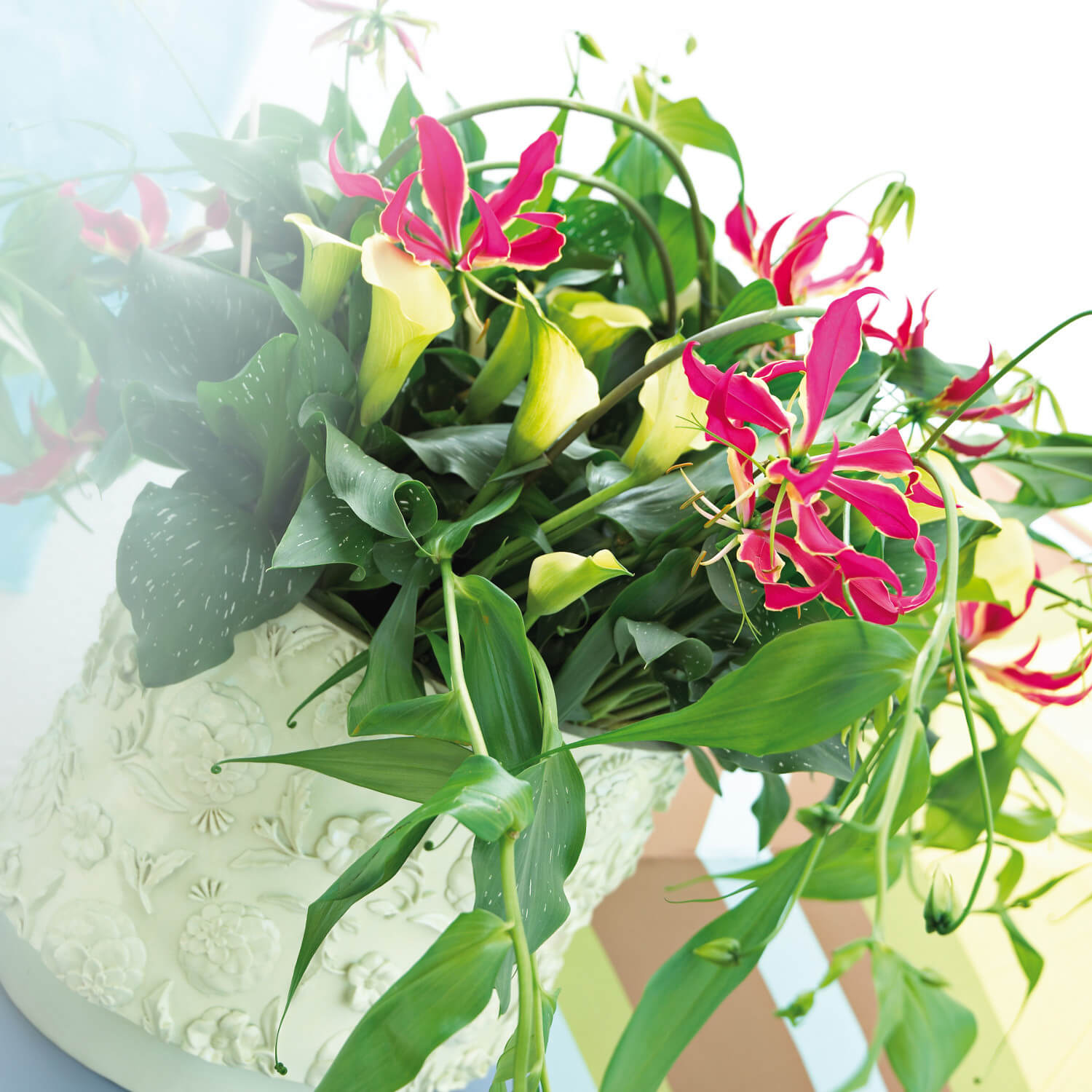 Glorias blooms all summer. This tropical plant has meandering shoots on which graceful flowers are set, composed of fancifully wavy, narrow petals. In this composition, in a stucco-decorated vessel, the only addition to glorious are Callas, which fill the empty spaces in the lower part of the composition. 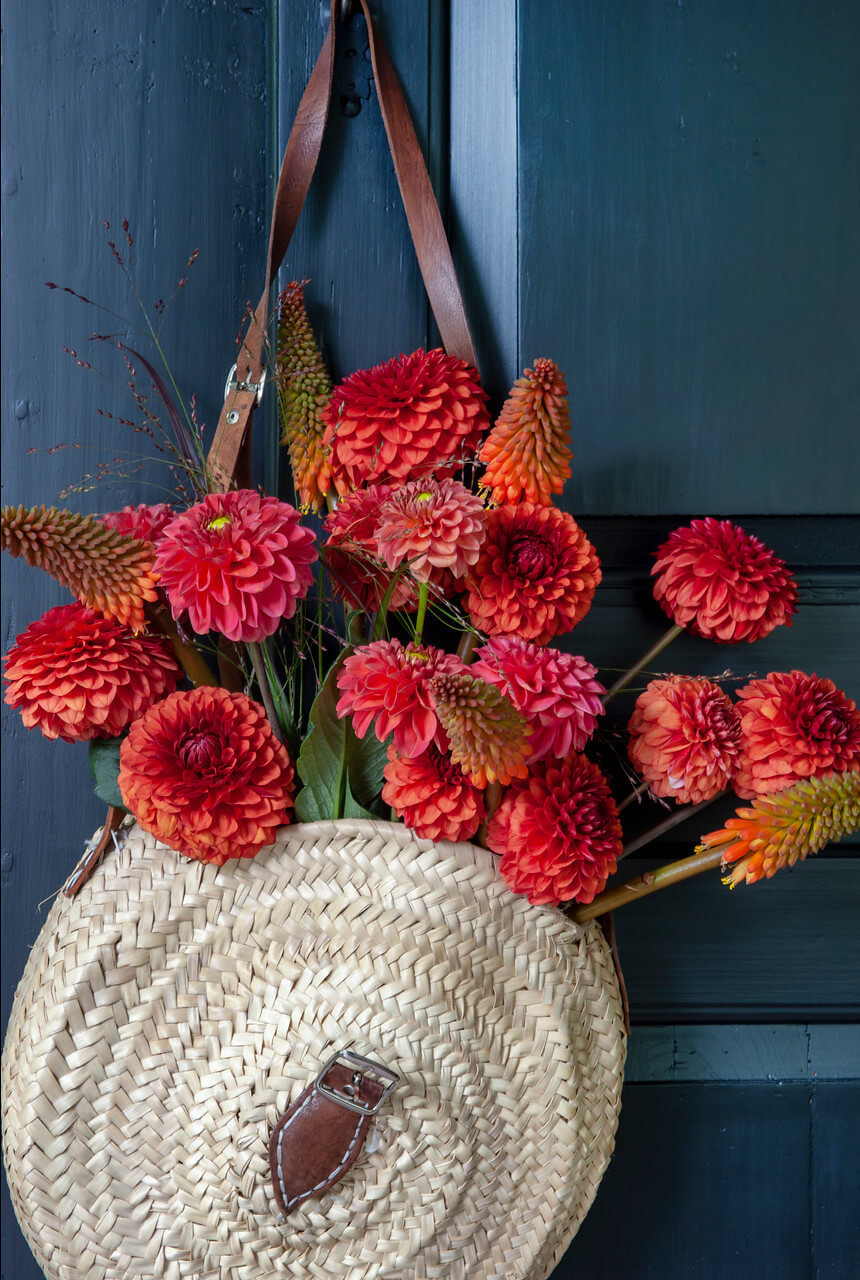 They have arranged as if at random, fiery orange dahlias and uniforms look as if they had just been collected and quickly put into a woven beach bag. Inside, the bag is lined with foil with a floristic sponge soaked in water.

A bouquet of wildflowers 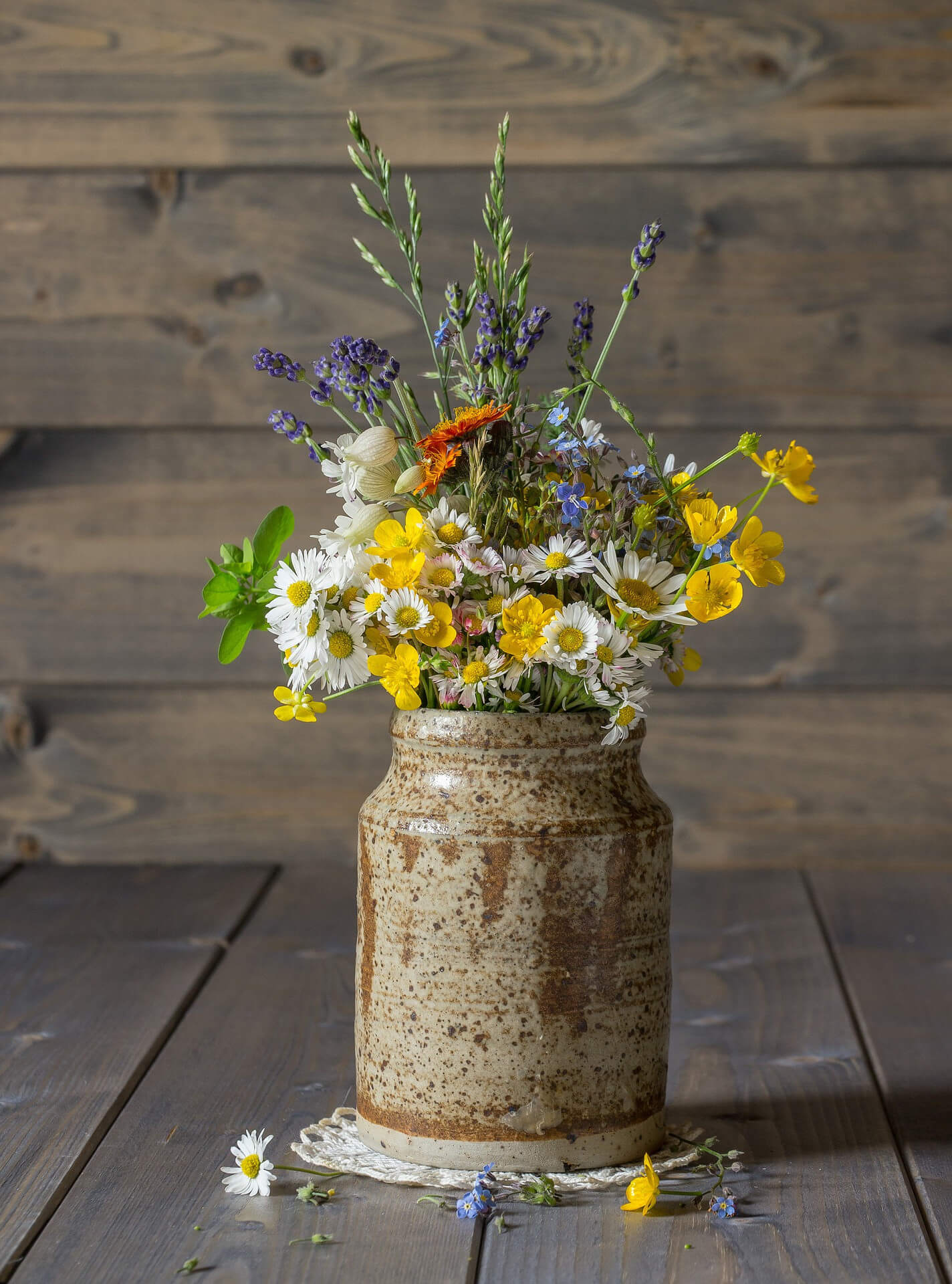 In July, a bouquet of delicate wildflowers and lavender blooming was placed in a heavy clay vessel resembling a milk bubble. The tallest and darkest plants are in the centre of the composition, and the bright (white and yellow) plants are around them. As a result, the dark ones are separated from the dark colour of the vessel. 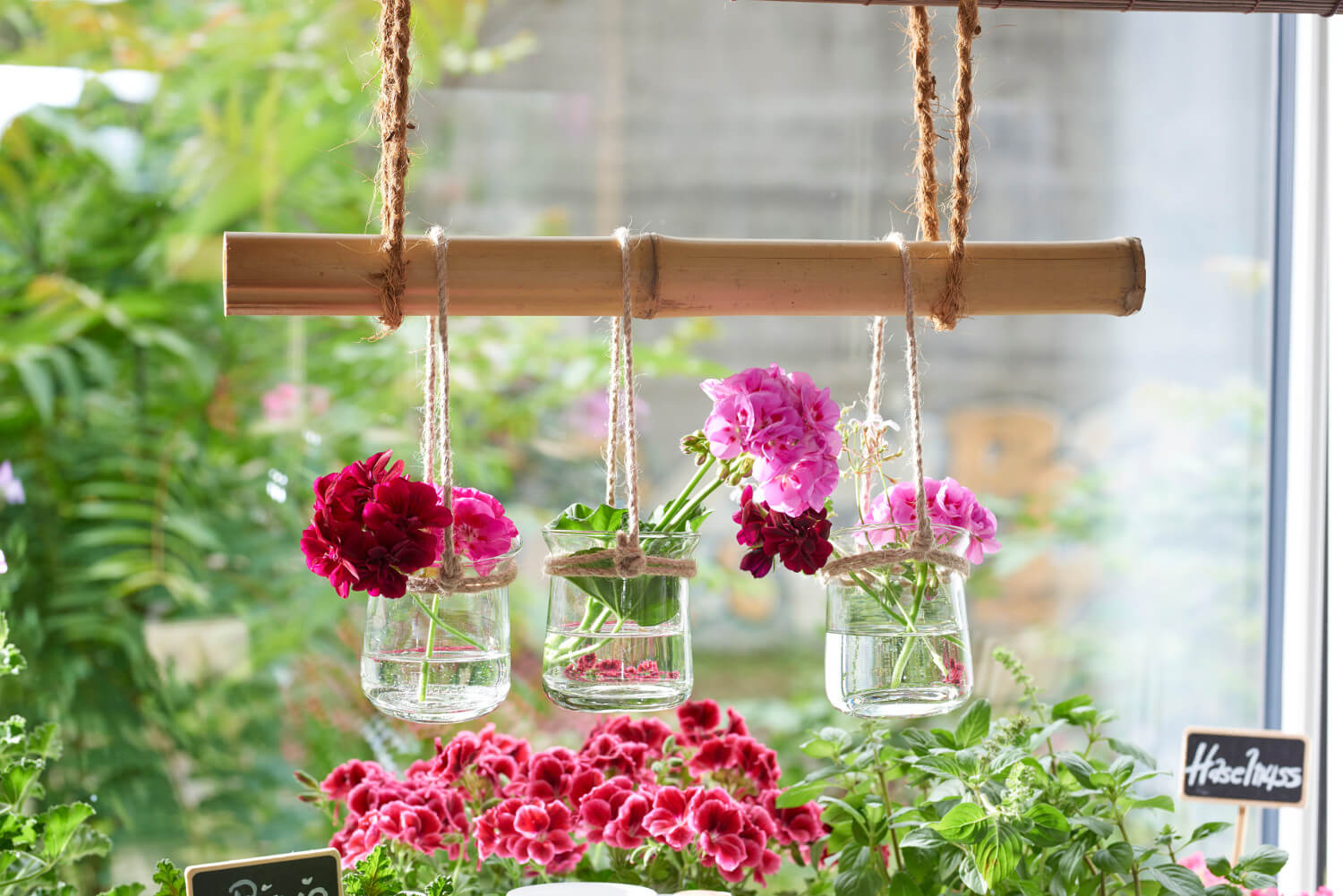 Geraniums are undoubtedly the queens of sunny balconies. But there are no contraindications to use them as cut flowers and bring some summer and colour into the house. This “swing” was made straightforwardly. Three glass vessels with a rim widening at the top are hung on a thick piece of bamboo.

Decoration for the table 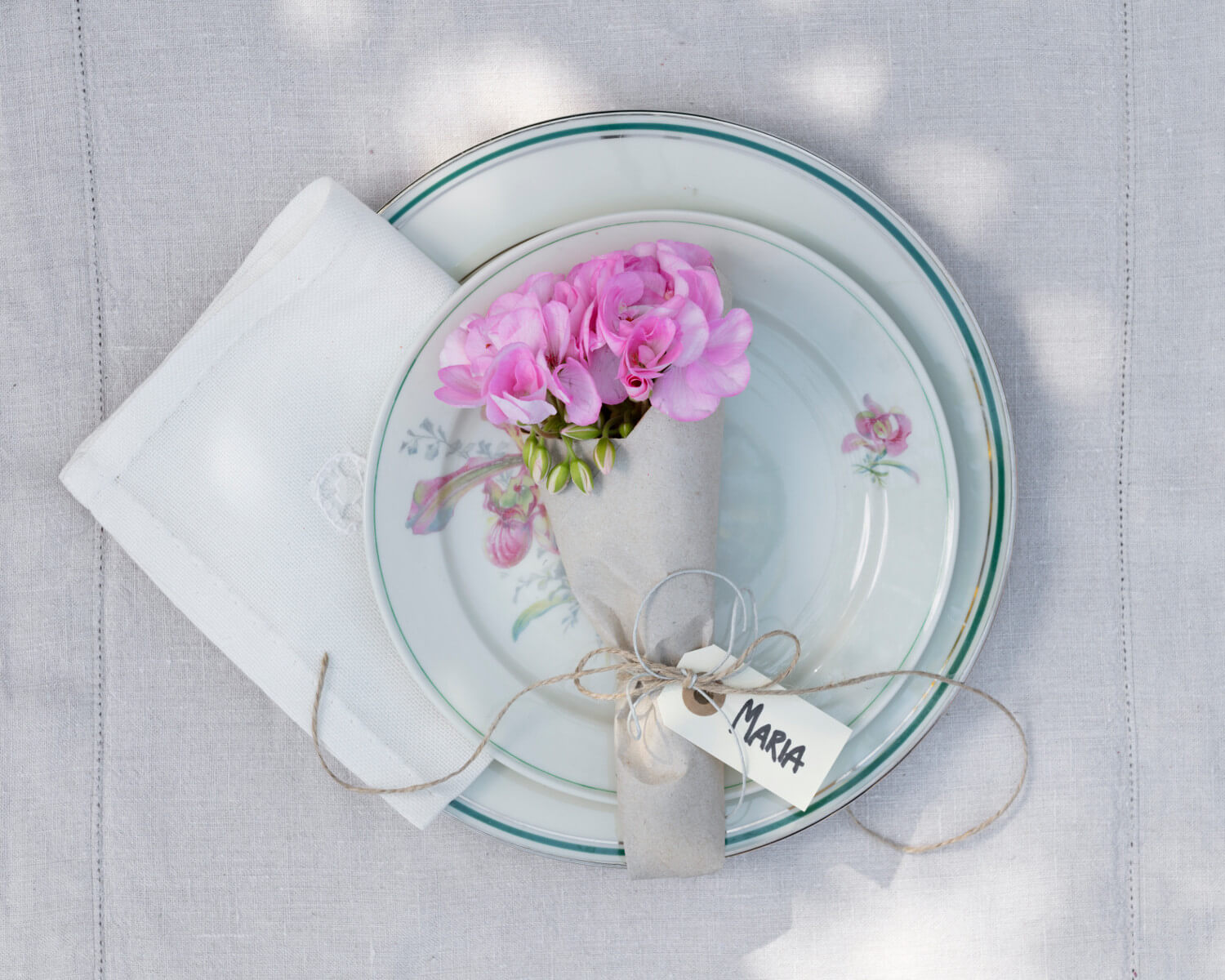 Single pelargonium flowers can be successfully used to decorate a place setting. This sprig of geraniums has been wrapped in grey paper and tied with a string to which a name tag is attached. Such a nice decoration will create a good mood at the beginning of the summer party. 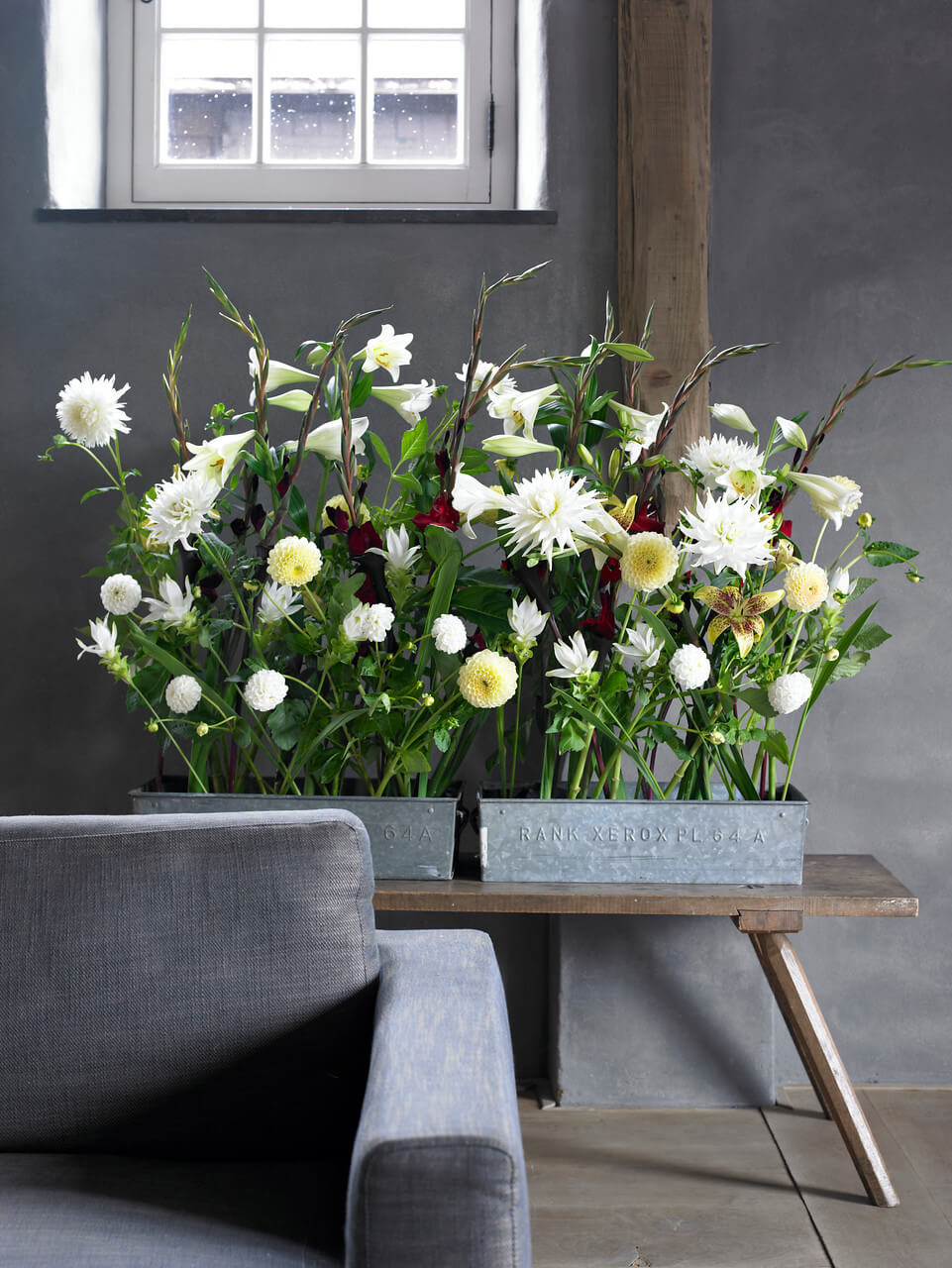 This mixture of summer flowers (mainly dahlias and lilies) in two metal boxes attracts attention, especially with its fresh white flowers. It brightens up a grey, dark, minimalist interior. In the form of dark gladioli, red is only a discreet addition that animates the entire composition. 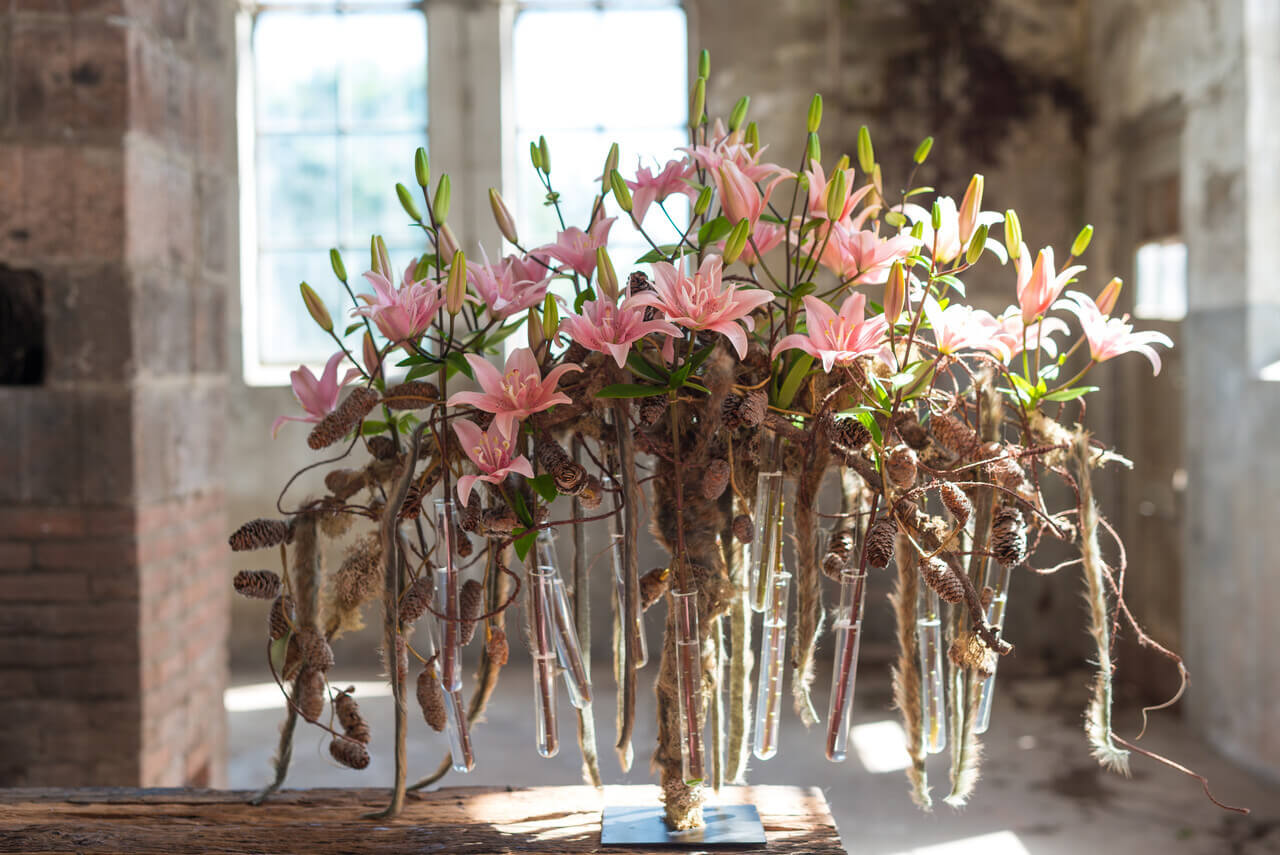 Pale pink lilies inserted into tiny floristic vials were suspended on an interesting arched structure resembling a large, branched old tree. The stem is a twisted trunk from which branches hang hanging with cones. Exciting combination of delicate flowers with dry, brown cones. 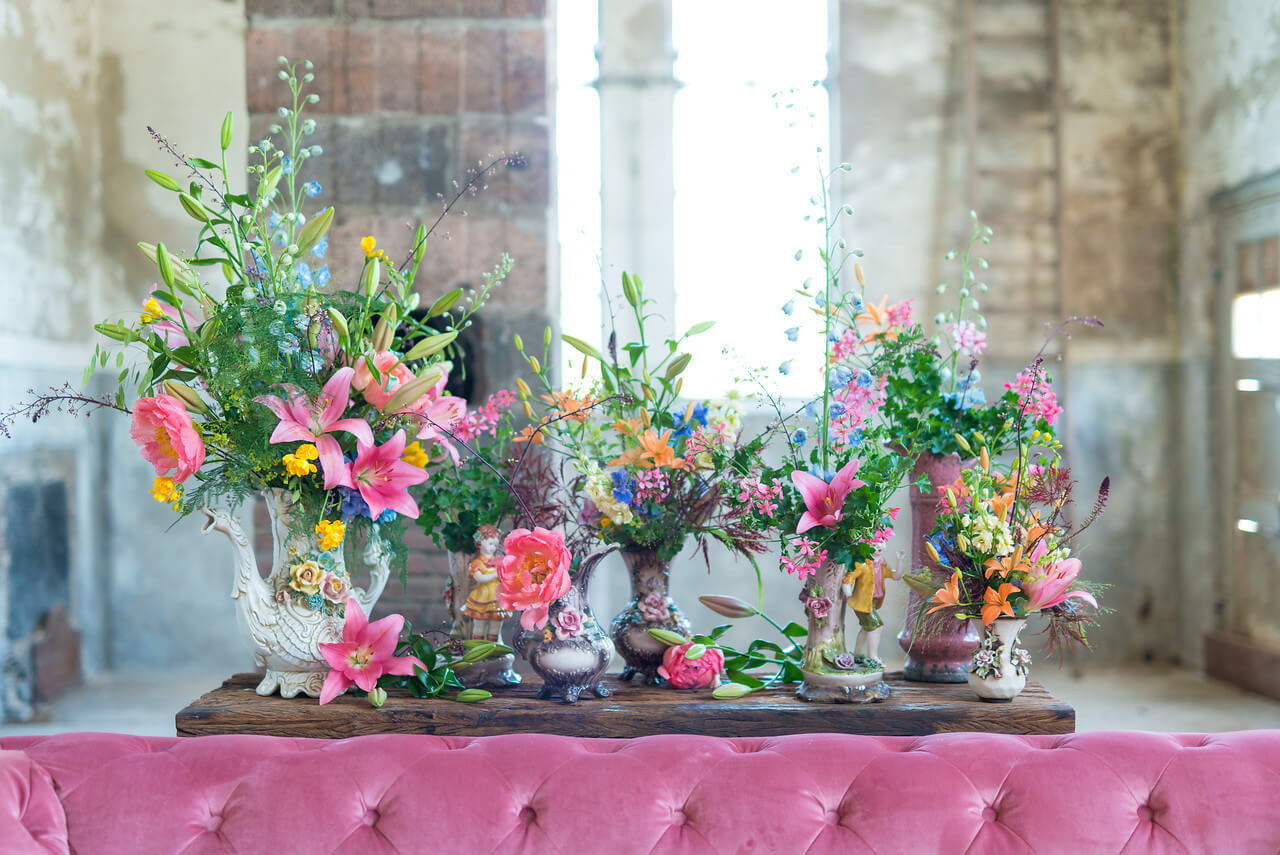 This colourful decoration in a baroque style is a mixture of various flowers. However, despite the apparent chaos, you can see that each bouquet is dominated by a few pink flowers, with blue, yellow and brick-orange flowers as additions.

In a sunny loggia 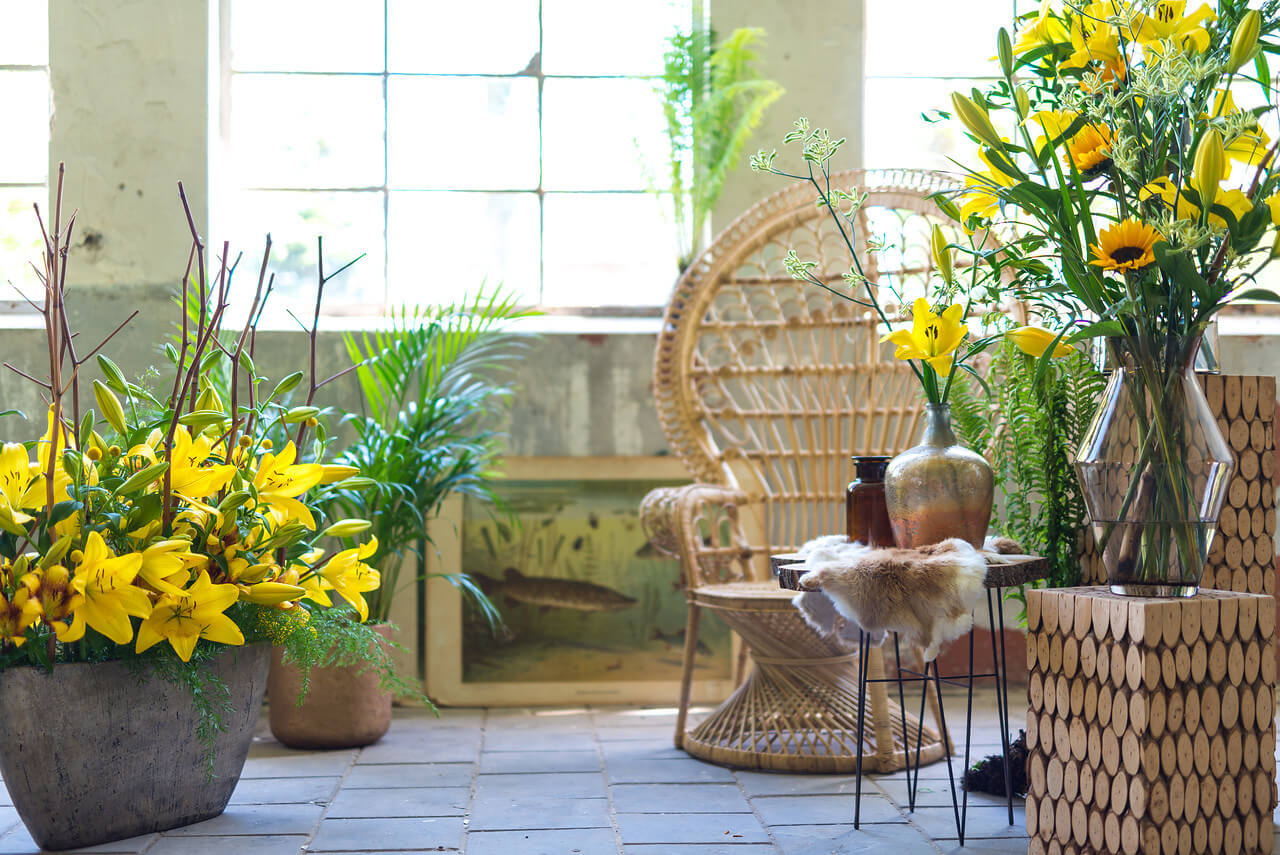 Two bouquets with bright yellow lilies and sunflowers add joy to this interior, while potted plants in the background make it feel tropical. Wicker, openwork armchair is a counterbalance to heavy floral compositions.